British troops fire their rifles at German planes on a bombing run over the beach at Dunkirk. (Cassowary Colorizations, via Flickr Creative Commons)

Editor's note: Have you ever wondered if the movie you just saw -- that claimed to be based on a real story or historical events -- was really accurate? So have we. With this year’s Oscars featuring historically based movies up for honors, we wanted to help you sort out the facts from the dramatic liberties. (We've also factchecked Darkest Hour and The Post.) Warning, major spoilers and plot points ahead!

To watch Christopher Nolan’s Dunkirk is to see one of the pivotal moments of World War II through the eyes of a handful of men. The bulk of the British Army, well over 300,000 men, is surrounded on the beaches of Dunkirk, France, and the best chance of stopping Adolf Hitler hinges on getting them home.

The movie shifts back and forth among three story lines: a young British soldier hoping for evacuation from the beach at Dunkirk, two Royal Air Force fighter pilots sent to stave off German planes that wreak havoc on the masses of awaiting troops, and a middle-aged man piloting his personal boat across the English Channel to the rescue.

It is perhaps the quietest battlefield film ever made, featuring relatively long stretches with only the sound of wind and walking. For visual beauty, it’s hard to beat.

Dunkirk isn’t crafted to tell history so much as make a slice of history come alive through a handful of invented characters. It plays up dramatic elements, such as the role of the private boats, and it paints the situation on the beach in the most dire terms possible. But set that aside, and it keeps faith with the other core facts.

• The troops really did line up on the beach, despite the bombs.

• The flotilla of small boats mattered, but less than what the film portrays.

• The British Air Force threw all the planes it could muster into the skies over Dunkirk to protect the troops on the beach.

• A strange tie between Dunkirk and one of the world’s worst shipping disasters.

In the movie: Troops stayed in tidy lines, fully exposed to German bombs and bullets.
In reality: They did.

In May 1940, the German advance through Holland, Belgium and France came faster than any defender had foreseen. In a span of about two weeks, German tanks outmaneuvered the Allied troops, cutting them off and forcing a desperate race to reform their lines as more and more territory fell to the Nazis.

In the days after May 22,  British — and French —  forces fell back to the French town of Dunkirk. The movie has them in orderly lines on the beach, fully exposed to strafing and bombing runs from the sky.

That is unquestionably accurate. This picture from the Imperial War Museum was taken some time between May 26 and May 29, 1940. The photographic record is  stark and clear. 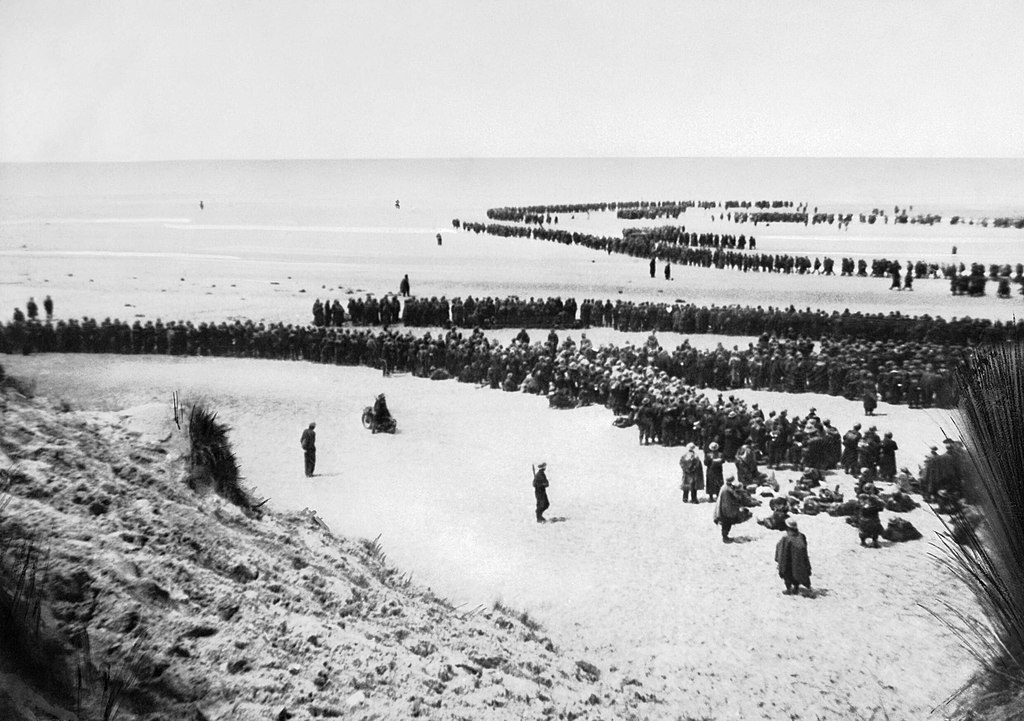 Larry Arnn, president of Hillsdale College, home of the Churchill Project, said discipline on the beach held throughout the evacuation.

"My father-in-law, Denis Houghton, left the beach on the last day," Arnn said. "His regiment, territorial artillery, was attached to the Coldstream Guards. He said they did exercise and drill every morning, as if they were in barracks at home."

The bombardment was also faithful to reality, as this photograph from the Imperial War Museum taken from an offshore ship captures. 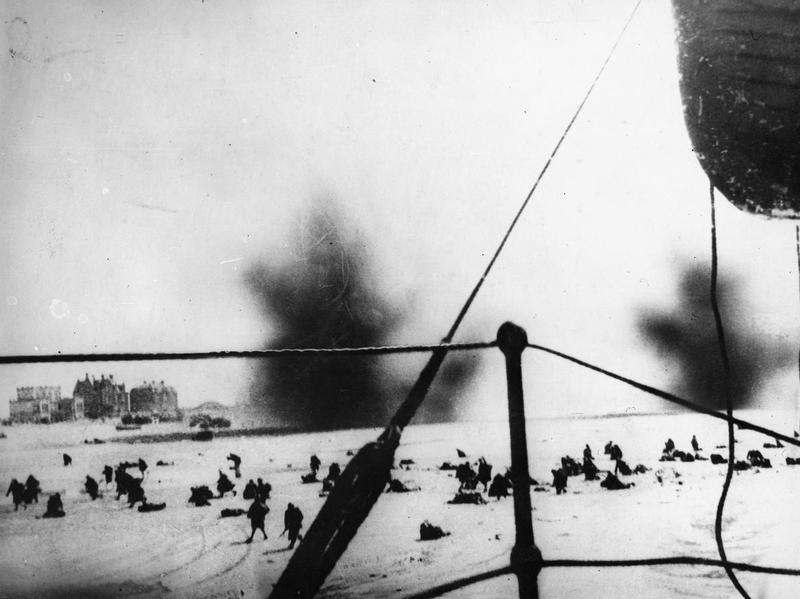 Troops under fire on the beaches of Dunkirk, as seen from a ship offshore. (Imperial War Museum)

In one dark moment in the film, a German submarine torpedoes a ship filled with troops. Whether from aerial bombardment or U-boats, that happened too. This picture shows the French destroyer Bourrasque sinking on May 30. 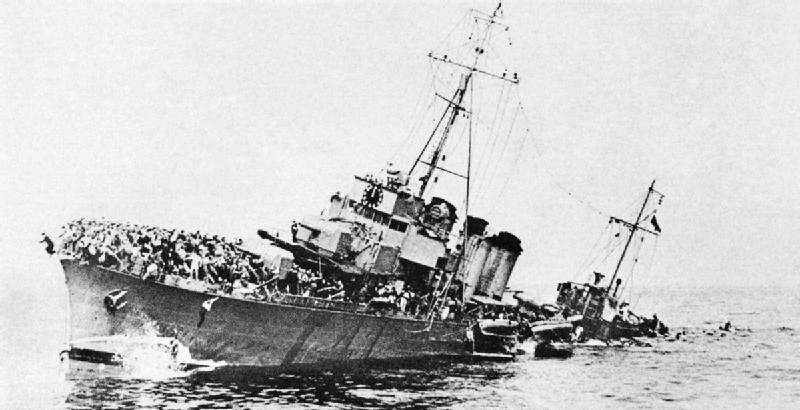 Soldiers leap from the Bourrasque in the waters off Dunkirk. (Imperial War Museum)

From waiting on the beach to sailing to England, the evacuation was fraught with danger, and the film is on firm ground in bringing that home.

In the movie: A brave private captain joins a flotilla of small craft and saved the day for hundreds of thousands soldiers stranded on the beach.
In reality: The boats were vital, but not in the way the film suggests.

If Dunkirk has one historic shortcoming, it is the outsized role it gives to the small boats that came over from England. Audiences would likely come away thinking that without the plucky average Brit, all would have been lost.

The fact is, there were hundreds of private craft, and they played an important role. But for the most part, neither the boats nor their owners did the heavy lifting.

About 338,000 British, French, Belgian and Dutch troops made it safely from Dunkirk to England, and over 90 percent came aboard large Navy ships. By the time the public learned about the evacuation, a few days after it started, about 126,000 troops had already arrived.

Nearly all the private ships had been commandeered by professional seamen, wrote historian Duncan Anderson at the Royal Military Academy at Sandhurst. They mainly ferried men from beaches to large ships waiting just off shore. But, Anderson said, "the newspapers were not interested in the reality."

"The Times devoted an editorial to civilians, including women who, by donning trousers and tucking their hair under caps had passed themselves off as men, had sailed their own river craft over to Dunkirk, and brought soldiers back all the way to England," Anderson wrote for the BBC in 2011. "The story of the small boats was soon enshrined in British popular consciousness, an example of a people coming to the rescue of their army."

In the movie: Britain held back planes to protect troops exposed on the beach.
In reality: Britain committed all the planes it could muster, sending more than 2,700 fighter sorties.

There are moments in the movie that give the impression that British strategists held back most of their air force to save it for the defense of Britain. In truth, the air force was stretched thin, but that primarily was due to the limited number of planes and pilots, not a strategic decision to hold planes in reserve.

Early on in the movie, after a German bombing run on the men exposed on the beach, a soldier cries out, "Where’s the bloody air force?"

Later, there’s this exchange between an Army colonel and the Navy commander of the evacuation. (The mole is the breakwater that stretched out from the beach and was a major boarding point for the troops.)

Commander Bolton: "There’ll be one soon."

Bolton: "After yesterday’s losses, it’s one ship on the mole at a time."

Winnant: "The battle’s here, what’re they saving them for?"

Bolton: "The next battle. The one for Britain. Same with the planes."

We note that 933 ships took part in the operation, hardly a limited effort. As for the air force, while they were outnumbered and took heavy losses, there is no hint that the military held back.

According to an official history of the operation, the orders to the British Air Marshal were to "ensure the protection of the Dunkirk beaches (3 miles on either side) from first light until darkness by continuous fighter patrols in strength."

Altogether, the Royal Air Force flew 2,739 fighter sorties and 651 bombing raids. British forces downed about 260 German planes, while losing 106 of their own aircraft.

A quibble and a twist

The movie finds tension by creating a lifeboat mentality where it’s every man for himself and a handful of British soldiers see no reason to help a French soldier who is caught in the same dilemma as they face. That friction might have existed, but it’s important to remember that French forces held the line against the German forces and the tens of thousands who were evacuated at the end were greeted warmly on their arrival in England.

In a quirk of history, the likely source of the film version of the small boat Moonstone and its intrepid captain is the real life Sundowner and its owner Charles Lightoller. University of Illinois historian John Lynn noted that Lightoller had very much been in the news long before Dunkirk. He was second mate and the most-senior surviving officer on the Titanic.