The tax bill that President Donald Trump signed into law on Dec. 22, 2017, was a large and consequential piece of legislation. It was also the culmination of no fewer than nine of Trump’s campaign promises. So how did he do?

Upon review of the bill’s provisions, we found only one pure Promise Kept in the bill, compared to four we rated Promise Broken. But he made significant, if imperfect, progress on four other promises, and we’ve rated these Compromise.

Here’s a rundown, with the promises grouped by our rating.

Some companies store income overseas -- rather than bringing it home -- for fear of incurring relatively high U.S. tax rates.

During the campaign, Trump said his tax plan "will provide a deemed repatriation of corporate profits held offshore at a one-time tax rate of 10 percent."

Under the new law, U.S. businesses holding assets overseas would be allowed to repatriate those assets at 8 percent, or 15.5 percent for liquid assets. That's different than the 10 percent rate Trump had promised, but one of the two rates is actually lower than that -- 8 percent. So we rated it Promise Kept.

Cut taxes for everyone

During the campaign, Trump said that "everybody is getting a tax cut, especially the middle class."

As it turns out, every income group on average would pay less in taxes in 2019, according to a nonpartisan analysis of the final tax bill by Congress' Joint Committee on Taxation. And at least early on, there will be far more winners than losers within every income group.

Over time, however, these broad-based tax cuts dissipate due to the sunsetting of some key tax credits and a change in how inflation is calculated. By 2027, according to the Joint Committee on Taxation, every income group below $75,000 will actually see a tax increase.

So the new law -- at its start -- does come close to providing tax relief for all income groups, and for most members within each income group. But it's doesn't give a tax cut to "everybody," and by 2027, most taxpayers, including those in the "middle class," will actually be paying more than they would have under the previous law. We rated this a Compromise.

During the campaign, Trump said his plan "will lower the business tax rate from 35 percent to 15 percent, and eliminate the corporate alternative minimum tax."

The bill did reduce the corporate tax rate dramatically, but it didn't hit the 15 percent target Trump had proposed. The new rate is 21 percent.

The final figure is two-thirds of the way down to where Trump had wanted it, so we rated this a Compromise.

The estate tax comes into play when someone dies and the estate is large enough to qualify for the tax. Under existing law, it essentially affects only individuals and families with significant assets -- for 2017, estates worth less than $5.49 million are exempt from the tax.

During the campaign, Trump pledged that "no family will have to pay the death tax."

The new law keeps the estate tax in place but increases the amount that can be shielded from taxation. Under the new provision, the tax will affect estates of at least $11.2 million, or $22.4 million for couples. The provision is poised to sunset after 2025.

This is a significant limitation of the estate tax’s reach, but it's not all the way to the elimination that Trump had promised. So we rated it a Compromise.

A "marriage penalty" occurs when two individuals end up paying more when they are married then they would have if they had both been single. This quirk stems from having different tax brackets for individual filers and married couples.

While the tax bill didn't eliminate the marriage penalty, many fewer taxpayers would face it for regular taxable income. We rated it a Compromise.

Trump promised to "rewrite the tax code to allow working parents to deduct from their income taxes child care expenses for up to four children and elderly dependents,"

The bill passed by Congress did not significantly overhaul existing child care provisions in the tax code. Instead, it increased the per-child credit. Under the bill, families will get additional child tax credits, and a portion will be refundable for households that do not earn enough to pay taxes.

This is an imperfect tool for addressing child care costs. The new child credits will be partially offset by another provision of the new bill -- the disappearance of the personal and dependent exemption. And the child credit isn't targeted towards parents who need to pay for child care -- many parents who benefit from the credit may have no child care expenses at all.

The changes in the tax bill aren't what Trump had promised. We rate this a Promise Broken.

Cut the number of tax brackets

We rated this a Promise Broken.

Trump said that under his tax plan, "we will eliminate the carried interest deduction and other special interest loopholes that have been so good for Wall Street investors, and for people like me, but unfair to American workers."

Carried interest refers to the profit earned by the general partner of a private investment fund. That income is treated as a long-term capital gain, which is taxed at a lower rate than ordinary income.

An elimination of the carried interest provision was not included in the bill.

"We would have cut carried interest," Cohn told Axios co-founder Mike Allen. "We probably tried 25 times." But he said the administration "hit opposition in that big white building with the dome at the other end of Pennsylvania Avenue every time we tried. It is just the reality of the political system." We rated this Promise Broken.

The alternative minimum tax is levied on higher-income households that take a lot of deductions, to ensure that they pay at least a minimum amount of tax. 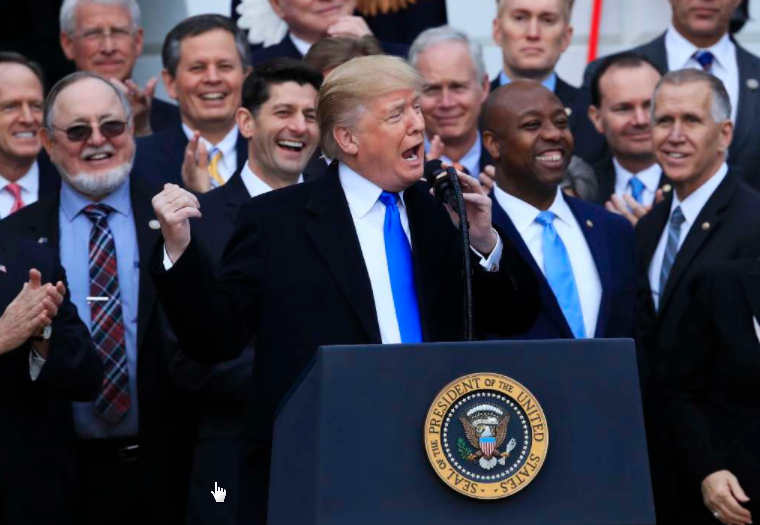