Taking the measure of the federal workforce under Donald Trump

Politicians have often painted the federal workforce as a drag on the federal budget and burden for the taxpayer. Look no further than President Ronald Reagan, who famously said, "The nine most terrifying words in the English language are, 'I'm from the government and I'm here to help.’ "

During his presidential campaign, Donald Trump picked up on the frequent political theme of an overstuffed, inefficient bureaucracy. He promised to impose a hiring freeze on all federal employees to reduce the federal workforce through attrition, with exemptions for military, public safety, and public health positions.

Depending on how you crunch the numbers, the federal workforce is either the largest single employer in the country or a close second to WalMart. The workforce includes park rangers, NASA astrophysicists, federal prosecutors and agricultural extension officials.

All told, the size, scope and nature of the federal workforce is often misunderstood. We dove into the data to try to provide a greater understanding.

Employment in the U.S. Postal Service and the rest of the civilian government have been fairly constant over the years.

That leaves the military as the biggest factor in shaping the size of the 4 million-plus official federal workforce. 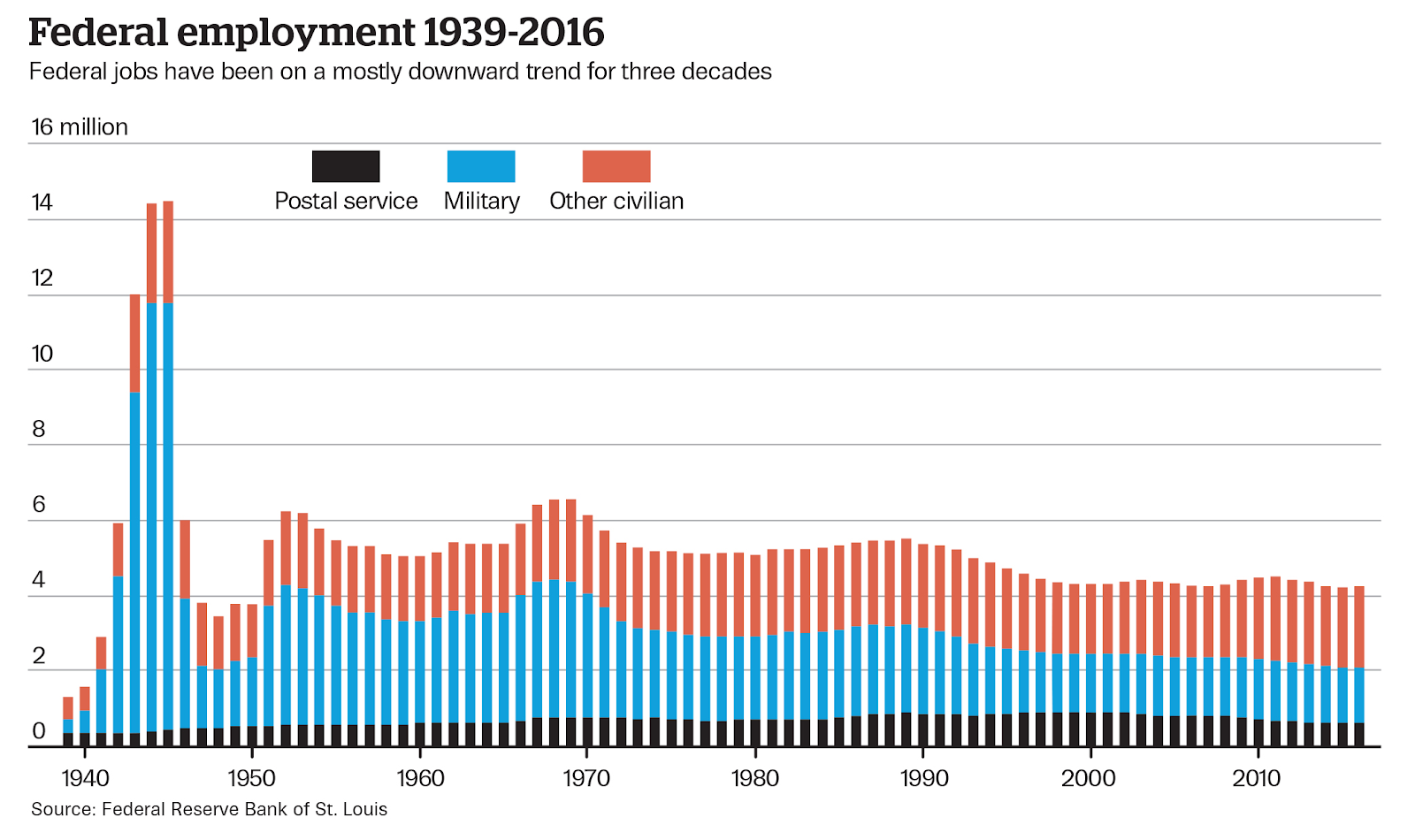 Federal employment soared during World War II and underwent more modest spikes during the Korean War and the Vietnam War. Once the all-volunteer military was established after the Vietnam War, the the number of military personnel has generally shrunk, a trend that accelerated with the end of the Cold War.

As a result, total federal employment including the military has declined pretty consistently for almost 30 years.

"Defense was the biggest loser," said Paul Light, a professor of public service at New York University. "Civilian federal employees at the Defense Department were a nick over 1 million in 1990, but only 700,000 today."

The winners for an increased workforce include the departments of Justice, Homeland Security and Veterans Affairs, which has seen the largest gains, Light said.

In the early and middle part of the 20th century, many federal jobs were clerical and required few specialized skills. The federal government has retained lower-skill jobs, though many positions today require high educational attainment and specialized training.

The numerical comparison shows a workforce that has remained largely steady since the mid 1990s.

"In the big picture, the size of the federal government hasn’t changed all that much," said Mallory Barg Bulman, vice president for research and evaluation at the Partnership for Public Service, a nonprofit that focuses on challenges facing the federal workforce.

When framed against the total U.S. population, however, that has meant an ever-smaller ratio of federal workers to the population as a whole. 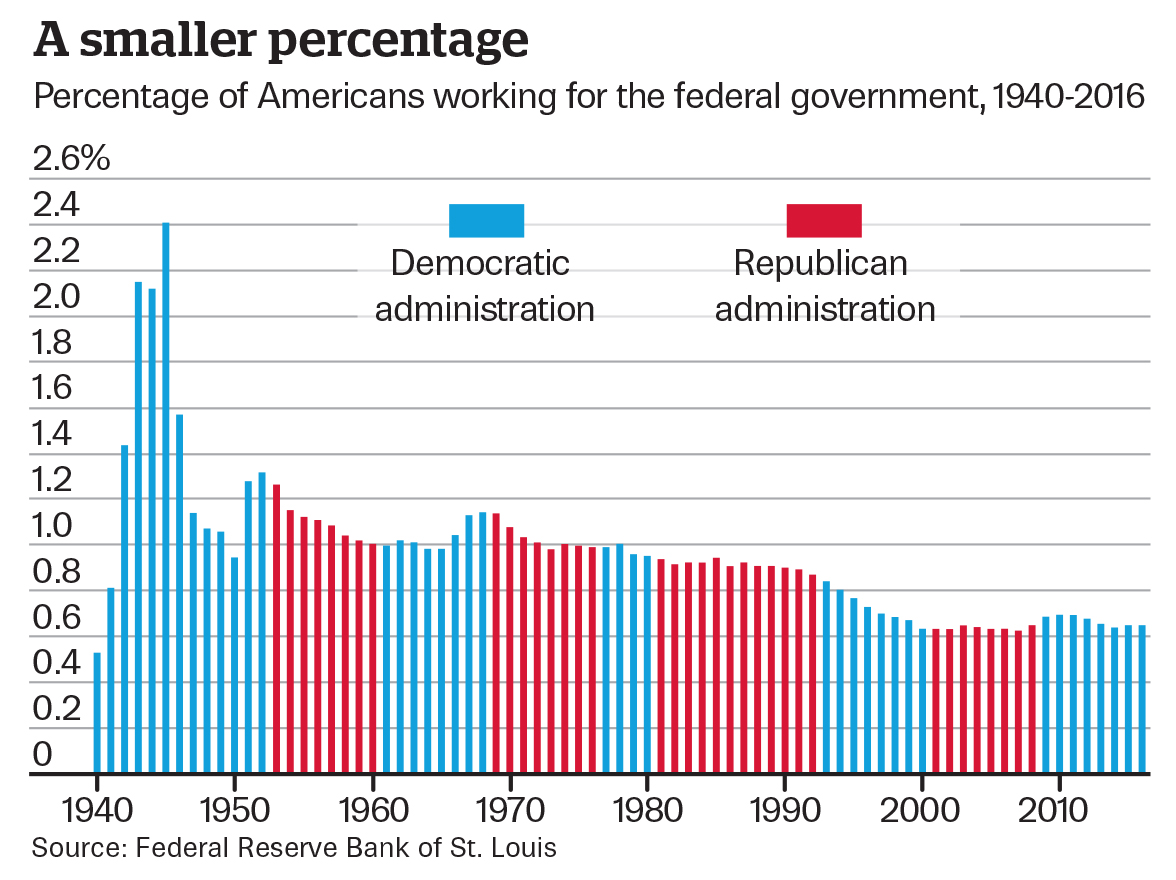 Specifically, with the exception of some brief upticks, the percentage of the nation’s population working for the federal government has declined by almost half since about 1970. That’s occurred under both Republican presidents (in red) and Democratic presidents (blue). 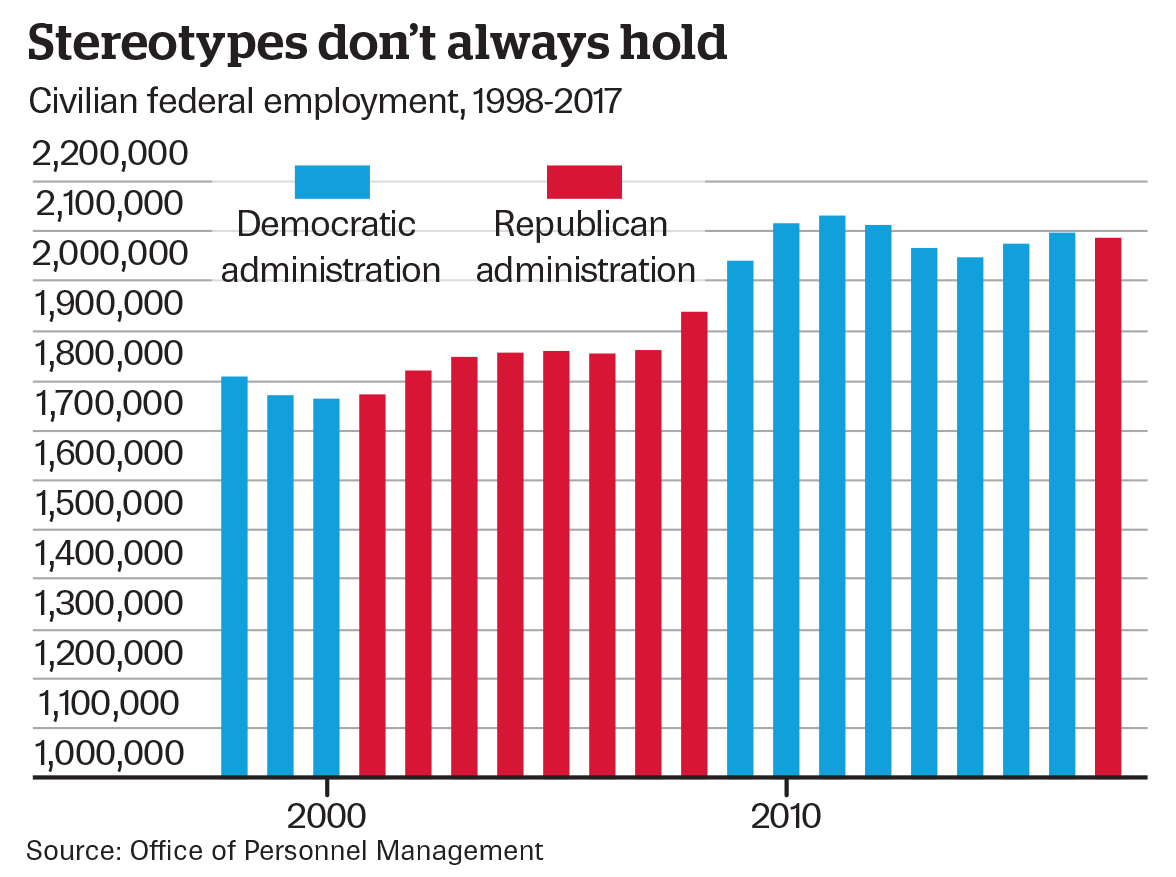 Separating out the military, the three presidents who preceded Trump — Bill Clinton, George W. Bush, and Barack Obama — saw changes in federal employment that did not necessarily track with the stereotypes of Democrats as profligate and Republicans as flinty toward the federal workforce.

The steepest decline in civilian employment occurred under Clinton, a Democrat, due in part to the initiative headed by his vice president, Al Gore, known as Reinventing Government.

While the program was intended to make government operate more effectively, its impact on the size of the workforce was significant. These included "some consequences that the government hasn’t recovered from," Bulman said.

Then federal employment rose again under Bush, a Republican, mostly due to the aftermath of the Sept. 11 terrorist attacks. The American response prompted increases for various agencies involved with the war on terrorism, including the departments of Homeland Security, Defense, and Veterans Affairs.

Under Obama, the workforce initially grew because of the stimulus bill intended to ease the Great Recession. Civilian federal employment peaked in 2011, then fell for three years, due to the unwinding of the stimulus and the Iraq war, as well as the imposition of budgetary restrictions imposed after a bipartisan failure to agree to a spending plan.

In 2017, Trump took a significant step toward fulfilling his campaign promise to impose a targeted hiring freeze: He imposed a freeze shortly after taking office. But the administration said in April it would be replacing that initial freeze "with a smarter plan, a more strategic plan, a more surgical plan."

As of yet, we have not seen a plan. There is no indication that a broad-based hiring freeze is imminent, the White House told PolitiFact, though some agencies may be continuing to operate under an informal hiring freeze.

Data from the federal Office of Personnel Management shows that under Trump, some agencies have increased their numbers while others have cut back. 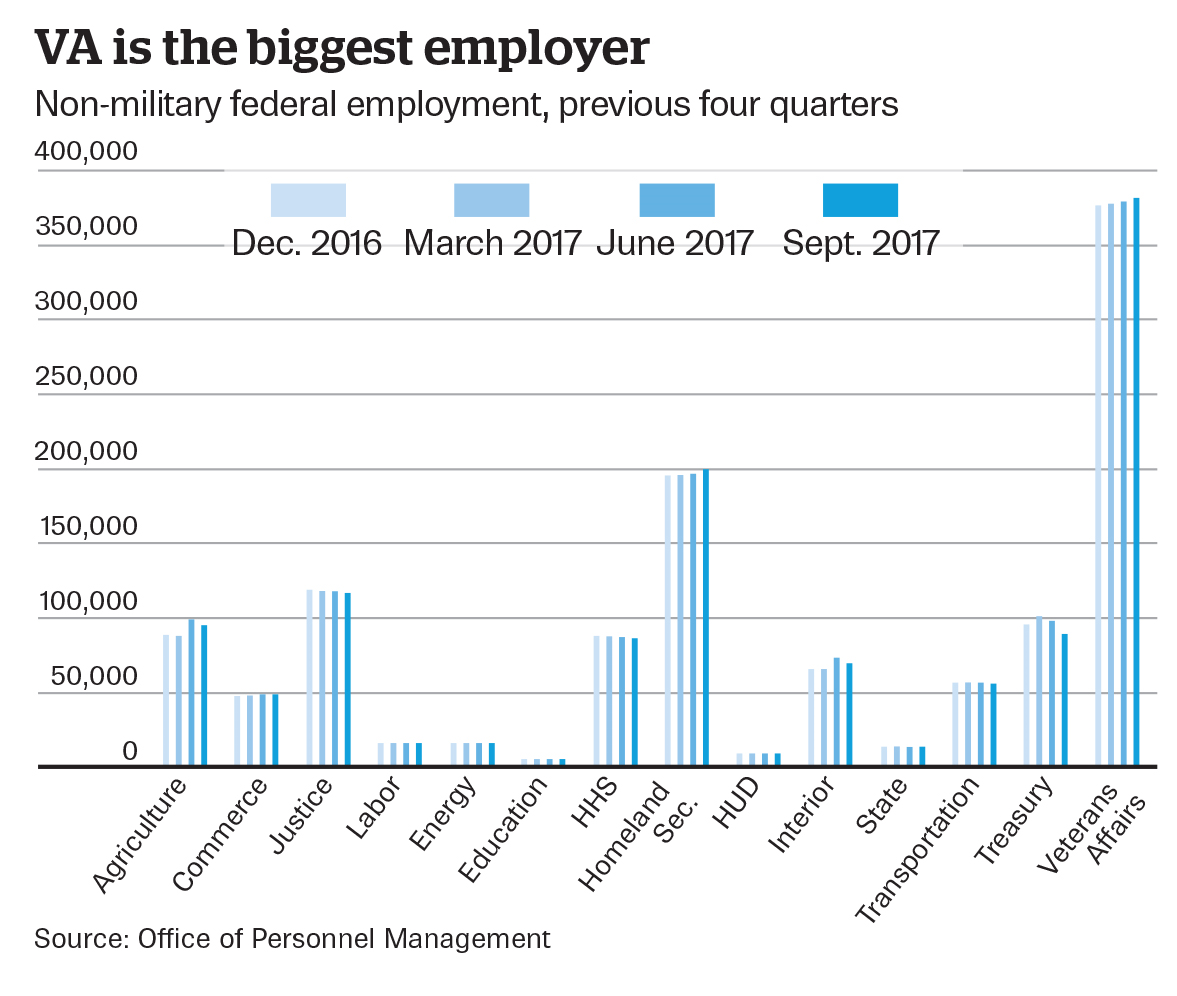 Specifically, the departments of Justice, Labor, Energy, Education, Housing and Urban Development, State, Transportation and Treasury have seen declines in employment over the past four quarters, though the decreases have generally been modest.

Overall, the federal workforce hasn’t grown or shrunk much at all since Trump has been in office, according to Office of Personnel Management figures: 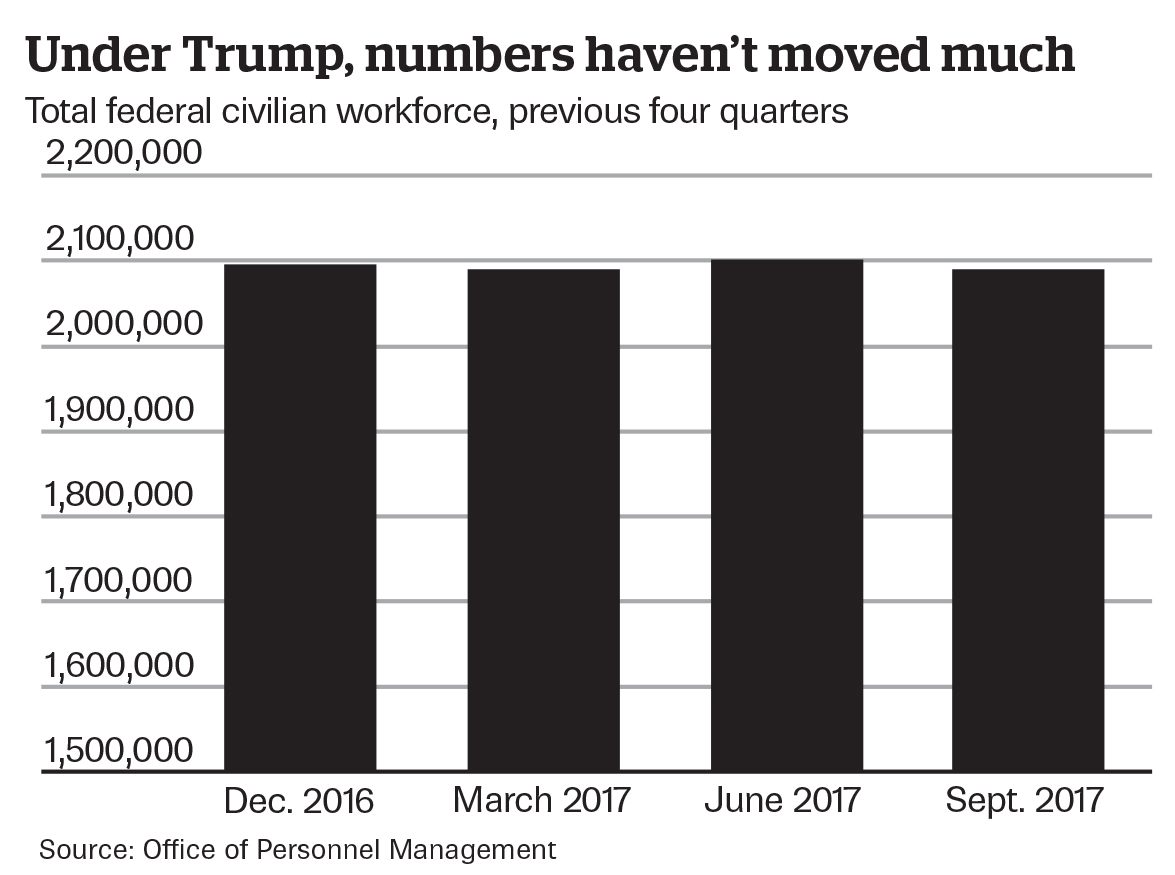 Experts on government management aren’t too enamored of Trump’s approach to shrinking the government through attrition -- that is, declining to fill positions when they come open due to retirement or resignation. This method of cutting personnel is less disruptive for employees, but it can have a downside for the federal mission.

"When you shrink through attrition, there’s no strategy to it — you’re not losing people where want to be," Bulman said. "You’re also depriving the agency of a future leadership pipeline. And if you don’t have a sense of an agency’s key goals, it’s hard to know what is the right number of people."

Another reality, experts say, is that attrition in the federal government can lead to increased outsourcing.

Outsourcing is already a significant factor in federal employment. The official counts include only official federal employees. But the Volcker Alliance, a group founded by former Federal Reserve Board chairman Paul Volcker that is charged with rebuilding public trust in government, has compiled data on the role of contract- and grant-based workers. 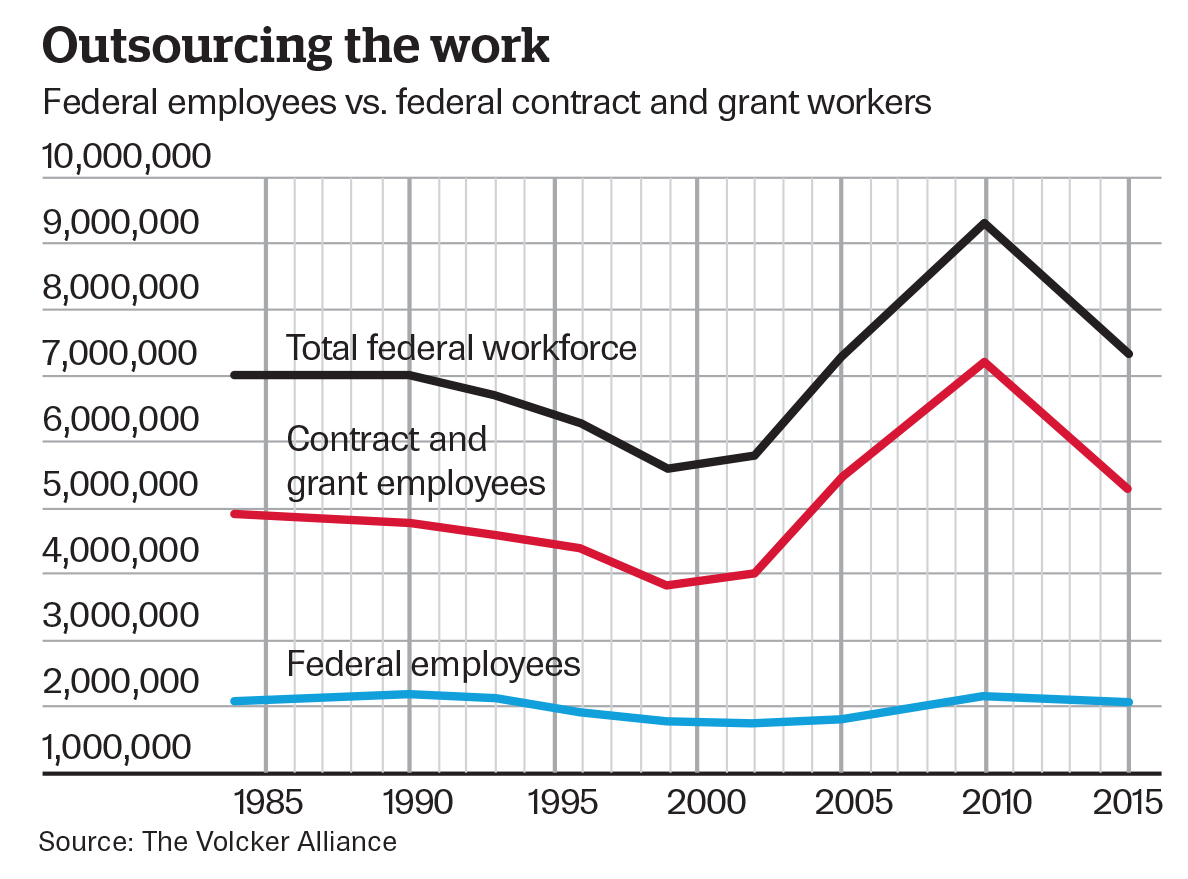 The number of contract and grant workers actually exceeds the number of official federal employees by a significant amount.

"Unless you change what the federal government is asked to do, the work gets outsourced, and that can be expensive," Bulman said.

Another problem facing the federal workforce, experts say, is demographic — the inexorable aging of the Baby Boom. Almost one-third of federal workers are in their 50s, and an additional 13 percent are 60 or over. 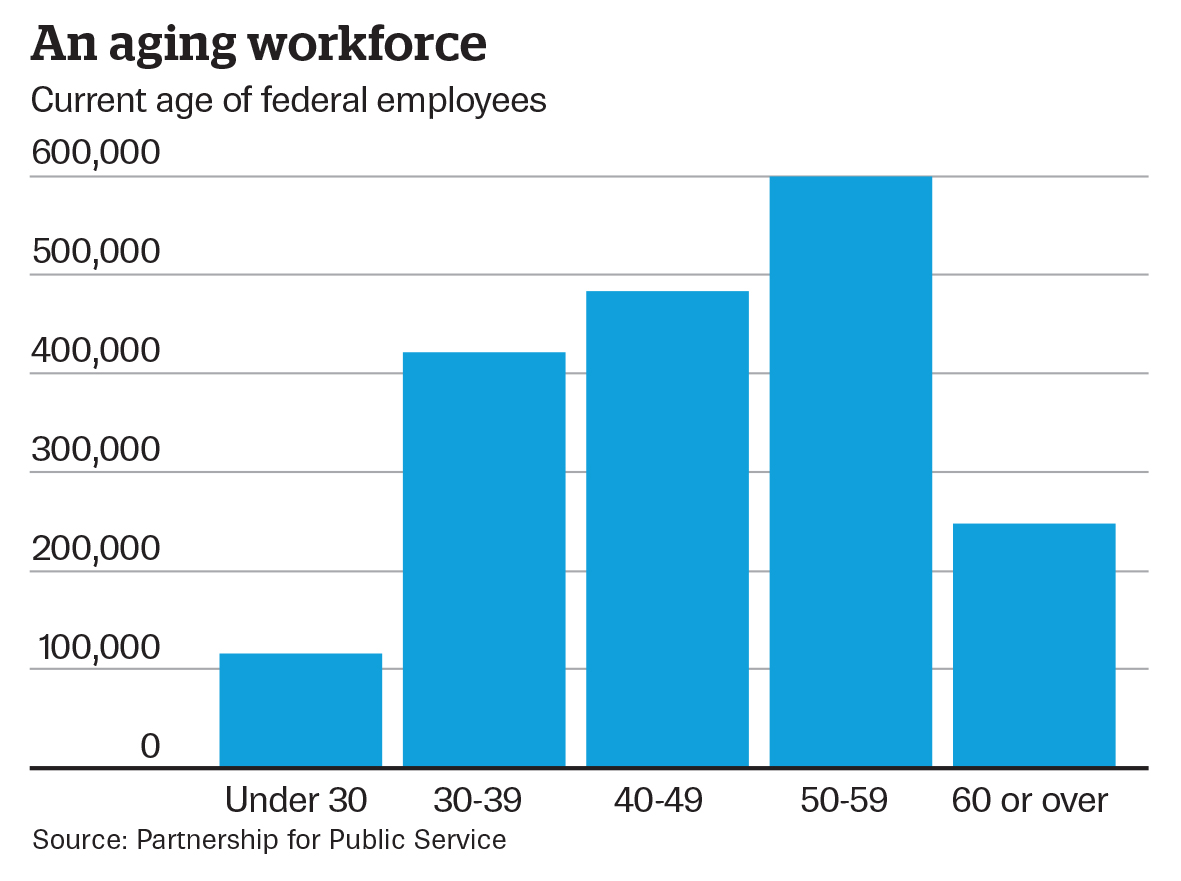 "It's a quiet crisis that is about to become deafening," Light said. "We knew about it in the 1980s, but haven't done much about it."

Just 6 percent of the federal workforce is under 30, a sign that working for Uncle Sam is not attractive to millennials.

This reality is "alarming when thinking about some of the skill sets, and the excitement, that comes with younger workers," Bulman said. Another problem, she said: Not being able to communicate effectively with younger Americans.

Another reality about government worth noting: The federal workforce is actually quite a bit smaller than the workforces in state and local government. 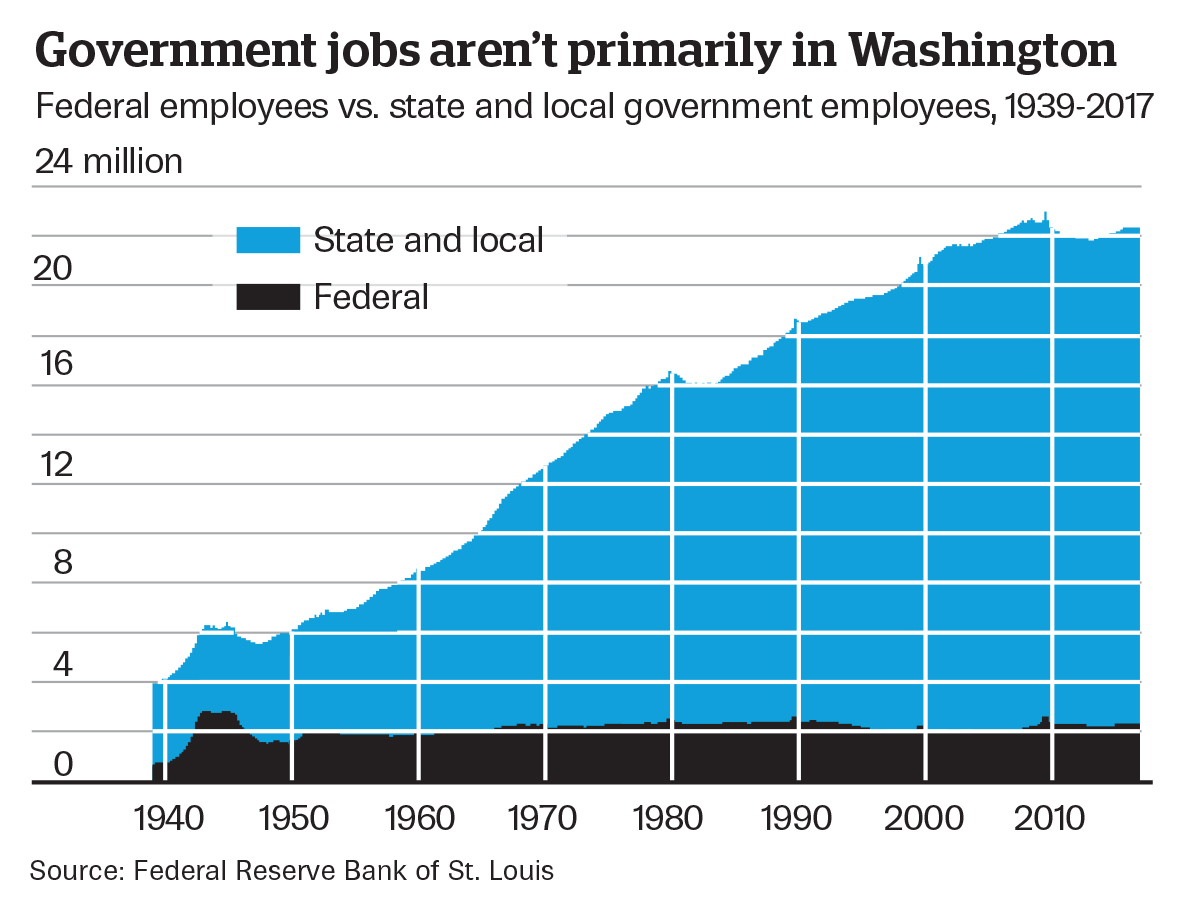 The size of the federal workforce (excluding contract- and grant workers) has remained fairly steady since the end of World War II. However, the state and local government has grown dramatically.

The reason is that much of the nitty gritty of government — including schools — is handled by local governments, either cities or counties. So as the population has grown (and, to a certain extent, as the number of jurisdictions has grown) the number of local workers has climbed.

This trend is evident in individual states, as well. Consider Florida: 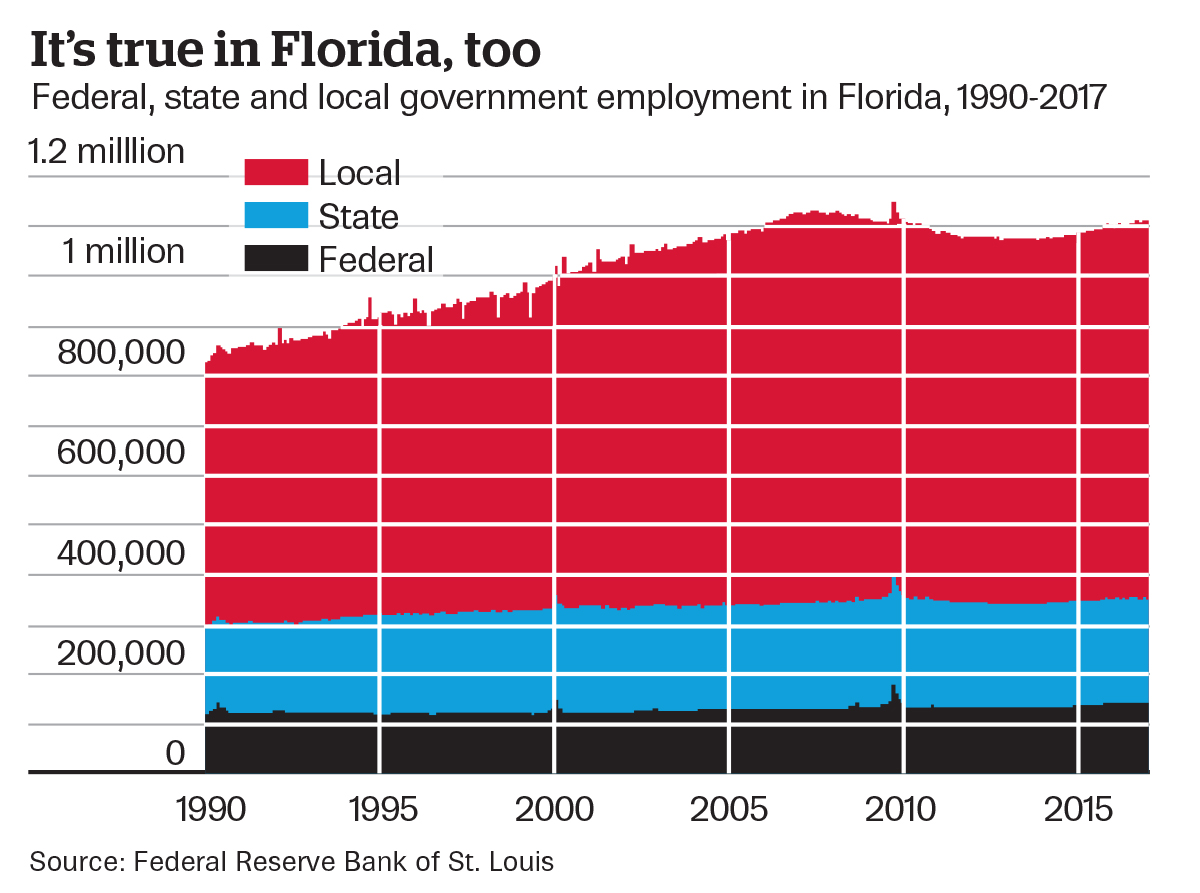 On both the national level and the state level, the only notable interruption in the increase in state and local workers came with the Great Recession, when budget pressures forced many states and local jurisdictions to cut their staffs. But after a dip, rising tax revenues during the recovery have prompted hiring again. Today, the number of state and local employees is once again approaching its pre-recession level.

Interview with Mallory Barg Bulman, vice president for research and evaluation at the Partnership for Public Service, Jan. 11, 2018