Laurel or Yanny? A fact-checker’s guide
By Allison Graves May 16, 2018

Once again, America is a nation fiercely divided. This time, it’s not about politics.

The debate started three days ago when a Reddit user shared a four-second audio clip with a simple question: "What do you guys hear?" The choices: Yanny or Laurel. After being posted on Reddit, the clip blew up on other social media platforms.

What do you hear?! Yanny or Laurel pic.twitter.com/jvHhCbMc8I

Reminiscent of "the dress" phenomenon of 2015, different people heard different names — and insisted it was their sense that was right.

How does this work?

Here’s PolitiFact’s take on the facts you need to know behind the latest internet meme.

Why is this happening?

Multiple factors explain why some people hear Yanny and other people hear Laurel — most of which can be explained with a little science and physics.

The first thing to understand is that the Reddit audio was low-quality. Experts said that can lead to some ambiguity about what people actually hear.

"I would guess that because of the poor recording quality, the sound ended up being on a perceptual border," said Todd Ricketts, vice chair of graduate studies with the department of hearing and speech sciences at Vanderbilt University Medical Center.

In other words, the audio is so crummy that it straddles the line between one sound and another.

But the main explanation comes down to frequency and the device you are using to play the audio.

Different playback systems can change the frequency of the audio being played. For example, phones, computers and headphones often filter out low frequencies, while larger speakers like subwoofers can handle them better.

This is important, because the acoustics for "Yanny" is heard at a higher frequency than the acoustic information that makes someone hear "Laurel."

In other words, you are more likely to hear "Laurel" on higher quality devices because it is better at handling the low frequency.

What does hearing either word say about my hearing?

Because this phenomenon has a lot to do with frequency, experts said the age of the listener can affect what a person hears, too.

Around the age of 50, a lot of people have begin losing their high-frequency hearing, which is why experts believe older people would be more likely to hear "Laurel," and vice versa.

"If you were to compare a group of young people to a group of old people listening to this clip on the same device, it’s more likely that the older people will hear ‘Laurel,’ " said Barbara Shinn-Cunningham, a professor, and expert on the neuroscience of hearing.

Is there a right or wrong answer?

Brad Story, a professor of speech, language and hearing sciences at the University of Arizona, sent PolitiFact a file with visualizations that explain why he believes the original recording was likely saying "Laurel."

According to Story, the original recording included "primary acoustic features" for the letters "l" and "r." He sent us this slide: 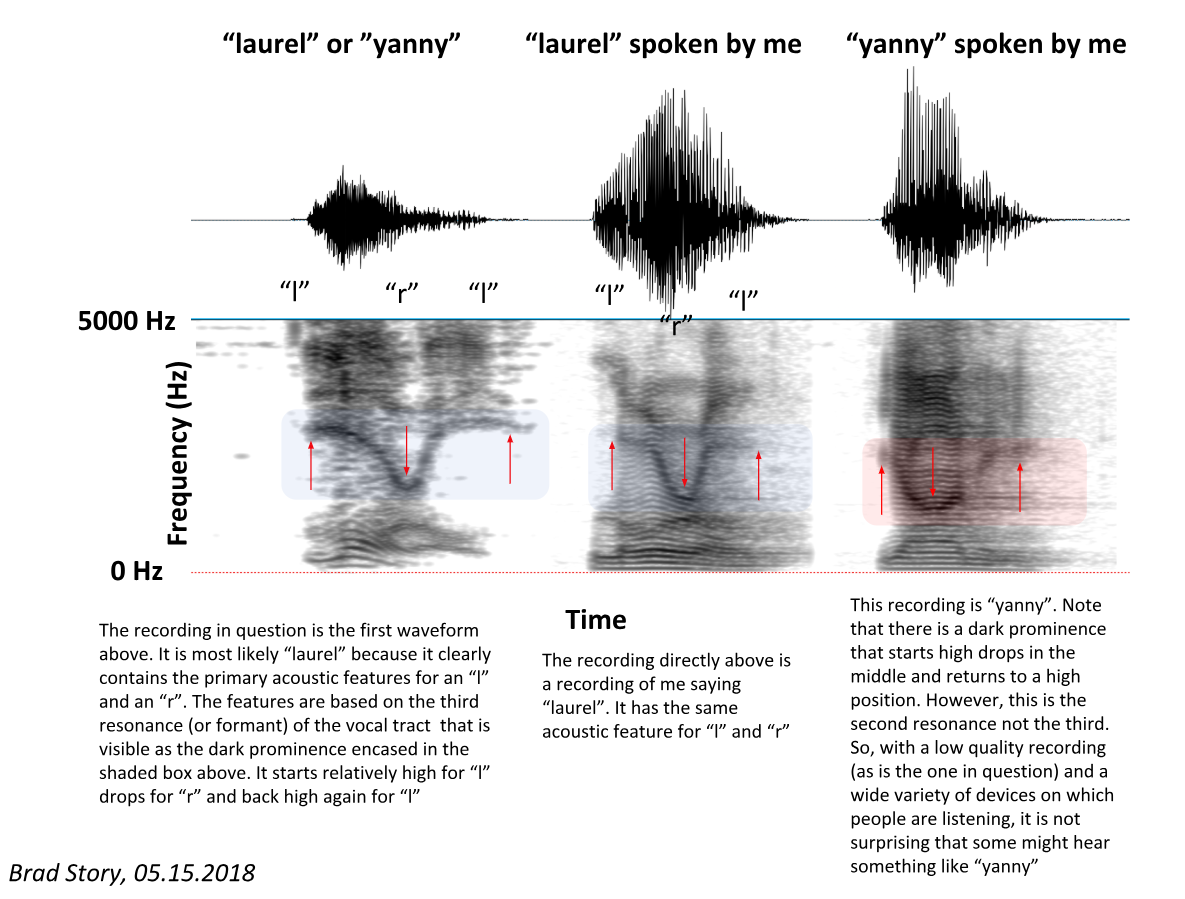 Ricketts agreed the recording was likely "Laurel." But he could not say for sure.

Interview, Barbara Shinn-Cunningham, a professor of biomedical engineering, May 16

Email exchange, Todd Ricketts, vice chair of graduate studies with the department of hearing and speech sciences at Vanderbilt University Medical Center, May 16

Email exchange, Brad Story, a professor of speech, language and hearing sciences at the University of Arizona, May 16, 2018