New Republican PAC
stated on June 11, 2018 in a political ad:
Says Bill Nelson voted for "cuts to Medicare providers" and voted to weaken "Social Security protections" as a U.S. senator.

A new ad portrays Democratic Sen. Bill Nelson as a career politician who doesn’t have the backs of senior citizens.

The ad juxtaposes Nelson’s mugshots from the 1970s to the 2000s with claims about his votes on Medicare and Social Security, two federal programs that largely benefit seniors, at the time. 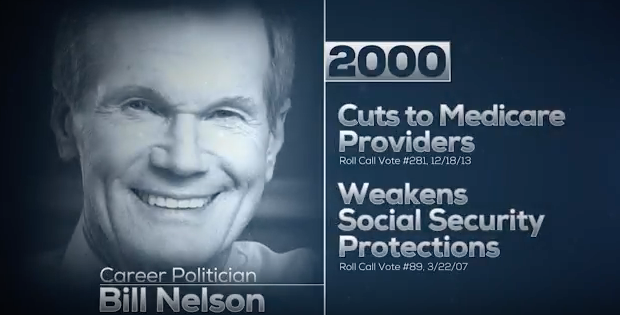 "Here's the truth: No one is more committed to protecting Medicare and Social Security than Bill Nelson," said campaign spokeswoman Carlie Waibel.

We wanted to get to the bottom of the ad’s claim: Did Nelson vote to cut Medicare providers and weaken Social Security protections?

The New Republican PAC cited a few votes Nelson took while in the U.S. Senate, but experts questioned whether the measures really lived up to the consequences the ad described. All in all, these were not votes geared toward making substantive, structural changes to the Social Security and Medicare programs.

Crash course on a spending showdown

The PAC cited two measures that Nelson supported in 2011 and 2013 affecting Medicare.

Understanding how those votes can be characterized as "cuts to Medicare providers" requires a lot of context and a little history lesson on the 2011 sequester.

Let’s start with Nelson’s vote on the Bipartisan Budget Act of 2013, spearheaded by Rep. Paul Ryan, R-Wis., and Sen. Patty Murray, D-Wash. The budget passed the Senate 64-36, and every Democrat, including Nelson, voted in favor.

The legislation averted a government shutdown in January 2014 by funding federal agencies and providing some relief from the across-the-board cuts known as sequestration in 2011.

Here’s the relevant background: In the summer of 2011, President Barack Obama and Congress were engaged in a high-stakes standoff over the debt limit. House Republicans insisted on spending cuts before increasing the debt limit.

Obama and House Speaker John Boehner tried unsuccessfully to reach a "grand bargain" to put the federal budget on more stable footing. When that failed, they arrived at the much less ambitious Budget Control Act of 2011.

That law included about $1.2 trillion in future budget cuts, but it also directed Congress to find another $1.2 trillion via a bipartisan "supercommittee." As further incentive, the law had a threat: If a supercommittee couldn’t agree on a package, or if Congress voted down the supercommittee proposal, a "sequester" — or across-the-board cut — would automatically go into effect, with half coming from defense.

Sequestration was enacted when Congress passed the Budget Control Act in August 2011.

The 2013 budget extended a 2 percent spending cut to Medicare provider and plan payments.

The liberal Center on Budget and Policy Priorities estimated that the 2 percent cut translated to a reduction of $11.1 billion for Medicare providers in fiscal year 2013.

"That means that doctors, hospitals, and providers will continue to bill Medicare in the normal way but will be reimbursed at 98 cents on the dollar, as will per-capita premium payments made to health insurance plans on behalf of Medicare participants," the center wrote in its analysis.

Medicare cut? Not that simple

So that’s a cut, but experts suggested the ad is overplaying it.

First, the cut was intended as a short-term bridge to a more permanent solution to spiraling Medicare provider costs.

Second, the provision was a stopgap alternative to a much larger cut that would have gone into effect if nothing else was passed, said Stuart Guterman, a senior health care scholar at the Commonwealth Fund, which supports expanding health care access for the poor.

The final Medicare physician fee schedule rule called for a 20.1 percent reduction in the fee schedule update for 2014. By passing the legislation cited in the ad, Congress was also able to block the 20.1 percent cut and replace it with a small increase for services provided through March 31, 2014.

All in all,  Joe Antos, a health policy specialist at the conservative American Enterprise Institute, said "Two percent is clearly a minor reduction."

The last point we’ll make about both bills is that they were bipartisan and passed by significant margins. And 28 Republicans including Mitch McConnell, who leads the Senate GOP majority that Scott hopes to join, supported the 2011 measure.

To push back on this claim, Nelson’s camp said that he opposed cuts to Medicare in 2017 when the November GOP tax plan threatened to make cuts to Social Security (At the time, the CBO predicted the plan could cut $25 billion from Medicare.) They also pointed to legislation he sponsored such as measure to end a Medicare policy that causes seniors to be charged unknowingly with high costs after receiving medical care.

The ad hammers Nelson for harming Social Security in the 1980s and again in the 2000s, first with a "cut" and then by weakening its protections. We’re focused on his Senate actions for this fact-check, but we’ll explain his 1983 vote below.

To support its claim, the pro-Scott group cited two votes Nelson took in 2006 and 2007.

It’s misleading to characterize those as votes in favor of "weakening Social Security protections."

The votes involved essentially the same measure and were introduced by the same lawmaker, then-Sen. Jim DeMint, R-S.C. DeMint’s amendments aimed to create a reserve fund for Social Security.

So, the vote wasn’t explicitly looking to weaken Social Security protections. By voting against it, Nelson opposed adding something to the existing program.

The amendment failed both times, with Nelson and every other Democrat voting against the measures. According to the Democrats who voted against it, the amendment was a step toward Social Security privatization, which critics argued would worsen solvency, not strengthen it.

Supporters of the amendment, including DeMint, argued that setting up a reserve fund would stop Congress from borrowing money from the Social Security Trust Fund.

"The DeMint proposal was a stalking horse for personal accounts, in the sense of setting aside money that DeMint and others would have wished to be invested in personal accounts," Biggs said. "It’s not unreasonable that someone who opposed Social Security personal accounts, as Sen. Nelson did, wouldn’t favor (those) amendments."

So Nelson could counter-argue that his vote instead served to keep privatization at bay.

He also was endorsed by the National Committee to Preserve Social Security and Medicare in April.

"Sen. Nelson has been a staunch advocate of Social Security, Medicare and Medicaid since taking office in 2001," they wrote. "His voting record on these issues has consistently earned him a 100 percent rating from the National Committee.

The pro-Scott PAC reaches into the early years of Nelson’s time in Washington as further evidence that he made "cuts" to Social Security.

In 1983, Nelson voted for the Social Security amendments, which were passed by bipartisan majorities and signed into law by Republican Ronald Reagan. Before the amendments passed, actuaries warned that Social Security payments would be unable to continue paying benefits in July 1983 unless Congress acted.

The New Republican PAC ad said that Nelson voted for "cuts to Medicare providers" and voted to "weaken Social Security protections" as a senator in the 2000s.

In addition, the ad ignores other actions Nelson has taken to protect Medicare and Social Security.