People gather in Juarez, Mexico, Saturday, Aug. 3, 2019, in a vigil for the three Mexican nationals who were killed in an El Paso shopping-complex shooting. (AP Photo/Andres Leighton)

One question hangs over every mass shooting: How could a person plot and execute such horrific violence? In the search for answers, psychiatric drugs have emerged as a culprit.

One viral list that gets to the heart of this belief catalogues several dozen assailants and the psychiatric medicine they were said to be on.

For example, the list includes the case of Eric Harris, one of the Columbine High School shooters, who the Washington Post confirmed had been prescribed the antidepressant Luvox. Likewise, the New York Times confirmed that Jeff Weise, a Minnesota teen who in 2005 killed nine before killing himself, and whose name also appeared on the list, had been prescribed Prozac.

Many readers pointed to this list and another story to push back against our fact-checking of misinformation after the attacks in El Paso, Texas, and Dayton, Ohio. But experts say we shouldn’t presume a causal link based on such a relatively small number of cases. More broadly, they told us there is no convincing research that prescription medication fuels violence.

Some 42 million Americans have taken antidepressants, a class of psychiatric drug that is often alleged to have a link to violence. That’s around 13% of the U.S. population, with higher rates for women (16.5%) and people over the age of 60 (19%), according to 2017 data from the National Center for Health Statistics.

But mass shooting incidents, while tragic, happen less frequently than would be expected if psychiatric drugs were the cause, experts say. The number of mass shootings in the United States depends on how you count. A Washington Post database, which defines mass shootings as four or more people killed, counts 165 such incidents since the tally began in 1966, an average of about three per year.

"If there was a connection or link, one would expect it to be pronounced, or at least much greater than we are seeing," said Dr. James Knoll, director of forensic psychiatry at SUNY Upstate Medical University. "Why do we not see increased violence in women? People over 60?"

At many readers’ urging, we took a closer look at the roots of this recurring claim.

A Church of Scientology-affiliated theory

Readers pointed us to a 2018 report from the Citizens Commission on Human Rights International. The commission bills itself as a watchdog of the mental health industry, and its report creates the impression that a cause-and-effect relationship exists between prescription drugs and violence.

To its credit, the commission has performed some successful oversight of the mental health field. For instance, in the 1970s it helped to shine a spotlight on a dangerous treatment known as "deep sleep therapy" that was being administered at an Australian hospital and killed 25 patients. But as a Daily Beast investigation shows, the commission has also endorsed fringe theories, like the notion that psychiatry was responsible for the Sept. 11, 2001, terror attacks and the Holocaust.

A number of readers sent us a link to the commission’s 2018 report as proof that psychiatric drugs cause mass shootings. The report’s title, "Psychiatric Drugs: Create Violence & Suicide," makes it easy for readers to draw this conclusion — and the impression is reinforced by section headings like "Violence: Psychotropic Drugs’ Best Kept Secret," "Psychiatric Drugs Create Hostility, Aggression & Suicide" and "School Shootings: The Missing Link."

But the thrust of the report doesn’t support a cause-and-effect relationship.

The authors allow that "there can be numerous reasons for mass murder, violent crime and suicide." On page 23 of the document they characterize the relationship between psychiatric treatment and violence not as one of cause and effect, but correlation.

It describes psychiatric drugs as a "common denominator" in many recent mass shootings. As support, it cites dozens of cases where people who were said to have been on psychiatric drugs when they committed acts of violence against others and/or themselves.

Based on feedback from our readers, it’s clear that many interpret the report as proof that psychiatric drugs are responsible for mass violence.

But six experts we spoke to — a mix of psychiatrists and specialists on crime and violence — said a causal link has not been scientifically established.

Such psychological studies tend to show the shooters were motivated by deep resentment, self-centeredness and ideologically driven hate, plus a desire to "leave a mark on history, even if an obscene one," he said.

"They do not complain of medication side effects — many are not even on them — or of medications ‘inserting’ murderous compulsions into their heads," Knoll added. 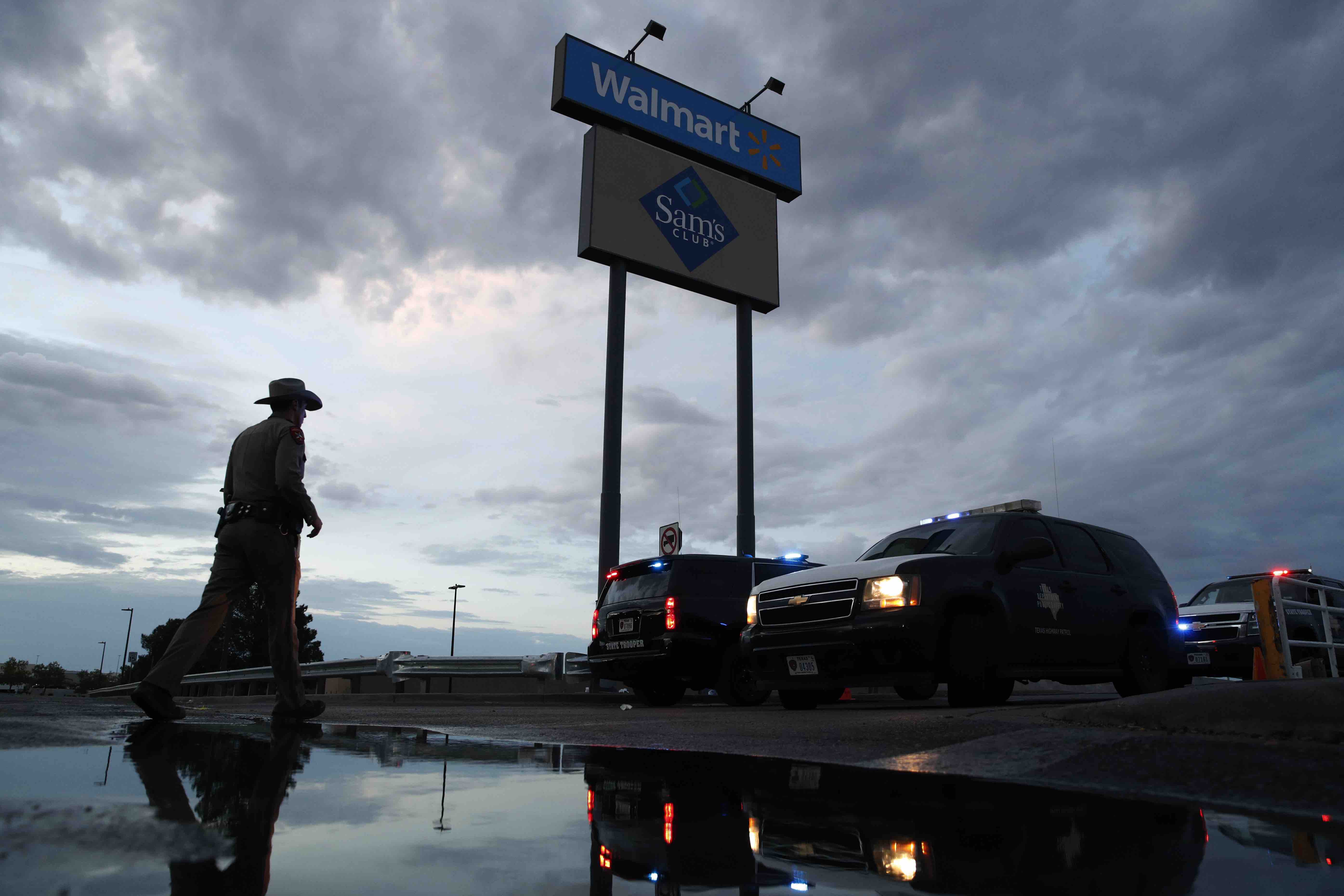 Law enforcement officials block a road at the scene of a mass shooting at a shopping complex Sunday, Aug. 4, 2019, in El Paso, Texas. (AP)​

Dr. Gwen Adshead, a forensic psychotherapist in England and an expert on the psychology of violent behavior, said that in her view there is no evidence that psychiatric medicine is linked to mass shootings. In fact, she said, in many cases the argument gets the causal relationship backwards.

"Most people who commit these kinds of acts of severe violence are only prescribed medication because of their horrible thoughts, moods, and ideas," she said. "Further, the majority of people who carry out these acts are not known to any mental health service."

One study included in the commission’s report is based on an analysis of adverse reactions to prescription drugs that doctors or patients have reported to the Food and Drug Administration. Based on these self-reports, researchers found that 25 psychiatric drugs — 11 antidepressants, six sedative/hypnotics and three attention deficit hyperactivity disorder drugs — were disproportionately associated with violence.

But Knoll cautioned against ascribing too much weight to self-reported cases of adverse reactions.

If an association between medication and violence were established either through research or overwhelming anecdotal reports, the FDA would remove a product from the market. But this has never happened for antidepressants, he said. And as we’ve previously reported, there’s no scientifically meaningful link between the ADHD treatment Ritalin and school shootings.

"Most people likely do not understand that just because something is reported to the FDA," Knoll said, "it does not mean that this was a scientific finding."

The second source many readers cited comes from the website AmmoLand.

The April 2013 post, which carries the headline, "Every Mass Shooting Shares One Thing In Common & It’s NOT Weapons," lists names of shooters and psychiatric drugs they are said to have been prescribed. Prescription drugs are the "single largest common factor," it argues.

The post was written by Dan Roberts, whose bio describes him as a grassroots gun rights supporter. Roberts did not respond when prompted for a comment.

The AmmoLand article claims that gun manufacturer John Noveske posted the list to Facebook days before he died under suspicious circumstances. The author strongly insinuates that Noveske, 36, was killed for exposing the link between prescription drugs and mass-casualty shootings.

Another variation holds that then-President Barack Obama ordered Noveske’s killing to send a message to gun rights activists, according to a Mother Jones report that investigated the claim.

But an Oregon State Police report of Noveske’s Jan. 4, 2013, fatal automobile accident makes no mention of suspected foul play. The police report said Noveske lost control of his car while traveling on an Oregon highway before striking two large boulders. The vehicle rolled and ejected Noveske, who according to police, was not wearing a seatbelt.

While a desire to blame psychiatric medication for gruesome acts of violence is understandable, it doesn’t reflect what is known about the true motivation behind mass shootings, Knoll said.

"It is much more satisfying to point at a pill and say, ‘There! That’s what caused it!’ " he said. "It is less satisfying to think about how severe selfishness, resentment and desire for infamy are simply a part of the broad range of human nature."

PLoS One, "Prescription Drugs Associated with Reports of Violence Towards Others," Dec. 15, 2010

PolitiFact, "No links between Ritalin and school shootings, as NRA's Oliver North claimed," May 22, 2018

AmmoLand, "Every Mass Shooting Shares One Thing In Common & It’s NOT Weapons," April 1, 2013

Email interview with Grant Duwe, research director for the Minnesota Department of Corrections and author of "Mass Murder in the United States: A History," Aug. 5, 2019