How big is America’s household debt burden today? Overall, not so bad

A foreclosed home in Egg Harbor Township, N.J., in 2008. The U.S. household debt burden is much more manageable today than it was back then, on the cusp of the Great Recession. (AP)

It may come as a surprise to Americans laboring under mountains of student debt, but the overall household debt burden in America is actually more modest today than it’s been in many years.

In fact, experts say, household debt loads seem to be at historic lows — far more so than on the eve of the Great Recession. That makes the economy more sustainable today, said Steve Fazzari, an economist at Washington University in St. Louis.

"Unlike 2006 to 2009, I doubt household debt will be the trigger of the next economic downturn," he said.

Here’s what we know about the state of personal debt today.

There are a number of indicators that personal debt is at historic lows. One way gauges how much of a squeeze interest payments are putting on Americans’ cashflow.

Various types of household debt — mortgages, home-equity loans, auto loans, credit card debt, and student loans — collectively rose from the early 1990s through the onset of the Great Recession, then fell precipitously. Today, the percentage is lower than at any time in the past four decades.

Historically low interest rates have made household debt "more sustainable now than in the past," Fazzari said.

A different statistic for household debt as a percentage of the nation’s gross domestic product fits the same general pattern. The household debt burden peaked right around the onset of the Great Recession and and then fell consistently for the next decade.

It’s worth noting that the absolute amount of household debt continues to rise. However, household debt has risen more slowly than disposable income and gross domestic product, making such levels of debt more manageable.

Meanwhile, the types of household debt being held have changed over time.

For instance, the dollar value of credit card balances, shown in pink in the chart, has remained steady since 2003, while the value of auto loans has increased somewhat. The biggest increase during that period, however, has come from student loans.

"Student loan debt growth has outpaced other consumer loan types and is now second only to mortgage debt in terms of magnitude of total debt," said Cliff Robb, a professor at the University of Wisconsin who specializes in personal finance.

This development affects younger Americans disproportionately, and may overwhelm any optimism about overall household debt loads.

RELATED STORY: Is college worth the cost?

One of the most notable consequences of the Great Recession has been the shrinking of the subprime mortgage market — loans made to borrowers with weaker credit scores. Subprime loans boomed in the early 2000s but helped bring on the market crisis that tanked the economy in 2008.

Put simply, lenders have become more cautious in recent years about who they loan money to. Loans to borrowers with credit scores below 659 have all but disappeared, and those made to borrowers with scores between 660 and 759 have seen their share shrink considerably.

In addition, the overall volume of new mortgage originations has shrunk considerably in the wake of the Great Recession.

However, auto loans have not followed the same path. After the nadir of the Great Recession, auto loan originations have risen consistently, including for Americans with relatively low credit scores.

This growth has led some observers to worry that auto loans could be the next problem area for household debt loads, especially in the still-extant subprime market.

However, the total of all auto loan balances remains far smaller than the value of all mortgages, leading some experts to say the risk is not dire.

"There is substantial growth here, but it seems mostly to be a recovery from depressed levels following the Great Recession crisis and its immediate aftermath," Fazzari said. "Growth in auto borrowing seems fairly flat for the past two to three years. I do not see the seeds of a major collapse here."

Meanwhile, on the question of credit card debt, the picture has clearly brightened since the Great Recession. The percentage of households who were late on credit card payments peaked at north of 20%, but it had fallen to about 13.5% by 2016, the most recent year for which data is available. The percentage who were late by more than 60 days has also fallen during that period. 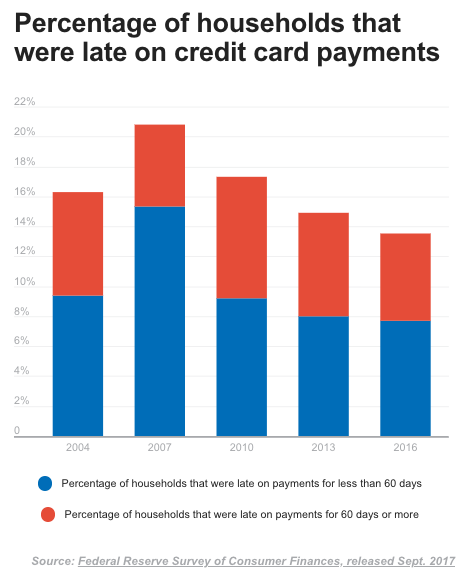 Sources for charts linked in charts

Email interview with Deborah Thorne, sociologist at the University of Idaho, Dec. 12, 2019

Email interview with Cliff Robb, professor at the University of Wisconsin who specializes in personal finance, Dec. 13, 2019