Let’s take a closer look at what she said, and what it could mean.

What did she suggest in her interview?

Here is what Ocasio-Cortez told 60 Minutes:

"You look at our tax rates back in the '60s and when you have a progressive tax rate system, your tax rate, let's say from zero to $75,000, may be 10 percent or 15 percent, etc. But once you get to the tippy-tops —  on your 10 millionth dollar — sometimes you see tax rates as high as 60 or 70 percent. That doesn't mean all $10 million are taxed at an extremely high rate, but it means that as you climb up this ladder, you should be contributing more."

Does this constitute a formal proposal?

When we asked her office, they said it’s more of a discussion starter.

"It’s a back-and-forth," said spokesman Corbin Trent. "She doesn’t have a white paper on tax policy. Her point was that we need to look at tax policy in a broader way. The fact is, we had a much higher top tax rate when we went to the Moon and built the middle-class."

That said, Trent said he had no objection to us analyzing the specific parameters Ocasio-Cortez mentioned on 60 Minutes. So we’ll do that here.

Would taxpayers earning $10 million pay a 70 percent rate on all of their income? And how much higher is that than current tax rates?

No, and this is an important qualifier (and one that some Republican lawmakers seemed fuzzy on). Under Ocasio-Cortez’s idea, the 70 percent rate would affect only the dollars received above $10 million. Economists call this a 70 percent "marginal tax rate."

Currently, the top marginal tax rate is 37 percent, which kicks in for income above $510,300 for individuals and $612,350 for married couples. Here’s the full list of tax brackets and income cutoffs for 2019, according to the Tax Foundation. 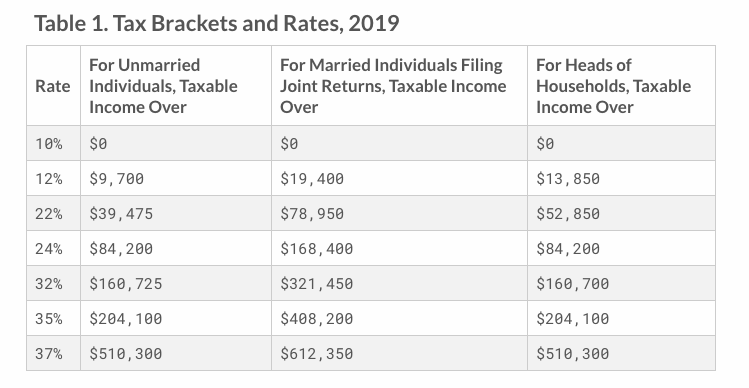 So 70 percent would be nearly double the highest rate today.

How many people make enough to be hit by a higher tax rate on $10 million in income?

Very few. Citing federal data, Mark Mazur, director of the Urban Institute-Brookings Institution Tax Policy Center, said it would amount to 16,000 Americans. That’s a tiny share of the 127 million households in the United States. That 16,000 would include a lot of superstar athletes, entertainers and hedge-fund financiers.

Is there precedent for marginal rates that high?

Yes. From roughly the World War II period to the Ronald Reagan administration, top rates were much higher.

We turned to the Tax Foundation’s federal income tax rate history, which documents figures going all the way back to 1913, when the income tax began with the ratification of the 16th Amendment. Here’s the full chart:

But that wasn’t the only period of high top marginal rates. Between 1932 and 1981, the top tax rate never dropped below 63 percent. And during the eight years of the Eisenhower presidency, from 1953 to 1961, the top marginal rate was 91 percent. (It was 92 percent the year he came into office.)

Are there differences between the high tax rates of the past and what Ocasio-Cortez is talking about?

Yes. For starters, the high rates of the past hit people earning much lower incomes than in Ocasio-Cortez’s example.

In the meantime, many high-income taxpayers in the past were able to use tax shelters to pay much lower effective tax rates. Parking money in tax-free bonds or structuring their holdings in other ways could produce lower tax rates.

Could income be hidden from taxes under higher marginal tax rates?

Sure. While many tax shelters were eliminated in the 1986 tax reform law, creative taxpayers and their accountants would likely find a way to shield large blocks of income. Already, offshore tax havens exist, and some wealthy taxpayers could opt to receive more of their income through corporations, which are currently taxed at a lower rate.

Using the $10-million income as a cut-off, Mazur said that taxing the $244 billion in income above the threshold at her 70 percent rate would bring in an added $72 billion a year, or $720 billion over 10 years.

Of course, the actual amount would likely be lower, depending on how successfully that excess income is shielded from taxation, Mazur said. Setting the 70 percent tax bracket lower than $10 million would change the calculations.

What are some of the risks of higher tax rates on the very wealthy?

Though the idea prompted warm words on the left side of the ideological spectrum, anti-tax advocates, not surprisingly, slammed Ocasio-Cortez’s idea.

"New taxes are often imposed on ‘the rich’ or ‘them,’ then over time, they trickle down to hit all of us," wrote Grover Norquist, president of the group Americans for Tax Reform. "That is what happened with the personal income tax. Once targeted to the top one percent but now hitting half of Americans."

But tax experts warned that higher tax rates would likely go hand-in-hand with other tax changes. Little if anything is known about what would happen to other taxes, such as capital gains, dividends, and business taxes. So making calculations at this point is somewhat speculative.

"It’s not possible to evaluate this in isolation," Mazur said. "You want to see how this proposal fits in with everything else."

But even if the idea is at an early age, "she’s certainly got us talking," Mazur said.

Vox.com, "Alexandria Ocasio-Cortez is floating a 70 percent top tax rate — here’s the research that backs her up," Jan. 7, 2019