Is WikiLeaks Russia’s ‘useful idiot,’ its ‘agent of influence,’ or something else?

WikiLeaks founder Julian Assange addresses supporters May 19, 2017, outside the Ecuadorian embassy in London, where he has been in self imposed exile since 2012. (AP Photo)

About a dozen years ago, an enigmatic, silver-haired hacker from Australia launched a web portal that grew to become, in his words, "a giant library of the world's most persecuted documents."

WikiLeaks, under the guidance of founder Julian Assange, has since published more than 10 million documents on war, spying and corruption.

The group earned notoriety in U.S. national security circles in 2010 for leaking footage of an American airstrike that killed Iraqi journalists. It would later dump more than 250,000 classified U.S. diplomatic cables, and hundreds of secret files on the Guantanamo Bay military prison.

But after WikiLeaks amplified Russia’s 2016 election interference, it fueled suspicions that the group — which holds itself out as an equal opportunity, no-holds-barred anti-secrecy outfit — had acted as the Kremlin’s co-conspirator.

The precise nature of WikiLeaks’ relationship to Moscow is not publicly known. A PolitiFact analysis found a documented pattern in which both parties’ interests appeared to align. Elements of the relationship might be clarified in Special Counsel Robert Mueller’s investigation, though a full accounting of their possible coordination may never be known.

Assange has been holed up in the Ecuadorian Embassy in London for the past six years to avoid what he says is a politically motivated scheme to extradite him to the United States.

Yet according to the U.S. intelligence community, even while Assange was in exile, WikiLeaks played a key role in Russia’s 2016 election interference.

The agencies have concluded the Russian government and President Vladimir Putin favored Donald Trump over Hillary Clinton in the 2016 election. To help Trump’s odds, Russian hackers stole emails belonging to Democratic organizations and Clinton campaign chairman John Podesta and relayed them to WikiLeaks. 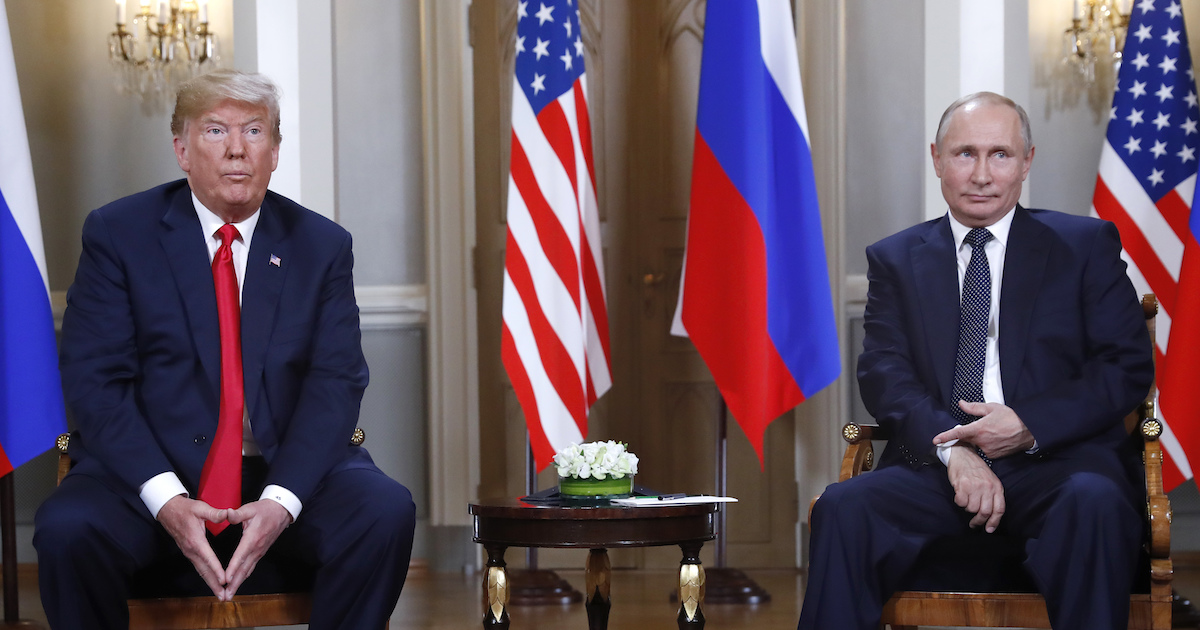 U.S. President Donald Trump and Russian President Vladimir Putin sit on their chairs at the beginning of a one-on-one meeting at the Presidential Palace in Helsinki, Finland, on July 16, 2018. (AP)

The first tranche — nearly 20,000 emails — revealed an embarrassing glimpse at internal deliberations among the Democratic National Committee. The correspondence appeared to show the party apparatus conspiring to boost Clinton and undermine her rival Bernie Sanders.

The emails sparked Democratic infighting just as the party sought to coalesce support for Clinton.

The next big WikiLeaks dump of damaging Clinton information came the month before the election, on Oct. 7.

That afternoon, the Washington Post published video of a 2005 interview with Access Hollywood in which Trump boasted that his celebrity status enabled him to grope women.

"I’ve got to use some Tic Tacs, just in case I start kissing her," Trump told interviewer Billy Bush. "You know I’m automatically attracted to beautiful — I just start kissing them. It’s like a magnet. I just kiss. I don’t even wait. And when you’re a star, they let you do it. You can do anything. Grab ‘em by the p---y."

Less than an hour after the Trump tape went public, WikiLeaks revealed it had received 50,000 of Podesta’s emails. It released an initial tranche of around 2,000 of the Clinton campaign chairman’s messages.

The timing of the Podesta email release fueled suspicions that WikiLeaks wanted to distract from the Access Hollywood news.

Did WikiLeaks work with Russia?

A number of documented instances where WikiLeaks' and Russia's interests have lined up through the years raises questions about whether this alignment is purely coincidental, or if a more direct relationship was behind WikiLeaks’ conduct in 2016.

In August 2016, the New York Times reported that the "emerging consensus" among U.S. officials was that Assange and WikiLeaks "probably have no direct ties to Russian intelligence services." That was prior to the Oct. 7 dump, however.

The public version of the U.S. intel community assessment — published two months after the election — does not discuss their relationship with any real depth.

And the Trump administration has said little on the subject, other than an April 2017 remark from Trump’s then-CIA chief Mike Pompeo.

"It is time to call out WikiLeaks for what it really is: a non-state hostile intelligence service often abetted by state actors like Russia," Pompeo said at the Center for Strategic and International Studies.

Special Counsel Robert Mueller has alleged in indictments that Russian intelligence operatives, posing as the online persona Guccifer 2.0, transferred the Democratic materials to WikiLeaks, which is identified as "Organization 1."

Russia denies having interfered in American politics. WikiLeaks has long claimed Moscow was not its source of the emails.

"Our source is not the Russian government," Assange told Fox News’ Sean Hannity. "It is not state parties."

Experts are divided on whether WikiLeaks acted wittingly or unwittingly while advancing Russia’s election interference.

"The idea that WikiLeaks was acting as an unwitting agent of the Russian government has never been plausible," said former U.S. intelligence analyst Ned Price, noting that Russia had been publicly blamed for hacking the Democratic computers prior to WikiLeaks’ disclosures.

"We have to remember the people behind the operation are not naifs—technical or otherwise," Price said of WikiLeaks. "This outfit knew exactly what it was doing and who was behind its ill-begotten goods."

Catherine Fitzpatrick, a longtime chronicler of Kremlin activity and a former human rights activist, went a step further, describing WikiLeaks as an "agent of influence," or asset, for Russia.

"It isn't just a coincidence that the foreign policy goals of Russia and WikiLeaks are the same," said Fitzpatrick, now a Russian translator and analyst at The Interpreter. "They align because WikiLeaks collaborates with the Russian government."

Bradley Moss, a national security lawyer, says Assange’s actions appear to demonstrate a personal grudge against Western intelligence agencies. Still, he’s not buying the argument that WikiLeaks worked hand in glove with Russia during the election.

"There are certainly reasons to suggest that Assange and his team were disturbingly naive, and arguably even deliberately so," said Bradley Moss, a national security lawyer. "But no evidence has emerged yet to suggest that WikiLeaks truly knew exactly how much they were being used."

Still others say Assange is an opportunist who sees himself as exploiting Russia, instead of the other way around.

Will we soon learn more about WikiLeaks’ relationship with Moscow?

The short answer is: maybe.

Special Counsel Robert Mueller has shown interest in the Trump campaign’s contacts with WikiLeaks, so it’s possible his final report sheds light on the WikiLeaks-Russia relationship. 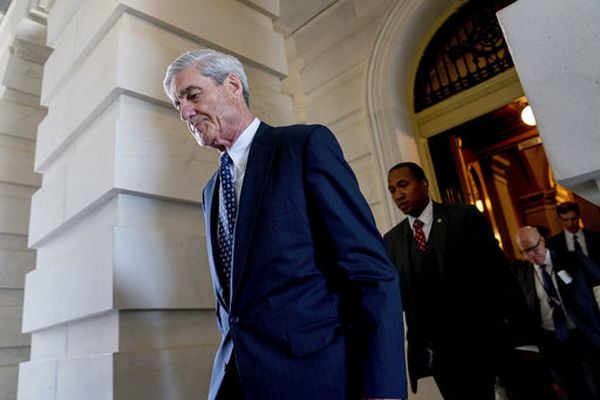 Separately, Assange’s name was accidentally revealed in a November 2018 federal court filing in Virginia, in a case seemingly unrelated involving a man accused of coercing sex from a minor. The inadvertent reference to Assange suggested he could see criminal charges.

The filing states that the charges and arrest warrant "would need to remain sealed until Assange is arrested in connection with the charges in the criminal complaint and can therefore no longer evade or avoid arrest and extradition in this matter."

Elsewhere in the filing, the prosecutor states that "due to the sophistication of the defendant and the publicity surrounding the case, no other procedure is likely to keep confidential the fact that Assange has been charged."

It’s unclear what charges the filing is referring to, and whether they might relate to WikiLeaks’ release of Russian-hacked materials. But the disclosure of Assange’s name gave ammunition to his long-standing theory that he is being secretly pursued by U.S. law enforcement.

For now, the best evidence available for gauging WikiLeaks relationship to Russia is circumstantial.

A New York Times analysis in August 2016 of WikiLeaks’ activities during Assange’s period of exile and found a distinct pattern.

"Whether by conviction, convenience or coincidence," the New York Times wrote, "WikiLeaks’ document releases, along with many of Mr. Assange’s statements, have often benefited Russia, at the expense of the West."

The New York Times also noted that in 2012, as WikiLeaks was running out of money, a television program hosted by Assange began airing on the Kremlin-financed news organization Russia Today.

Michael Weiss, an editor at the Daily Beast and columnist at Foreign Policy, said WikiLeaks has declined to publish material that might have embarrassed the Russian government.

He cited a document that showed a state-owned Russian bank propping up the economy of Syrian President Bashar al-Assad. The document was in WikiLeaks’ possession, but was only obtained through leaked court documents.

The magazine Foreign Policy also reported that WikiLeaks turned down "a large cache of documents related to the Russian government" during the 2016 campaign, opting instead to publish Democratic documents that had been flagged as stolen by Russian hackers.

"That's one hell of a coincidence," Weiss said, referring to the record of WikiLeaks’ and Russia’s congruent interests. "If you're a U.S. intelligence officer you don't believe in such coincidences."

Bradley Moss, a national security attorney, in The Atlantic, "Julian Assange Isn’t Worth It," Nov. 19, 2018

Email interview with Michael Weiss, an editor at the Daily Beast and columnist at Foreign Policy, March 8, 2019

Email interview with Walter Slocombe, former Under Secretary of Defense for Policy, March 5, 2019

Email interview with Catherine Fitzpatrick, a Russian translator and analyst at The Interpreter, March 9, 2019