Are New Yorkers really fleeing to Florida over taxes?
By Amy Sherman March 29, 2019

Florida Republican Sen. Rick Scott says he knows why New Yorkers are fleeing to Florida, and it isn’t so much about craving the sunshine and beaches.

It’s about Florida’s tax climate, Scott said in a series of national media appearances in March.

"Want to know why hundreds of thousands of people have left New York and moved to Florida? I’ll be joining @SquawkCNBC at 7:45AM to talk about it. (Hint: lower taxes)," Scott tweeted March 20.

In an op-ed for the Wall Street Journal, Scott wrote: "There’s a reason Florida surpassed New York as the third-largest state. There’s a reason Rep. Alexandria Ocasio-Cortez’s mom left New York for Florida." (Blanca Ocasio-Cortez told the Daily Mail that  she moved to Eustis, near Orlando, Florida, when she could no longer afford the New York area, and her real estate taxes nosedived.)

Scott did give a nod to the Sunshine State’s weather advantage in an appearance on Fox and Friends: "Here is the reason people are coming: lower taxes, the weather is better."

It’s possible that some New Yorkers are drawn to Florida because the state has no personal income tax. But we did not find enough evidence to show to what extent taxes play a role in decisions by New Yorkers to move to Florida. We decided not to rate Scott’s statements on our Truth-O-Meter.

"Bottom line: there is no slam-dunk, authoritative study explaining why people in general move, or why subgroups move," said Edmund J. McMahon, research director at the conservative Empire Center for Public Policy.

In terms of migration numbers, there is a steady stream of New Yorkers coming to Florida.

The U.S. Census Bureau data tracks how many people migrate each year between states. The data for 2015-17 showed that of the approximately 20 million residents in Florida, between 60,000 and 70,000 said they lived in New York the year before. But this migration pattern long pre-dated Scott.

The best source of data we found on why New Yorkers move to Florida comes from the University of Florida’s Bureau of Economic and Business Research, which conducts a random telephone survey of about 6,000 Florida residents each year. For those who were not born in Florida, researchers ask respondents about their primary reason for moving to Florida. One key caveat: the data combines people who moved recently with those who arrived long ago.)

The top three reasons that New Yorkers  moved to Florida, according to the 2018 survey, were family, the weather and jobs.

Those reasons aren’t unique to New York. They hold for people who moved to Florida from any state.

The researchers don’t offer "low taxes" as an answer choice, but it’s possible some respondents chose "low cost of living" as the closest substitute.

Also, when a respondent selects "other," the interviewer asks for a more specific answer. Mark Girson, a UF researcher who pulled the data for us, looked at those answers and found 1.3 percent of those that said they moved to New York from Florida due to taxes.

New York Gov. Andrew Cuomo, a Democrat, has a different take from Scott about why New Yorkers may look to Florida to move. He blames national Republican tax policy.

Cuomo says the 2017 federal tax law capping the SALT deduction for state income and property taxes creates a higher economic incentive to move out of New York. It’s too soon to know whether that change has played a role in migration.

The 2017 federal law capped how much taxpayers could deduct their state and local taxes from their federal taxes — something that New Yorkers, who have higher property taxes, had taken advantage of in the past. The new tax law now caps SALT deductions at $10,000. A Cuomo spokesman told us that the average statewide SALT deduction is more than twice the cap ($22,168).

Christopher McCarty, director of the University of Florida's Bureau of Economic and Business Research, said the change in the SALT deduction may have created some push to Florida, but retirees likely had a long-term plan to move to the state.

Retirees are moving to Florida based on income from Social Security, retirement investments, and in many cases the money they make off the sale of their home in New York.

We found one other national study from United VanLines, a moving company. It is based on household moves, which included about 150 people who moved from New York to Florida in 2018. More than 50 percent of that group said they moved due to retirement while other common reasons were due to a job change or lifestyle change. Taxes isn’t a category that United VanLines offers on that survey. No respondents mentioned taxes in response to an open-ended question.

On average for the past six years, about 14 percent of the out-migration from New York has been to Florida, said Laura Schultz, director of fiscal analysis & senior economist at the Rockefeller Institute of Government think tank affiliated with the State University of New York.

The other states that New Yorkers often move to are New Jersey, Pennsylvania, California and Connecticut.

"I wouldn’t consider New Jersey, or California or Connecticut low-tax states," she said, speaking about personal income and property taxes.

Looking back over a decade at net migration overall, the biggest New York losses and Florida gains occurred just before the 2007-09 recession, said William H. Frey, a demographer and fellow at The Brookings Institution. They began to rise again in recent years before last year's slight decline. Shifts in the job and housing markets made Florida somewhat less attractive to New Yorkers (and elsewhere) during the recession. 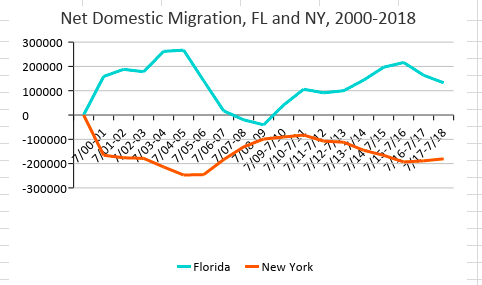 "It may be that relative taxes impact a small segment of the population who have large incomes and are willing to move to save tax money," he said. "But my view is that most migrants in the New York to Florida stream are making decisions based on climate, general quality of life and major shifts in the economy, like the recession and regional housing market declines."

That’s the story for regular folks. It might be different for millionaires (like Scott). A team of researchers at Stanford researched migration by millionaires, looking at IRS data from 1999 to 2011. Florida was the leading destination for millionaire migration, they found, noting that Florida was attractive in other unique ways, such as coastal access to the Caribbean Sea.

One of those researchers, Cristobal Young, now a sociology professor at Cornell University, told us it’s hard to say how much taxes are driving such moves. More millionaires in Texas and Tennessee also move to Florida on net, even though there is no tax benefit, he said.

"I suspect a handful of high-income earners in New York will move to Florida under the new tax law, but not enough to matter for tax policy," he said.

Daily Mail, EXCLUSIVE: 'God played quite a joke on me with this politics stuff!', March 4, 2019

TurboTax, States with the Highest and Lowest Taxes, Tax year 2018

PolitiFact, Will Weatherford says 1,000 people a day move to Florida because of freedom, April 2, 2013

Interview, William H. Frey, a demographer and fellow at The Brookings Institution, March 25, 2019

Interview, Edmund J. McMahon, an adjunct fellow at the Manhattan Institute and research director of the Empire Center for Public Policy, March 26, 2019