A sign overhead on an unusually quiet highway reminds drivers to "Stay home, limit travel, save lives" as part of Washington Gov. Jay Inslee's ongoing stay-at-home order in the midst of the coronavirus, April 1, 2020, in Monroe, Wash. (AP/Elaine Thompson)

Millions of Americans are staying home under the orders of state and local officials due to the coronavirus pandemic.

Well, they’re supposed to be. Without a federal lockdown policy, people who break state and local restrictions face a patchwork of penalties for their non-essential pursuits.

The goal of stay-at-home policies is to slow the spread of the virus by restricting Americans to their most "essential" trips, such as groceries, medicine pick-up and medical treatment.

Officials have said they expect voluntary compliance. But some are also imposing fines, charging and arresting people who authorities say are not following orders.

So far, a pastor in Florida, a party host in New Jersey, and tobacco shops in California are among those facing charges or fines for challenging local orders.

Given the mix of policies in place, we wanted to explain the scope of penalties and enforcement — and the potential constitutional challenges therein.

In lieu of federal guidance, states are left to do what they think is best, with varying levels of severity and enforcement.

"We’re just trying to take the best advice we can from the scientists and all of the experts and making the decisions that we believe are necessary for our states," said Maryland Gov. Larry Hogan, a Republican who leads the National Governors Association, in a statement.

At least 36 states, Washington, D.C. and the U.S. Virgin Islands had some form of a stay-at-home order, as of April 1 (though some only apply to specific counties or specific age groups, or were only a guidance). Others have put caps on the number of people who can gather in one place or have restricted operations at restaurants, gyms, salons and entertainment venues.

Hogan’s stay-at-home order for Maryland says that people who violate the order are guilty of a misdemeanor and subject to one year in jail or a fine up to $5,000, or both. Other jurisdictions have also warned that they’ll levy fines for violations.

Facing the highest number of confirmed COVID-19 cases, Gov. Andrew Cuomo’s "New York State on Pause" order closed on March 22 all non-essential businesses statewide and told people to stay home unless they are workers providing essential services. A penalty for people violating the order wasn’t specified. But the governor has said that businesses that do not comply will face a civil fine and mandatory closure.

New York City is doing spot checks on subway cars to make sure people are not overcrowding cars and are staying apart. The city has also taken down at least 80 basketball hoops at public playgrounds and said it would take down nets from tennis courts or soccer fields where people are violating orders. 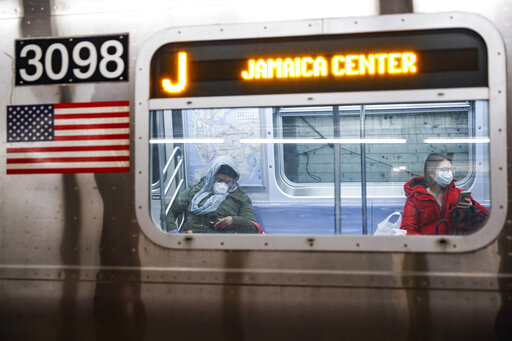 Subway riders wear protective masks and gloves on a sparsely populated car during morning hours due to COVID-19 concerns that are driving down ridership, March 19, 2020, in New York. (AP/John Minchillo)

In Florida, local authorities on March 30 arrested the pastor of a Tampa megachurch, saying he held church services repeatedly in violation of local orders that restrict large gatherings and advise people to stay home. Rodney Howard-Browne was charged with two second-degree misdemeanors for unlawful assembly and violation of public health emergency rules.

"I’d remind the good pastor of Mark 12:31, which said there’s no more important commandment than to love thy neighbor as thyself," said Hillsborough County State Attorney Andrew Warren at the announcement of an arrest warrant for the pastor, referring to the Bible verse. "Loving your neighbors is protecting them, not jeopardizing their health by exposing them to this deadly virus."

Like other Florida cities and counties, Hillsborough County had moved ahead of the state in issuing its own stay-at-home restrictions. Florida Gov. Ron DeSantis on April 1 announced a statewide order directing Floridians to "limit movements and personal interactions outside the home," with exceptions for essential services and activities. The order, effective April 3, included going to religious services in churches, synagogues and houses of worship as essential activities.

In New Jersey, the state with the second-highest number of cases, police in a Trenton suburb had to break up a party with 47 people crammed into a 550-square-foot apartment. The host, a 54-year-old man, was charged; the partygoers were dispersed but not charged.

"The organizer was charged, as they should have been and deserved to be," Gov. Phil Murphy tweeted March 28. "This is not a game. Stay home. Be smart."

Murphy went on Twitter again that day to say he was serious.

"Can’t believe I have to say this at all, let alone for the second time. But here we are. NO CORONA PARTIES," Murphy tweeted. "They’re illegal, dangerous, and stupid. We will crash your party. You will pay a big fine. And we will name & shame you until EVERYONE gets this message into their heads."

Can’t believe I have to say this at all, let alone for the second time. But here we are.

We will crash your party. You will pay a big fine. And we will name & shame you until EVERYONE gets this message into their heads.

In Newark, N.J., police have issued at least 161 summonses and shut down at least 15 non-essential businesses that authorities say violated the governor’s directive, according to nj.com.

In Hawaii, the Star Advertiser reported that Honolulu police had issued at least 70 citations and arrested two people for allegedly violating stay-at-home orders. Violation of the state order is a misdemeanor, which can lead to a fine up to $5,000, up to one year in jail, or both.

Police in Kaua‘i said they would conduct islandwide checkpoints in support of the governor’s stay-at-home order.

In Fresno, Calif., authorities issued $1,000 fines to three tobacco stores that allegedly stayed open in defiance of a shelter in place order. The stores have temporarily closed down, reported yourcentralvalley.com.

Are the stay-at-home orders open to legal challenges?

In Florida, the state attorney said the Tampa pastor was "hiding behind the First Amendment," even though "it’s absolutely clear that emergency orders like this are constitutional and valid."

But Liberty Counsel, a litigation group representing Howard-Browne, said the church complied with the county’s order and that police actions were "discriminatory against religion and church gatherings."

There is little modern experience regarding restrictions on religious gatherings during stay-at-home orders.

But if churches were to sue states and municipalities over their orders, law professors told PolitiFact they might argue that the orders violate the Free Exercise Clause in the First Amendment or a state Religious Freedom Restoration Act.

Governments are more likely to win legal challenges if their stay-at-home orders address a compelling government interest, don’t target religious groups, and are evenly applied, with exceptions for only the most essential functions, experts said.

Phone and email interview, Caroline Mala Corbin, a law professor at the University of Miami School of Law, March 30, 2020

State of New York, Guidance for determining whether a business enterprise is subject to a workforce reduction under recent executive orders, updated March 27, 2020; New York State on PAUSE; Executive Order No. 202.8; Executive order 202.6