A look at Susan Rice, Benghazi, and unmasking

Then-United Nations Ambassador Susan Rice arrives for a meeting on Capitol Hill on Nov. 28, 2012 to discuss the Benghazi attack on Sept. 11, 2012. (AP)

• Trump aides and allies have criticized Rice’s involvement in the Obama administration’s response to the 2012 killing of four Americans in Benghazi, Libya, as well as her role in “unmasking” of Trump’s incoming national security adviser, Michael Flynn, from intelligence reports.

• On Benghazi, Republicans criticized what she said about the attacks in their immediate aftermath on Sunday news shows.

• On unmaskings, officials make thousands of requests each year to reveal identities mentioned in intelligence reports, and it’s been a common practice in both the Obama and Trump administrations.

Joe Biden hasn’t chosen a vice presidential nominee yet, but the preemptive attacks are already underway online and among conservative commentators.

One of their targets is Susan Rice, a former senior official in President Barack Obama’s administration.

Aides and allies of President Donald Trump have focused on two episodes in particular: Rice’s involvement in the administration’s response to the 2012 killing of four Americans in Benghazi, Libya, and her role in "unmasking" of Trump’s incoming national security adviser, Michael Flynn, from intelligence reports. During the former, she was serving as ambassador to the United Nations; during the latter, she was national security adviser.

One of the most direct attacks came from Fox News host Tucker Carlson, who called her "a threat."

"Say what you will about Susan Rice and we're about to, but she is not a buffoon," Carlson said, adding, "Susan Rice knows exactly what she wants and she understands the system well enough to get it."

The left of the Democratic Party is also unhappy with Rice being a vice presidential contender, because of her advocacy of military action in Obama-era policy in such countries as Libya, Syria and Yemen.

With Rice’s role in Benghazi and unmasking likely to come up again — if she’s not tapped as Biden’s running mate, she could be a candidate for another role on his foreign policy team — we decided to dig into our archives to recap what both incidents were about.

What happened at Benghazi?

In 2012, U.S. diplomatic workers were staffing a temporary residential outpost in the Libyan city after the death of dictator Moammar Gadhafi.

On a night the U.S. ambassador, Christopher Stevens, was visiting from the capital in Tripoli, armed Islamic terrorists attacked, setting a toxic diesel-fueled fire that killed the ambassador and a colleague. Americans then drove, chased by attackers, to a nearby annex, where a mortar attack in the morning killed two security contractors. By noon, a scramble by the American and Libyan governments got U.S. workers to safety in Tripoli, along with the bodies of their four colleagues.

The main connection between Rice and Benghazi is her appearance on several Sunday morning news shows shortly after the attack. She was accused of downplaying the possibility that a planned terrorist act had led to the deaths. Instead, she suggested the attacks flowed from public protests at U.S. facilities throughout the Arab world following news reports about a movie made in the U.S. that mocked Islam.

Our review of transcripts found that Rice consistently emphasized the importance of the video, and in only one of the five interviews did Rice speak the words "al-Qaida."

Rice repeatedly referred to "non-al-Qaida Libyan extremists" possibly being involved, but Rice portrayed these extremists as opportunists who seized the moment, not part of a pre-planned terrorist attack. In fact, she told CBS’s "Face the Nation" that "we do not have information at present that leads us to conclude that this was premeditated or preplanned."

In Rice’s 2019 memoir, "Tough Love," she wrote that she had become a convenient "villain" for conservative media. Because her comments seemed to blame an American-made video rather than the individuals’ killers, this made her a "recyclable boogeyman."

"I acknowledge that there were some words and phrases I uttered on Sunday, Sept. 16, that I wish I could restate with more precision, less certitude, or not have said at all," she wrote. "None of them materially changed the substance of what I said, but they offered fodder for my critics to pick at."

This year, Rice told ABC’s "This Week" that congressional panels had found no wrongdoing on her part. "Not one of them found that I had deliberately misled the American people," Rice said, adding that the line of attack against her "is dishonest, and it’s a distraction."

Alan J. Kuperman, an associate professor at the University of Texas’ Lyndon B. Johnson School of Public Affairs, said her television appearances exemplified "ambition and political loyalty" and fell short on honesty.

Daveed Gartenstein-Ross, the CEO of Valens Global, a counterterrorism consulting firm, said Rice has a reputation for competence. But he added that the account by Michael Morell, who at the time of the Benghazi attack was the deputy CIA director, does raise concerns.

In his 2015 memoir, "The Great War of Our Time: The CIA's Fight Against Terrorism—From al Qa'ida to ISIS," Morell wrote, "A good bit of what (Rice) said was consistent with the CIA points, but she also said that the video had led to the protests in Benghazi. Why she said this I do not know. It is a question that only she can answer."

Michael O’Hanlon, a foreign policy specialist at the Brookings Institution, said that Rice might have been "more careful in her remarks, which in retrospect were far from perfect, but she wasn’t egregiously guilty, and she wasn’t making talking points up herself."

John Pike, the director of globalsecurity.org, said the seeming contradictions in the talking points were "not her fault, and I don't think she could be expected to air internal intelligence disputes on the Sunday chats." 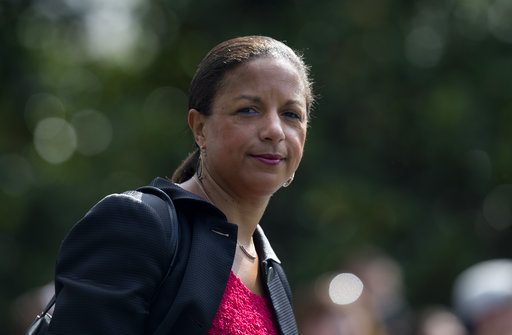 Then-National Security Adviser Susan Rice follows President Barack Obama across the South Lawn of the White House to board Marine One. (AP)
Rice’s involvement in "unmasking"

The other controversy being raised by Trump allies involves "unmasking."

What is unmasking? It’s when senior government officials request the identity of an American citizen who has appeared unnamed in intelligence reports about certain communications, such as intercepted phone calls. The idea is that national security officials, at least in some cases, need to know the identity in order to understand the intelligence.

Usually, American identities are protected in reports on communications involving people under investigation or surveillance. This is called "minimization," and it’s partly why data collection under Section 215 of the Patriot Act is considered legal and not unduly intrusive. Americans’ communications are not monitored unless they are under investigation, but it’s possible for them to be caught up unintentionally if they communicate with a foreign individual under surveillance.

Data suggests that unmasking is not an unusual practice. According to data released annually by the director of national intelligence, there were 9,217 unmasking requests made of the National Security Agency between September 2015 and August 2016, and 9,529 in 2017. In the full years under Trump, the number rose to 16,721 in 2018 and 10,012 in 2019.

Rice acknowledged to House investigators in September 2017 that she had unmasked Flynn and other Trump officials to understand why the crown prince of the United Arab Emirates was in New York in late 2016, during the transition before Trump took office, CNN reported.

Flynn resigned as Trump’s national security adviser in February 2017, just weeks into the new administration, amid reports that he lied about conversations he’d had with senior Russian officials that may have addressed lifting sanctions on Russia that Obama had imposed.

Many Republicans allege that Rice and other Obama administration officials abused their authority by unmasking Trump officials, including Flynn. They also allege that Rice lied when she was asked in the 2017 PBS interview whether she knew that Flynn and others "may have been caught up in surveillance of foreign individuals and their identities may have been disclosed." Rice responded, "I know nothing about this."

Rice told MSNBC in 2017 that "the allegation is that somehow Obama administration officials utilized intelligence for political purposes. That is absolutely false." She added in her memoir that "it is completely false to suggest that asking for the identity of an American person is the same as leaking it."

Democrats point to the statistics to support their argument that the unmasking inquiries were nothing out of the ordinary. Former Obama national-security spokesman Tommy Vietor tweeted that for officials like Rice, it's "literally their job to understand intel to help make informed decisions."

Michael Morell, "The Great War of Our Time: The CIA's Fight Against Terrorism—From al Qa'ida to ISIS," 2015

PolitiFact, "Fact-checking Benghazi: The rhetoric hasn't matched up with reality," May 16, 2014