The RNC featured Pompeo in Jerusalem and official White House acts. Is that legal?

First Lady Melania Trump arrives to speak on the second night of the Republican National Convention at the White House Rose Garden on Aug. 25, 2020. (AP)

• The second night of the Republican convention was notable for breaking longstanding traditions, and possibly laws, against mixing politics and government.

• Such moves drew criticism, on the grounds that top members of the Trump administration were using the powers of governmental office to advance the president’s reelection.

The second night of the Republican convention was notable for breaking longstanding traditions, and possibly laws, against mixing politics and government.

• First Lady Melania Trump giving her convention address to an audience assembled in the Rose Garden of the White House.

• Secretary of State Mike Pompeo giving a convention address, unlike previous secretaries of state in both parties, and doing so from Jerusalem.

• Trump holding a separate pardon ceremony from the White House.

Such moves drew criticism, on the grounds that top members of the Trump administration were using the powers of governmental office to advance the president’s reelection.

Not only did such activities break decades-old norms for the national conventions, but they may also have violated the Hatch Act, a 1939 law that limits government officials from mixing political activities with their official duties.

Officials told the Associated Press that lawyers from the White House, the Trump campaign, and the Republican National Committee reviewed convention plans to avoid any Hatch Act violations. They cited precedents such as Franklin D. Roosevelt delivering his acceptance speech from the White House in 1940 and prior presidents filming political videos in the White House residence.

"Any government employees who may participate will do so in compliance with the Hatch Act," White House spokesman Judd Deere said in a statement.

But experts on government ethics have cried foul.

"A reminder that using government locations, government functions, and executive branch officials as part of a giant political campaign event is anti-democratic and in many cases illegal," tweeted Noah Bookbinder, executive director of Citizens for Responsibility and Ethics in Washington. "They keep blowing through law and democratic principles and assume no one will care."

Susan Hennessey and Scott Anderson, fellows at the Brookings Institution, wrote in the Washington Post that the convention appearances were "a bold and bright-line declaration that the values themselves don’t matter."

While the president and vice president are not covered by the Hatch Act, other government officials would fall under its parameters. For example, it would cover Acting Homeland Security Secretary Chad Wolf, who appeared with Trump at the naturalization ceremony.

"The naturalization ceremony is a violation of the Hatch Act for Wolf," Barbara McQuade, former U.S. Attorney for the Eastern District of Michigan, told PolitiFact. And Trump’s participation in such untraditional events has an impact, she said. "When the leader flouts the law, respect for the law is eroded." 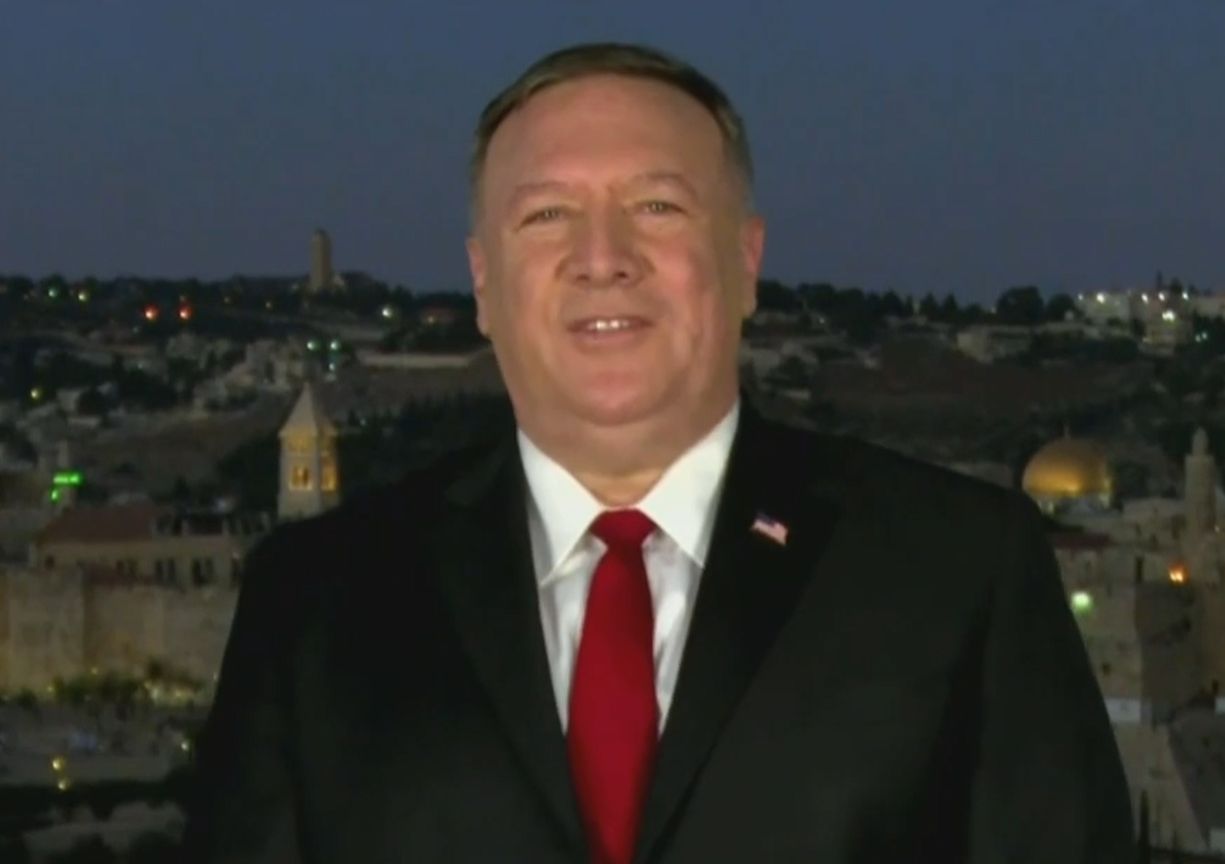 Hours before Pompeo’s speech, Rep. Joaquin Castro, D-Texas, who chairs the House Foreign Affairs subcommittee on oversight, announced an investigation into whether Pompeo had violated the Hatch Act by giving his address.

"The Trump administration and Secretary Pompeo have shown a gross disregard not only of basic ethics, but also a blatant willingness to violate federal law for political gain," Castro said. "Congress has a responsibility to stand up for the rule of law and hold them accountable for this corrupt behavior."

In fact, media reports cited documents indicating that Pompeo was violating the same State Department standards that his administration had recently reminded employees about.

In a February memo, Deputy Secretary of State Stephen Biegun told State Department employees that "in my case, as a Senate confirmed Department official, I will be sitting on the sidelines of the political process this year and will not be attending any political events, to include the national conventions."

Politico reported that Pompeo himself sent a memo to all diplomatic and consular posts last month to remind them of these policies.

The State Department said that campaign and party funds, rather than official government resources, were used to enable Pompeo’s speech, though some experts questioned whether that was truly possible with the security and logistical requirements of having the secretary of state overseas.

In the meantime, some observers expressed concern about practical consequences, namely how such a speech could harm U.S. interests.

"Foreign countries count on a degree of continuity in national policy from administration to administration," Barnett Rubin, a senior fellow at New York University's Center on International Cooperation. "The more that foreign policy is — and is seen to be — used for purely partisan objectives, the less other countries will believe that the policy will carry over to the next administration. If they do not like the policy, it encourages them to wait it out till the next election rather than to respond immediately."

Susan Hennessey and Scott R. Anderson, "Trump is going out of his way to blow off the Hatch Act this week" (Washington Post op-ed), Aug. 25, 2020