Casting and counting the electoral votes: What to expect

Presidential electors and state officials in Michigan pose in the state senate chamber after voting, on Dec. 19, 2016, in Lansing. (AP)

• Every state has now certified its vote, including the states where legal challenges were made. As a result, electoral votes are teed up to be cast on Dec. 14.

• Congress officially counts the electoral votes in a joint session at 1 p.m. on Jan. 6. There is one last-ditch option for supporters of President Donald Trump to derail the process, but implementing it is complicated.

• A senator would have to join a House member in objecting to a state’s slate of votes, and the narrow Republican majority in the Senate would have to stick together to approve the objection. But even if both of those things occurred, the Democratic-held House would not go along, and because both chambers must agree to an objection, the effort would fail.

We are now just days away from the quadrennial meeting of the Electoral College on Dec. 14, followed by Inauguration Day on Jan. 20. Forgotten your high school civics class or never learned it in the first place? Here’s a guide to what will happen between now and then.

Will the electors vote on Dec. 14?

Yes. By now, the "safe harbor" date has passed — that’s the date that, by law, election results that have been certified are considered conclusive for the purposes of determining which electoral slate casts a state’s votes. Safe harbor is like a "super shield" protecting the electoral votes from changing, said Ned Foley, an Ohio State University law professor who specializes in elections.

This year, the safe harbor date was Dec. 8. Every state has now certified its vote, including the ones where legal challenges were made. As a result, "there’s no doubt we will have the votes of the electors cast on Dec. 14," Foley said. 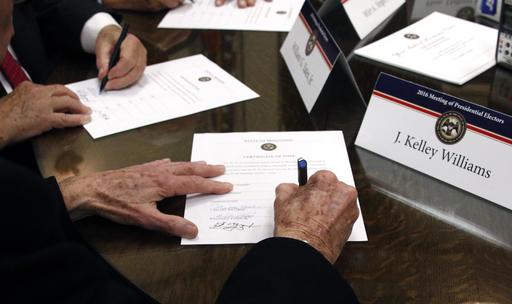 Electors from Mississippi sign certificates in the process of formally casting their electoral votes in the 2016 election at the state capitol in Jackson, Miss. (AP)

How does the process of casting electoral votes work?

On Dec. 14, the electors sign and seal six certificates listing their votes for president and vice president. One certificate is sent to Congress, two are sent to the secretary of state in their state, two are sent to the National Archives, and one is sent to the court of the district in which the electors have assembled. (If these certificates don’t arrive by Dec. 23, either the sitting vice president or the archivist of the U.S. "shall send a special messenger to the district judge" who must hand over his original copy in person. Failure to do so brings a $1,000 fine.)

What are "faithless" electors?

The number of electoral votes earned by each candidate could vary from what they seemed to have won in the election, if "faithless" electors decide to vote for someone other than the candidate voters chose. This has happened occasionally, in small numbers, in recent decades. As recently as 2016, two Texas electors didn’t vote for Donald Trump and a Hawaii elector and four Washington state electors didn’t vote for Hillary Clinton. But it has never been enough to shift the result.

When do the electoral results truly become official?

Congress officially counts the electoral votes in a joint session at 1 p.m. on Jan. 6.

Four "tellers" — two from the House, two from the Senate — read the certificates from the states and the District of Columbia and count the electoral votes. The electoral certificates are unsealed and counted in alphabetical order by state. The presiding officer announces the result. If there are no interruptions, this takes 20 to 25 minutes.

When the process is complete, the vice president declares a winner. At this point, the election is officially decided and simply awaits the inauguration.

What could be done to upset this process?

The statute governing electoral vote counting in Congress prohibits debate and most motions, but supporters of Trump have one longshot chance to object.

"During the reading of the certificates, an objection may be made in writing, but must be signed by at least one member of each house," said Steven Smith, a political scientist at Washington University in St. Louis.

Because the statute that governs the process says that electoral votes that are "regularly given" and "lawfully certified" must be counted, the objections would likely seek to attack the meaning of these terms, Smith said. At that point, the joint session is suspended so that the House and Senate can separately debate and vote on it. Each chamber decides on its own by a simple majority, said Gregory Koger, a University of Miami political scientist.

The statute sets a debate limit of two hours on each chamber for considering objections, Smith said. "Done repeatedly over several states, this process can consume a great deal of time," he said. 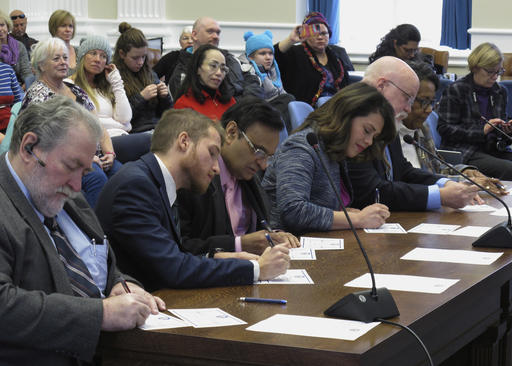 Nevada's six Democratic presidential electors sign their formal ballots at the state capitol in Carson City, Dec. 19, 2016. (AP)
Is any of this a realistic way of securing a second term for Trump?

Not really, thanks mainly to the Democrats’ majority in the House. Because both chambers must agree to an objection, it would fail if only one agrees to it. And if the objection fails, the challenged votes are counted.

"Objections are easily raised, but there is no realistic chance that House Democrats would approve of Republican-sponsored objections," Smith said.

Koger agreed, saying, "There is zero chance a challenge will succeed if the voting falls along party lines."

It may not even get to this point, of course. "At present, some House members have signaled their willingness to support a challenge, but no senator has confirmed that he or she will do so," Koger said.

Recent history is against House members finding a willing senator. "In 2000, 2004, and 2016, we saw multiple objections from House Democrats, but no senator objected, so the objections were not considered," said John Fortier, director of governmental studies at the Bipartisan Policy Center.

If House Republicans did manage to get a senator to co-sign an objection, it would remain a heavy lift for the objectors to get all Senate Republicans to support their cause. Senate Democrats would need to pick off only a couple of institutional-minded Republicans to side with them to make sure that the objection fails. These could include GOP Sens. Mitt Romney of Utah, Lisa Murkowski of Alaska, Susan Collins of Maine, and Pat Toomey of Pennsylvania. All four have already said that Biden is the duly chosen president-elect.

"I am not sure if a senator will go along with the objection," Fortier said. And even if one did, he said, "I am not sure I believe that the Senate would actually reject the votes or slate of electors."

Once the count is gaveled to a close, experts said they can’t imagine any other last-ditch scenarios being available to Trump and his supporters.

"As a practical matter, I don’t think there’s any realistic expectation that Biden’s inauguration is vulnerable to what will happen in Congress on Jan. 6," Foley said.

When is the inauguration?

At noon on Jan. 20, the outgoing president’s term expires, and the winning candidate is sworn in. With that, the 2020 presidential election will finally be over.

CORRECTION, Dec. 15: This article has been updated to clarify that, according to experts in congressional procedure, the presiding officer does not have discretion to rule on whether objections to electoral votes are in or out of order.

National Archives, "The 2020 Presidential Election: Provisions of the Constitution and U.S. Code," Nov. 5, 2020

Procedures at the Joint Session, Including Objections by Members of Congress," Nov. 15, 2016

American Enterprise Institute, "After the People Vote: A Guide to the Electoral College," fourth edition, 2020

Cook Political Report, "Six Scenarios for Confusion in Counting the 2020 Ballots: Not Just Scary Campfire Stories Any More," May 25, 2020

Washington Post, "Here’s when Biden’s win becomes official — and how Trump has been trying to prevent that," Dec. 8, 2020

CNN, "All 50 states and DC have now certified their presidential election results," Dec. 9, 2020

Washington Post, "Where Republicans in Congress stand on Trump’s false claim of winning the election," Dec. 6, 2020

Email interview with Donald R. Wolfensberger, director of the Congress Project at the Woodrow Wilson International Center for Scholars, Dec. 9, 2020