Bloomberg on the defensive, fact-checking the Las Vegas Democratic debate

• Democratic candidates piled on the attacks against Mike Bloomberg in his debate stage debut, from his past comments on the practice of "redlining," New York City's stop-and-frisk policy and the minimum wage.

• The Democrats lobbed their most intense criticisms yet of each other's health care plans. We sort out who exaggerated the facts.

After saying he wouldn’t run and then changing his mind, after altogether skipping Iowa and New Hampshire, after spending $250 million of his fortune on television and radio ads, Mike Bloomberg stood at the end of a debate stage in Las Vegas days before Democrats vote there and got battered by his five opponents.

The talk was a bit different than the "Mike will get it done" line you might have heard on TV.

PolitiFact’s team of fact-checkers examined the veracity of each of those attacks, as well misleading or incomplete claims about the candidate’s health care plans, Bloomberg’s defense of New York’s stop-and-frisk policy, and the donors of the candidates’ campaigns.

These descriptions came from a booklet distributed in 1990 as part of Bloomberg’s 48th birthday, and were reported as words said by Bloomberg.

Images of every page have been posted by the Washington Post. According to the Washington Post, the booklet was produced by Elisabeth DeMarse, Bloomberg L.P.’s former chief marketing officer. She wrote in the introduction, "Yes, these are all actual quotes. No, nothing has been embellished or exaggerated. And yes, some things were too outrageous to include."

In the booklet, the remark is described as referring to members of the British royal family. In full, the quotation reads, "The Royal family — what a bunch of misfits — a gay, an architect, that horsey faced lesbian, and a kid who gave up Koo Stark for some fat broad."

The Guardian, the British newspaper, translated the identities of the royals cited in the quotation as being, in order, Prince Edward, Prince Charles, Princess Anne and Prince Andrew. (We had to refresh our memory on who Koo Stark was. She is an American actress and photographer who once dated Prince Andrew.)

So it’s clear that the quotation appeared in the booklet.

Despite what’s written in the introduction, Bloomberg and his spokespersons have disputed that he actually said that quote, though with somewhat evolving explanations over time.

Neither the Bloomberg campaign nor the Warren campaign responded to PolitiFact on debate night. However, Bloomberg spokesman Stu Loeser told the Post that "Mike simply did not say the things somebody wrote in this gag gift, which has been circulating for 30 years and has been quoted in every previous election Mike has been in."

He added, "Mike openly admits that his words have not always aligned with his values and the way he has led his life, and some of what he has said is disrespectful and wrong."

The Post also reported that a Bloomberg spokesman had said in 2001 that Bloomberg apologized to "anyone that was offended by" the comments, which Bloomberg himself once referred to as "a bunch of Borscht Belt jokes."

"From the moment we passed that signature legislation (Obamacare), Mike called it a disgrace." — former Vice President Joe Biden

Bloomberg said exactly that in a speech at Dartmouth College a few months after the Affordable Care Act passed in March 2010. This claim rates True.

In a video of the speech we reviewed, Bloomberg was unsparing. "We passed a health care bill that does absolutely nothing to fix the big health care problems in this country. It is just a disgrace," he said. "The president, in all fairness, started out by pointing out what the big problems were, but then turned it over to Congress, which didn't pay any attention to any of those big problems and just created another program that's going to cost a lot of money."

Those aren’t standalone remarks. As recently as 2014, Bloomberg called the law "really dysfunctional" during remarks to a financial industry trade group.

It is worth noting that Bloomberg’s current health care plan would build on the Affordable Care Act, largely by increasing subsidies for people buying private insurance on the exchanges, and by installing a Medicare-like public option.

In a July 2008 speech to the Independence Party Of Minnesota, Bloomberg said that both Obama and McCain had shown "on at least some issues, that they are capable of thinking and acting independently of the special interests." Bloomberg said both candidates needed to state where they stood on issues and how they’d get them through Congress.

He said this of Obama: "Sen. Obama — whether you support him or not — has shown a willingness, I think it's fair to say, to stand up to the ideological police on some important issues, such as ending the gun show loophole which puts guns in the hands of criminals, and he is- willing to stand up and say we should maintain the federal gasoline tax during the summer when there was a cry to reduce it."

Bloomberg did endorse Obama’s re-election in 2012, but not until a week before the election. And the endorsement included criticism. Bloomberg said Obama failed to develop and sustain a coalition of centrists that could work on key issues, including immigration and tax reform. Bloomberg also said Obama "engaged in partisan attacks" and "embraced a divisive populist agenda focused more on redistributing income than creating it." 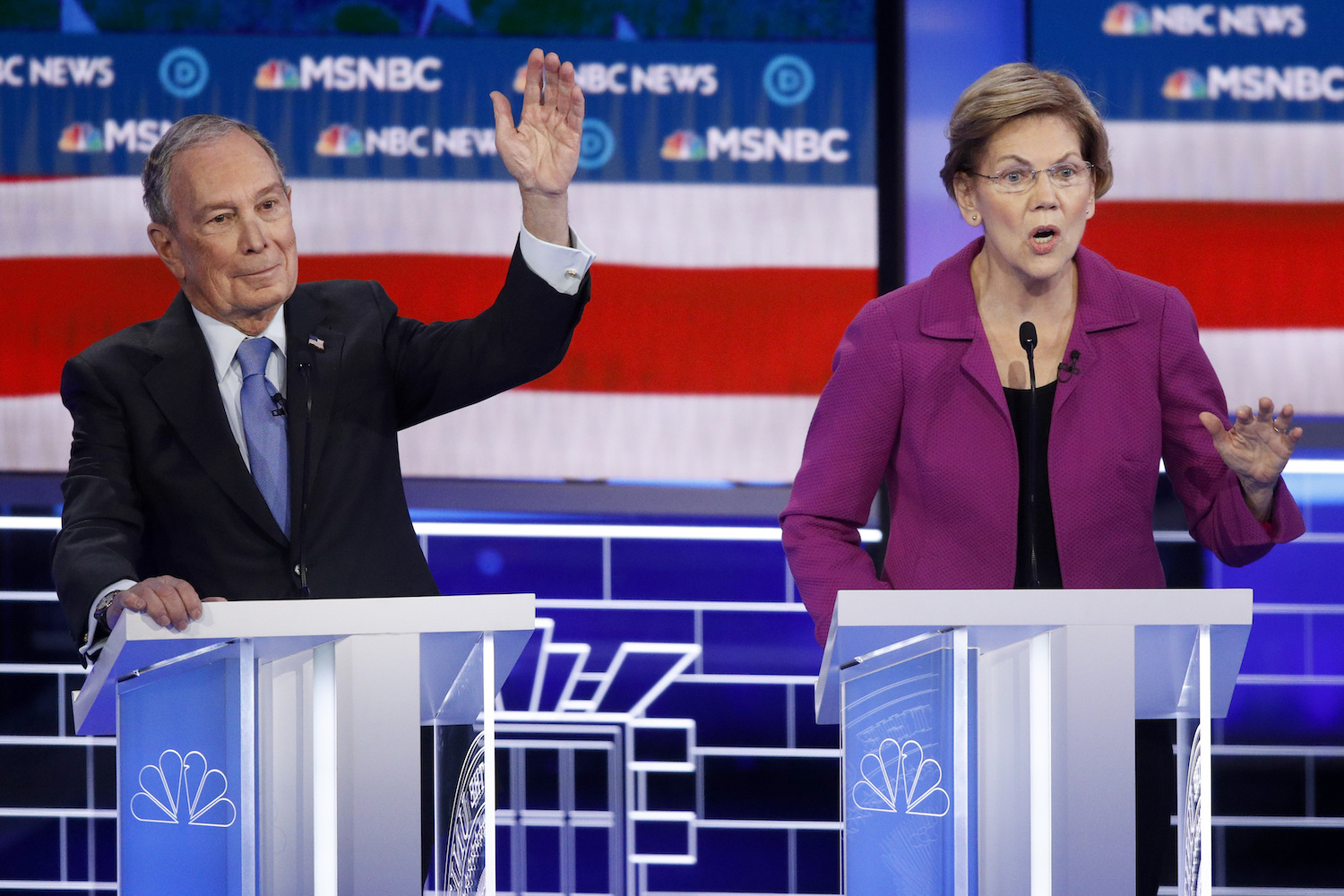 The Warren campaign pointed to what Bloomberg said at a forum in September 2008 at Georgetown University. At various points in the hourlong interview, Bloomberg spoke broadly about loose lending as a factor in the financial crisis. Bloomberg identified pressure by Congress to expand lending after the ban on redlining as one of those causes. The term "redlining" comes from when bankers would draw lines on maps indicating poorer neighborhoods where they would avoid offering mortgages. Those areas often include large minority populations.

Bloomberg did not talk about the racial aspects of redlining or bring up any minority groups. He seemed to define redlining narrowly as excluding loan applicants in poor neighborhoods. And he described a system in which, by enacting a ban on redlining, Congress encouraged banks to give mortgages to people whether or not they could afford them.

In the same interview, Bloomberg talked about how the mortgage crisis accelerated after mortgages were approved too easily for borrowers who didn’t have the means to repay them.

"There was pressure to open up the spigot and to sell mortgages to everyone," he said.

"When we discovered, I discovered, that we were doing many, many, too many stop and frisks, we cut 95% of it out." — former New York Mayor Mike Bloomberg

The number of stop-and-frisk searches ballooned 600% while Bloomberg was mayor. They later declined 95%. We rated Bloomberg’s claim Half True.

Bloomberg’s campaign told PolitiFact his claim relied on data for the first quarter of 2012 and the last quarter of 2013. From January to March 2012, the New York Police Department recorded 203,500 stops, compared with approximately 12,500 stops from October to December 2013. That’s close to a 95% drop.

What happened in the years before that while Bloomberg was still mayor?

The New York Civil Liberties Union compiled data using NYPD’s annual reports and found that, in Bloomberg’s first 10 years in office, stop and frisk numbers increased significantly. In 2002, there were 97,296 stops recorded — that increased more than 600% by 2011, when there were nearly 686,000 stops. Stops fell dramatically in 2013 to just under 192,000. 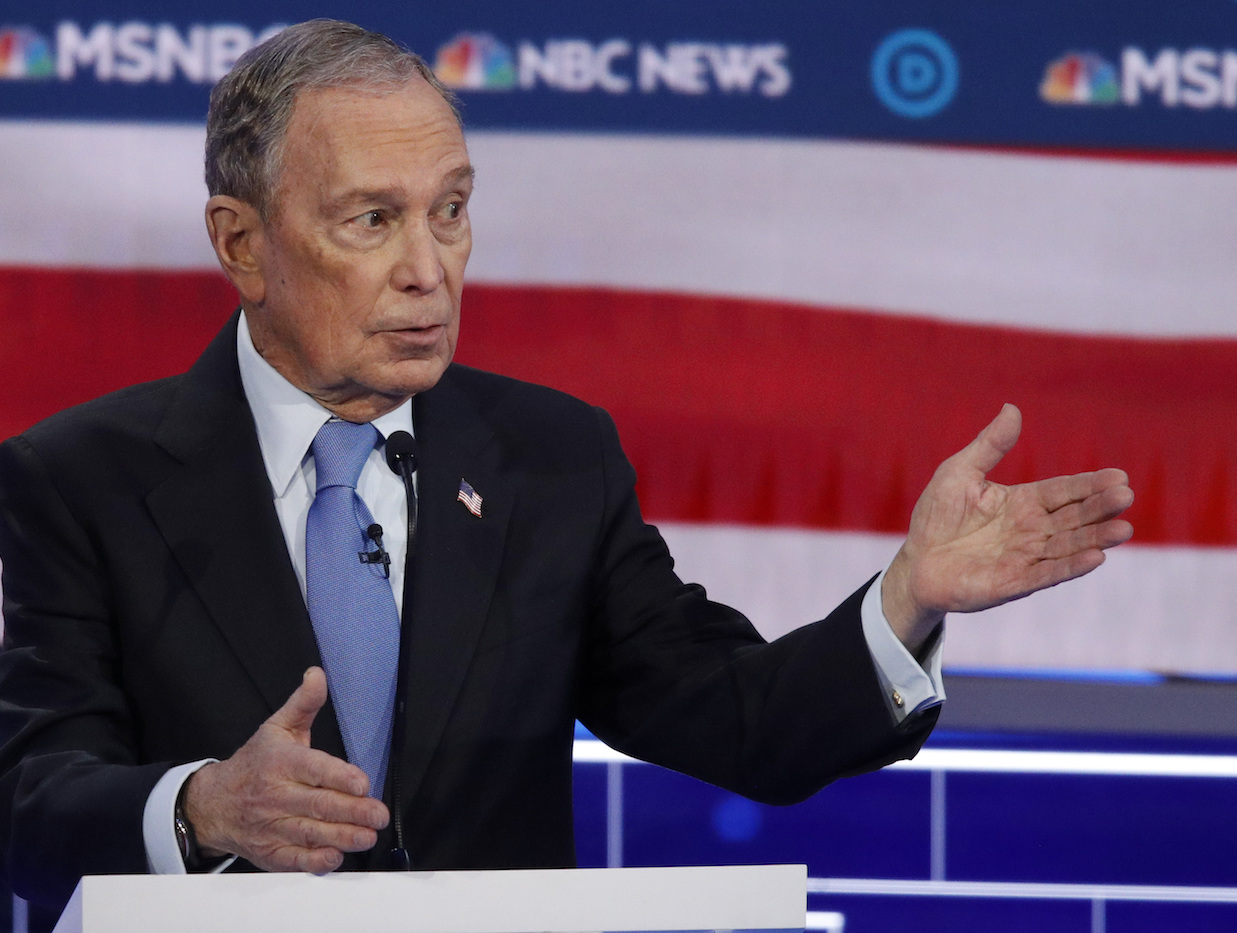 "You don't start out by saying, I have 160 million people, I'm going to take away the insurance plan that they love." — former New York Mayor Mike Bloomberg

It is true that Medicare for All, Sanders’ signature health proposal, would eliminate private health insurance, replacing it with a single public plan that covers everybody. That would include the roughly 160 million Americans who get employer-sponsored insurance

But Bloomberg’s argument that those people "love" their plans is complicated.

When we previously checked a similar claim that 160 million people "like their health insurance" we rated it Half True. Cursory polling suggests people with that coverage are mostly satisfied.

But most isn’t all. And once Americans try to use that coverage, many find it lacking. In a Kaiser Family Foundation/ Los Angeles Times poll, for instance, 40% of people with employer-sponsored insurance still reported having trouble paying for medical bills, premiums or out-of-pocket costs. In that same poll, about half said they skipped or delayed health care because, even with coverage, they couldn’t afford it. 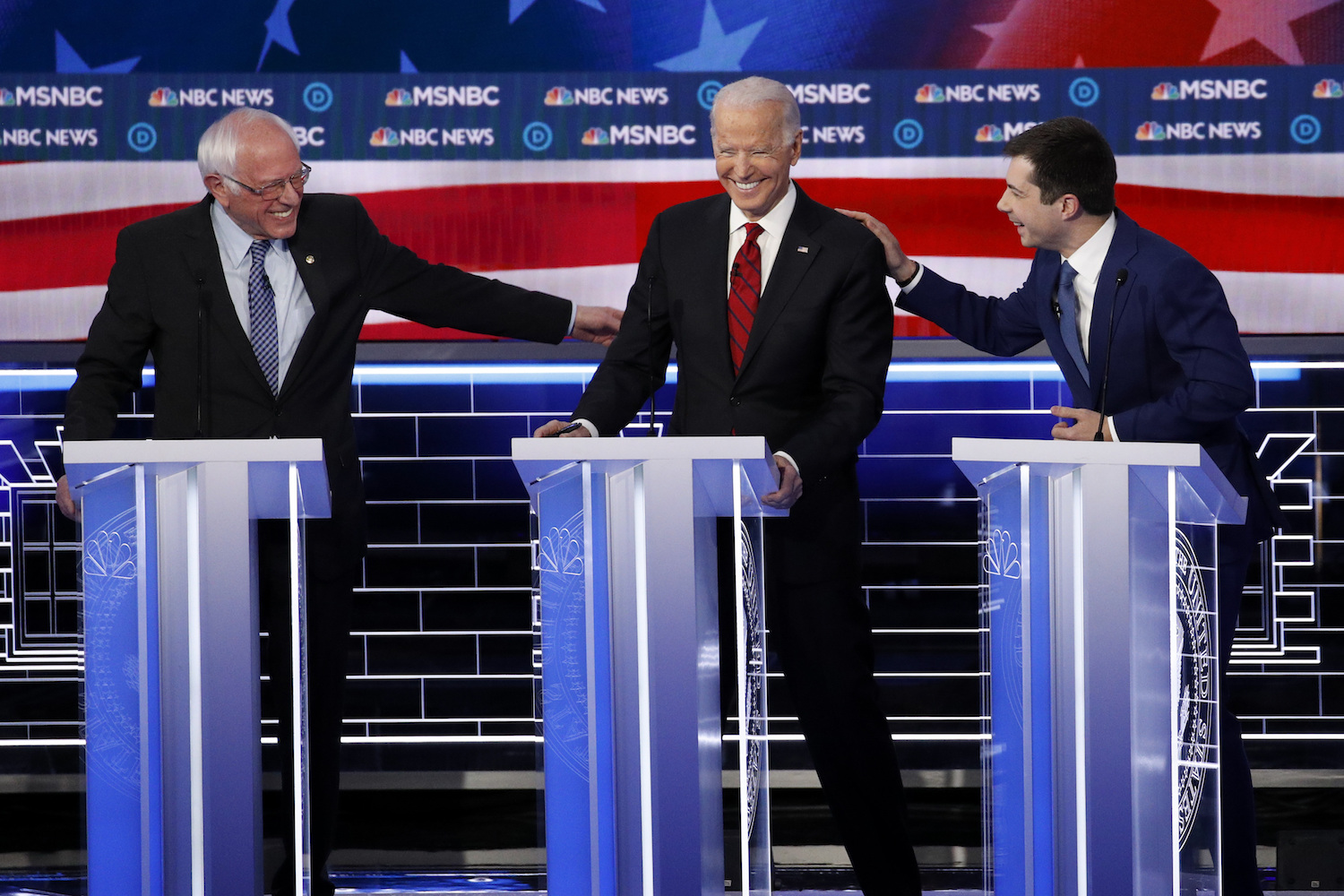 This is True. The number comes from adding the 2018 net revenues from 10 pharmaceutical companies and 10 health insurance companies. We redid the numbers and they added up. Experts said it was even likely that the figure was an underestimate.

This is highly misleading.

But that ignores most of Klobuchar’s health care plan, which she outlines in quite a bit of detail on four different web pages — a main health care policy page, a more detailed sub-page, a sub-page on prescription drugs and a sub-page on mental health. Klobuchar supports building on the Affordable Care Act and adding a public option that expands Medicare and Medicaid.

"Those CEOs are contributing to Pete's campaign and other campaigns up here." — Sen. Bernie Sanders, I-Vt.

When discussing the profits of the pharmaceutical industry, Sanders also charged that drug companies are donating to Buttigieg and other campaigns. We previously fact-checked Sanders’ claim that Buttigieg was a "favorite of the health care industry" and rated it Half True.

This is in part because Sanders has received the most donations of any Democratic candidate from the entire health care sector, which includes the pharmaceutical industry, health insurance industry, hospitals/nursing homes and health professionals. But, while checking this claim we also found that Buttigieg has received donations from employees and executives of pharmaceutical and health insurance companies such as AbbVie, Aetna, Anthem, Eli Lilly and Co., Merck & Co. and Pfizer.