Amy Klobuchar spent a lot of time describing how President Donald Trump has failed average Americans. She cast herself as a person who can work with Republicans and win over Trump voters, especially those who abandoned the Democrats in 2016.

On Trump, she said he broke his promise to bring down pharmaceutical prices and rebuild the country’s road, bridges and water pipes. She said that his lack of a clear foreign policy has met with laughter from European leaders, and he sacrificed trust in America when he abandoned Kurdish soldiers who fought and died to defeat the Islamic State.

She accused Trump of sabotaging the Affordable Care Act. And as she pivoted to health care, she invoked a key theme in her campaign — that unlike Bernie Sanders or Elizabeth Warren, you don’t need to swing for the bleachers to make life better for many families. The Affordable Care Act has done a lot of good, she said.

"We should be building on this, instead of blowing it up," Klobuchar said. "What that means for me is making premiums less expensive with a nonprofit public option."

Klobuchar peppered her speech with stories of Trump voters with buyer’s remorse. She told of a rancher in Minnesota who was angry about health care, voted for Trump, and then was dismayed when Trump gave a political speech in front of a crowd of Boy Scouts. She said a man in New Hampshire came up to her after an event and whispered that he had voted for Trump. But then, according to Klobuchar, he said, "I am not doing it again."

"We have to bring people with us, instead of shutting them out," she said.

Democrats can win in November, she continued "only if we put someone at the top of the ticket that gets that we need to have a big tent and wide coalition."

Biggest applause line: "We are going to build a big, blue, beautiful wall around the Midwest, and we are going to make Donald Trump pay for it."

Post-Trump vision: Klobuchar sees an America less divided by partisanship, more accepting of different opinions, and led by a president who is more dignified and respected.

Anything else: When an audience applauds after a good line, most politicians let it rise, and then start speaking a hair after it begins to fade. But Klobuchar starts speaking as the applause grows, and doesn’t let the excitement build. Also, she said Trump 20 times. 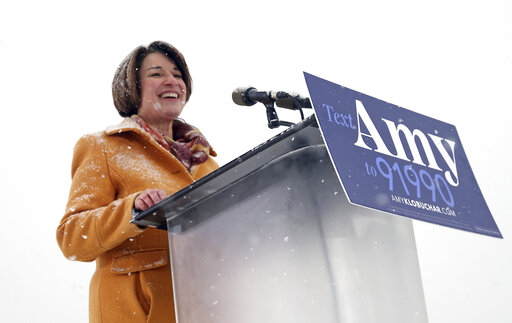 Democratic Sen. Amy Klobuchar addresses a snowy rally where she announced she is entering the race for president during a rally Feb. 10, 2019, at Boom Island Park in Minneapolis. (AP/Jim Mone)
Fact-checking Klobuchar’s statements

A biodiesel plant in Crawfordsville, Iowa, closed, "partly due to the trade war but mostly due to the waivers that Trump secretly gave to the oil companies."

This is largely correct, with a little embellishment. In September, the W2 fuel company announced it was closing. The primary reason, according to the CEO and members of Iowa’s congressional delegation, was a federal waiver program that said oil companies no longer needed to blend plant-based fuels such as ethanol and soybean biodiesel into conventional fuels.

Sen. Chuck Grassley, R-Iowa, told the Des Moines Register that "biofuels is on life support because of these waivers."

Oil companies applied for waivers through an official process, so Klobuchar is exaggerating by calling them secret.

"We are seeing in the nation a 50% increase in homeowners insurance."

This is exaggerated. Klobuchar was talking about the practical impact of climate change and severe weather events, from wildfires to tornadoes. She gives no time frame, so the statement by itself is vague. But there are two problems here. Insurance industry data shows that in constant dollars, between 2008 and 2017, the average cost of insuring a home rose 30%, not 50% as she said. (In nominal dollars, the increase was 45%, which is closer to her number.)

The other issue is that trends vary widely from state to state. Between 2008 and 2017, the average price fell by 1% in California, while in Oklahoma, it rose 60%. Many factors shape pricing, but a big one is the starting point. California has had high prices for a long time, and wildfires had little effect on the cost of homeowners insurance.

"A nonprofit public option. That is what Barack Obama wanted to do from the very beginning."

This is technically accurate, but it wasn’t Obama’s major priority. A public option was part of his health care plan, which said, "any American will have the opportunity to enroll in the new public plan or an approved private plan."

In 2009, as a public option became a sticking point in the debate over the Affordable Care Act, Obama said, "I didn’t campaign on a public option." And during his campaign, it wasn’t central.

He gave a major address in Iowa on May 29, 2007, outlining his health care plan in considerable detail. There's not one mention of the public option in his speech.

Trump got "$413 million from his dad in the course of his career."

This claim is shaky on the details. Trump’s finances remain a mystery to outsiders, and neither Trump’s lawyers nor investigative journalists have said irrefutably how much he is worth or how he made his money. The $413 million Klobuchar cited comes from a New York Times investigation that looked back decades and relied on thousands of documents and many interviews.

The Times concluded that "Trump received the equivalent today of at least $413 million from his father’s real estate empire, starting when he was a toddler and continuing to this day."

But notice that the article talks about how much the dollars would be worth today, not how much Trump got from his father at any one time. For his part, Trump has said his father loaned him $1 million, which he repaid with interest.

The reality is more complicated. The Times found that when Trump was just 3 years old, his father set up an account in his name and regularly added thousands of dollars to it. In today’s dollars, Trump was a millionaire by 8.

A National Journal financial journalist estimated that Trump’s wealth shot up $40 million when he took over his father’s real estate business in 1974. Ultimately, only Trump and his accountants know the full details.

"You have 64 public health mental health beds in the state of Iowa."

Correct. We checked this in June 2019. According to the Iowa Department of Human Services, there were 64 staffed psychiatric beds for adults younger than 55 at the mental health institutes in Iowa.

There are 44 psychiatric beds for adults younger than 65 and 15 for adults of any age at University of Iowa Health Care, a medical center which receives state funding. But those are not fully publicly operated.

"The Affordable Care Act is now 10 points more popular than the president of the United States."

Klobuchar rounds up a bit, but her core point is reasonably accurate. In the most recent Kaiser Health Tracking Poll, 52% of adults had a favorable opinion of the Affordable Care Act. At about the same time, Gallup found a slightly lower number of 50% who approve of the health care law.

As for Trump’s popularity, it can shift a couple of points from month to month. At the time of the health care polling, Gallup found that 43% of adults approved of the job he was doing. The Real Clear Politics polling average had about the same approval level at the same moment, 43.7%.

"(Trump) said he would bring pharmaceutical costs down. He hasn't done that."

Correct. When Trump said in May 2019 that "drug prices are coming down," we rated that Mostly False. The White House pointed to the Consumer Price Index for drugs, and using one particular time period, there was a small decline.

But that index leaves out the actual prices people pay, and it only covers retail drugs, about three-fourths of all prescriptions.

Beyond those limitations, the latest numbers show drug prices rising by about 3.9% in December 2019.

This is correct only for Canada. According to the U.S. Food and Drug Administration, section 804 of the Federal Food, Drug, and Cosmetic Act allows Washington to set rules for wholesalers and pharmacists to import prescription drugs from Canada.

Klobuchar spoke broadly of other countries, but she brought this up in the context of a bill she and Grassley cosponsored. That bill deals just with Canada.

"I have won Michele Bachmann’s district every single time."

Correct. Bachmann was an outspoken conservative Republican who represented Minnesota’s 6th congressional district from 2007 to 2015. Election results sifted by J. Miles Coleman at the University of Virginia Center for Politics show that Klobuchar carried the district in her three U.S. Senate campaigns. The last one, though, was a squeaker.

RELATED: Who is Amy Klobuchar? A bio of the Democratic presidential candidate

National Journal, The 1 Easy Way Donald Trump Could Have Been Even Richer: Doing Nothing, Sept. 2, 2015

PolitiFact, Fact-checking Donald Trump's claim that drug prices are going down, May 22, 2019

Bloggers
stated on November 6, 2020 a blog post:
Says Nancy Pelosi has “suspicious ties” to a voting software company that was involved in glitches that favored Joe Biden.

Tucker Carlson
stated on November 2, 2020 a Fox News broadcast:
“When large numbers of people in Butler (Pa.) started killing themselves with narcotics, no one in Washington or New York or Los Angeles said a word about it.”

Donald Trump
stated on October 30, 2020 a campaign rally in Waterford, Mich.:
“Our doctors get more money if somebody dies from COVID. … So what they do is they say, ‘I'm sorry, but, you know, everybody dies of COVID.’"

Donald Trump
stated on October 29, 2020 a rally in Tampa, Fla.:
“Nobody's ever seen a number like this… (33.1%) economic growth is four times greater than what the experts expected.”