Former Vice President Joe Biden portrays himself as the experienced adult at the grown-ups table in the Democratic primary. His opponents include "good folks," he says, but he’s the guy with major legislative accomplishments under his belt such as ushering Obamacare into law and, while in the Senate, passing the Violence Against Women Act.

Instead of attacking his primary opponents, Biden largely saves his swipes for President Donald Trump. Some are subtle, such as his frequent calls for civility in politics.

Other swipes are direct. Biden often recounts one of Trump’s statements following the 2017 violent protests at the Unite the Right rally in Charlottesville, Va., where a Neo-Nazi rammed his car into protesters, killing a woman.

"The president was asked to comment on what happened at that conflict, and he said there were very fine people on both sides," Biden said.

Days after the 2017 rally, Trump said "you had some very bad people in that group, but you also had people that were very fine people, on both sides."

Biden does not make many specific legislative promises if elected but generally vows to protect the Affordable Care Act, invest in research for diseases that include cancer and touts the importance of preschool. One of his only specific promises is to immediately rejoin the Paris climate accord, if elected.

He makes his family an important part of his stump speeches. Biden makes a veiled reference to the impeachment proceedings which stem from Trump’s efforts to ask Ukraine to investigate the Bidens including Hunter Biden’s work in Ukraine. Joe Biden doesn’t provide any details about Hunter’s work, but instead says the Republicans have unfairly attacked his family.

Biden makes health insurance personal by recounting his family’s experiences, including when his first wife and daughter were killed in a car crash and his sons were hospitalized. Biden’s eldest son, Beau, died of brain cancer in 2015.

"I promise you, I guarantee you, if I am your president I will protect your family’s right to have access to health insurance that is affordable and good as if it were my own family — I get it."

Anything else: He said the word "folks" 12 times. 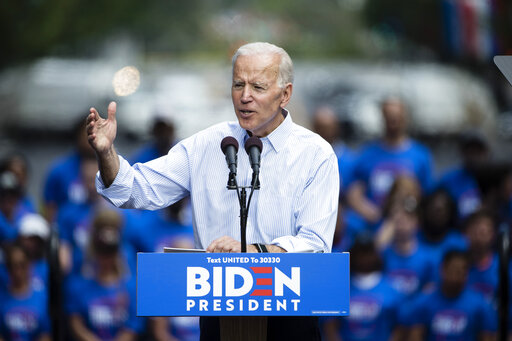 "We make up 15% of the problem in the United States of America."

This is accurate. The Emissions Database for Global Atmospheric Research shows that for 2018 the United States produced about 14% of the emissions, compared to about 30% for China, the highest country.

We rated a similar statement by Biden about the 1 to 1,400 statistic as Mostly True. The National Association of School Psychologists found in its 2015 membership survey a 1,381-to-1 ratio of students to psychologists. The association was unaware of any similar study with the 1,507 number.

This range aligns with two independent estimates which found that the program would add about $32 trillion to the federal budget over the next 10 years. By comparison, Sen. Elizabeth Warren says federal spending for Medicare for All would rise $20.5 trillion over that decade, which is based on a series of assumptions.

"A lot of people in America, about 160 million, like their health care plan they have negotiated with their employer."

We rated a similar statement by Biden Half True. We found in November that a cursory look at polling would suggest that most of the people he was talking about — Americans who get coverage through work — are happy with their plans. But once you dig a little deeper, that narrative gets more complicated. Even while Americans say they like their plans, large segments indicate that the private coverage they have still leaves meaningful gaps.

Medicare for All "is going to cause significant increases in taxes for middle class people -- Bernie acknowledges it."

This is a challenge to evaluate because the latest Medicare for All bill is silent about the taxes needed to pay for it. But Biden is distorting Sanders’ position in two ways: first, Sanders never said the rise in taxes would be significant (in 2016 his plan included a 2.2% additional tax on income). More importantly, Sanders always says middle class families will net out ahead because they won’t have to pay premiums. Sanders said that multiple studies show that under Medicare for All "average middle-class families will save $3,000 every year." However, the studies don’t back him up.

The $900 billion Recovery Act passed during the Obama administration was "without any waste or fraud or abuse."

Republicans criticized some of the projects as wasteful, but some of that is subjective. Biden delivered a report in 2010 that found low levels of waste, fraud or abuse. At the time, the number of open or consequential investigations by the Inspector General represented less than 0.2 percent of the number of total Recovery Act awards. While the act produced tangible results, it’s reasonable to question whether it did so in the most efficient way possible.

RELATED: Who is Joe Biden? A bio of the Democratic presidential candidate