MUSCATINE, Iowa -- Democratic presidential candidate Andrew Yang promoted his ideas for rebuilding the American economy in a Jan. 23 town hall here at Muscatine Community College, including his proposal to give Americans $1,000 a month in "universal basic income."

With less than two weeks to go before the Iowa caucus, Yang spoke to about 60 people in the college’s student center, with the 45-minute event split almost equally between a stump speech and a question-and-answer session.

Yang, a former tech executive, peppered his points about automation and job losses with quirky stories such as the one about a self-driving truck that transported 20 tons of butter from California to Pennsylvania. (News reports said there was a safety driver and safety engineer on the truck.)

"Why did they choose butter for this maiden voyage? I have no idea," he said with a chuckle. "At the end of route was a giant stack of pancakes. No, I am kidding about the pancakes. "

When asked about his concerns about national security, Yang mentioned worries that the United States is losing its advantage in drone technology to other countries. He said it’s hard to defend U.S. facilities against "what is essentially a flying vacuum cleaner."

In response to a question about veterans’ health, Yang proposed making it legal nationwide for veterans with a medical need to obtain marijuana or psilocybin mushrooms.

PolitiFact is traveling through Iowa this week fact-checking statements made by Democratic caucus candidates. We will be covering other candidates in the coming days.

Here, we’ll briefly tackle several remarks by Yang about manufacturing job losses, the decline in life expectancy, and the history of the concept of universal basic income. 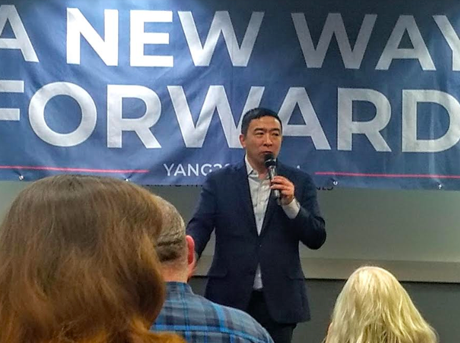 "Amazon is sucking up $20 billion in business every year, closing 30% of America’s stores and malls."

It’s clear that online retailers, including powerhouse Amazon, have eaten up some sales for stores and malls. But Yang’s specific assertion needs more context.

When we looked at Yang’s statement in July, we found that the consulting firm CoStar found retail stores shuttered a record number of square feet for one year by August 2018, even before the full 12-month period was complete.

Meanwhile, e-commerce sales as a percentage of all sales has been growing for years. And the number of malls is predicted to fall by 25% or 30% within the next few years, a metric that Yang’s campaign cited when we asked for evidence. 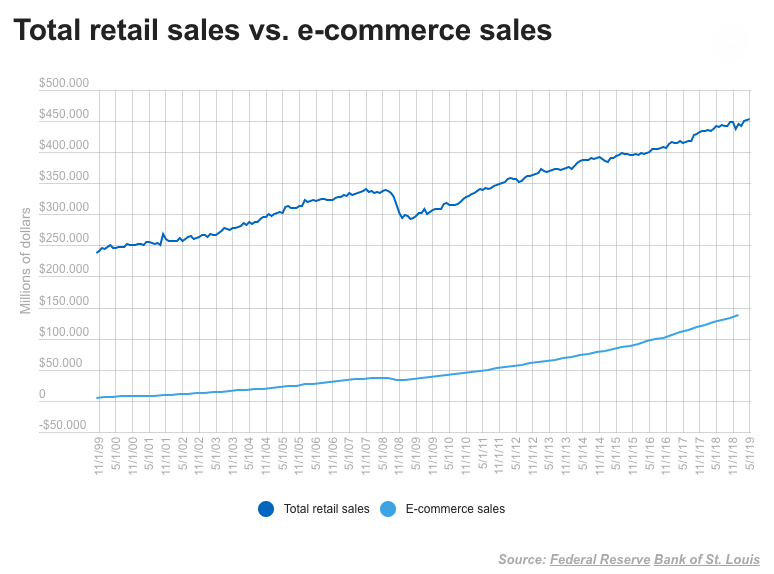 "American life expectancy has now declined for three years in a row," and the last time that happened was during the Spanish flu in 1918.

We rated a similar statement by Yang Mostly True based on the most recent figures from the federal Centers for Disease Control and Prevention.

In the three years since 2014 for which data are available, life expectancy dropped in 2015, stayed the same in 2016 and dropped in 2017. That pattern has not been seen in 100 years, since the flu pandemic a century ago, the CDC reported.

The CDC says suicides and drug overdoses are significant factors in the increase.

In raw dollars, this is essentially accurate. As a percentage of gross domestic income, it’s not.

As the following chart shows, this figure has risen astronomically since the end of the Great Recession.

That said, as shown in the chart below, adjusted corporate profits as a percentage of gross domestic income has hovered around the same level -- 4% to 8% -- for decades. Currently, it’s 6.6%.

This number is too high.

Official data from the Bureau of Labor Statistics shows that manufacturing employment in Iowa peaked in May 1999, at about 255,000. At its low point, during the Great Recession, the figure fell to about 197,000 -- a drop of 58,000, or larger than Yang said.

The idea of universal basic income is "not a new idea."

We have rated a similar statement by Yang Mostly True.

Thomas Paine, an 18th century political theorist, supported a one-time payment to all individuals when they reached 21 and a version of today’s Social Security program. Martin Luther King Jr. advocated for a guaranteed minimum income. The House passed something close to universal basic income once in 1970 and once in 1971, not twice in 1971.