Can Donald Trump really invoke the Insurrection Act to send troops into states?

President Donald Trump walks past police in Lafayette Park across from the White House on June 1, 2020. (AP)

• Generally speaking, the president cannot order the U.S. military to perform law-enforcement activities domestically. But there are exceptions.

• The primary exception is an 1807 law, the Insurrection Act, that allows states to request federal assistance and allows the president, in limited circumstances, to deploy military personnel in the U.S. without the consent of a state.

• The only major examples of the federal government invoking this authority without the consent of a state came during the 1950s and 1960s to enforce civil rights protections for black Americans.

• If Trump were to deploy the U.S. military over the objection of that state, it would be highly unusual, but the courts probably wouldn’t stop it from happening, legal experts said.

As federal troops and police were pushing peaceful protesters out of Lafayette Square across the street from The White House, President Donald Trump was threatening a similar show of federal force in states to quell demonstrations.

In a Rose Garden address June 1, Trump said he "strongly recommended" that every governor deploy the National Guard to "dominate the streets" and "establish an overwhelming law enforcement presence until the violence has been quelled."

"If a city or state refuses to take the actions that are necessary to defend the life and property of their residents, then I will deploy the United States military and quickly solve the problem for them," Trump said, referring to the looting and other violence that followed the death in police custody of George Floyd in Minneapolis.

Could Trump do this? It all depends on the interpretation of a previously obscure law, the Insurrection Act, signed by President Thomas Jefferson in 1807.

Here’s what you need to know about the law, and whether federally controlled troops can be deployed on U.S. soil.

Isn’t there a law that prevents the U.S. military from being used domestically?

In general, the U.S. military cannot be used on American soil. That’s been the case since the signing of the Posse Comitatus Act in 1878. The law’s current language bans the use of "any part of the Army or the Air Force as a posse comitatus or otherwise to execute the laws" except "under circumstances expressly authorized by the Constitution or Act of Congress." Regulations expand the law to cover the Navy and the Marine Corps.

As the law has been interpreted since, civilian law-enforcement officials cannot make "direct active use" of military personnel, including using federal military forces to subject citizens to "regulatory, prescriptive, or compulsory" authority, according to the Congressional Research Service.

So, generally speaking, the president can’t simply send the U.S. military to exert force within the United States.

The typical alternative during disasters or unrest is to deploy state National Guard units, which are under the command of governors. That’s what’s happening now in Minnesota. Gov. Tim Walz has called out the Minnesota National Guard to aid local law enforcement in controlling unrest in the Twin Cities. Walz is not the only one: Governors in 23 states have so far called up more than 17,000 National Guard members in response to the unrest, according to Politico. Some National Guard troops from Minnesota are due to be returned home within days. 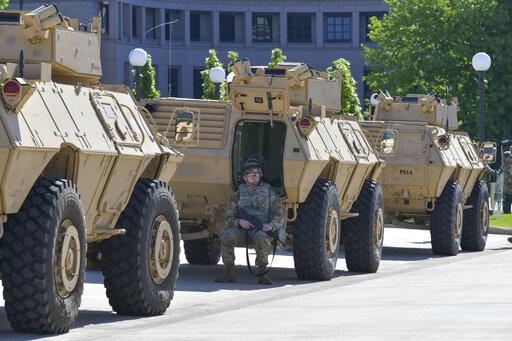 The Minnesota National Guard stands guard by the state capitol in St. Paul after George Floyd's death in police custody on May 31, 2020. (Damairs Carter/MediaPunch/IPX via AP)

But there are exceptions.

What are the exceptions to the Posse Comitatus Act?

The primary exception to the Posse Comitatus Act is the Insurrection Act. The 1807 law supplanted a prior law to account for the reality that the federal standing army had grown in size and prominence compared with state-based militias.

The law allows state governments to seek assistance from the federal government to put down insurrections. It also allows, in limited circumstances, the U.S. military to be deployed domestically without the consent of the state. Let’s take these scenarios in order.

With the consent of a state. A state, through its legislature or its governor, can ask for federal military assistance if officials believe the state National Guard cannot handle an "insurrection" on its own.

States have periodically made such requests. (After Trump’s speech, CNN’s Erin Burnett incorrectly said that Trump sought to mobilize "U.S. military troops on American soil for the first time since 1807;" she corrected that in a tweet.) 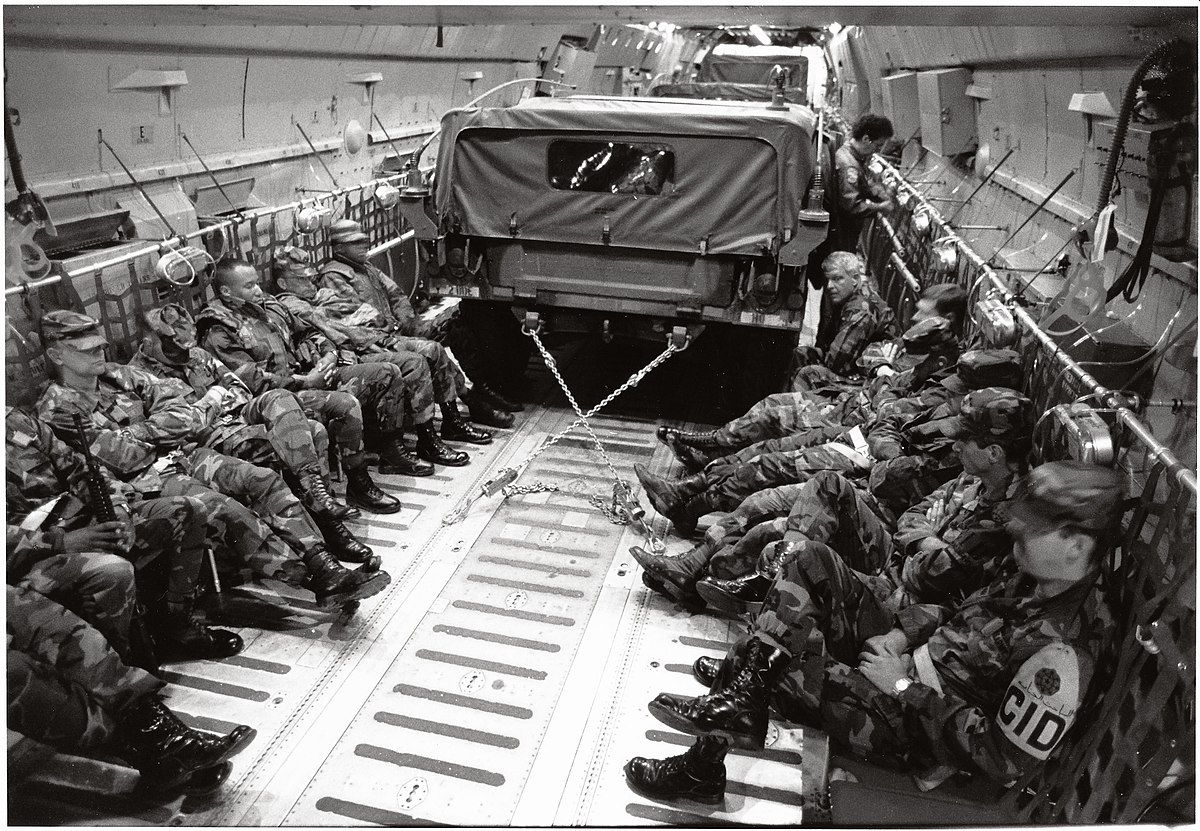 U.S. troops being transported from Fort Ord, Calif., to stop unrest in Los Angeles on May 1, 1992, following the acquittal of four police officers in the beating of Rodney King. (Robert Couse-Baker via Wikimedia Commons)

The most recent example came in May 1992, amid riots in Los Angeles after the acquittals of officers charged with the beating of Rodney King, a black motorist.

However, such decisions have not been made lightly, Nevitt wrote, even in the direst of emergencies. During the aftermath of Hurricane Katrina in 2005, for instance, Gov. Kathleen Blanco "requested that the Louisiana National Guard, under the control of Lt. Gen. Russell Honoré, remain under state authority," he wrote. 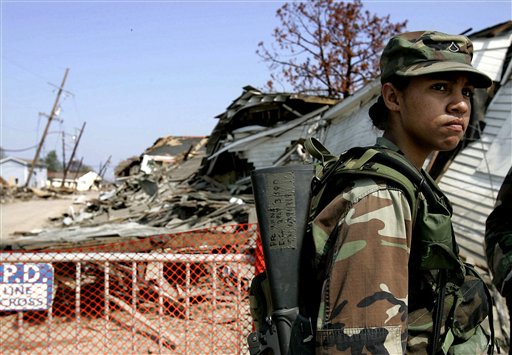 The unease with invoking the act has meant that it was not used after unrest in Ferguson, Mo., or Baltimore in recent years, Nevitt noted. And when Congress enacted an amendment after Katrina to make it easier for the federal government to impose troops on states, pressure from the states forced its repeal the following year.

In the current situation, there is no indication that Walz is eager to seek federal help, the Washington Post reported, focusing instead on using the state’s National Guard forces.

By contrast, Trump had a freer hand in the District of Columbia, since it is not a state and is not treated as one under this law.

Already in D.C., personnel from the FBI, the Drug Enforcement Administration, the U.S. Marshals, the Bureau of Prisons and the Bureau of Alcohol, Tobacco, Firearms and Explosives have been deployed, a Justice Department spokeswoman told the Post. And Trump has ordered troops from the 82nd Airborne Division based in Fort Bragg, N.C., to be moved to the D.C. area for possible deployment.

The president could conclude that a rebellion against the authority of the United States "makes it impracticable to enforce the law of the United States in any state or territory by judicial proceedings." Or the president could conclude that an insurrection "hinders the execution of law" in a way that "deprives citizens of constitutional rights" or "obstructs the execution of laws or impedes the course of justice."

These provisions have historically been invoked to protect the civil rights of black Americans in the 1950s and 1960s. For instance, Presidents Dwight Eisenhower and John Kennedy used these provisions in Arkansas, Alabama and Mississippi to enforce civil rights laws, and Kennedy invoked it to send federal troops to Birmingham, Ala., during civil rights protests, Nevitt wrote. 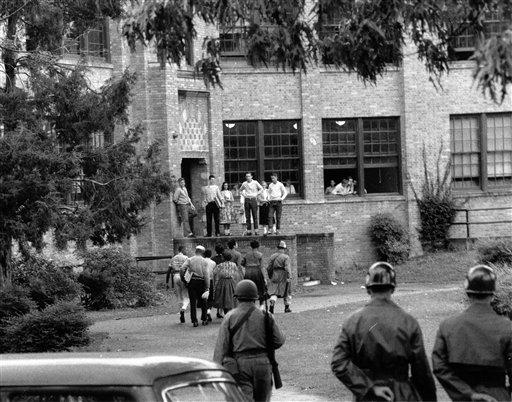 Legal experts say that Trump probably could invoke the law.

While experts said they doubt that the unrest today is so severe that it requires federal intervention, and while many of the protests consist of peaceful exercises of First Amendment rights, the courts have generally been reluctant second-guess issues that involve the separation of powers.

Experts agreed that invoking the act without the consent of a state would be highly unusual, and controversial. The constraints of public opinion have typically been sufficient to keep presidents from ordering U.S. troops where they have not been asked for, experts said. Whether those would hold for Trump, who has broken norms regularly during his presidency, is less clear.

If he wanted to invoke the act, Trump would have to issue a "proclamation to disperse" in writing, Scott R. Anderson, a visiting fellow at the Brookings Institution, told PolitiFact.

As of June 2, Trump does not appear to have done so.

Mark Nevitt, "The President, the Military and Minneapolis: What You Need to Know," June 1, 2020

Washington Post, "Trump threatens military action to quell protests, and the law would let him do it," June 1, 2020

Email interview with Robert F. Turner, co-founder of the Center for National Security Law at the University of Virginia, June 2, 2020