COVID-19 contact tracing for Donald Trump: Who else should isolate?

A mega contact tracing effort is underway after President Donald Trump announced that he and his wife Melania both tested positive for the coronavirus. Contact tracing will determine who was around them and who potentially is also infected with the virus.

The Sept. 29 debate with Democratic presidential nominee Joe Biden is the highest profile event Trump attended recently. Biden and his wife, Jill, tested negative for the coronavirus, their doctor said. Case Western Reserve University and Cleveland Clinic, which hosted the debate, said the candidates themselves were tested by their respective campaigns and tested negative. Debate moderator Chris Wallace told Fox News that the candidates didn’t arrive in time at the site to have a test by the Cleveland Clinic.

It can be hard to precisely determine when someone contracted the virus, especially when they interact with as many people as Trump has over the past week. Trump has mixed events on the campaign trail with White House events, including a Supreme Court nominee unveiling.

"The point of contact tracing is for people who are not famous, when John Doe is exposed at a local restaurant," said Harvard epidemiologist Michael Mina. "This is almost a famous enough event where contact tracing on the individual level isn’t needed."

Looking back at Trump’s events in the past few days reveal a long list of public officials and private citizens Trump could have come in contact with.

RELATED: Trump’s health and COVID-19: Here’s what we know

The process involves identifying and alerting people who may have come in contact with an infected person to prevent them from unknowingly spreading the virus. Anyone in an enclosed space with Trump or White House aide Hope Hicks while they were contagious and not wearing a mask are at risk.

Contact tracing should focus on people who were in close contact with Trump — within six feet for at least 15 minutes — whether they were indoors or outdoors, said Amanda Castel, a George Washington University epidemiologist.

The time between exposure and symptoms — referred to as the incubation period — is two to 14 days, but contact tracers will likely focus on the 48-hour period when Trump was most infectious.

People who have symptoms should get tested immediately. People without symptoms should wait three to five days from the date of exposure, the point at which most people will develop symptoms, to get tested, Castel said. But even people who test negative and show no symptoms should quarantine for 14 days, she said.

"Will people always do the right thing? Absolutely not," Mina said. "The goal is let people know you were potentially exposed to this virus and you should look into getting a test. Beyond that contact tracers don’t do much more."

Contact tracing is more effective when the case count is low and patients are contacted within 24 hours of a positive test and then quickly call their close contacts, Pia MacDonald at the RTI International research institute told PolitiFact.

This situation is complicated by Trump’s busy itinerary and expansive network.

From the debate, moderator Chris Wallace said he will be tested and believes the closest he got to Trump was 10 or 12 feet. Sen. Chris Coons, D-Del., a Biden supporter who attended the debate, tweeted that he tested negative.

County health department officials in Minnesota and New Jersey, where Trump held events on Sept. 30 and Oct. 1, confirmed that contact tracing is underway.

Attendees at Trump’s fundraisers tested negative for COVID-19 the day of the event, completed a wellness questionnaire and passed a temperature screening, the standard protocols for the fundraisers, said Republican National Committee spokeswoman Mandi Merritt. Every guest was at least six feet from the president at all times and the sites were sanitized before the event, she said

Health experts said Trump may have contracted the virus as early as Saturday, Sept. 26, at a White House event announcing Judge Amy Coney Barrett as his new Supreme Court nominee, because some people at that event later tested positive for the virus.

Here’s a look at Trump’s schedule five days before his diagnosis.

Saturday, Sept. 26: Trump’s schedule included a private meeting with evangelical faith leaders. Trump also met with Barrett and her family as he nominated her to the U.S. Supreme Court. Pictures of that day from the New York Times show the Trumps in the same room with U.S. Sen. Josh Hawley, R-Mo., U.S. Attorney General Bill Barr and others.

That evening, Trump held a campaign rally in Middletown, Pa. Hicks attended that event, along with other Trump aides Dan Scavino, William Russell and John McEntee. 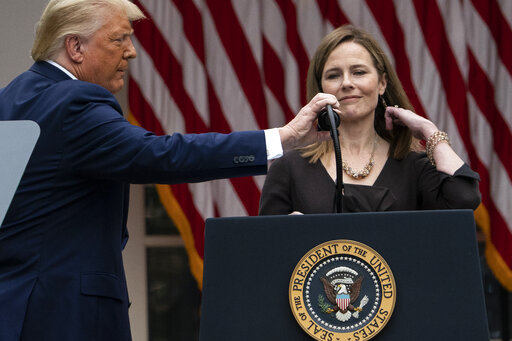 President Donald Trump adjusts the microphone after he announced Judge Amy Coney Barrett as his nominee to the Supreme Court, in the Rose Garden at the White House, Sept. 26, 2020, in Washington. (AP)

Sunday, Sept. 27: Trump spoke at a press conference at the White House. Former New York City Mayor Rudy Giuliani and former New Jersey Gov. Chris Christie attended the press conference, along with White House press secretary Kayleigh McEnany. Christie told ABC’s Good Morning America that no one was wearing masks in the room where the debate preparations happened, and that there were a total of five or six people in there. Christie said he was tested every day he went to the White House — Sept. 26 to Sept. 29 — and tested negative. 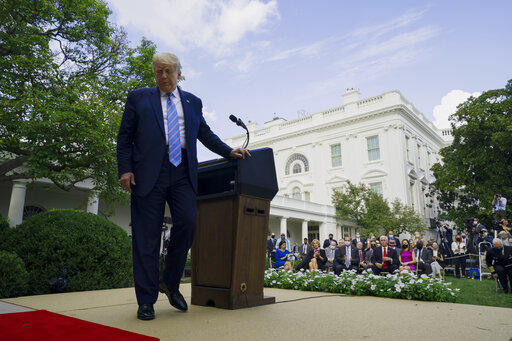 President Donald Trump leaves after an event about coronavirus testing strategy, in the Rose Garden of the White House, Sept. 28, 2020, in Washington. (AP)

Tuesday, Sept. 29: Debate night with Biden. In the audience were Trump’s and Biden’s family members and other guests. Wallace said that the Biden family side wore masks. Melania Trump came in wearing a mask but took it off when she sat down, Wallace said. Video shows that other Trump family members also walked in with masks on, but then took them off. 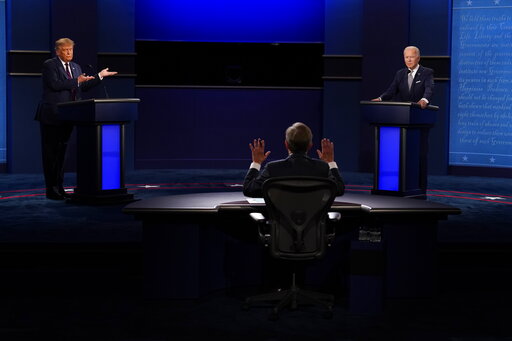 Wednesday, Sept. 30: Trump attended a private fundraiser in Shorewood, Minn., at the home of Marty Davis, CEO of Cambria, a company that designs and produces quartz surfaces. That night, Trump held an outdoor campaign rally in Duluth, Minn. Photos and video show him throwing hats to supporters. 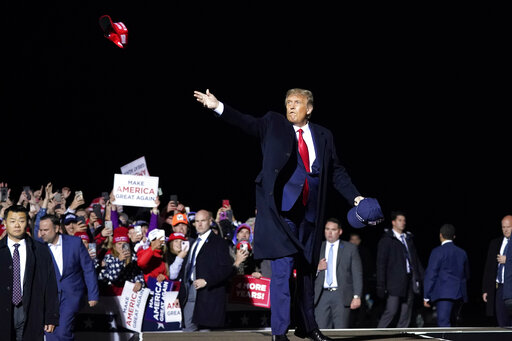 Thursday, Oct. 1: Trump’s schedule included a roundtable with supporters at his golf club in Bedminster, N.J.; the event was closed to the press.

FOX News, Chris Wallace: Primary concern is the health and safety of our president, Oct. 2, 2020

Facebook posts
stated on July 27, 2021 a Facebook post:
Florida Agriculture Commissioner Nikki Fried “suspended gun rights — no due process — just because she says these people were merely ‘involved’ in January 6.”

Donald Trump
stated on June 27, 2021 a statement:
“Facts have now come out to show conclusively” that the 2020 presidential election wasn’t legitimate.

National Republican Senatorial Committee
stated on June 22, 2021 an ad:
Sen. Raphael Warnock “voted for welfare for politicians plan. Up to $25 million of government money for Warnock’s own political campaign.”