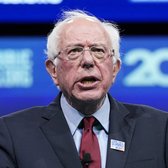 Bernie Sanders is a senator from Vermont. Sanders was first elected to the Senate in 2007 and was re-elected in 2012 and 2018. The senator also ran an unsuccessful presidential campaign in 2016, losing the Democratic primary to Hillary Clinton. From 1991 until 2007, he was the representative of Vermont’s At-Large District of the House of Representatives. Sanders was the mayor of Burlington from 1981 to 1989. He received a bachelor’s degree in political science from the University of Chicago. In 2019, he announced he was running for the Democratic nomination for president and dropped out in April 2020.