Fact-checking 'Judas and the Black Messiah,' the film about the killing of a Black Panther leader

Black Panther leader Fred Hampton, played by Daniel Kaluuya, leads a rally in Chicago in a scene from “Judas and the Black Messiah” from Warner Bros. Pictures. (Screenshot)

Editor's note: Have you ever wondered if the movie you just saw — that claimed to be based on a real story or historical events — was really accurate? So have we. With this year’s Oscars featuring historically based movies up for Best Picture honors, we wanted to help you sort out the facts from the dramatic liberties. (We're also fact-checking "The Trial of the Chicago 7" and "Mank.") Warning, major spoilers and plot points ahead!

The film Judas and the Black Messiah tells the story of the Chicago police killing a young Black leader in 1969. It’s set in a time when the FBI aimed to systematically dismantle and neutralize a range of civil rights groups. The FBI’s targets included Martin Luther King Jr.’s Southern Christian Leadership Conference, the Student Nonviolent Coordinating Committee and the more militant Black Panther Party.

The movie follows Bill O’Neal, a car thief recruited by the FBI to spy on the Illinois Black Panther Party and its charismatic, 21-year-old chairman, Fred Hampton. O’Neal more than succeeded, taking charge of the Panthers’ security operations. Ultimately, O’Neal provided information that helped the Chicago police plan a predawn raid on Hampton’s Chicago apartment. The raid on Dec. 4, 1969, left Hampton and Mark Clark, another member of the Panthers, dead.

The movie got five Academy Award nominations, including ones for Best Picture and Best Original Screenplay.

This is a movie, not a documentary, and the screenplay writers invent dialogue. But the film’s core points are an accurate reflection of the real events.

FBI memos show that the agency:

Lawsuits brought by the families of Hampton and Clark ultimately produced volumes of FBI materials. One of the lawyers for the families, Jeffrey Haas, relied on those documents for his book The Assassination of Fred Hampton. The FBI has its own archive. A key report came out of a 1976 Senate investigation.

Here's a look at how the movie's portrayals compare with what's in the historical record.

In the movie: J. Edgar Hoover pointed directly to the Black Panthers and Hampton as a potential national-security threat.

In reality: Hoover ordered a broad effort against Black nationalist hate groups, and the FBI’s Chicago office targeted the Panthers.

"The Black Panthers are the single greatest threat to national security," Hoover says. "More than the Chinese, even more than the Russians. Our counterintelligence program must prevent the rise of a black messiah from among their midst."

As Hoover speaks, the screen behind him shows scenes of Hampton speaking.

In a March 4, 1968, memo to 40 FBI bureaus around the country, the real Hoover laid out a "racial intelligence" effort focused on "Black nationalist hate groups" under a broader secret domestic counterintelligence program, known as COINTELPRO. One of the top goals was to "prevent the rise of a messiah who could unify and electrify the militant black nationalist movement."

This memo inspired the movie’s title. Hoover told each bureau to get started and identify people and groups that presented a potential danger and merited immediate action.

The FBI’s Chicago office focused on Hampton and the Illinois Chapter of the Black Panther Party. The FBI archives document a series of memos back and forth between the Chicago office and FBI headquarters, and Hoover was involved in some of the smallest details.

In the movie: Hampton is confronted by the leader of a Black gang called the Crowns.

In reality: The FBI sought to provoke a conflict between the Panthers and a gang called the Blackstone Rangers.

There’s a tense moment in the film when Hampton meets with the leader of a fictitious Chicago Black gang called the Crowns. The gang leader holds a leaflet, ostensibly from the Panthers, that casts the Crowns as secretly working with the federal government.

That scene isn’t accurate. But it does draw from an actual FBI letter that sought to provoke a real gang, the Blackstone Rangers, to attack the Panthers. The letter was crafted by the FBI to appear to be from an anonymous "Black brother" suggesting the Panthers planned an assassination on a Rangers leader.

And if you were wondering, because there was no meeting between the Crowns and the Panthers, O’Neal was never nearly outed as a car thief. That dramatic scene was invented.

In the movie: O’Neal draws a floor plan of Hampton’s apartment for the FBI.

In reality: The FBI said police relied on a sketch from O’Neal to plan the raid that killed Hampton.

A scene in the film shows O’Neal meeting his FBI handler Roy Mitchell at a restaurant. Mitchell hands him a notebook and tells him to draw a floor plan of Hampton’s apartment. O’Neal is reluctant, but complies.

O’Neal acknowledged that he sketched a plan. Mitchell shared that information with the Chicago police and his boss at the FBI. In a predawn raid on the apartment Dec. 4, 1969, the police killed Hampton and Clark. 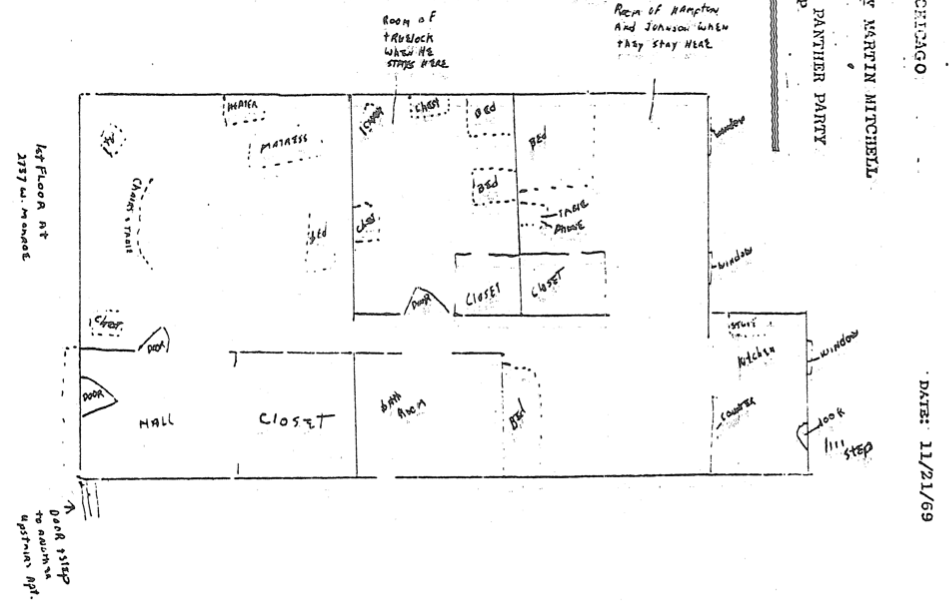 On Dec. 3, 1969, the day before the raid, the Chicago FBI office alerted Washington that something was about to happen.

"The memorandum stated that local police planned ‘a positive course of action’ based on the information regarding the West Monroe Street apartment which the Chicago FBI had provided local law enforcement officials," according to a 1979 federal appeals court ruling. (The legal battles involving the raid continued for more than a decade after it took place. In 1982, the City of Chicago, Cook County and the federal government paid a settlement of $1.85 million to the mothers of Hampton and Clark.)

Four days after the raid, Mitchell told his supervisor that it was solely thanks to O’Neal that police had that information.

"This information is of considerable value in consideration of a special payment for informant," Mitchell wrote.

In real life, O’Neal did become chief of security for the Black Panthers. But the movie invents a twist where he becomes Hampton’s driver. That didn’t happen, although he occasionally drove Hampton from place to place, and he served as a bodyguard.

The movie largely tracks with most of the credible evidence from the raid. Chicago police accounts don’t match the analysis from an FBI expert. While Chicago police testified that they announced themselves and were met with a volley of gunfire, an FBI ballistics expert reported that out of about 90 rounds fired, only a single one came from a Black Panther weapon. Police said gunfire came from the room where Hampton was killed. The FBI expert found no evidence to back that up.

Ballistic studies found two shots at close range killed Hampton. The words of an officer saying "He’s good and dead now," were taken from the account of Hampton’s fiancee, Deborah Johnson, who was with him in his bedroom when the raid took place.

In the movie: The FBI gives O’Neal a drug to slip into Hampton’s drink.

In reality: Some uncertainty remains whether Hampton was drugged at the time of the raid.

The film shows someone tied to the FBI giving O’Neal a white powder to slip into Hampton’s drink before the raid. We see O’Neal at Hampton’s apartment that evening, and he offers to get him a drink. We are left to assume that he drugged Hampton.

O’Neal was at the apartment that evening. Years later, O’Neal said he did not drug Hampton. Blood test evidence is mixed. People with Hampton that night said he barely lifted his head during the gunfire.

In the movie: Hampton and other Panthers speak to a meeting of whites about their shared struggles.

In the movie, Hampton and his fellow Panthers walk into a meeting of whites where a Confederate flag hangs as the backdrop to a speaker’s podium. Hampton greets the white man leading the group as "The Preacherman."

In the scenes that follow, Hampton talks about their shared struggles with poor schooling and harsh treatment by police. His voice continues as the scene shifts to a Puerto Rican funeral.

The details of how the groups came together was less dramatic, but Hampton connected with the Young Patriots Organization, a leftist group formed to organize poor whites on Chicago’s North Side. The group lasted only a few years, but that partnership was part of Hampton’s Rainbow Coalition of whites, Blacks and Puerto Ricans. 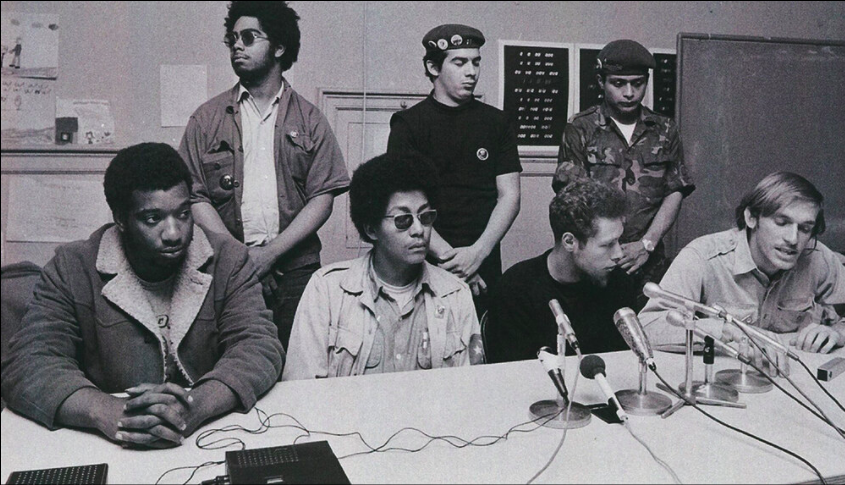 In the movie: Police torch the Black Panthers’ offices after a gun battle.

In the movie: The death of an injured Black Panther in a hospital is portrayed in a way that appears to implicate the Chicago police.

In reality: The timing and cause of the man’s death do not point to police interference.

The character in the movie is based on Larry Roberson, who was shot in the stomach during a gunfight that wounded two officers. This happened in July 1969.

According to a 1971 New Yorker article, Roberson underwent surgery at the Cermak Memorial Hospital. From there, he was sent to Cook County Hospital, where he contracted jaundice and died seven weeks later.

Smithsonian Magazine, The history of Judas and the Black Messiah, Feb. 11, 2021

The Guardian, Fred Hampton was a radical revolutionary. Judas and the Black Messiah ignores that, Feb. 25, 2021

Decider.com, ‘Judas and the Black Messiah’ True Story: How Accurate Is the Fred Hampton Movie?, Feb. 12, 2021