• In recent weeks, Democrats have repeatedly warned that Republican-backed election bills like the one enacted in Georgia amount to a resurgence of Jim Crow.

• Some historians say Biden’s rhetorical point was justified as a way of highlighting the dangers of backsliding from hard-won voting rights.

• Others, however, say the comparison is overblown, since even the recent tightening of Georgia’s voting laws leaves Black residents with far more access to the ballot box than they had during the grimmest days of Jim Crow before the mid 1960s.

In recent weeks, Democrats have repeatedly warned that Republican-backed election bills like the one enacted in Georgia amount to a resurgence of Jim Crow, the legal structures in the pre-1960s South that kept Blacks segregated and politically powerless.

The system included both segregationist laws and social norms that relegated Blacks to second-class status. Significant elements of the system were laws that, while nominally written to be racially neutral, had the widespread effect of disenfranchising Blacks from voting. The methods included poll taxes, complicated literacy tests and "grandfather clauses." Many of the laws effectively exempted whites from such requirements even as they blocked Blacks from voting. 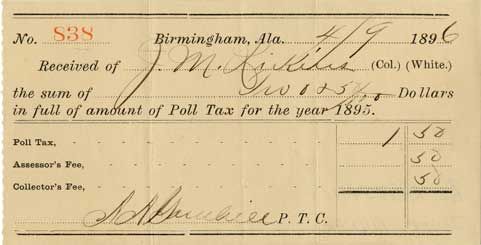 Democrats are arguing that laws passed in 2021 are at the very least in the same spirit.

"This is Jim Crow in the 21st century," President Joe Biden said in a March 26 statement.

"This is Jim Crow on steroids, what they're doing in Georgia and 40 other states," he added in a March 31 interview with ESPN.

Other leading Democrats have made the comparison, too.

Stacey Abrams, the voting rights activist in Georgia who founded the group Fair Fight Action, said in March that the Georgia law is "a redux of Jim Crow in a suit and tie."

The Democratic-chaired Senate Judiciary Committee headlined an April hearing "Jim Crow 2021: The Latest Assault on the Right to Vote."

Critics, including some Republicans, have pushed back on the label, arguing that Georgia’s new election law doesn’t resemble the Jim Crow policies of decades ago that kept African Americans away from the ballot box.

Biden "absurdly claims this is worse than Jim Crow," said Sen. Tim Scott, R-S.C., in his response to Biden’s address to Congress.

Substantively, we found that the Georgia election law is a mixed bag when it comes to restricting ballot access. It offers an extra Saturday of early voting and maintains the optional Sunday early voting used by large counties, but it adds restrictions to absentee voting and ballot drop boxes.

"Vote by mail was disproportionately used by Black voters over white voters, and it is now being made more difficult," said Seth Bringman, a spokesperson for Fair Fight Action.

We asked a range of historians and political scientists about whether Democratic invocations of Jim Crow stand up to historical scrutiny.

Some said Biden’s rhetorical point was justified as a way of highlighting the dangers of backsliding from hard-won voting rights. Those who say the comparison is justified acknowledge that the Georgia law does not literally resemble Jim Crow in its particulars. But they argue that elements of the law would effectively suppress the vote, with a law passed just weeks after Black voters helped Democrats win two close Senate elections.

The recent election legislation ignores the lack of any widespread fraud during the 2020 election, the White House said. "For politicians who didn’t like the outcome, they’re not changing their policies to win more votes, they’re changing the rules to exclude more voters," said White House Press Secretary Jen Psaki.

Other experts, however, said the comparison is overblown, since even the recent revisions to Georgia’s voting laws leave Black residents with far more access to the ballot box than they ever had during the grimmest days of Jim Crow.

The case for comparing the Georgia law to Jim Crow

Andra Gillespie, an Emory University political scientist and expert on African American politics, said "it’s convenient" for Republicans to say they’re not enacting literacy tests or requiring prospective voters to count soap bubbles before they cast a ballot. But she said that’s a low bar.

Several of the recent legislative changes in Georgia appear to disproportionately hurt Black voters, she said. It requires prospective absentee voters to provide their driver’s license number or other documents, like a bank statement or utility bill; about 200,000 Georgians lack a driver’s license, and they may not have access to the other documents. In addition, the law bans mobile voting units to reduce long lines on Election Day; heavily Black Fulton County used such vehicles in 2020. And the law also limited the hours for absentee ballot drop boxes, which could reduce their usefulness for workers who hold multiple jobs.

Given these changes, Gillespie said, "it’s hard to make the claim you don’t intend to make it harder for people of color to vote."

Stephanie McCurry, a Columbia University historian who has written about the post-Civil War South, said that the "most powerful echo" between the Jim Crow era and today are "accusations of fraud as motivation for new restrictive laws that impact minority voters."

While a lot of Americans believe that Black voters were disenfranchised by violence alone, she said, "this was never the case. Murder was always paired with fraud and manipulation of election administration, laws, rules, at the state and local level."

Lopez D. Matthews, a librarian at Howard University who specializes in Black history, said he, too, hears echoes of the past in Republican calls to secure the "integrity" of the vote.

"Attempts to restrict voting and activities that support the ability of people to vote do harken back to the days of Jim Crow," Matthews said. "In those days, the participation of Black people was considered corrupting the political process and restrictions were put in place to ‘protect’ the integrity of elections." 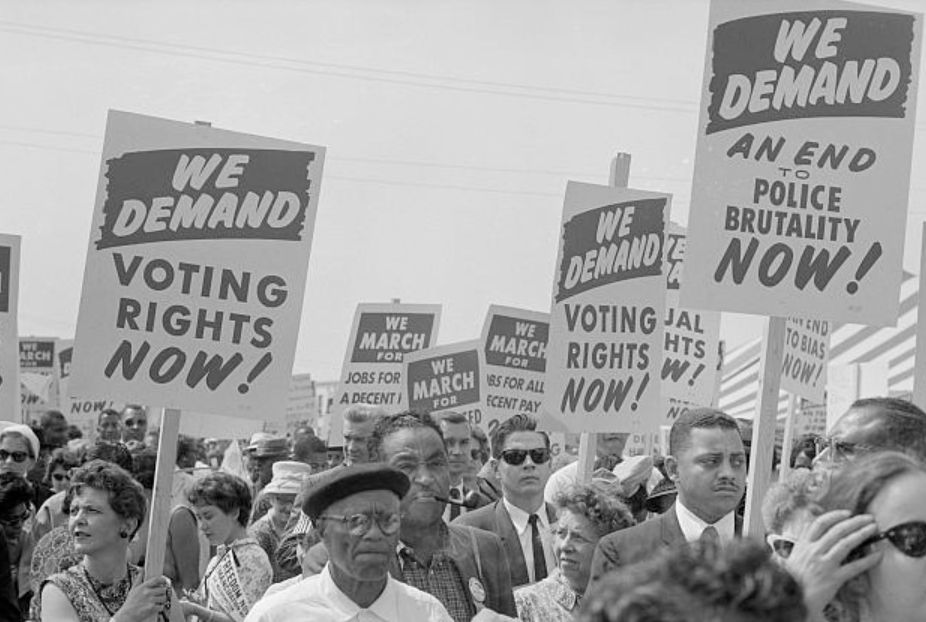 Marchers with signs at the March on Washington, 1963. (Library of Congress)

The case that the comparison is exaggerated

Not every expert agrees with this line of argument.

"Comparisons to Jim Crow are easy to make and have some merit, but they are largely more provocative than historically accurate," said Steven Reich, a James Madison University historian and author of "The World of Jim Crow America: A Daily Life Encyclopedia."

Reich said he does see some parallels with the Jim Crow era in the new laws, such as their nominally race-neutral language and their adoption by an electorally threatened governing class.

However, to Reich, there’s a difference between the scope of disenfranchisement under Jim Crow and the restrictions now being enacted. Black voter turnout, which approached 90% during Reconstruction — the period from 1865 to 1877 when the federal government enforced civil rights laws in the South — dropped dramatically after Reconstruction ended, with registration sometimes dropping to 3% of eligible adult Blacks, with correspondingly minuscule turnout. Black turnout today in Georgia is much higher than that.

"When Biden, or anybody else, compares the new voting laws to Jim Crow, they are resorting to hyperbole to call attention to what are blatant, partisan attempts to restrict voting," Reich said.

"While I have some issues with restrictive voting laws despite my personal center-right perspective, comparing the requirement that voters show a $5 plastic ID at the polls and bring their own water to historical oppression or race war seems simply bizarre," Reilly said.

Walter Olson, a senior fellow with the libertarian Cato Institute, said that much of the current legislation amounts to fine tuning things like the number of days of early voting or the precise rules of mail balloting — options that, even if they are reduced, weren’t available at all during the Jim Crow era.

It’s important to keep an eye on what actually passes, not the most extreme versions of bills that are proposed and later watered down. For instance, Georgia Republicans initially proposed getting rid of Sunday early voting — which would have decimated longstanding "souls to the polls" efforts by Black churches — but the final version retained it as an option.

"If the terrain over which people are bickering is solidly within the range of election law considered normal a half dozen years ago, it’s probably not a return of Jim Crow, nor is it likely to spell the end of American democracy," Olson wrote.

White House, "Statement by President Biden on the Attack on the Right to Vote in Georgia," March 26, 2021

MTV.com, "Think you can pass the impossible literacy test African Americans once had to take before they could vote? Try now," Nov. 19, 2014