• Scientists have found little evidence that the kind of masks worn by students negatively affect oxygen or carbon dioxide levels, and they say that contamination levels on masks are no worse than on other common objects.

• It’s possible that masks could spur social isolation and impede communication, especially for the deaf and hard of hearing.

Florida Gov. Ron DeSantis is one of a handful of GOP governors trying to block school districts from requiring masks in the classroom.

Under DeSantis’ direction, the state health department adopted a rule that gives families the ability to opt out of locally ordered school mask mandates. The state board of education approved another rule that allows parents to secure vouchers for their children to attend a different school if they encounter pushback on their refusal to use masks. The DeSantis administration threatened to penalize school officials financially if they bucked the rules.

Much of DeSantis’ argument was based on his belief that parents have a right to determine what’s best for their child, as well as his doubts about whether mask mandates are effective at curbing the virus in a school setting. (When we looked into the latter argument, multiple experts pointed to research showing that mask-wearing is effective in protecting children from COVID-19 and preventing COVID transmission in schools.)

In an executive order, DeSantis wrote that "masking children may lead to negative health and societal ramifications" and that "forcing children to wear masks could inhibit breathing, lead to the collection of dangerous impurities including bacteria parasites, fungi, and other contaminants, and adversely affect communications in the classroom and student performance."

She cited concerns raised in an op-ed by Marty Makary, a professor at the Johns Hopkins School of Medicine, and Cody Meissner, the chief of pediatric infectious diseases at Tufts Children’s Hospital, that said "masks can lead to increased levels of carbon dioxide in the blood" and that they "can be vectors for pathogens if they become moist or are used for too long." Makary and Meissner also warned of impacts on verbal and nonverbal communication.

Other people aligned with DeSantis’ view have put the harm of kids wearing masks in even starker terms.

During a panel discussion convened by DeSantis, clinical psychiatrist Mark McDonald said, "My position is simple: Masking children is child abuse," according to the Miami Herald. (Meissner was also on the panel.)

Rep. Madison Cawthorn, R-N.C., spoke out against a proposed school mask mandate by the Buncombe County Schools Board of Education, saying a mandate is "nothing short of psychological child abuse."

And on the July 27 edition of his Fox News show, Tucker Carlson asserted that it’s a "scientifically established fact that masks pose a far greater threat to children than COVID does. So, strictly speaking as a scientific matter, this is lunacy."

What does science say about whether masks can cause harm for the wearer?

Generally, we found that concerns about significant negative impacts on breathing aren’t well supported. Worries about masks interfering with communication and serving as a barrier to social connection in the classroom may be more reasonable, experts say. 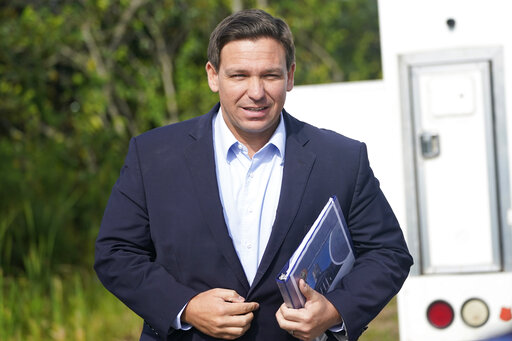 The first thing to note is that masks aren’t recommended for everyone. The American Lung Association, for instance, cautions people with preexisting lung disease to consult their doctor before wearing a mask regularly. In addition, the CDC does not recommend that children under 2 years old wear masks. Masks are also generally not recommended during heavy exercise.

But what about people who do not fall into these categories? Could they be hurt by wearing a mask?

Some of the most common concerns raised involve a lack of oxygen, or a buildup in carbon dioxide. We have previously found such concerns to be oversold, as have other fact-checkers.

The issue "has been convincingly debunked," said Babak Javid, a professor of medicine at the University of California-San Francisco.

We should note that studies specific to children have been rare, so most of the scientific literature has involved research on adults. Two studies on children used N95 masks, which are more sophisticated than the masks most school children will use, but even these found no significant impacts on breathing. Other peer-reviewed studies of adults have produced similar results.

A mask "will add some resistance to the breathing process, meaning it may feel like it takes a bit more work to take a breath, but it won't materially change the makeup of air that comes through the mask," said Benjamin Neuman, a biology professor at Texas A&M University and chief viologist of the university’s Global Health Research Complex.

One paper published in February 2021 looked at 10 previous studies of adults or children that addressed questions of breathing while wearing a mask. The authors expressed disappointment at how few studies looked specifically at the impacts on children, and they urged that more research is needed on that specific question.

However, the paper found little reason for worry.

"The eight adult studies, including four prompted by the pandemic and one on surgeons, reported that face masks commonly used during the pandemic did not impair gas exchange during rest or mild exercise," the authors wrote.

A June 2021 study that seemed to indicate breathing challenges for masked children was retracted by the journal JAMA Pediatrics 16 days after its publication, due to methodological shortcomings and other concerns.

David G. Hill, a physician and American Lung Association board member, has written that masks "absolutely" do not cause low oxygen levels.

"We wear masks all day long in the hospital," Hill wrote. "The masks are designed to be breathed through and there is no evidence that low oxygen levels occur."

Another reason medical experts aren’t too worried is that "the world has engaged in a massive study — observational, but literally billions of people — on mass mask wearing, and people are not dropping dead left, right and center," Javid said.

A few other complaints about masks sometimes surface, such as fear that they could concentrate toxins or harm the immune system. But these aren’t well supported either, experts say.

As long as masks are regularly replaced or laundered, "there’s no reason to worry about ‘toxins,’’ said Columbia University virologist Angela Rasmussen. And there’s "no evidence that masks have any effect on the immune system or immune function," she said.

Amesh Adalja, a senior scholar at the Johns Hopkins Center for Health Security, told PolitiFact that swabbing a student’s backpack would probably generate as many or more pathogens as swabbing their mask.

And Nicole Gatto, an associate professor of public health at Claremont Graduate University, said that pathogens on masks may be evidence that they’re being kept "out of the mouths and noses of those who wore them, preventing people from potentially getting ill."

While the scientific evidence for specific ills such as low oxygen or high carbon dioxide is weak, experts say it’s more plausible that the annoyances of masking could distract from in-class lessons and make it harder to hear other students or the teacher.

In a September 2020 paper in the International Journal of Environmental Research and Public Health, the authors wrote that "while there are minimal physiological impacts on wearing a mask ... there may be consequential psychological impacts of mask wearing on the basic psychological needs of competence, autonomy, and relatedness."

Such downsides may be especially acute for students who are English language learners, or those who are deaf or hard of hearing.

"Masks interfere with lip-reading, which has a major impact on communication," Javid said.

The reality is that "there is minimal evidence" on how severe these sorts of impacts could be for most children. "This is the first time in most of our lifetimes we have faced the prospect of continued isolation and masking, so it is not surprising we have insufficient evidence to guide us," said Amy Price, a senior research scientist at Stanford University.

Still, there is evidence that children are adaptable. In a December 2020 study of children’s ability to read facial expressions of masked people, researchers at the University of Wisconsin-Madison found that "while there may be some challenges for children incurred by others wearing masks, in combination with other contextual cues, masks are unlikely to dramatically impair children’s social interactions in their everyday lives."

And child-development experts caution against assuming that any deficits from masks will linger over the long term.

Most children "don't like wearing pants or shoes at first, but they adjust, like they do for all the other things we require of them," said A. E. Learmonth, professor with the cognition, memory and development lab at William Paterson University. "In many ways, a mask is just another article of clothing. In the beginning it could be distracting and uncomfortable, but like shoes, they will get used to it."

Meanwhile, polling suggests that parents are open to masks in schools. A Kaiser Family Foundation survey taken in July and August found that 63% of parents wanted masks required in schools for people who are unvaccinated.

Gabrielle Settles and Jason Asenso contributed to this article.

Centers for Disease Control and Prevention, "People with Certain Medical Conditions," updated May 13, 2021

American Lung Association, "From the Frontlines: The Truth About Masks and COVID-19," June 18, 2020

McGill Office for Science and Society, "What We Know About Kids and Masks," July 23, 2021

USA Today, "Fact check: Wearing a face mask will not cause hypoxia, hypoxemia or hypercapnia," May 30, 2020

PolitiFact, "DeSantis’ executive order misleads about the lack of scientific support for masking in schools," Aug. 10, 2021

PolitiFact, "Masks for COVID-19 are effective, as a six-part Facebook takedown fails," June 12, 2020

PolitiFact, "Masks do not kill people and do not reduce blood oxygen levels," Dec. 3, 2020

Email interview with Babak Javid, a professor of medicine at the University of California-San Francisco, Aug. 9, 2021

Email interview with David N. Cornfield, a professor of pulmonary medicine at the Stanford University School of Medicine, Aug. 9, 2021

Email interview with A. E. Learmonth, professor with the cognition, memory and development lab at William Paterson University, Aug. 11, 2021

Email interview with Ashley L. Ruba, postdoctoral research rellow in the department of psychology at the University of Wisconsin-Madison, Aug. 12, 2021