How did West Virginia inject 108.1% of its vaccine doses?

• West Virginia can say it has injected 108.1% of vaccines received because vials of the Pfizer vaccine include an “extra” dose, and the state has consistently been able to inject those additional doses.

• West Virginia is far from the only state to leverage “extra” doses, but West Virginia also has been doing better overall in vaccinating its residents than almost any other state, possibly due to its reliance on small, independent pharmacies to reach its scattered population.

• While the 108.1% figure is accurate if you use five doses per vial as the denominator, it’s worth noting that the federal contract with Pfizer now gives the company credit for delivering six doses in a vial.

West Virginia Gov. Jim Justice took a victory lap on national cable networks on Feb. 1, explaining how West Virginia succeeded in vaccinating a greater share of its residents than any other state.

In appearances on both CNN and MSNBC, Justice said that his state had actually injected more than 100% of the vaccine doses it had received.

"We're now at 108.1% of the vaccines received that we've put in arms, meaning that we've got more vaccines out of the vials and absolutely not throwing a single one away," Justice said on CNN.

When Justice repeated this talking point in a subsequent interview with MSNBC anchor Craig Melvin, the anchor did a double take, saying he didn’t understand the math.

"We’re getting more shots out of the vials than we were told were in the vials," Justice explained. 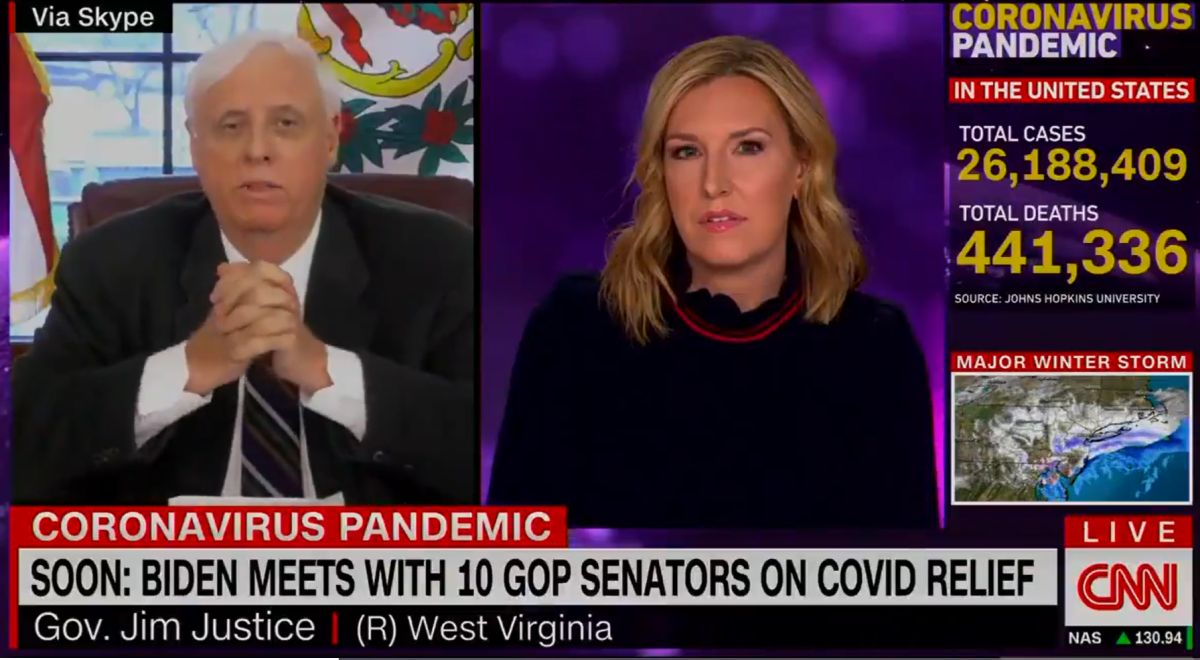 What’s going on? We can explain.

Justice was referring to the discovery in December that the vaccine manufactured by Pfizer and BioNTech came in a bottle labeled for five doses, but, with a little creativity by the person doing the injecting, could actually produce a sixth dose.

"About 80% of the vials — sometimes more, sometimes less — have an ‘extra’ full dose," said G. D. Kelen, director of the Johns Hopkins University Office of Critical Event Preparedness and Response. "The odd one even has a seventh dose. Overall, most have found about 16% more doses than was initially thought."

Vaccinators in West Virginia are actively trying to use the "extra" doses, and the state has been counting the additional doses as "extra" in its running count on the Department of Health and Human Resources’ online vaccine injection tracker.

Here’s how the dashboard looked on Feb. 1, the day of Justice’s cable TV comments. 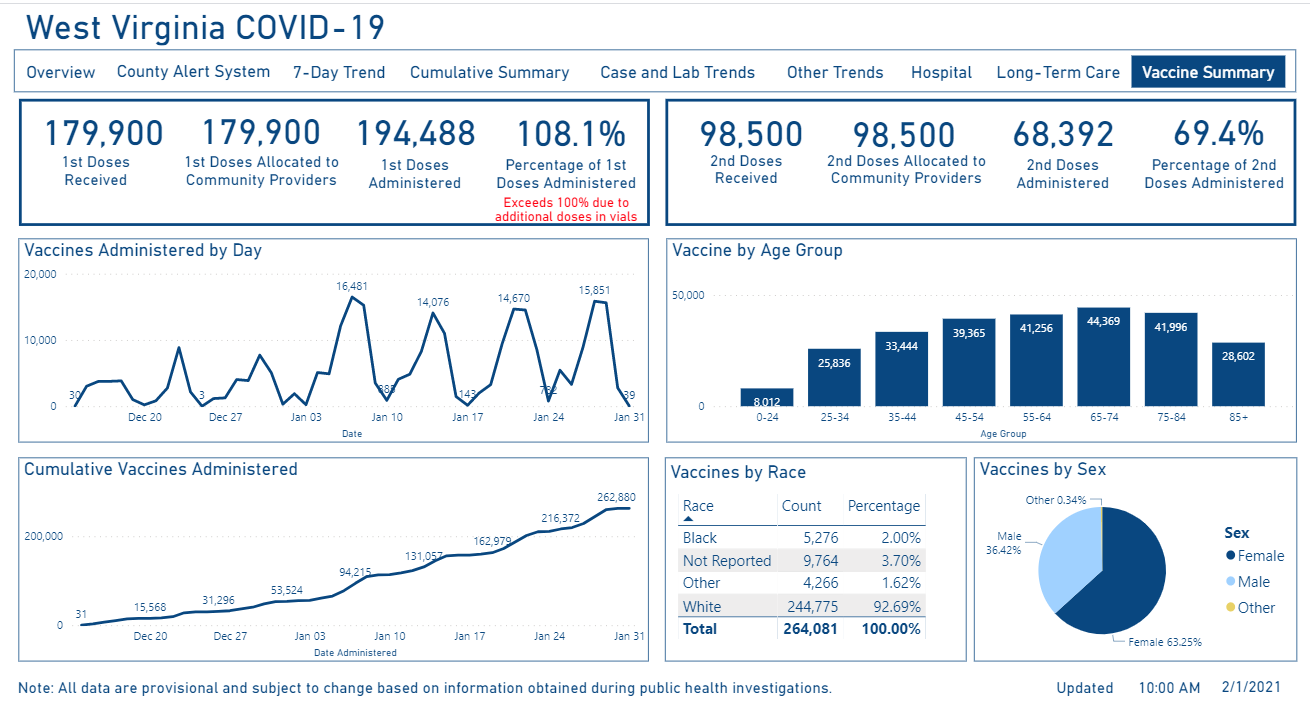 It’s worth noting that this isn’t a trick that only West Virginia follows. On Jan. 6, Pfizer won clearance from the Food and Drug Administration to label the bottle as including six doses rather than five.

By now, "every state is doing this," said Claire Hannan, executive director of the Association of Immunization Managers.

Not to say that getting that additional dose into arms is easy. It’s most practical if the health provider has access to a "low dead space" syringe. Normal syringes, given how they are structured, may not be able to access "extra" doses.

"The federal government is supposed to be including such syringes as part of the supplies that it provides to all states along with the vaccine itself," said Joshua Michaud, associate director for Global Health Policy at the Kaiser Family Foundation. Given the sudden need for these specialty syringes, the Biden administration is seeking to use the Defense Production Act to increase their manufacture.

West Virginia, for its part, had enough syringes on hand to utilize the "extra" doses "before the federal government began sending syringes in ancillary kits," said Allison C. Adler, communications director for the West Virginia Department of Health and Human Resources.

In general, West Virginia has received wide praise for its strong start on vaccinations.

During a briefing, White House coronavirus official Andy Slavitt singled out seven states for their early success on vaccinating residents, including West Virginia. (The others were Alaska, New Mexico, Connecticut, North Dakota, Oklahoma, and South Dakota)

That said, West Virginia’s success so far isn’t just a reflection of its effort to harness "extra" doses. The state is the only one to turn down a partnership with the national pharmacy chains CVS and Walgreens to carry out vaccinations in long-term care and assisted living facilities.

Instead, the state decided that its small, independent pharmacies were better positioned for that task in a largely rural, mountainous state with tight-knit communities and strong trust of local businesses.

That bet has paid off, experts say. In many cases, the small, independent pharmacies had existing relationships with local nursing homes and could start making appointments more efficiently than the bigger pharmacies could.

"West Virginia is about at the top of the charts," Mark McClellan, a former Food and Drug Administration commissioner, told the New York Times. "We need to get more states to the point that they have the vaccination capacity of West Virginia.

Given how well West Virginia is doing overall, some experts say that the state’s 108.1% talking point, while defensible, may be gilding the lily.

Already, Pfizer shipments that come packed with low dead space syringes are being counted as fulfilling six shots per vial under the federal purchase order, rather than five. This suggests that the denominator might now be more accurately described as six, not five.

In any case, offering any number greater than 100% seems "confusing," said Kaiser’s Michaud. "West Virginia is already doing much better than most other states by a lot of measures, so there’s not much of a need to overstate anything."

Washington Post, "Biden wants to squeeze an extra shot of vaccine out of every Pfizer vial. It won’t be easy," Jan. 22, 2021

NBC News, "'We crushed it': How did West Virginia become a national leader in Covid vaccination?" Jan. 31, 2021