President Joe Biden as he prepares to deliver his inaugural address on Jan. 20, 2021. (AP)

It was an inauguration like none before, squeezed between massive security and a pandemic that has killed over 400,000 Americans.

Instead of crowds, a sea of American and state flags filled the National Mall in Washington.

Armed National Guardsmen replaced cheering supporters along Pennsylvania Avenue, the traditional parade route from the Capitol to the White House.

Instead of 200,000 guests, a scant 1,000 — seated in pairs of folding chairs placed at least 6 feet apart — watched in person as President Joe Biden and Vice President Kamala Harris swore to uphold the Constitution.

In a move not seen in 152 years, former President Donald Trump was absent from the ceremony that marked the peaceful handoff of power. But in his inaugural speech, with outgoing Vice President Mike Pence and Republican congressional leaders in attendance, Biden called for a fresh start and an end "to this uncivil war."

Exactly two weeks after the storming of the Capitol by Trump supporters, and one week after the House impeached Trump for the second time, Biden focused on the need to quell the coronavirus, root out systemic racism, address climate change and confront domestic terrorism.

Invoking the signature theme of his campaign, Biden talked repeatedly about unity.

"Without unity there is no peace, only bitterness and fury," Biden said. "No progress, only exhausting outrage. No nation, only a state of chaos. This is our historic moment of crisis and challenge. Unity is the path forward."

Biden’s uplifting tone and themes of unity contrasted sharply with the most memorable lines of Trump's 2017 inaugural address. On that rainy January morning, Trump referred to "rusted-out factories scattered like tombstones across the landscape of our nation" and said that "this American carnage stops right here and stops right now." 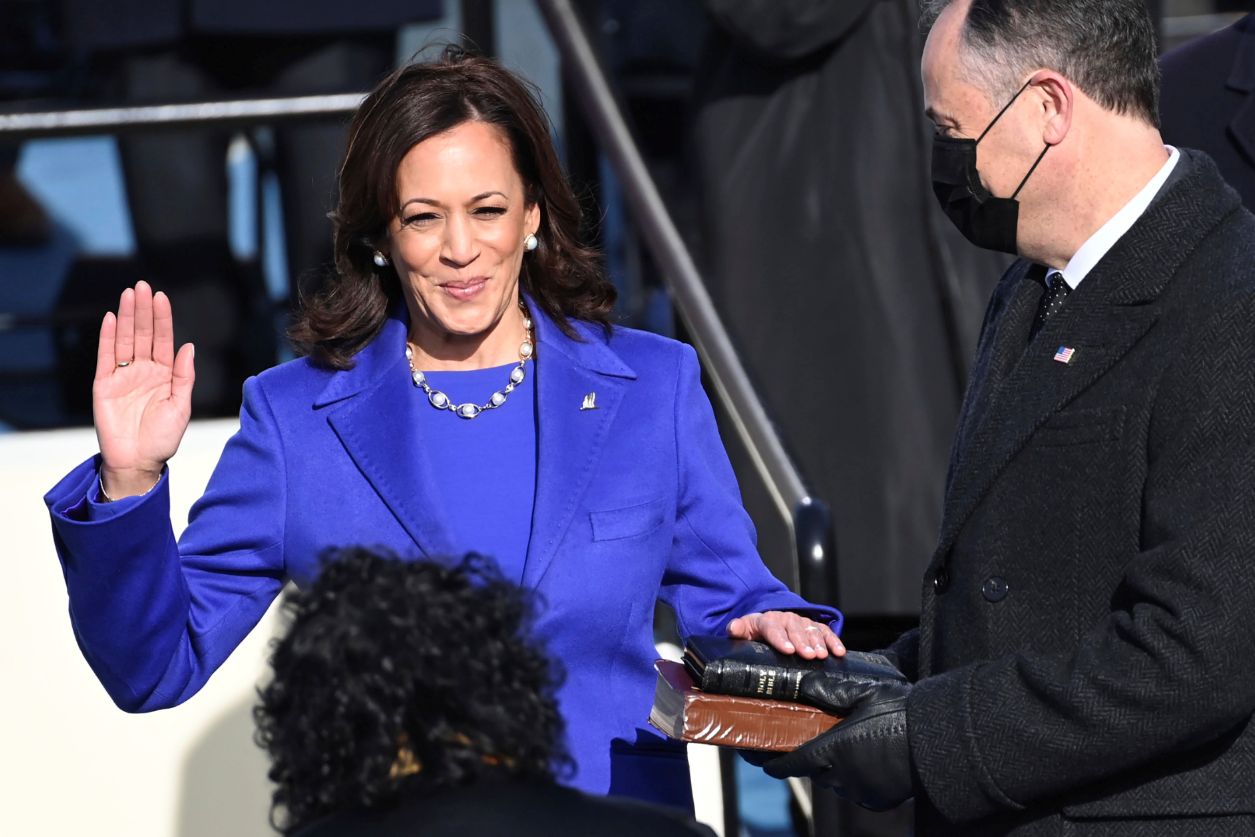 Kamala Harris is sworn in as vice president by Supreme Court Justice Sonia Sotomayor as her husband Doug Emhoff holds the Bible on Jan. 20, 2021. (AP)

During his address, Biden said, "There is truth and there are lies, lies told for power and profit."

As is often the case with inaugural addresses, Biden focused on broad themes. But we did find a few factual assertions we could check. Biden’s address stuck to claims that were factually defensible.

"A once-in-a-century virus, it silently stalks the country. It’s taken as many lives in one year as America lost in all of World War II."

This is close to accurate.

As Biden was speaking, the Johns Hopkins University coronavirus tracker was reporting 402,269 deaths in the United States. That is just shy of the 405,399 U.S. deaths during World War II, according to the Congressional Research Service. With the seven-day moving average of coronavirus deaths reaching 3,015 on Inauguration Day, the four-year World War II total was due to be matched by the coronavirus either on Jan. 20 or 21, less than a year after the virus reached the United States.

With this milestone reached, the only war that has killed more Americans than the coronavirus pandemic is the Civil War, which took between 618,000 and 750,000 lives on both sides, according to estimates. Currently, the Institute for Health Metrics and Evaluation at the University of Washington projects 566,720 COVID-19 deaths by May 1, even with vaccine distribution under way.

"Millions of jobs have been lost. Hundreds of thousands of businesses closed."

Biden was correct about jobs lost during the pandemic: Between February and December 2020, the number of nonfarm jobs nationally fell by more than 9.8 million.

As for businesses, while it’s undeniable that a large number have closed for good, the specific numbers are fuzzy.

One metric, the Yelp Local Economic Impact Report, counted almost 100,000 permanent, cumulative closures in its September report, plus another 66,000 temporary closures. The actual number could be higher, since not all businesses are captured by Yelp’s methodology. And these numbers are several months old by now.

"108 years ago, at another inaugural, thousands of protesters tried to block brave women marching for the right to vote."

He accurately described a clash in 1913, on the eve of Woodrow Wilson's inauguration (though not on the day of the inauguration). According to the Library of Congress, suffragists mobilized 5,000 women who were mistreated on the streets of Washington by unruly crowds and police.

"‘Women were jeered, tripped, grabbed, shoved, and many heard ‘indecent epithets’ and ‘barnyard conversation,’" according to contemporary reports cited by the Library of Congress. "Instead of protecting the parade, the police ‘seemed to enjoy all the ribald jokes and laughter and part participated in them.’ One policeman explained that they should stay at home where they belonged." 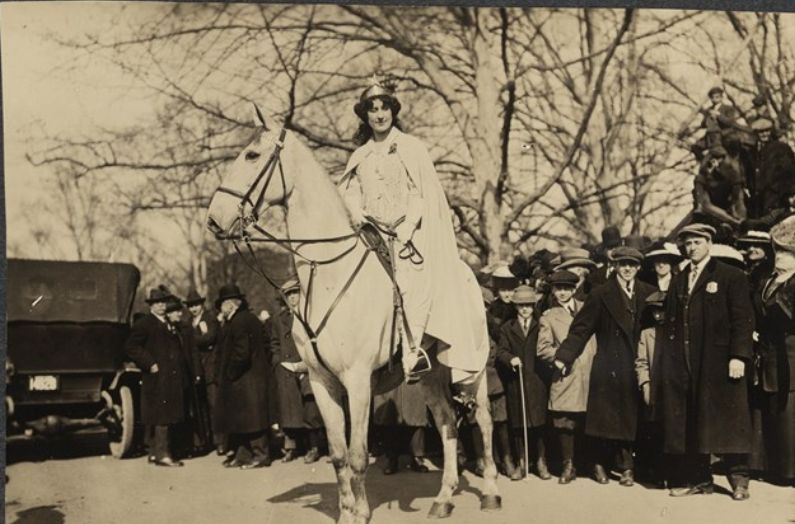 Suffragists picket the White House on the eve of President Woodrow Wilson's inauguration in 1913. (Library of Congress)
"Now, a rise of political extremism, white supremacy, domestic terrorism that we must confront and we will defeat."

This is another contrast Biden draws with Trump. Trump denied that he had any sympathies for white supremacists, but his comments at critical moments failed to silence the critique that he did. When a march by neo-Nazi groups and other white supremacists in Charlottesville, Va., turned violent, Trump said "you also had people that were very fine people, on both sides."

Trump decried all violent demonstrators, but during the presidential debates, when asked if he condemned white supremacists and militia groups such as the Proud Boys, Trump said, "Proud Boys, stand back and stand by."

Biden’s reference to the rise of such groups tracks back to the threats that FBI director Christopher Wray described in a September 2020 House committee hearing.

"Racially motivated violent extremists over recent years have been responsible for the most lethal activity in the U.S.," Wray told lawmakers. "Now this year, the domestic terrorism, lethal attacks we’ve had have, I think, all fit in the category of anti-government, anti-authority, which covers everything from anarchist violent extremists to militia types. We don’t really think in terms of left, right."

Wray drilled down and clarified that among the racially motivated extremists, "people subscribing to some kind of white supremacist-type ideology is certainly the biggest chunk of that."

When Biden cited Wray’s data during the campaign, we rated it True. 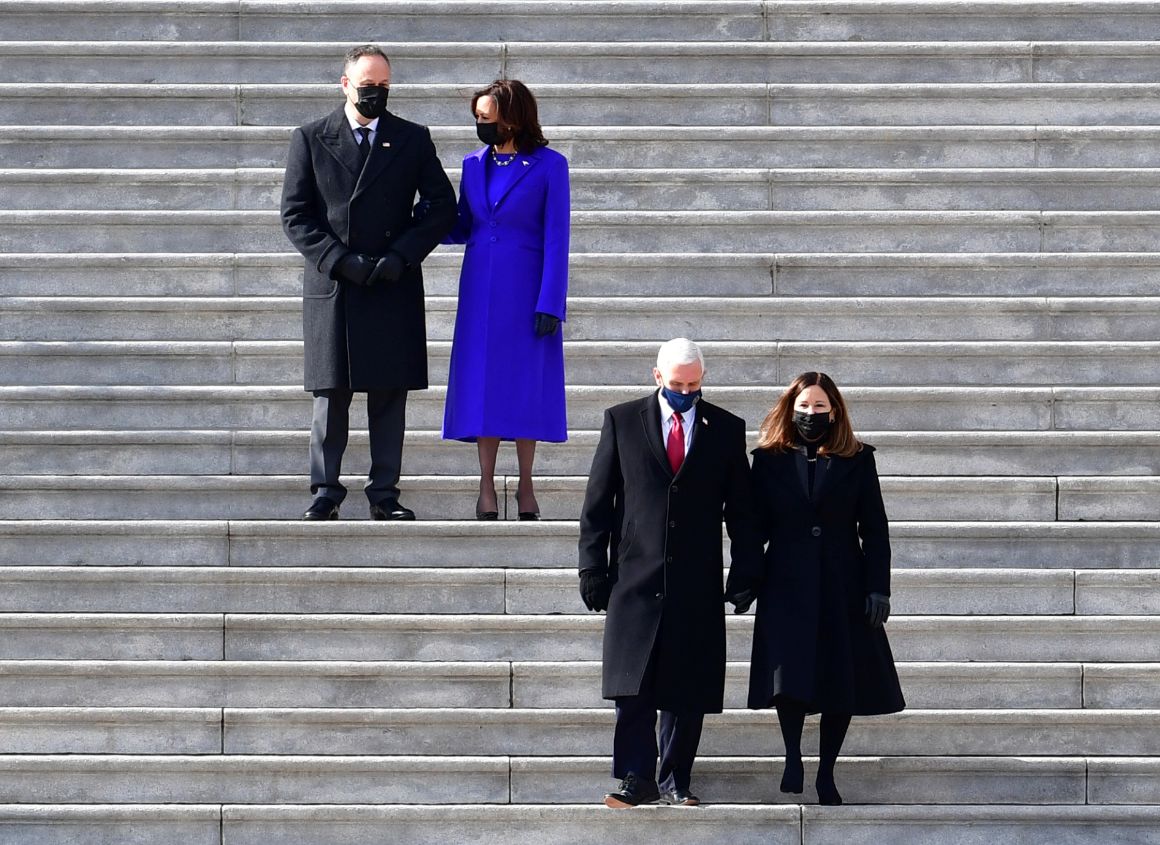 Vice President Kamala Harris and her husband Doug Emhoff, top, watch as former Vice President Mike Pence and his wife Karen walk down the steps of the Capitol on Jan. 20, 2021. (AP)
"We will repair our alliances and engage with the world again."

Biden has made it clear he plans to reverse Trump’s policies with the international community. With his America First agenda, Trump generated tensions between the United States and several of the top multilateral organizations.

He withdrew the country from the World Health Organization and the Paris Climate Agreement. With the North Atlantic Treaty Organization, Trump’s specific complaints about their defense spending might have been off-target, but he berated them for not spending more, and could take satisfaction that their spending increased. On our promise tracker, we rated that a Promise Kept by Trump.

But Trump’s stance with NATO came at a price. In NATO, Britain, France and Germany carry the greatest heft among the European members. French President Emmanuel Macron told his European partners they needed to start charting their own course. Macron questioned whether the U.S. was "turning its back" on Europe.

For his part, one of Biden’s first steps as president was to rejoin the Paris Climate Agreement. He said the U.S. will rescind Trump’s order that pulled the U.S. out of the World Health Organization, and he promised NATO America’s "enduring commitment."