Can student loan debt be canceled by a president’s executive order?

A student works in the library at Virginia Commonwealth University in Richmond, Va., in 2019. (AP)

• Canceling student debt up to $50,000 has been a rallying cry for many younger Democrats, who see their ability to borrow for homes or cars negatively impacted by a heavy student debt load. Advocates say the law allows President Joe Biden to do this by signing an executive order.

• Biden has promised to consider waiving outstanding student debt, up to a limit and for individuals under an income limit. But the law may not allow him to accomplish this goal simply by signing an executive order, experts say.

Can President Joe Biden cancel student loan debt with an executive order? Senate Majority Leader Chuck Schumer, D-N.Y., has said in multiple press conferences that Biden can wipe away such debt with a "flick of a pen."

Canceling student debt up to $50,000 has been a rallying cry for many younger Democrats, who see their ability to borrow for homes or cars negatively impacted by a heavy student debt load. As of January 2021, student loan debt held by 44.7 million Americans totaled $1.73 trillion, according to Federal Reserve data.

Biden’s approach was not as aggressive as many activists and some Democratic officeholders had wanted, and Biden did not include funding for forgiving student loans when he released his fiscal year 2022 presidential budget proposal in May 2021.

Critics of student debt cancellation, especially the most aggressive moves, argue that it would unfairly treat Americans who scrimped to pay back their student loans.

The White House has indicated that Biden is continuing to study the issue. He has asked Education Secretary Miguel Cardona to prepare a memo about his legal authority to cancel student loan debt, and Biden has also said he’d like Congress to take action. 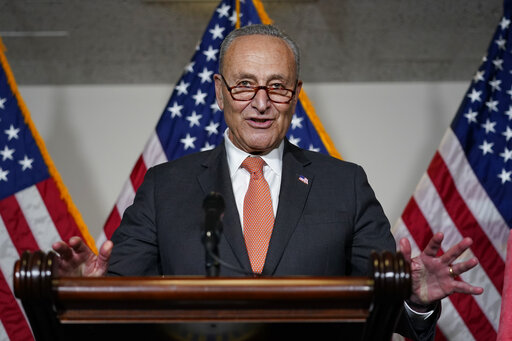 Still, Schumer and his allies are keeping up the pressure.

On June 9, Schumer joined forces with Sen. Elizabeth Warren, D-Mass., actor and activist Alyssa Milano, and the NAACP in a #CancelStudentDebt Voices event hosted by the group Student Debt Crisis.

In a tweet he sent that day, Schumer reiterated his claim about how easily the debt relief could be accomplished. "President Biden can #CancelStudentDebt with the stroke of a pen," Schumer tweeted.

I was so proud to join @SenWarren, @Alyssa_Milano, organizers, and so many Americans telling their stories and pushing for action on canceling student debt.

President Biden can #CancelStudentDebt with the stroke of a pen. https://t.co/o7bxHCQa9q

Is Schumer correct that Biden can cancel student loan debt? Because this is subject to legal debate and ultimately subject to judicial decisions, we won’t be rating it on our Truth-O-Meter. However, we found that the issue is not quite as clear as Schumer makes it sound.

The key provision that advocates of cancellation cite comes from the Higher Education Act, which was originally signed in 1965 and has been updated since.

However, experts disagree on whether the president can authorize widespread debt cancellation through an executive order. There’s enough of a legal question that any move by the president would likely prompt litigation, experts said.

"There are instances of presidents' executive orders being thrown out in the courts because they take actions that were not authorized by laws in the past," said Jason MacDonald, a political scientist at West Virginia University.

The Trump administration saw this kind of judicial pushback with its initial travel ban for people from Muslim-majority countries, MacDonald said.

While modest efforts to roll back student debt might not prompt legal obstacles, "the more ambitiously this authority is used, the greater the possibility of a legal challenge," said Judith Scott-Clayton, a professor of economics and education at Columbia University.

One of the contested issues could be Congress’ past changes to the Higher Education Act that cited narrow conditions under which student debt may be forgiven. Past federal legislation has addressed debt relief for teachers and workers in the public sector, cases in which schools close before a student earns a degree, and cases of a student’s death or disability. It’s not as clear whether blanket forgiveness would pass legal muster, experts said.

Similarly, the Higher Education Act’s authority to "compromise, waive, or release" has typically been used in the past for loans only in unusual circumstances, on a case-by-case basis, and for loans that are not expected to be repaid. Despite many recent graduates’ heavy debt loans, it’s not clear that all of their loans would be deemed unpayable.

"‘Compromise’ usually is used when someone cannot possibly pay a debt to the government, so the government cuts a deal," said Adam Looney, senior fellow at the Brookings Institution. "That’s very different from mass cancelation."

Meanwhile, a different law, the Federal Claims Collection Act, provides federal agencies with the authority to collect or compromise claims and suspend or terminate collection action.

However, this law "imposes a high standard for when the government can compromise a debt, to narrow circumstances like when the debtor is unable to pay and that inability is verified, or when the cost to collect the debt would be too high to justify the collection." Looney said.

Email interview with Judith Scott-Clayton, a professor of economics and education at Columbia University, May 24, 2021

Email interview with Adam Looney, senior fellow at the Brookings Institute, May 23, 2021

Andrew Cuomo
stated on January 14, 2021 a tweet:
“No state gets back less from Washington than New York state.”