In this Jan. 6, 2021 photo, supporters of then-President Donald Trump try to break through a police barrier at the Capitol in Washington. (AP)

It’s been almost six months since hundreds of pro-Trump rioters stormed the U.S. Capitol on Jan. 6 in a brazen attempt to stop Congress from certifying Joe Biden’s victory in the 2020 presidential election.

Since then, some have tried to pass the blame onto others, like antifa. Others tried to claim that it was just an ordinary "tourist visit."

Now, a new theory has emerged: the entire breach was secretly orchestrated by the FBI.

This new idea originated from a June 14 article by Revolver News, a right-leaning website run by Darren Beattie — a former Trump White House speechwriter who was fired in 2018 after he appeared on a panel with a white nationalist. In 2020, Beattie was appointed to a commission to oversee U.S. Holocaust memorials.

The story’s premise was quickly and prominently promoted by Fox News host Tucker Carlson. It soon made its way to the Twitter accounts of Republican politicians, like Reps. Marjorie Taylor Greene of Georgia and Matt Gaetz of Florida, and was amplified in various viral social media posts.

Revolver’s article, headlined, "Unindicted Co-Conspirators in 1/6 Cases Raise Disturbing Questions of Federal Foreknowledge," speculates that because there are unindicted, unnamed co-conspirators included in some of the Capitol rioters federal charging documents, it’s reasonable to assume that those people are FBI informants or agents.

It also questions whether these figures were "instigators" during the storming of the Capitol, suggesting that not only was the government involved, but its agents also caused violence and damage, and did nothing to stop it.

The story never answers its own questions and only offers circumstantial evidence, including the fact that informants and undercover FBI operatives were involved in the foiled October 2020 plot to kidnap Michigan Gov. Gretchen Whitmer and take over the state government.

Steven D’Antuono, the former director of the Detroit FBI field office, was promoted to help lead the FBI’s Washington, D.C., office after his team successfully thwarted the kidnapping. He is now working on the Capitol riot cases. The story claims this is suspicious, and says D’Antuono was "quietly promoted." But the FBI issued a press release about the news and local media wrote stories about it.

In any case, this comparison is fraught. The plot in Michigan never happened, as is the case with most schemes that involve undercover agents and result in criminal charges.

More importantly, experts explained that, under almost any circumstances, undercover government operatives and informants cannot be described in government filings as co-conspirators. The main reason: A component of criminal conspiracy is the agreement to commit a crime. That isn’t what undercover operatives do.

"Undercover agents do not commit the crime of conspiracy by conducting an investigation," she said. "Referencing unindicted co-conspirators is disfavored but necessary in some situations, although never to document the role of law enforcement agents."

PolitiFact reached out to Revolver News but did not hear back. The FBI declined to comment.

The Justice Department’s manual, a reference for U.S. attorneys and department employees responsible for federal prosecutions, stipulates that, in almost all cases, federal prosecutors generally should not identify unindicted co-conspirators in conspiracy indictments.

"Ordinarily, there is no need to name a person as an unindicted co-conspirator in an indictment in order to fulfill any legitimate prosecutorial interest or duty," the provision says.

Besides being a sitting president, there are multiple other reasons why someone might be included in an indictment as an unindicted co-conspirator: They haven’t been identified, there isn’t enough evidence to bring charges against them, they’ve been granted immunity of some kind, various cooperation deals, prosecutorial guidelines that counsel against charging, or other shortfalls in the cases that require delaying or forgoing charges.

The Revolver story singles out certain unnamed persons in the government’s filings for Thomas Caldwell, a 65-year-old alleged Capitol rioter and member of the Oath Keepers, a far-right anti-government militia group.

But those same documents contradict the article’s own premise.

The indictment begins by identifying "PERSON ONE" as the leader of the Oath Keepers. It’s well known that person is Stewart Rhodes. Rhodes has publicly accused prosecutors of manufacturing made-up crimes. There’s no evidence he’s an undercover government agent.

The Washington Post reported that there’s reason to believe that "PERSON TWO" in the documents, who the Revolver article depicted as suspicious, is Caldwell’s wife. She has not been charged with a crime. The indictment says that Caldwell and person two took "selfie" photos of themselves on the balcony and in other areas around the capitol. The Post reported that, on Facebook, Caldwell posted photos of him and his wife, writing "Us storming the castle. Please share. Sharon is right with me. I am such an instigator!" 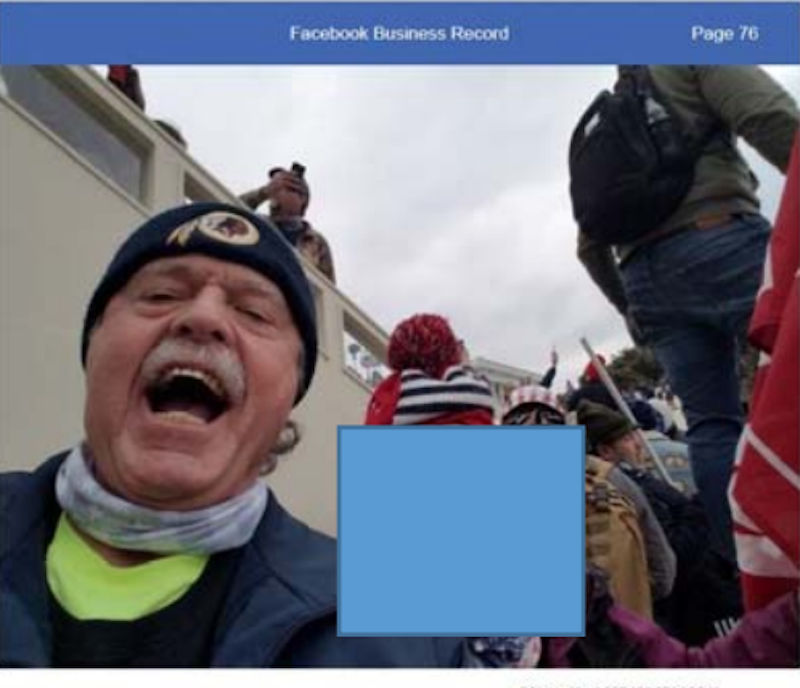 A photograph captured in court documents shows Thomas Caldwell with an unidentified person on the Capitol balcony. (U.S. Department of Justice)

In two separate June hearings in front of Congress, FBI director Christopher Wray and Pentagon officials answered questions about the failure to adequately prepare for and respond to the Jan. 6 attack.

Wray, who was appointed by Trump in 2017, told the House Judiciary Committee on June 10 that the FBI field office in Virginia issued a warning on Jan. 5, sent to the Capitol police, that extremists were preparing to travel to D.C. to commit violence.

He added that "almost none" of the close to 500 people charged or found to be involved in the attack so far had been under FBI investigation previously.

"You can be darn sure that we are going to be looking hard at how we can do better, how we can do more, how we can do things differently in terms of collecting, analyzing and disseminating intelligence," Wray said.

A proposed bipartisan, independent commission to examine the Jan. 6 riot —modeled on the one established to investigate the 9/11 terror attacks with equal Republicans and Democrats — failed in the Senate. The final vote was 54-35, with Republicans withholding the votes necessary to bring the bill up for debate.