Trump fans pose a hypothetical: Could Donald Trump become speaker, then president in 2023?

• A Facebook post laid out a convoluted plan by which Donald Trump could become president again before the 2024 presidential election.

• Experts say the scheme could work, in theory. But the scenario playing out in the real world would run into some all-but-insurmountable practical obstacles, especially when it runs into the requirement that two-thirds of the Senate vote to remove President Joe Biden and Vice President Kamala Harris.

A recent Facebook post offered a hopeful scenario for supporters of former President Donald Trump: It laid out a plan by which Trump could be president again in 2023, and then run again in 2024.

The Feb. 25 post offered a photograph of a smiling Trump at a lectern in the White House, with the following caption:

"Trump can run for Congress in 2022, in FL. If he wins the seat and Republicans take over the House of Representatives, he could become the Speaker of the House. Then, his first act could be impeaching Joe (Biden) and Kamala (Harris). If it works, he finishes out the remainder of Biden’s term and can still run for President in 2024. Wouldn’t that be a hoot!" 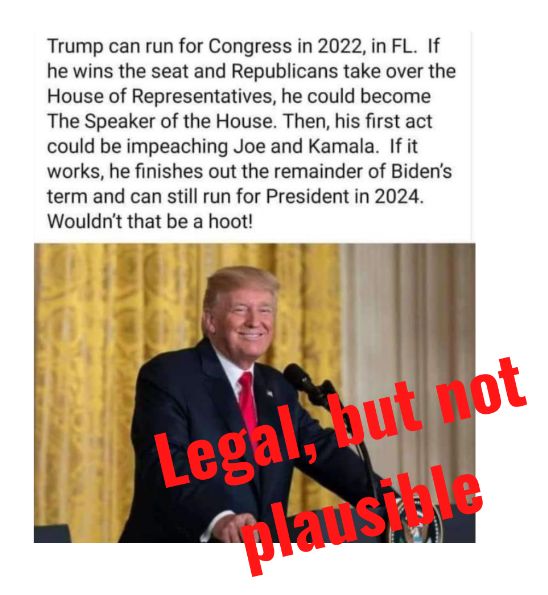 In this case, the experts we contacted said the scenario could work — in theory. And while it would probably be allowed under the law, the likelihood of the scenario playing out in the real world would run into some all-but-insurmountable practical obstacles.

Let’s look at each element of the scenario individually.

He cited Article I, section 2, of the Constitution, which says, "No Person shall be a Representative who shall not have attained to the age of twenty five Years, and been seven Years a Citizen of the United States, and who shall not, when elected, be an Inhabitant of that State in which he shall be chosen."

He wouldn’t even have to run in his own congressional district, which, as it happens, is strongly Democratic. The district’s representative, Democrat Lois Frankel, won by about 20 points in 2020, and Trump lost it by about 17 points in the same election.

Instead, Trump could run in a safer Republican seat elsewhere in the state without moving. The courts have consistently ruled that states cannot pile on extra requirements to run for the House beyond those laid out in the Constitution.

There would even be precedent for a former president moving to the House: John Quincy Adams served as president from 1825 to 1829 and then in the House from 1831 to his death in 1848.

"If he wins the seat and Republicans take over the House of Representatives, he could become the Speaker of the House."

Given the narrow Democratic margin in the House, it’s entirely plausible that the GOP could take over the chamber after the 2022 elections. And if they did, a Rep. Trump could be elected speaker.

Ironically, he wouldn’t even have to run and win a House seat to become speaker.

"A speaker of the House need not be a member of Congress," said John Fortier, a research fellow at the American Enterprise Institute. "That said, we have never elected a speaker from outside the House. But it is constitutionally permissible."

"Then, his first act could be impeaching Joe (Biden) and Kamala (Harris)."

As the recent House impeachments of Trump himself have shown, votes to impeach are mainly cast along party lines, so a Republican-controlled House could probably pull it off. If the evidence of high crimes and misdemeanors is thin, then doing so might not be politically appealing. But again, as a practical matter, it could be done.

The more difficult part — also clear from the impeachments of Trump — would be getting the Senate to remove Biden and Harris from office.

Removal by the Senate requires a two-thirds vote, so even if the GOP were to take control of the Senate in the 2022 elections, it’s almost impossible that they would go from 50 members today to 67 after one election in which only one-third of the body will even be standing for reelection. (And that would assume that every one of those 67 Republicans votes to remove, something that would be a heavy lift.)

Essentially, the impeach-and-removal scenario is "inconceivable without some new facts, such as Biden and Harris doing something so bad that even Democrats want them out," said Brian Kalt, a law professor at Michigan State University.

"If it works, he finishes out the remainder of Biden’s term"

The House speaker would indeed be next in line for the presidency as long as the offices of president and vice president are vacant, according to a statute that’s been on the books since the 1940s

The first is that some legal scholars believe the statute is unconstitutional for including members of Congress in the line of presidential succession, on the grounds of separation of powers between the governmental branches. "A case like this would lead to a heated dispute," Kalt said.

However, Fortier said that even though he generally agrees that the statute is constitutionally dubious, "I think it is unlikely a court would find the law unconstitutional in a crisis situation like this."

The second issue could be a bigger practical obstacle.

Experts say it’s doubtful that impeachment processes for both Biden and Harris could be run in lockstep. So whoever remains after the first removal — either Biden or the newly elevated President Harris — would have the ability to nominate a new vice president. Confirmation of a new vice president requires a simple majority of both chambers.

There is no guarantee that a Republican Congress would vote to confirm the new vice president before pursuing the second removal, but the existence of an alternative Democratic vice presidential nominee would make it even harder for Senate Democrats to vote to remove the remaining member of the Biden-Harris team. 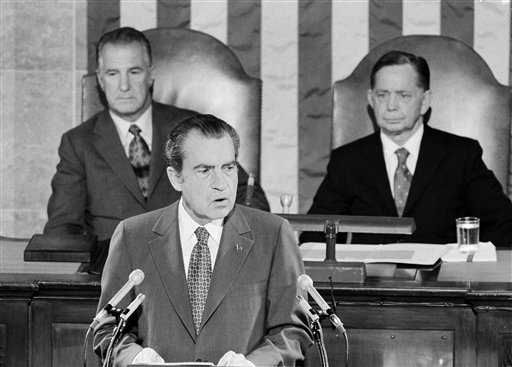 The closest historical parallel occurred in the 1970s, when Vice President Spiro Agnew was under fire to resign even as President Richard Nixon was heading towards impeachment. After Agnew resigned, with Nixon weakened but still in office, "there were some congressional Democrats who argued that Congress should refuse to confirm Gerald Ford as a new vice president, then impeach Nixon so that Speaker Carl Albert would become president," Fortier said.

Fortier said the effort was serious enough that Ted Sorensen, a former aide to President John F. Kennedy, "was commissioned to write transition memos laying out how to effect a smooth transition to the Carl Albert Presidency. I have these memos in my files; they are extensive.  Albert himself never seriously considered this, and I do not think there was anywhere close to majority support for this even in the Democratic caucus. But it was considered."

If everything else was to fall in line, then this should, too.

The 22nd Amendment specifies that if you inherit part of someone’s term, but that part is two years or less, it doesn’t count towards the two-term limit.

The only thing to keep in mind is that the Republican House and Senate would need to complete the impeachment-and-removal process after Jan. 20, 2023, said Steven S. Smith, a political scientist at Washington University in St Louis. Doing it quicker than that would expand Trump’s second tenure in office beyond two years, thus making him ineligible to run again in 2024.

Bottom line: There are no significant legal or constitutional barriers to the scenario outlined in the Facebook post. But the chance of this happening in the real world? Vanishingly small.

KNKX News, "Why Don't Congressional Candidates Have To Live In The Districts They Seek To Represent?" Sept. 1, 2016