How many terrorists have attempted to cross the southern border? Data is limited and imprecise

A surge of migrants arriving at the southern border has Republicans blaming President Joe Biden while sounding the alarm over what they contend is a frightening threat to national security.

It’s not just families and children who are trying to get into the country, some Republican lawmakers say. People on the terrorist watchlist are trying to cross the border, too, several House Republicans claimed during a trip to Texas.

"Individuals that they have on the watchlist for terrorism are now starting to exploit the southern border," said Rep. John Katko, R-N.Y.

House Republican Leader Rep. Kevin McCarthy, R-Calif., who led the Republican delegation to Texas March 15, suggested that lawmakers heard about this detail from border authorities on the ground. McCarthy relayed a conversation in which he said a border official confirmed to the lawmakers that people on the terrorist watchlist were showing up at the border:

"We asked him, ‘Which countries are people coming from?’ ‘Yemen, Iran, Sri Lanka.’ That’s what’s coming across. They even talked about Chinese as well," McCarthy said.

Is it true that people on the terrorist watchlist have attempted to come across the southern border recently?

We don’t know. There’s no publicly available data to back it up, because the authorities that would have that information won’t release or discuss it. Neither Katko nor McCarthy cited official, on-the-record sources.

Who’s on the terrorist watchlist?

The federal Terrorist Screening Database, commonly known as the terrorist watchlist, includes people whom authorities say are known terrorists or suspected of being involved in terrorist activities. People can be "nominated" to the watchlist by a federal government agency or foreign government.

As of 2017, the list included the names of an estimated 1.2 million people — including 4,600 U.S. citizens and lawful permanent residents, according to a federal lawsuit filed by 23 U.S. citizens who found themselves being routinely subjected to additional screening while trying to travel.

The plaintiffs said not one of them had been formally notified by the government that they were included in the watchlist. In 2019, a judge ruled that the government failed to provide constitutional due process to U.S. citizens potentially included in the watchlist. There was no evidence or contention that any of the plaintiffs in that case satisfied the definition of a known terrorist, the judge said. The federal government appealed and litigation continues.

‘Not a new phenomenon’

At a March 17 House committee hearing days after Republicans went to Texas, Alejandro N. Mayorkas, secretary of homeland security, pushed back on the notion that people on the terrorist watchlist were suddenly trying to come in through land borders because of Biden administration policy.

"Individuals who match that profile have tried to cross the border, the land border, have tried to travel by air into the United States, not only this year, but last year, the year prior, so on and so forth," said Mayorkas. "That is not a new phenomenon."

Mayorkas said the U.S. had a "multi-layered security apparatus" to identify and apprehend such people.

Rep. Dan Bishop, R-N.C., asked Mayorkas if he was aware of reports that four people on the terrorist watchlist had been "apprehended at the border recently."

"I am," Mayorkas said, without elaborating.

Bishop then asked if a terrorist would have the right to seek asylum in the United States. Mayorkas said no.

In another exchange, Rep. August Pfluger, R-Texas, credited border agents with telling him in the last two months that, on average, 4,500 to 6,000 people per day avoid apprehension at the border. Pfluger then asked Mayorkas if he was certain that agents had apprehended 100% of the known or suspected terrorists "that have crossed the border."

"Congressman, I have no reason to believe that we have not," Mayorkas said. "But I must tell you, I am completely unfamiliar with the data that you reference. I’m not certain of the accuracy of the information that you have." 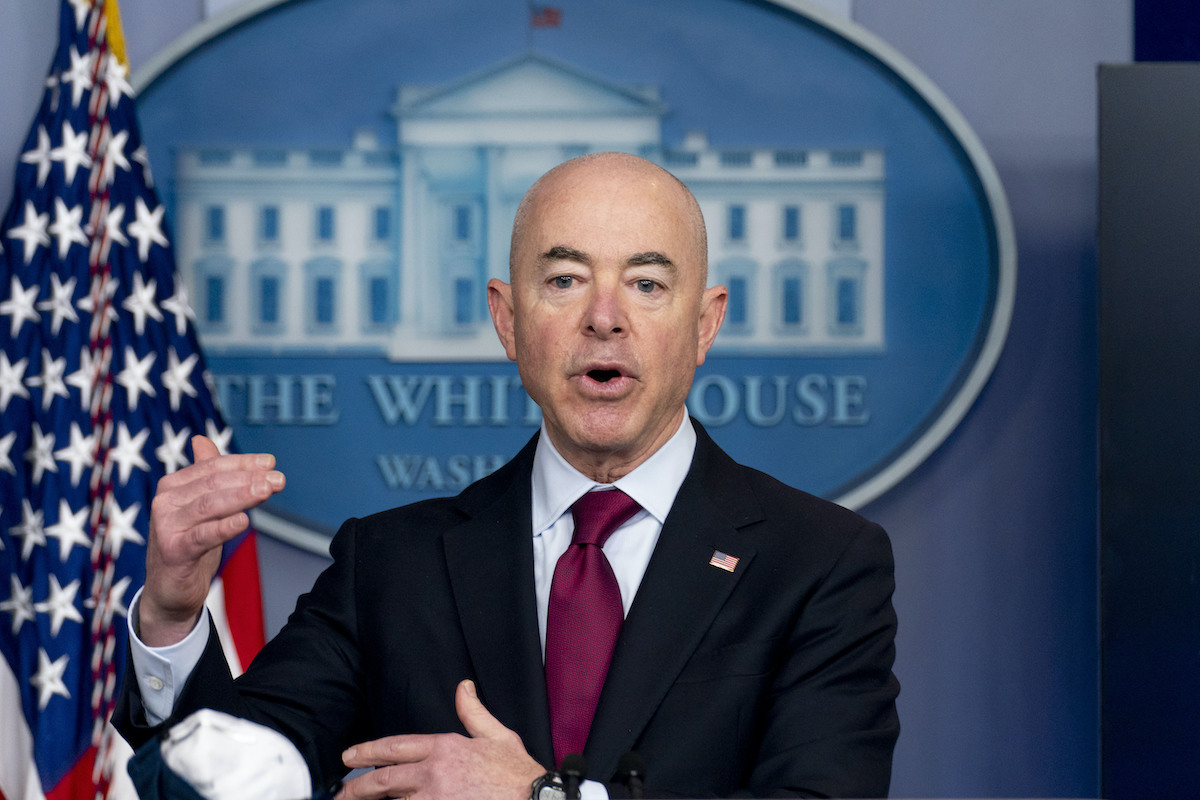 Recently, piecemeal reports about terrorists at the U.S. border have grabbed some headlines  — but none have provided conclusive insight.

In January 2018, then-Vice President Mike Pence claimed that authorities apprehended seven known or suspected terrorists — a day — at the southern border. PolitiFact Texas rated that Pants on Fire, finding no data to back that claim.

In a joint report in 2018, the Justice Department and DHS said that officials encountered 2,554 individuals on the terrorist watchlist who were attempting to enter the country in fiscal year 2017. That breaks down to about seven people a day. Most of them were attempting to come by plane. About 13% were trying to enter by land. But this report again leaves us grasping for data because it did not say how many were coming from Canada or Mexico, or how many were trying to come in legally versus illegally.

DHS in 2019 offered an even higher tally for 2017 — saying more than 3,700 people on the terrorist watchlist were stopped from entering the country that year. It affirmed that most of them were trying to enter by air. Yet again, the agency did not provide details about the southern border — only generalizations:

"The number of terror-watchlisted individuals encountered at our southern border has increased over the last two years," a DHS webpage from 2019 read. "The exact number is sensitive and details about these cases are extremely sensitive."

It’s worth noting that the State Department’s most recent annual report on terrorism also had no data on terrorists coming from the southern border in 2019, but it did say this: "There was no credible evidence indicating international terrorist groups established bases in Mexico, worked directly with Mexican drug cartels, or sent operatives via Mexico into the United States."

Over the years, news reports have told of immigration officials encountering people on the terrorist watchlist. But these stories generally have not been attributed to a public database or to a named government official.

NBC News in 2019, for instance, said it had "obtained" data provided to Congress in 2018 by CBP. That report said that in the first half of fiscal year 2018, immigration officials at southern border ports of entry encountered 41 people on the terrorist watchlist — 35 were U.S. citizens or lawful permanent residents, and six were "non-U.S. persons."

Separately, five people on the watchlist were stopped between legal ports of entry over the same time period, "but it was unclear from the data which ones were stopped at the northern border versus the southern border," NBC said.

Axios reported on March 16, a day after the Republican lawmakers’ press conference in Texas, that CBP "confirmed to Congress today that four people arrested at the southern border since Oct. 1 match names" on the terrorist watchlist. Axios attributed the information to "a congressional aide briefed on the correspondence." The report did not specify whether those four people had been trying to cross the border legally or illegally.

Pfluger asked Mayorkas at the House hearing to commit to giving a classified briefing on the "affiliation of these terrorists." Mayorkas said he’d honor his obligation to provide information to the committee.

Christian Science Monitor, Terror and the Mexico border: How big a threat?, Jan. 15, 2017

NBCNew.com, Only six immigrants in terrorism database stopped by CBP at southern border from October to March, Jan. 7, 2019