No, it isn’t clear that unemployment checks are the main reason jobs go unfilled

Dave and Amy's, a restaurant in Walled Lake, Mich., is part of the surge in hospitality industry job openings. (PolitiFact/Krishnan Anantharaman)

Over the course of the COVID-19 pandemic, Washington has committed over half a trillion dollars to cushion laid-off workers from economic pain. The most recent move came in the $1.9 trillion American Rescue Plan that added $300 a week to unemployment checks.

The money provided welcome relief to millions of households. But now a debate is raging over whether the additional unemployment benefits are deterring people from seeking work.

"We need to stop paying people more to sit at home than to work," said U.S. Rep. Dusty Johnson, R-S.D., sponsor of a bill that seeks to end the payments in June, instead of September under current law. "It’s past time to get America back to work."

Over a dozen Republican governors have acted on their own to end the extra federal benefit, setting June as the last month for the supplemental payment in their states.

Feeding their concerns is an April jobs report that showed the economy added and filled 266,000 jobs. While that might be a healthy sum in normal times, for a nation springing back from the pandemic recession, it fell way short of what economists expected. There are still 9.8 million people looking for work.

The question is, with vaccinations just beginning to reach a sizable chunk of the population and more communities emerging from pandemic restrictions, are unemployment checks the main reason people are not taking jobs?

Economists are studying whether that’s the case — but there’s also strong data that says a lack of child care and fear of the virus might be just as important.

For those who look to data to resolve this, a rock solid answer remains out of reach.

The economists we reached said the country will have to wait at least a few months for clarity. For the moment, here’s what the numbers show.

A gap between openings and hirings

We found a number of news stories that spotlight business owners who have said they can’t fill jobs and that reference high unemployment checks as the reason. But that’s anecdotal evidence, not statistical.

And because there are lags in Labor Department data releases, it’s tricky to assess in real time why restaurants or factories might be unable to fill openings.

The gap was also high before the pandemic, reaching a peak of 1.6 million in March 2019. So there’s not necessarily a clear link between the size of the gap and unemployment benefits.

Wage trends could tell us whether employers are having to compete against unemployment benefits to attract workers. Labor economist Michael Strain at the American Enterprise Institute, a market-oriented think tank, said rising wages bolster the idea that employers are doing more to attract workers. In March, the Labor Department found that the seasonally adjusted three-month average company cost for wages and salaries rose 1.1%.

"That’s what you'd expect to see if demand (for labor) is increasing and supply isn't keeping up," Strain said.

That suggests that some workers are sitting on the sidelines, but it doesn’t explain why people aren’t taking jobs.

The impact of unemployment checks on hiring

Strain said that roughly half of American workers have a higher income from unemployment benefits than they would from working.

Studies do find that sort of effect. During the Great Recession, Washington extended unemployment benefits to 99 weeks, compared with the normal 26 weeks. A 2013 study by economists at Princeton University and the Federal Reserve Bank of San Francisco found that that extension increased workers’ time on unemployment by 7%.

When the government added $600 to weekly unemployment checks last summer, the number of people searching for work dropped. But there were caveats. One study concluded that while the number of job applications declined, the boost in unemployment benefits mainly served to reduce what it described as "wasteful applications" — people applying for jobs they might not want or didn’t have the right qualifications for. The authors said "employers did not experience greater difficulty finding applicants for their vacancies … despite the large increase in unemployment benefits."

Another analysis compared the rate of people being hired before and after the $600 increase, and found that the rate was "largely stable."

But those studies pre-dated the U.S. vaccine rollout — conditions today are very different.

States have a lot of leeway in setting unemployment benefits. So, how important the extra $300 was for individuals depends on how generous their home state was before the federal government augmented those payments. The $300 would presumably have less of an effect in a state like Massachusetts, where benefits are higher, than in a state like Mississippi, where they are lower.

Economist Arindrajit Dube at the University of Massachusetts-Amherst wanted to see whether this difference was affecting unemployment trends at the state level.

He zeroed in on the hospitality and leisure industry, where 331,000 jobs were added in April, more than any other sector. His "illustrative calculation," as he called it, showed no evidence that a more generous payment reduced job gains as of March. 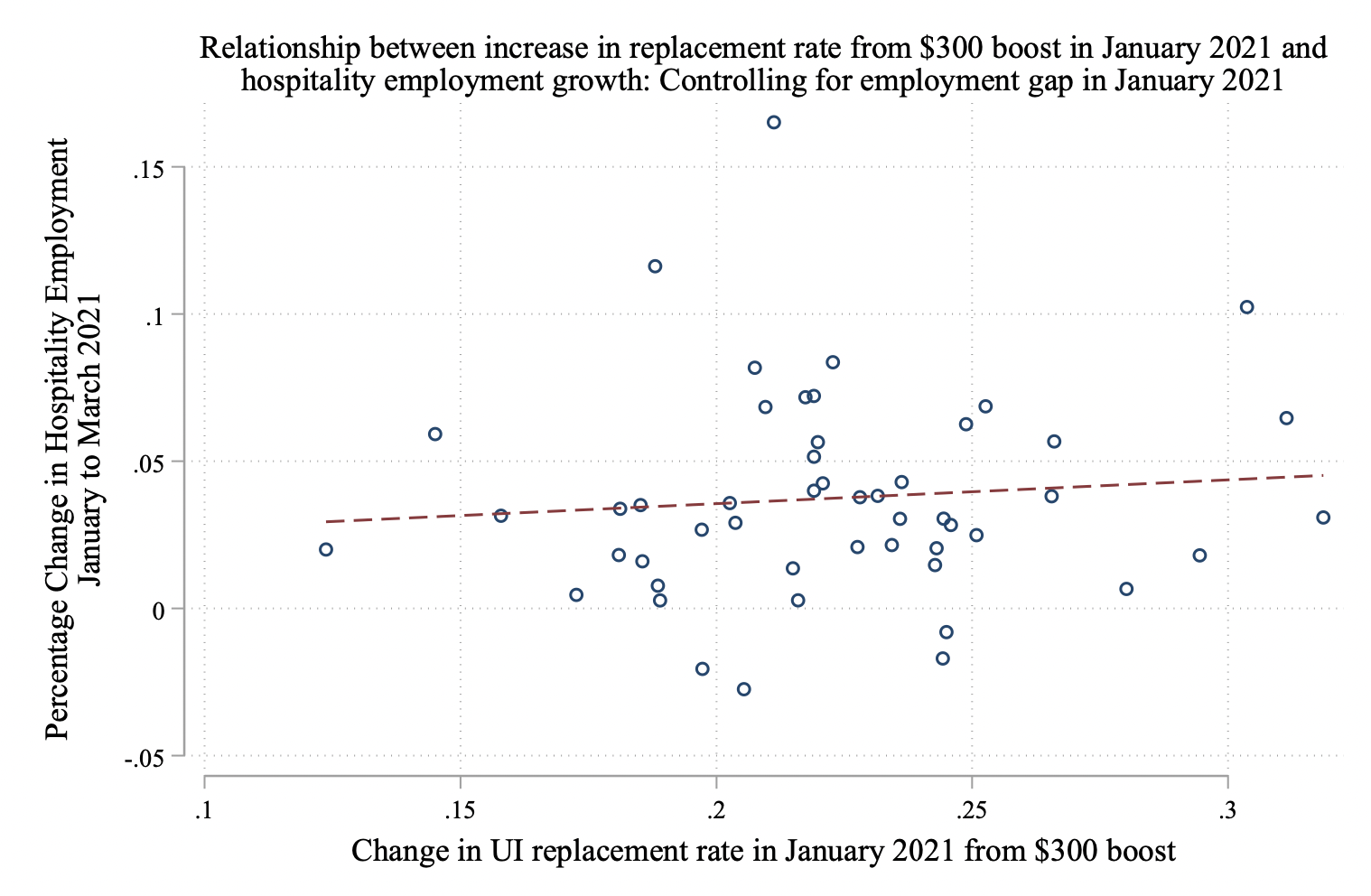 That said, Dube said the added federal benefit would likely lead some people to take their time in taking a new job.

"A generous unemployment check might slow down reentry," he said. "That’s not necessarily a bad thing. It could help workers find better matched jobs."

Other drivers: Child and elder care and COVID fear

When Commerce Secretary Gina Raimondo was asked if unemployment checks were keeping people at home, she said she hadn’t seen that yet.

"The No. 1 reason now that people aren't going back to work is fear, or if they can't find childcare, or schools are still closed," Raimondo said May 9.

Raimondo’s office pointed to an experimental government survey that asks people why they aren’t working. It’s called the Household Pulse Survey and it’s larger in scope than the readings that the Labor Department uses to gauge the unemployment rate.

In the last half of April, an estimated 6.7 million said they were caring for children not in school or day care. Another 4.2 million said they were "concerned about getting or spreading the coronavirus." Those numbers don’t map readily to the standard job reports, but they do give a sense of the scale of these factors.

Raimondo said the pandemic was particularly hard on women. At the trough of the pandemic downturn, the unemployment rate for women was 16.1%, nearly three points higher than men. The virus cratered the hospitality industry, a sector where many women work, and it upended day care and schooling, making it harder for them to return to work.

Stefania Albanesi, professor of economics at the University of Pittsburgh, said work schedules in hotels and restaurants can be "unpredictable and non-conventional, so childcare challenges may be particularly severe for mothers when considering those openings."

Government numbers show that having kids makes a difference in labor force participation, and it matters more for women than men. Labor force participation is still down for both men and women compared with January 2020, but women are coming back into the workforce more slowly. Women with young kids under age 6 got back into the workforce at half the pace of men over that period; among women with  school-age children, it’s one-third.

Broadly, the economists we reached agree that unemployment benefits play some role in workers’ decisions about going back to work. And just as broadly, they agree that other factors matter, too. The debate is over which factor matters most.

Dube said from what he’s seen in the hospitality industry, "the effect is very small."

But there are two points of agreement.

Both researchers said the pandemic has thrown a lot of conventional wisdom into question.

And they both are keenly interested in studying what happens in the 13 states that plan to cut benefits early. Those states, they said, are a natural experiment.

U.S. Congress, A bill to shorten the extension, and the amount, of Federal Pandemic Unemployment Compensation in order to get Americans back to work, May 11, 2021

U.S. Bureau of Labor Statistics, Celebrating Women’s History Month with a Look at Women in the Labor Force, March 30, 2021

National Bureau of Economic Research, The Gendered Impact of the COVID-19 Recession on the US Labor Market, February 2021

US Bureau of Labor Statistics, Employment recovery in the wake of the COVID-19 pandemic, December 2020

National Bureau of Economic Research, Why Has the US Economy Recovered So Consistently from Every Recession in the Past 70 Years?, May 2020

American Enterprise Institute, The jobs boom is real despite disappointing April, May 7, 2021

Pew Research,U.S. labor market inches back from the COVID-19 shock, but recovery is far from complete, April 14, 2021

Interview, Arindrajit Dube, professor of economics, University of Massachusetts-Amherst, May 12, 2021