Ballot drop boxes were popular in 2020. Then they became a GOP target

These drop boxes — often big, sturdy, slotted, steel receptacles — had been used in blue and red states for about two decades without controversy. But in the heat of 2020 politics, they became a flashpoint for partisan bickering as then-President Donald Trump described them as a "voter security disaster."

Now, debate over drop boxes has spilled into the halls of state legislatures, where Republicans have sought to rewrite laws after Democrats benefitted from a surge of voting by mail.

Drop boxes are secure boxes often located outside of polling sites or government buildings where voters can drop in their completed mail ballots. They enable voters to bypass the U.S. mail system and deposit absentee or mail-in ballots at secure locations to be collected later by election officials. 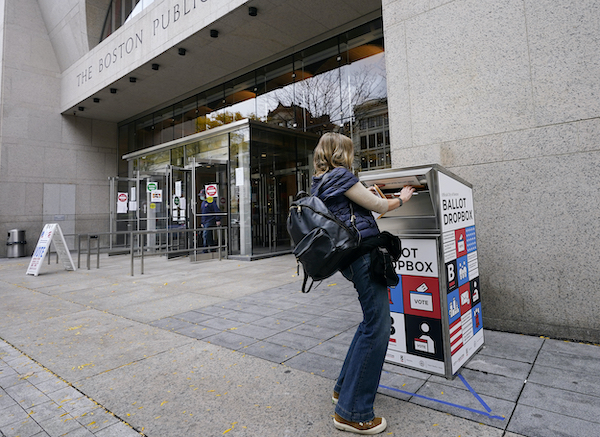 Voter Linda Borman drops her ballot into the ballot box outside the Boston Public Library, Monday, Oct. 26, 2020, in Boston. (AP)

Though federal and state officials concluded the November election was safe and secure, GOP state lawmakers have since proposed hundreds of bills to change overall voting laws as well as rules for ballot drop boxes.

Georgia, Florida and Iowa have recently passed new restrictions on ballot drop boxes, prompting legal challenges, with proposals pending in other states. The restrictions vary from state to state but generally cover security measures or limit the numbers of drop boxes or available hours.

Some local election officials in both parties say the new rules are unnecessary. Craig Latimer,  president of the Florida Supervisors of Elections and Hillsborough County’s supervisor, said that Florida’s new law makes returning mail ballots harder. Lawmakers voted for a bill requiring that the boxes be physically manned by employees.

"We should be looking for cost-effective ways to expand their use, including the use of secure 24-hour drop boxes with camera surveillance," Latimer said. "Instead, the new legislation prohibits that."

In Congress, Democrats have sought to pass H.R. 1, sweeping new national election rules that include requiring states to provide voters with around the clock access to drop boxes for several weeks. But federal voting rights legislation is in limbo which means state laws will likely govern drop box rules for the 2022 election.

Drop boxes, are generally more secure than standalone mail boxes. They typically weigh hundreds of pounds, can be bolted into the ground and have small slots through which people can deposit their ballots. Documented cases of security problems are rare. (Foul play can also occur with the postal service or mailboxes.) 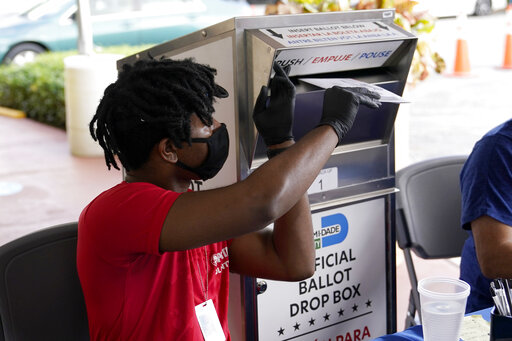 Each state that has drop boxes can set their own rules on locations, hours and security standards.

Oregon, Colorado and Washington have had 24-hour drop boxes for years. In some Colorado counties, as many as 70% of voters return their ballot via a drop box, said Hillary Hall, who works at the National Vote at Home Institute and is a former Boulder County election official.

Republican-led Utah has used drop boxes for several years. Justin Lee, director of elections in Utah, told PolitiFact that his state hasn’t had security problems and has seen no evidence that the boxes favor one party or another.

We asked Snead why new rules for drop boxes are necessary when none of those are requirements to use a regular post office mailbox to return a ballot.

"The fact that you can’t bring absolute security to the process doesn’t mean you bring no security — you secure what you can," Snead said.

Here’s what the new rules and proposals for ballot drop boxes look like in some key battleground states.

Georgia: The state election board added drop boxes in 2020 as an emergency rule during the pandemic. In March, Gov. Brian Kemp signed a sweeping election law that simultaneously makes drop boxes part of state law but restricts how many there can be and when they can be used.

All counties must have at least one drop box. But if a county wants to add more, it can only add one drop box for every 100,000 registered voters or else one for each early voting location. Georgia Public Radio found that for Fulton County, which includes most of Atlanta, the new law would allow eight drop boxes — down from 38 in 2020. In Fulton County, more than half of all absentee ballots cast were returned using a drop box.

The law also restricts use of drop boxes to the same hours early voting locations are open, which renders moot a reason why some voters use them: to turn in ballots at night, or after the early voting period has ended.

Florida: More than 1.5 million voters used drop boxes to vote during the 2020 election. And though Florida Supervisors of Elections reported no problems, Gov. Ron DeSantis signed a new elections bill in May while calling for increased security.

"You can't just leave these boxes out where there's no supervision, where they're in all hours of the night," DeSantis said on Fox News during a media appearance in which he signed the bill. "So, the drop boxes will be available only when they're monitored and during regular voting hours. And I think that's the appropriate way to do it."

The state law says that except for secure drop boxes at the election supervisor’s office, a box may only be used during a county’s early voting hours. It also requires all drop boxes to be monitored in person by an employee of the supervisor. The bill creates a civil penalty of $25,000 for a supervisor who leaves a drop box open outside of early voting hours.

Some supervisors of elections pushed back on the provisions, including Mike Bennett, a Manatee County Republican.

"It’s stupid, ok?" Bennett told PolitiFact. "You cannot find a single supervisor of elections in the state of Florida who felt this bill was necessary. It was a solution looking for a problem."

Iowa: In March, Republican Gov. Kim Reynolds signed a law limiting counties to one drop box each. It also requires video surveillance and emptying the box four times per day.

A spokesperson for the Iowa Secretary of State, Kevin Hall, said prior to the new law, Iowa law required voters to return absentee ballots via mail or in-person directly at the county auditor’s office. Though the new legislation marks the first time ballot boxes are specifically permitted in law, more than one third of Iowa’s 99 county auditors indicated in August they had used a drop box in the past, according to the Des Moines Register.

Joel Miller, auditor in Linn County, which includes Cedar Rapids, said it makes no sense to limit his county of 160,000 voters to one drop box — the same number as for a county of 2,800 voters.

"I think auditors should have the discretion to place more than one box, and I do think that would be determined by population — maybe one box for every 10,000 voters or something like that," said Miller, a Democrat. "That would be certainly more equal than the way it is now."

Miller also criticized the rule that boxes must be emptied four times per day as arbitrary and burdensome for small counties that only have a handful of staff. Drop boxes in Linn County had a device that sent a signal to employees when they were full, he said.

Some proposals in other states are unlikely to make it into law, such as in Wisconsin. GOP lawmakers have sought to limit drop boxes, but Democratic Gov. Tony Evers plans to veto the measures.

In Michigan, one bill would require ballot drop boxes to close at 5 p.m. on Election Day — three hours earlier than in 2020. Another would require drop boxes to be monitored by high-resolution cameras— a move that Republican Grosse Ile Township Clerk Ute O’Connor said would add costs.

"I just don’t see what they’re trying to find that would justify that added expense and process," O’Connor said.

A spokesperson for Gov. Gretchen Whitmer, a Democrat, told PolitiFact that "any piece of legislation that seeks to take away a person’s right to vote or creates barriers to voting is a non-starter."

In Ohio, the state passed a temporary bill before the 2020 all-mail primary allowing drop boxes although a few counties previously used boxes. A proposed bill would set drop box rules in permanent law, allowing three per county and limiting the use of drop boxes to 10 days before election day.

In discussing the legislation during a radio show, the bill’s author, state Rep. Bill Seitz described voters who used the boxes in 2020 as "covid cowards." 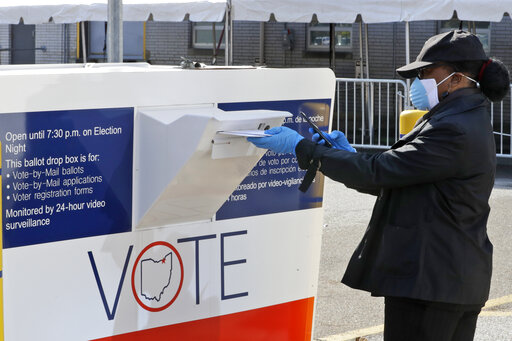 Marcia McCoy drops her ballot into a box outside the Cuyahoga County Board of Elections, Tuesday, April 28, 2020, in Cleveland, Ohio. (AP)

RELATED: Georgia voting law does not make it a crime to drop off grandma’s ballot

RELATED: What’s in Georgia’s new voting law that lost it the All-Star Game

RELATED: Ballot drop boxes have long been used without controversy. Then Trump got involved

Ohio Capital Journal, What changes Ohio elections officials do — and don’t — want to see, May 11, 2021

Lawfare Blog, The Rise of Ballot Drop Boxes Due to the Coronavirus, Aug. 27, 2020

Email interview, Gerri Kramer, spokesperson for Craig Latimer, Hillsborough Supervisor of Elections and president of the Florida association of election supervisors, May 10, 2021

Email interview, Hillary Hall, senior advisor to state and local election Officials at the National Vote at Home Institute, May 11, 2021