An image of dog crates sitting in front of a battered helicopter spread quickly online during the U.S. withdrawal from Afghanistan, drawing the ire of fans of dogs and the U.S. military.

"Our helpless service dogs, caged and abandoned at the Kabul airport, left to starve to death," tweeted actor James Woods.

"The Department of Defense has ordered ALL contract military working dogs to be left behind in #Afghanistan. These aren’t just service dogs left behind, they’re AMERICAN SOLDIERS!!" one Facebook post said. 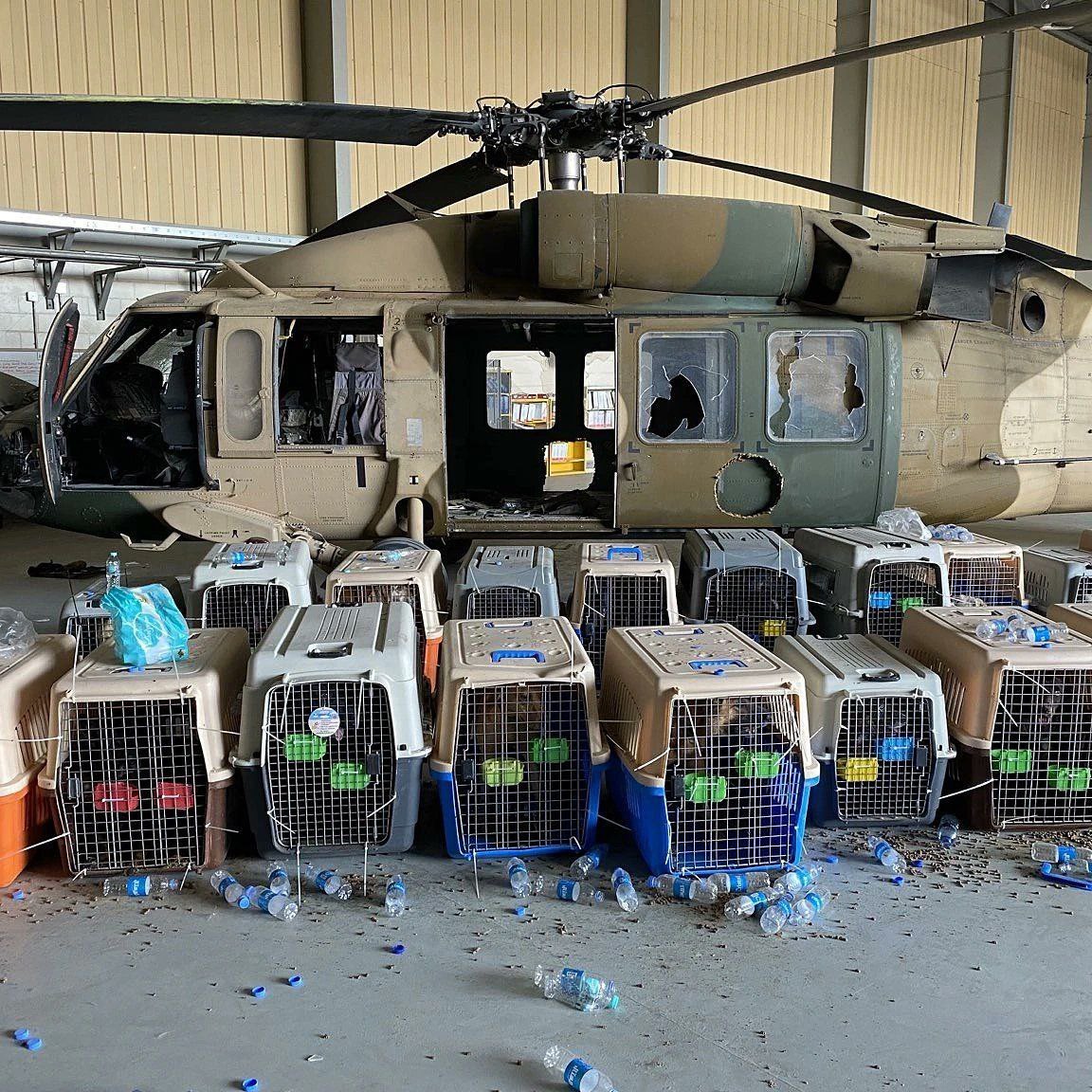 More than 120,000 people were evacuated from Afghanistan between Aug. 14 and Aug. 30, the Biden administration said. But the tight deadline and deteriorating conditions at the airport resulted in some Americans and thousands of Afghan allies being left behind, including former U.S. interpreters and their families.

But the federal government says the dogs pictured do not work for the military. The Defense Department said its dogs were evacuated with their handlers in mid-August.

"The U.S. military did not leave any dogs in cages at Hamid Karzai International Airport, including the reported military working dogs," Pentagon spokesman John Kirby tweeted on Aug. 31. "Photos circulating online were animals under the care of the Kabul Small Animal Rescue, not dogs under our care."

The nonprofit Military Working Dog Team Support Association, which supports military dogs and their handlers, also disputed the claims: "We are 100% certain that there are zero U.S. military working dogs abandoned in Kabul. Zero. The U.S. military did not leave a single MWD behind."

While the image doesn't show U.S. military-owned dogs, some of these animals likely belonged to defense contractors and could be characterized as "contract working dogs."

SPCA International, which has been working with Kabul Small Animal Rescue to evacuate animals from Afghanistan, said that the dogs in this photo "are contract working dogs that are owned and trained by private companies and are contracted for work that can include military and other operations."

Some animal welfare groups like American Humane dismissed any distinction between the dogs' contract or military status. The organization called on Congress to start classifying contract dogs the same way it does military dogs.

Advocates say the dogs are safe, but where they go from here is uncertain. They said there are a lot of reasons that the dogs were unable to leave.

Here’s an overview of what we know about the dogs left in Kabul.

What’s going on with evacuation efforts for these animals?

Kabul Small Animal Rescue, a group that has cared for animals injured or displaced during the war in Afghanistan, posted updates on social media about its efforts to evacuate animals at Kabul’s airport.

The animals in the photo were being flown out as part of "Operation Hercules," the group’s crowd-funded, non-military evacuation effort.

The organization posted on Twitter that the animals included "50+ service dogs" — which might have led to the social media confusion about their military status.

Please allow these animals to get out incl 50+ service dogs!!! We cannot let them die at #Kabulairport. They are in, just need cargo space! #OperationHercules @USMARCENT https://t.co/1pp0P6PQaw

These dogs largely belonged to Afghans, U.S. embassy employees and independent defense contractors who were unable to bring their animals with them as they evacuated.

NPR reported on the rescue’s frantic effort to airlift more than 200 dogs and cats — as well as the organization’s staff and their families — before the Aug. 31 deadline for foreign troops to withdraw from Afghanistan. Charlotte Maxwell-Jones, the group’s American director and founder, told NPR for its Aug. 25 story that some evacuation flights didn’t allow animals.

Veteran Sheepdogs of America, a nonprofit that works with U.S. veterans, posted the now-viral image on Aug. 29 showing some of the 51 dogs in crates in front of a damaged military craft at Kabul’s airport.

Joshua Hosler, the organization’s president, said as recently as Sept. 1 on Twitter that the dogs are safe and efforts to get them out of Afghanistan continue.

Maxwell-Jones posted this update on her rescue group’s Facebook page on Aug. 31: "We are busy making plans, checking them twice, sorting out details, and keeping things quiet to maintain our own and the animals' security. We know it's not the most satisfying feed to follow, but please know that behind the scenes we are busting our tails to do everything we can to save our furry friends, and we deeply appreciate everyone's continued concern and support."

Why were the dogs unable to leave?

Multiple groups and individuals involved in Operation Hercules have cited a series of setbacks that include multiple chartered flights falling through, unrest at the airport, stringent U.S. safety regulations, and more. Some flights didn’t allow animals so they could prioritize evacuating people.

SPCA International said dogs under the care of Kabul Small Animal Rescue were unable to board military aircrafts, and numerous chartered flights were not granted access to the airport.

"We are heartbroken that the aircraft we secured to transport the rescued dogs of Kabul Small Animal Rescue out of Afghanistan were not ultimately allowed to take the animals and their caretakers safely out of the country," Lori Kalef, SPCA International’s director of programs, said in a news release. "Our team has been working around the clock and has exhausted every possible option and resource we could in our mission to rescue the dogs before the U.S. military withdrawal from Afghanistan. We’ll continue to do everything we can to evacuate Kabul Small Animal Rescue’s staff and animals from the country after August 31."

We reached out to SPCA International for more information but did not hear back.

Defense Department spokesman Eric Phahon told a USA Today reporter that the dogs in the photo could not be flown out on military flights "because of customs," and a chartered plane that was supposed to take the animals never arrived or contacted the agency. The Defense Department did not respond to PolitiFact’s questions, and the White House referred us to Kirby’s tweet.

The SPCA and other groups blamed a temporary ban on bringing dogs into the U.S. from 113 countries — including Afghanistan — deemed to be a high risk for rabies.

The Centers for Disease Control and Prevention said it could grant a permit to people wanting to bring a dog into the U.S. from a high-risk country, but permission needed to be requested at least six weeks before the dog’s U.S. arrival.

"Dogs that arrive from high-risk countries without advance written approval from CDC will be denied entry and returned to the country of departure at the importer’s expense," the agency said.

The SPCA said rescuers applied for an emergency exemption with the CDC to get the dogs out but were not successful.

In response, the CDC told PolitiFact that it will not issue permits for shelter or street dogs from Afghanistan, but it would consider applications for pets with "proper documentation in coordination with the Department of State."