What are 'tactical' nuclear weapons? And what do they mean for Russia, Ukraine and the world?

Damaged and burned vehicles at a destroyed metallurgical plant in an area controlled by Russian-backed separatist forces in Mariupol, Ukraine, on April 18, 2022. (AP)

Russia’s invasion of Ukraine is going poorly enough that President Vladimir Putin might decide to use what are known as tactical nuclear weapons, according to both Ukrainian and U.S. leaders.

In an interview, Ukrainian President Volodymyr Zelenskyy told CNN’s Jake Tapper that all countries should be prepared for the possibility that Putin could use nuclear weapons. CIA Director William Burns also warned of this possibility during a recent speech.

Nuclear weapons haven’t been detonated as tools of war since 1945. But with increasing concern about their risks, we researched what tactical nuclear weapons are, what Russia would seek to accomplish by using them, and how the West might respond.

What is a tactical nuclear weapon?

Nuclear experts say the term "tactical nuclear weapon" is typically used to describe a nuclear weapon with comparatively low impact and fired from a relatively close distance. Sometimes these are referred to as "low yield" nuclear weapons.

"Their intended purpose is for attacks on military formations in the field or bases and logistics hubs," said Brendan Green, a professor at the University of Cincinnati who studies military doctrine and international affairs. The targets could be as limited as a group of tanks or a large infantry unit, said Richard K. Betts, a professor of war and peace studies at Columbia University.

But just because these nuclear weapons are considered small doesn’t mean their impacts would be minor. In the Russian nuclear arsenal, Green said, most nuclear weapons that would be considered "tactical" would be "as large or larger than the bombs that destroyed Hiroshima and Nagasaki" to end World War II. Because the U.S. bombs were dropped on sizable Japanese cities, they are estimated to have killed 100,000 residents and injured a similar number.

"Even one of these weapons would severely mess up the target," Green said, although the impacts would depend on how high in the air the bomb was detonated, how built-up the target area was, and how much flammable material was nearby.

Russia is thought to have about 2,000 tactical nuclear weapons, said Matthew Bunn, a nuclear policy analyst at Harvard University’s Kennedy School of government. The United States has fewer — a couple hundred, depending on the precise definition. Most are B61 bombs that would be delivered by aircraft, Bunn said. 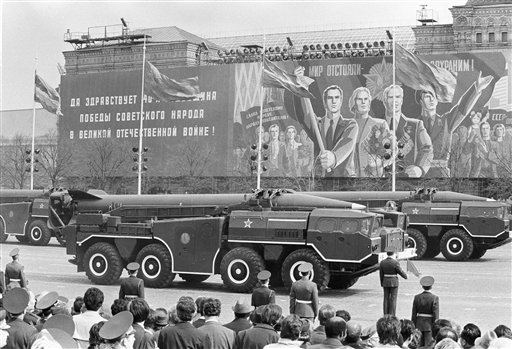 In theory, there could be a military benefit from using a tactical nuclear weapon — namely, causing battlefield carnage more quickly and completely than conventional weapons could. But military experts agreed that an incremental advantage on the battlefield is not why Putin might use them.

If the war goes badly enough for Russia, Putin might pursue a nuclear detonation in desperation. For instance, he might do it if he is "so desperate to demonstrate power and show that he has somehow achieved a win," said Mai’a K. Davis Cross, a professor of political science and international affairs at Northeastern University.

While a tactical nuclear weapon could be aimed at a populated area, it wouldn’t have to be, if the purpose is to show defiance and resolve, experts said. Putin could detonate a weapon over the sea, in the atmosphere, or in a lightly populated area.

How might the West respond to a tactical nuclear detonation?

The West, led by the U.S., has several options, none of them appealing. It could ignore Russia’s detonation; it could give in to whatever Russia is demanding; or it could escalate the conflict.

While the pressure on the West to respond would be intense, a direct nuclear response would be the riskiest course. Although a nuclear tit-for-tat would not inevitably spiral into global annihilation, it would raise the risk of that happening, Green said, probably to unacceptable levels.

"Whether or when escalation would stop is anyone's guess — a game of chicken on a grand scale," Betts said.

The West may have some room to maneuver in its response, depending on the nature of a detonation. The destruction of a city would be harder to let pass, but an explosion in an unpopulated area and without significant direct casualties could allow the West to mount a response short of detonating its own nuclear weapons.

"If the Russian shot was really a ‘demonstration,’ like a high-altitude air burst that would be little more than a bright flash in the sky with no ground damage, possibly cooler and wiser heads would prevail," said John Pike, the director of globalsecurity.org.

Whatever type of nuclear detonation Putin might decide to undertake, the diplomatic consequences against Russia would be swift, experts agreed.

"If Russia used nuclear weapons, the West would certainly double down on turning Russia into a pariah state for all eternity, and might well have increased success at that enterprise," Green said. Even a demonstration explosion "would be a big step for Russia, and would carry heavy long-term consequences."

Ultimately, though, no one has a perfect answer for how to respond to a Russian escalation to nuclear conflict. "Hope is not a plan," Pike said.

Could Russia’s use of a nuclear weapon open a Pandora’s box for the rest of the world?

Even if the norm against using nuclear weapons isn’t irreparably broken going forward, Russia’s decision to detonate a nuclear weapon would weaken the norm. And if that happens, the world "will probably be different in important ways than the world we live in now," Green said. However, he added, "It is very hard to predict exactly how."

"It would encourage stronger calls for nuclear disarmament or arms control, along with wider moves by countries to acquire their own nuclear forces, or use them, depending on the apparent success or failure of the Russian initiative," he said.

Ultimately, there is little certainty about how the scenario would play out.

"What's realistic?" Betts said. "Who knows? The world has no experience with this sort of action."

CNN, "Exclusive: Zelensky says world should be prepared for possibility Putin could use nuclear weapons," April 15, 2022

Bulletin of the Atomic Scientists, "A hurting stalemate? The risks of nuclear weapon use in the Ukraine crisis," March 2, 2022

Email interview with Brendan Green, assistant professor of political science at the University of Cincinnati, April 18. 2022