Rep. Lauren Boebert, R-Colo., addresses July 23, 2022, conference attendees. In October, Boebert was among conservatives who repeated the unsubstantiated claim that schools were providing litter boxes for students who identify as cats. (AP)

Since January 2022, when it was propelled across the internet in the U.S. by a conservative Twitter account, the false claim has stubbornly persisted that school districts are providing litter boxes for students who identify as cats or furries.

"In my district, I had a pastor come to me and he said he is being told that in the one school district — and I’m not saying this is the case, we don’t know, it’s unconfirmed," said Minnesota state Rep. Tim Miller, a Republican, in April. "But he is being told by multiple people that there is a litter box in one of the locker rooms."

Miller was one of three lawmakers in the state who shared the unsubstantiated rumor that month.

In the months leading up to the midterm election, online mentions of the false narrative increased significantly, as Republican candidates repeated the hoax and news outlets tried to put the falsehood to rest.

The highest number of mentions in a single week — more than 25,000 — came the week of Oct. 10, analysis from Zignal Labs, a media intelligence company, shows. That spike coincided with two things: an NBC News investigation that debunked the myth and subsequently increased online conversation of the hoax; and false claims amplified by talk show host Joe Rogan. (Rogan initially claimed he heard the story from his friend’s wife, who is a teacher; he later said it was unsubstantiated.)

School officials nationwide have said time and again that the claims have no merit. PolitiFact and other fact-checkers have repeatedly looked into these claims in various states accused of installing school litter boxes. Every time, there has been no evidence to support the allegations, which experts say are transphobic.

After claims about one location are disproved, the narrative often reemerges in a different location, targeting a different school district.

Researchers who specialize in furries — a community of people with an interest in depictions of anthropomorphic, cartoon animals — told PolitiFact that they’d never heard of furries requesting  litter boxes as accommodations and said the inaccurate narrative reflects a fundamental misunderstanding of the furry fandom.

The claims are related to the weaponization of the phrase "identify as," used in flippant remarks or harmful jokes meant to deride diverse gender identities. In one 2014 example, the phrase "I sexually identify as an attack helicopter" emerged as a transphobic meme.

In April 2016, The Christian Post published an opinion piece titled, "Should we provide litter boxes for people who identify as cats?" It portrayed bathroom accommodations for gender-diverse people as "social madness" and suggested allowing them would result in people requesting litter boxes next.

The specific claim that schools are providing litter boxes for students who identify as cats or furries seemed to first emerge in 2021, targeting the Prince Edward Island’s Public Schools Branch in Canada. After months of calls and emails about the rumors, Director Norbert Carpenter dismissed them publicly. He said the claim was "simply false," and told CBC that the rumor seemed to be a backlash to some school policies. 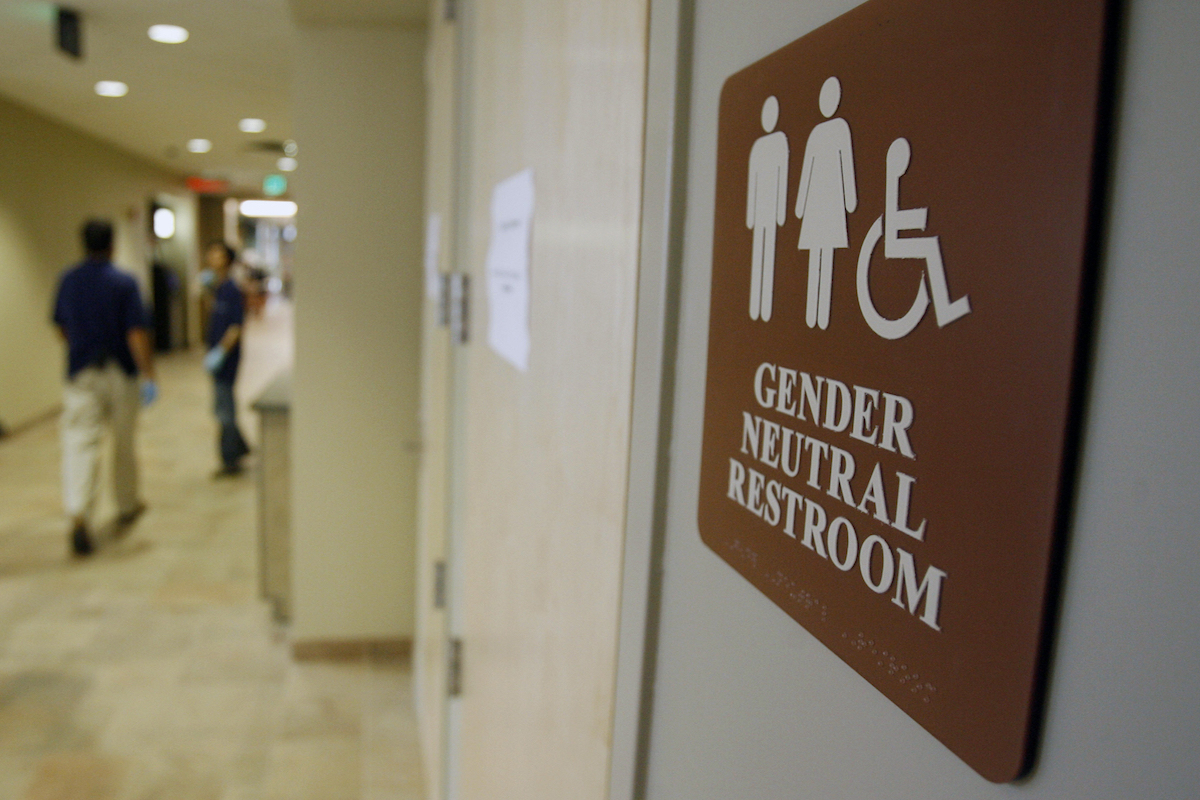 A sign marks the entrance to a gender-neutral restroom at the University of Vermont in Burlington, Vermont, Aug. 23, 2007. (AP)

Zignal Labs reported that the narrative accumulated more than 110,000 mentions online from Oct. 1, 2021, to Dec. 5, 2022. Although that number also included mentions from news organizations and others noting that the claim was false, it also included posts that spread misinformation.

Zignal Labs reported that the first major spike in mentions of the narrative happened after Libs of TikTok, a conservative Twitter account with more than 1.5 million followers, shared a video Jan. 21, 2022, of a woman who claimed she’d heard from someone that a Midland, Michigan, school had provided a litter box for a student who identified as a cat.

In March, a Republican state senator in Nebraska repeated the claim — and he later apologized.)

But the number of litter box claims increased with the midterm election cycle.

In late August, Rep. Marjorie Taylor Greene, R-Ga., talked about it at a rally for former President Donald Trump.

Rogan later walked back his claim: "It doesn’t seem that there’s any proof that they put a litter box in there."

The claims proliferated as schools remained a focal point of culture wars, with activists calling for the removal of books with LGBTQ representation or themes and lawmakers prohibiting instruction on concepts such as sexual orientation and gender identity. 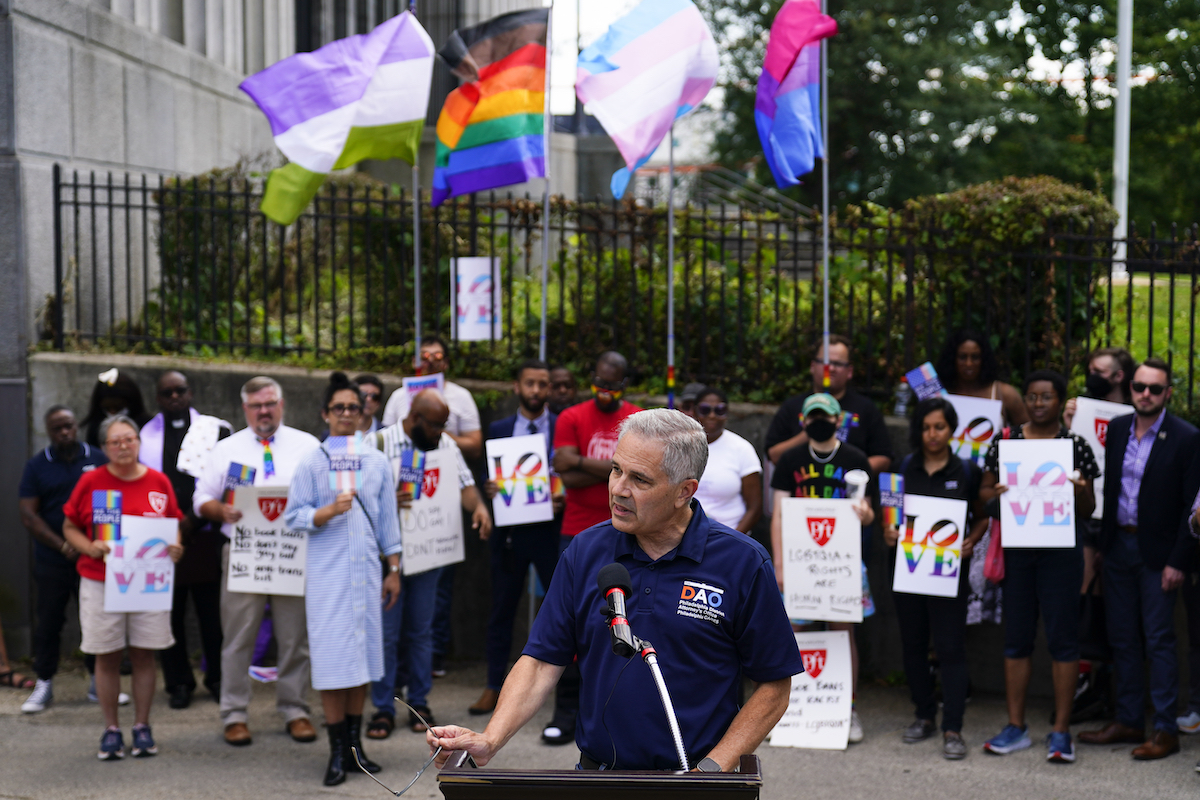 School districts targeted by the litter box hoax have had to issue correction after correction.

In October, NBC News examined litter box claims made by more than 20 conservative political candidates and elected officials and found that every district named by those politicians said the allegations were false.

The outlet found one instance of a school keeping cat litter on campus for student use, but it was part of a "go bucket" of emergency supplies in case students are locked in a classroom for a prolonged time because of a threat.

The claims are meant to "delegitimize the fight for LGBTQ rights and accommodations," said Yotam Ophir, a professor of communication at the State University of New York at Buffalo.

Josie Baker said when she first heard about the claim, she immediately knew it was "transphobic trolling." Baker is executive director of PEERS Alliance PEI, a Canada-based organization providing LGBTQ competency training to public schools.

She said the claims felt like a clear reaction to recent pushes for accommodations for transgender and gender nonconforming students, such as gender-neutral bathrooms in schools.

"It’s that old homophobic trope, which was like, ‘Well, gay marriage? What’s next? Marrying your dog?’" Baker said. "It’s that kind of thing."

Ophir said the litter box falsehood reflects a "dangerous misunderstanding" of both gender identity and the furry community. The narrative could cause people to regard LGBTQ people as unnatural or animalistic, which can result in increased risk of violence to LGBTQ people or harm to the community via laws or regulation that threaten human rights. 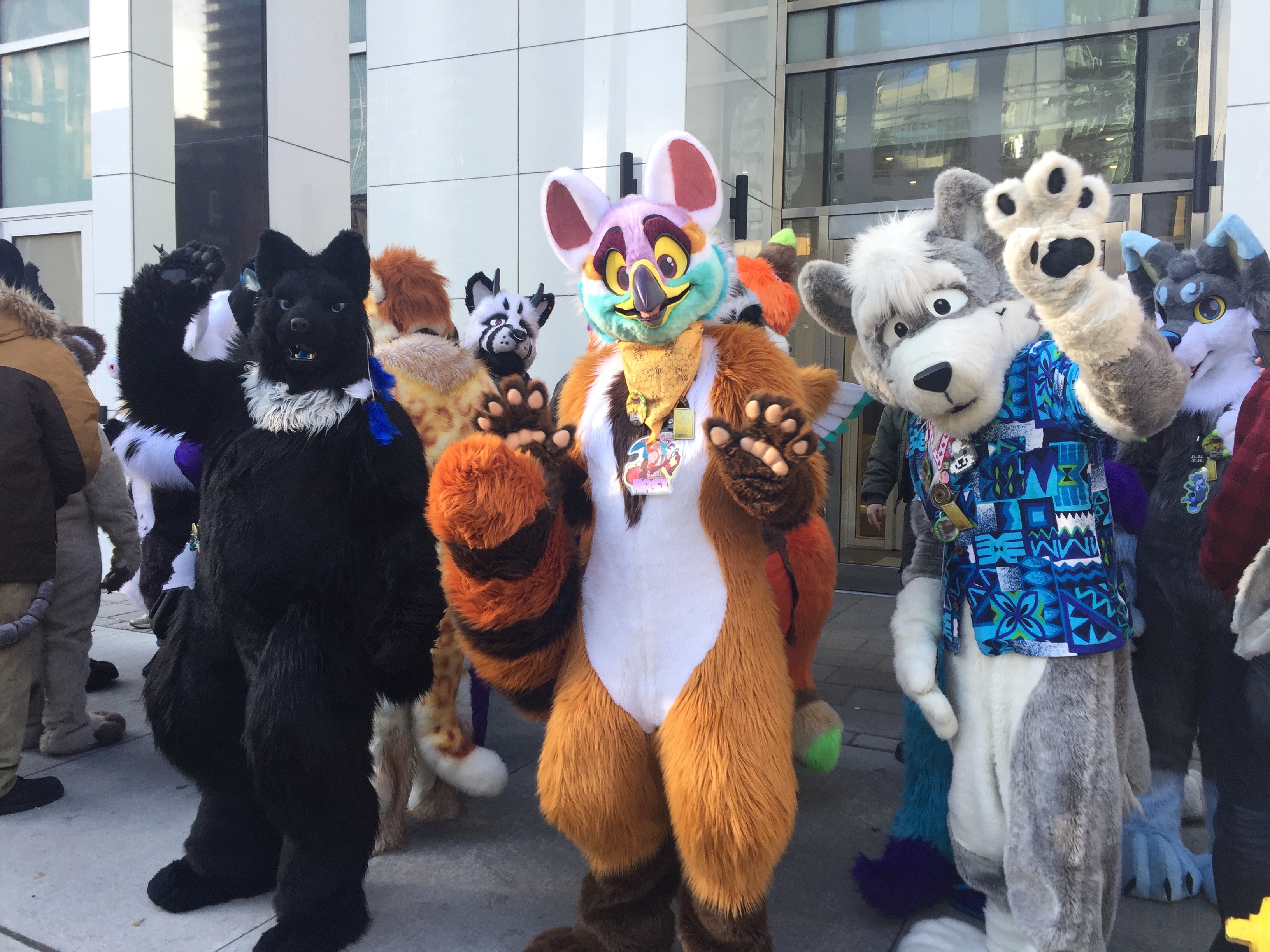 A group of furries pose for a photo at Anthrocon in 2017. Anthrocon is an annual furry convention held in Pittsburgh. (Courtesy of Furscience)

Furries don’t pretend to be animals, said Kameron Dunn, a researcher at the University of Texas at Austin who has studied furries. They are interested in "the genre of animal that walks on two feet and talks like a person."

Being a furry is "not about pretending to be a cat who eats cat food and defecates and pees in a litter box," Dunn said. "The furry fandom is, more than anything, a hobby community for nerdy people. To see it as some sort of pathology or serious, day-in day-out alternative lifestyle is to miss the point entirely."

"Most furries do not identify as animals — they identify with animals," she said. Furries will often create a "fursona" or "a unique, avatarlike representation of self."

And fursona characters and their stories "don’t seem to include bathroom narratives in the same way it seems no one goes to the bathroom on the Enterprise in ‘Star Trek’ or on the Death Star in ‘Star Wars,’" Roberts said.

"Like cosplayers, role players, and fantasy sport fans presumably do, furries take time out from their fantasy activities to go to the bathroom," she added.

RELATED: Why it’s not ‘grooming’: What research says about gender and sexuality in schools

Interview with Meredithe McNamara, assistant professor of pediatrics at the Yale School of Medicine, Dec. 4, 2022

Email interview with Kameron Dunn, doctoral student and researcher at the University of Texas at Austin, Dec. 3, 2022

Email interview with Yotam Ophir, a professor of communication at the University at Buffalo, State University of New York, Dec. 6, 2022

USA Today, Fact check: No, a Michigan public school did not provide litter boxes for students identifying as cats, Jan. 30, 2022

Statesman Journal, Did Salem-Keizer allow a student who identifies as a cat to bring a litter box to school? Sept. 1, 2022

WABI 5, Superintendent denies rumors of litter boxes in restrooms for students who ‘identify as cats,’ Feb. 11, 2022

WILX 10, Midland superintendent: ‘There have never been litter boxes within our schools,’ Jan. 24, 2022

[email protected], Did you hear the rumor about kitty litter boxes for ‘furries’ in public schools? Nov. 4, 2022

The Forum, Are there furries in Fargo-Moorhead schools? Yes, but no litter boxes, April 4, 2022

The Christian Post, Should we provide litter boxes for people who identify as cats?, April 21, 2016

Them, Transphobes are worried schools are installing litterboxes for "furry" students, Jan. 25, 2022

Know Your Meme, I sexually identify as an attack helicopter, accessed Dec. 8, 2022

The Conversation, What are ‘furries?’ Debunking myths about kids identifying as animals, and litter boxes in schools, Nov. 7, 2022

The Babylon Bee, 9 things you should know about the transgender bathroom debate, Feb. 25, 2017

PolitiFact, What is critical race theory, and why are conservatives blocking it? May 24, 2021

Education Week, Who’s behind the escalating push to ban books? A new report has answers, Sept. 19, 2022