A claim about serial numbers on ballots is misguided

Mail-in primary election ballots are processed at the Chester County Voter Services office in West Chester, Pa., on May 28, 2020. (AP)

A Facebook post suggests putting a serial number on every ballot, but many elections experts suggested it would cause more problems than it solves.

The post includes no additional information about the possible rationale for serial numbers on ballots, and the post author didn’t respond to a request for information. But we also saw the same post on a pro-Donald Trump site where a lot of commenters seemed concerned about voter fraud.

The single-sentence post gives the impression that stamping a serial number on every ballot is a simple idea that would presumably solve some type of problem related to ballot tracking or election security, just as the serial numbers on dollar bills help combat counterfeiting.

But this is misleading in a couple of ways. For one thing, election officials already have ways to track ballots to ensure that only legitimate ones are counted. For another, using common serial numbers could compromise a fundamental freedom: the right to a secret ballot.

Ballot secrecy is guaranteed by law in all states. It prevents someone from being able to get hold of your ballot later and know exactly which candidates you voted for.

"If you put a serial number on a ballot that can be traced to a person, you wouldn’t have a secret ballot, which would violate the Georgia constitution," said Ari Schaffer, spokesperson for Georgia Secretary of State Brad Raffensperger.

Mail ballots can be attached to some type of tracking number

City or county officials who run elections do have ways to track ballots to ensure that they are distributed and counted properly.

Many states provide for a unique tracking number for each absentee or mail ballot that is issued, often in the form of a barcode on return mail ballot envelopes, said Jennifer Morrell, a former local elections official in Colorado who now consults on election administration and auditing through The Elections Group.

"This is one of the security features — in addition to verifying a voter's identity via signature or some other requirement — for ensuring a legitimately issued ballot is returned," Morrell said. "It can be especially helpful if a voter loses their mail ballot and asks to have another ballot reissued."

In Pennsylvania, the barcode is printed on the envelope in which a voter returns their mail ballot, said Ellen Lyon, a spokesperson for the Pennsylvania Department of State. When the voted mail ballot is received by the county, staff verify the barcode and unique identifier to log the ballot in the statewide system as having been received — "thus ensuring that only one returned ballot from each qualified voter is counted," Lyon said.

"Counties separate the outer envelopes from the sealed secrecy envelope before the voted ballot is extracted," Lyon added. "This process ensures that the secrecy of the vote is maintained."

Wesley Wilcox, supervisor of elections in Marion County, Florida, and the president of the statewide association of supervisors, said every voter in Florida has a nine-digit identification number. When a voter receives a mail ballot, the voter returns it in an envelope that has that identification number and a barcode. When the completed ballot arrives at the elections office, workers and machines separate the envelopes from the ballots, and a separate group of workers takes the ballots out of their secrecy sleeves. This process protects the ballots’ secrecy, since the workers who see the numbers on the envelopes are separate from the workers who see the completed ballot.

For voters who cast ballots in person, their nine-digit identification number appears in voter registration records — either in an electronic poll book or an actual book. That number isn’t printed on the actual ballot.

With the ID numbers, regardless of where you cast your ballot, election officials can check whether you have already cast a ballot in the same election and make sure you don’t vote twice.

"It’s like an on-off switch," Wilcox said. "We go into elections and everybody’s switch is off, but as soon as you vote, that switch goes on and that will block the return of any other ballot."

In Georgia, a law passed in 2021 requires voters casting absentee ballots to provide identifying information such as a driver’s license number.

The only identifying information on the outer envelope is a barcoded voter ID number to allow elections workers to look up the voter in the registration database, said Joe Sorenson, a spokesperson for Gwinnett County, near Atlanta. The ballot, which is in a separate security envelope with no identifying information, is extracted and separated from the outer ID envelope to protect the privacy of the vote. Once they are separated, there is no way to match the ballot with its ID envelope.

Some ballots have a numbered stub

In our spot check of about a half dozen states, we found a couple that have numbered stubs on ballots, including Alabama, where the author of the Facebook post lives.

Cameron Mixon, a spokesperson for the Alabama Secretary of State, told us that each ballot has a perforated stub which remains with the precinct worker when the voter takes the ballot. The stubs are accounted for after the election.

"The ballot number is not assigned to a voter record whether in-person or absentee voting at any time in the election process," said Mixon. "To do so would remove ballot secrecy and be against the law. So, at no point in the voting process can you tie a specific ballot back to a specific voter."

In Michigan, all ballots regardless of how they’re submitted have a numbered stub. When the completed ballot is received by an election worker, the stub is removed, and the ballot is processed without any information that could link it to a specific voter.

Here is an example from a sample ballot sent to us by Tracy Wimmer, a spokesperson for the Michigan Secretary of State: 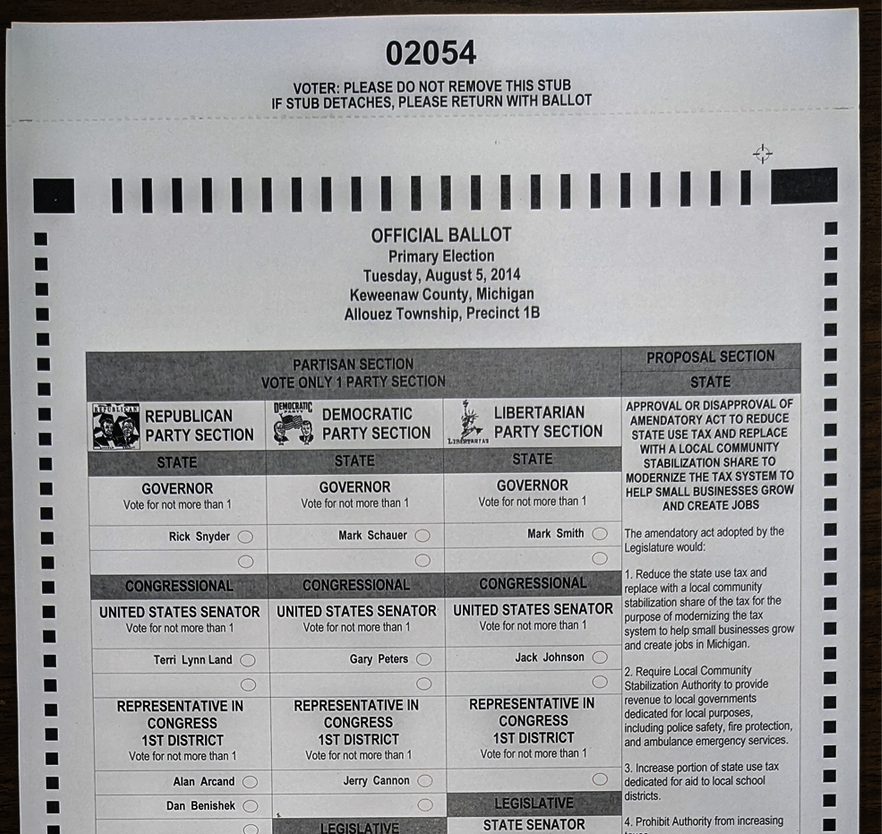 RELATED: What you need to know about the fake Trump electors

RELATED: All of our fact-checks about elections and voting