Then-President Donald Trump speaks during a rally protesting the electoral college certification of Joe Biden as president in Washington on Jan. 6, 2021. (AP)

An obscure portion of the 14th Amendment of the U.S. Constitution says that public officials cannot serve in any future federal, state, or military office if they engaged in "insurrection or rebellion." Would that apply to people who participated in the Jan. 6 attack on Congress?

Some legal experts say the clause could be used against former officeholders — up to and including former President Donald Trump — who supported the events of that day.

In a notable test case, plaintiffs in North Carolina are seeking to apply the clause to GOP Rep. Madison Cawthorn, who spoke at the rally on Jan. 6 just before Trump supporters’ stormed the Capitol. The trespassers temporarily delayed Congress’ official counting of the electoral votes for the 2020 presidential election, which Trump lost to Joe Biden. Observers argue this qualifies as an insurrection.

Here’s some background on the Disqualification Clause and its potential impact this year and beyond.

What does the amendment say?

While the 14th Amendment is best known for enabling African Americans to become citizens of the United States, Section 3  says that no person "shall be a Senator or Representative in Congress, or elector of President and Vice-President, or hold any office, civil or military" who had previously taken an oath to support the Constitution and then "engaged in insurrection or rebellion against the same, or given aid or comfort to the enemies thereof."

The language was included "to prevent current and former U.S. military officers, federal officers and state officials who served the Confederacy from serving again in public office unless their disability was removed by at least a two-thirds vote of each house of Congress," wrote Gerard N. Magliocca, a law professor at Indiana University.

The provision was most frequently applied in the immediate aftermath of the Civil War, but in 1872, Congress granted amnesty to most officials covered by the section, and in 1898, another statute lifted the remaining prohibitions. The provision was rarely invoked in the 20th century.

Is the provision still relevant today?

Despite the long lapse in usage of Section 3, it could still carry weight, experts said.

"I think a court could find a person aided and participated in an attempt to overturn the result of a valid election," said Mark Graber, a University of Maryland law professor. "This is in theory no more difficult than proving persons aided and supported any illegal activity. And I think attempting to overturn an election by violence (qualifies as) an insurrection."

Despite this, the provision may have somewhat limited reach.

For starters, it only applies to former officials who swore an oath, meaning that any rank-and-file participant who stormed the Capitol and who didn’t have any previous government or military service wouldn’t be barred from serving in office.

"I suspect the number of likely candidates who could reasonably be affected by Section 3 is fairly small, though Donald Trump is potentially among them," said Keith Whittington, a Princeton University political scientist.

A potentially larger universe of candidates could be affected if a court construes "a judicial officer" to include lawyers, who are often referred to as "officers of the court" and who all take an oath to defend their state and the federal constitutions when sworn-in, said James Robenalt, lawyer at the firm Thompson Hine.

Another possible limiting factor is that the prospect of a court battle may not be enough to "deter the most ardent Trump supporters who wish to run for office," said Michael J. Gerhardt, a law professor at the University of North Carolina. In fact, Trump allies may find that defending against such charges could be useful to demonstrate their loyalty to the party’s base.

What are the main challenges to leveraging the provision against Jan. 6 participants?

The biggest obstacle to using the Disqualification Clause against a potential candidate is the lack of a mechanism to implement it.

"It is unclear what is required to keep someone out of office," said Brian Kalt, a law professor at Michigan State University. "Some say that Congress would have to pass legislation declaring the insurrection to be covered under the amendment. Others say that a court could find the facts. Still others say that the last word would go to the House in voting whether or not to seat a winning candidate."

The most direct precedent comes from the post-Civil War period, when Congress passed an implementing law. But Republican resistance to labeling the events of Jan. 6 an insurrection could be a major obstacle to passing a new law; at the very least, a new law would be hard-pressed to meet the 60-vote threshold in the Senate to move to a final vote.

Leaving the decision to the courts could be an easier route, but that would take time. "It might take too long to resolve, after the inevitable appeals, to become decisive in the 2022 midterms," Kalt said.

Meanwhile, leaving it to Congress to expel someone would require a two-thirds vote, which is a heavy lift in these polarized times.

"If people were engaged in insurrection or rebellion, I think it much cleaner and better to charge them with federal crimes — especially the seditious conspiracy statute that I’d argue applies directly to Jan. 6," Robenalt said.

Would the events of Jan. 6 qualify as an insurrection?

Whether Jan. 6 qualifies as an insurrection is an open question.

Magliocca, a specialist in the matter, has written that the question of what constitutes an insurrection is "a point on which I have thus far been unable to find any particularly helpful authority. During the 1860s and 1870s, everyone understood that the insurrection in question was the Confederacy, and no thought was given to what other insurrections might look like."

The strongest argument for calling Jan. 6 an insurrection, Magliocca wrote, is that it "was not just a violent attack upon Congress, as bad as that would be. The mob was seeking to halt or overturn a core constitutional function at the seat of government, which can reasonably be described as an attempt to replace law with force."

Still, to prove in court that Jan. 6 amounted to an insurrection "would be a tough row to hoe," said Frank O. Bowman III, a University of Missouri law professor. 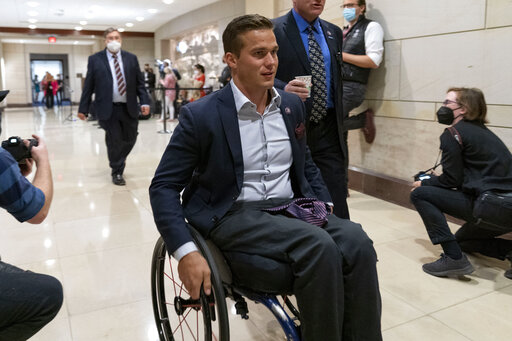 What impact could the case against Cawthorn have?

The suit that seeks to disqualify Cawthorn is a potentially significant test case for the viability of legal challenges under Section 3.

Several voters in Cawthorn’s district and the nonprofit group Free Speech for People cite a North Carolina law that says they may raise a "reasonable suspicion" that a candidate is legally unqualified. They will need to convince the state’s election board that their concerns are reasonable. If so, "the burden of proof will shift to Cawthorn — who must establish, ‘by a preponderance of the evidence,’ that he is eligible" to serve if elected, Magliocca and Bruce Ackerman, a Yale Law School professor, have written.

Since this is new legal territory, experts say it could be an uphill battle to prevent Cawthorn from serving. (The case is being held up temporarily as lawsuits over redistricting in the state take precedence.)

But the case could have other consequences that are problematic for Republicans, namely the discovery process and depositions. While the discovery process "might not keep him out of office, it could implicate others, and move the Jan. 6 investigation forward," said Christopher A. Cooper, a political scientist at Western Carolina University.

It’s important to note, however, that the Cawthorn case is something of a legal unicorn. That’s because North Carolina, rare among states, already has a law on the books that enables plaintiffs to challenge candidacies using the Disqualification Clause.

What could the impact be for Trump?

Since Trump is a former federal official, legal experts say he is at risk for disqualification under the provision. However, it remains to be seen how closely the House’s Jan. 6 committee ties him to the events of the day. Ultimately, Trump could present "the most challenging example" for a successful disqualification, Magliocca wrote.

Trump could argue in court that he’s immune from disqualification either under federal law or the laws of a particular state in which he’s seeking ballot access. "The former president could argue, for instance, that what occurred at the Capitol was not an insurrection, that his role in that event does not mean that he was ‘engaged in insurrection,’ or that the presidency is a unique office that is simply not covered by Section 3," Magliocca wrote.

Gerard Magliocca, "The 14th Amendment’s Disqualification Provision and the Events of Jan. 6," Jan. 19, 2021

Bruce Ackerman and Gerard Magliocca, "Biden vs. Trump: The Makings of a Shattering Constitutional Crisis," Feb. 1, 2022