Russia recognized the independence of two eastern provinces in Ukraine and followed up by sending Russian troops across the Ukrainian border. What Western leaders called a major violation of international law, Russian President Vladimir Putin cast as the end of an erroneous division of land that took place more than a century ago.

"Since time immemorial, the people living in the southwest of what has historically been Russian land have called themselves Russians and Orthodox Christians," Putin said Feb. 21 in a speech justifying Russian recognition of the provinces. "Modern Ukraine was entirely created by Russia or, to be more precise, by Bolshevik, Communist Russia. This process started practically right after the 1917 revolution, and Lenin and his associates did it in a way that was extremely harsh on Russia — by separating, severing what is historically Russian land." 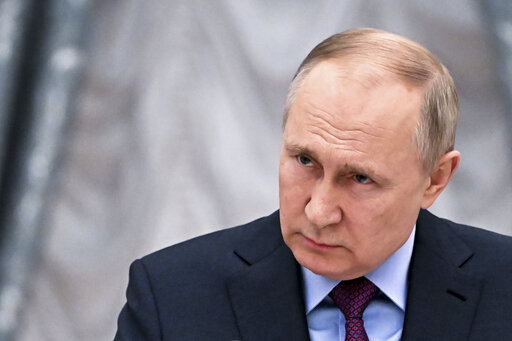 In a few brief lines, Putin oversimplified the sprawling, centuries-long history of the region, papering over the forces that had forged a Ukrainian identity. In reality, Putin’s vision of a single people bound together by a common heritage and religion ignores a lot. It omits both the military force the Russian Empire brought to bear on Ukraine in the 19th century and Ukraine’s often unhappy decades within the Soviet Union in the 20th century.

Putin’s comments "interpret Ukraine as a society without a ‘real’ history, created by the Soviet Union, and existing now only as a puppet of the West," said Erik S. Herron, a West Virginia University political scientist who specializes in studying Eastern Europe.

But Herron said this interpretation is dubious: "Ukrainians have demonstrated a sense of civic identification with Ukraine that has transcended language and ethnicity."

In fact, the territory of contemporary Ukraine "used to belong to several empires or states, so some versions of Ukrainian identity do not even have anything to do with Russia at all," said Eugene Finkel, an associate professor with Johns Hopkins University’s School of Advanced International Studies who studies Eastern Europe.

Ultimately, historians say, the story of Ukraine is not one of uninterrupted Russian brotherhood, but an extended tug-of-war over religion, language and political control.

The roots of Ukrainian identity; divisions and shifting allegiances

In the early 1600s, Ukraine was a group of provinces under the control of Poland. Religious friction was inevitable: Poland was primarily Catholic, while the people in the region of Ukraine were primarily Orthodox. In 1648, a revolt led by the Ukrainian Cossacks broke part of the Ukrainian lands away from Poland.

"Until 1654, Ukrainians and Russians lived in two separate states," said Frank Sysyn, historian and director of the Toronto office of the Canadian Institute of Ukrainian Studies of the University of Alberta. "For almost 400 years, from the 13th to the 17th centuries, they were not in the same political structure and lived under different religious influences."

Not all scholars agree, but some see Ukrainian peasants as central to the development of Ukraine.

"Ukrainian identity initially revolved around peasant culture and was defined against Polish nobles, who remained a dominant regional force, and Jews, whom peasants saw as both national and class enemies," said Faith Hillis, a historian at the University of Chicago and author of "Children of Rus’: Right-Bank Ukraine and the Invention of a Russian Nation."

Resistance to Polish domination came from the Cossacks, a group with historically opaque ethnic origins. In 1654, they allied with Russia to establish a territory under their control, called a Hetmanate; it was an early form of what would become Ukraine, and it included Ukraine’s modern-day capital, Kyiv. Mapmakers of that time labeled Cossack areas as Ukraine. 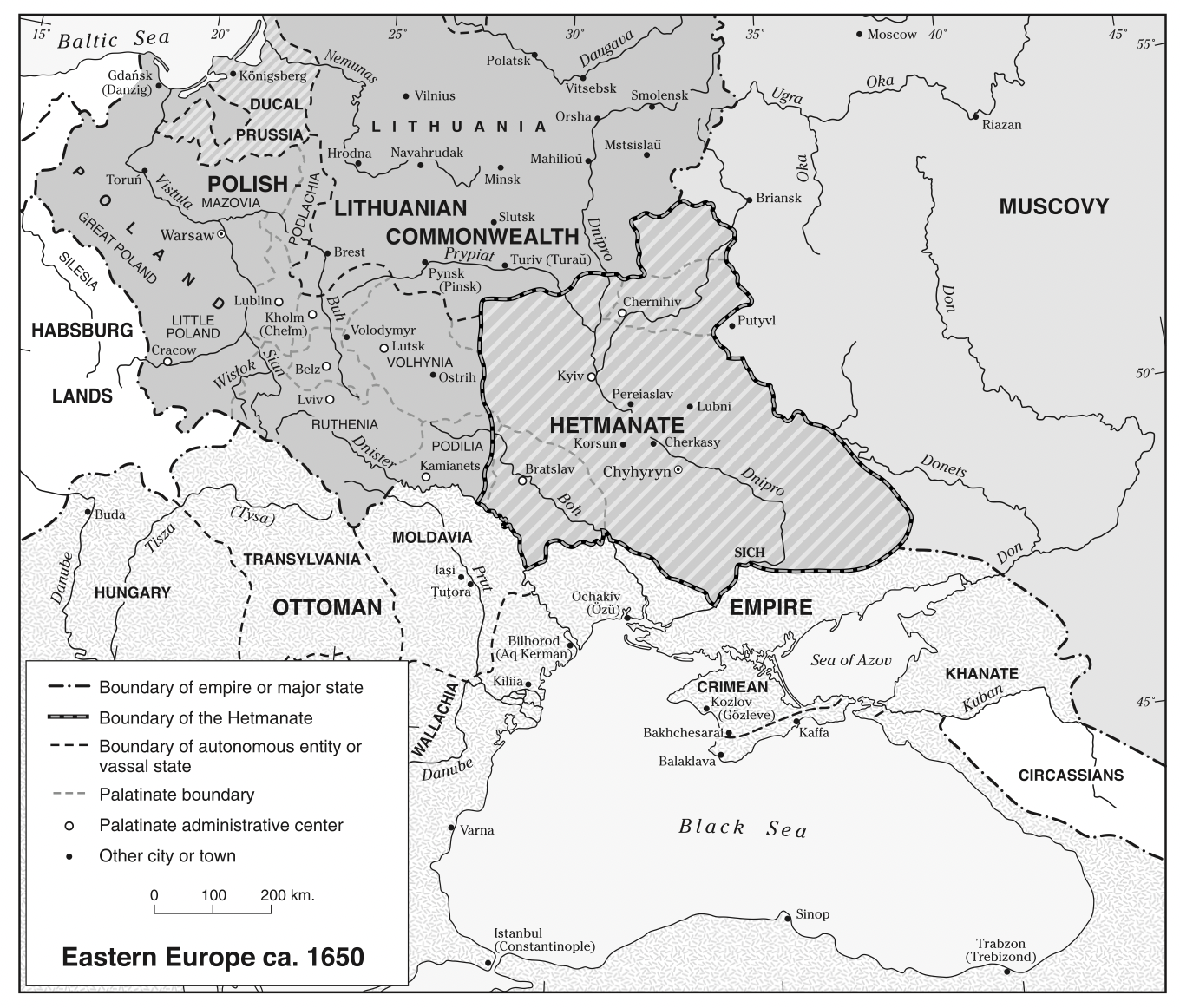 (Used with permission by the Canadian Institute of Ukrainian Studies)

In his speech, Putin spoke of a region bound together by Russian identity and shared religion. However, the Cossack history suggests that alignments shifted over time.

"They saw themselves as separate from the Muscovy state," said Rutgers University political scientist Alexander Motyl. (Muscovy was the core of what became the Russian Empire.)

To counter the Poles, the Cossacks relied on Russian leaders like Tsar Peter the Great.

After 1654, the Poles were less of a concern to the Cossacks, but independence remained a key goal. In 1708, when the Swedish army sought to push the Russians out of Ukraine, Ivan Mazepa, a Cossack leader, joined with the Swedes. The Russians routed their opponents, hobbling an independent Cossack state from that point forward.

The Cossack influence in Ukraine lives on today in the word for Ukraine’s parliament (rada) and square (maidan), which are Cossack in origin, said Richard Arnold, a political scientist at Muskingum University and author of "Russian Nationalism and Ethnic Violence: Symbolic Violence, Lynching, Pogrom, and Massacre." 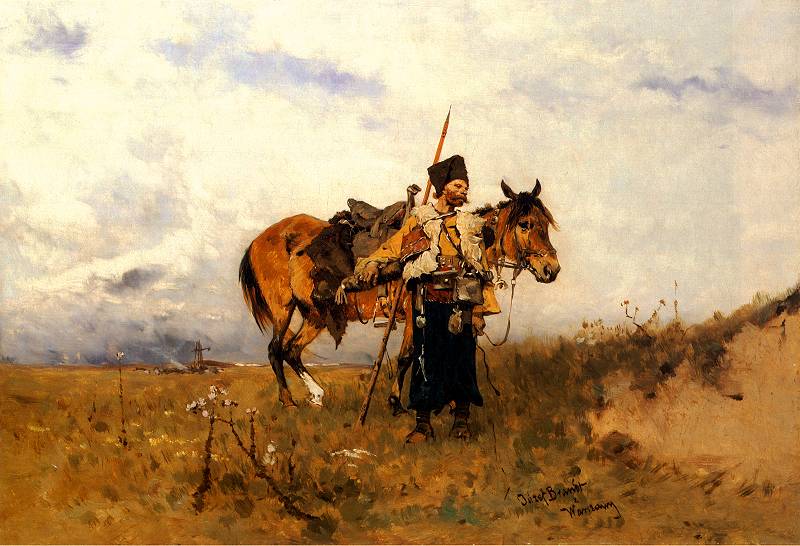 The Ukrainians under multiple empires

Ukraine became a region divided by competing empires. The western provinces, initially under Polish dominion, were later governed by the Austro-Hungarian Empire. By the mid-19th century, the bulk of Ukrainian territory operated under Russian rule.

That rule could be harsh, and a sense of grievance began to foster a Ukrainian national identity. The Ukrainian language had taken shape over centuries. By the 1800s, a standard form had emerged.

The people of Ukraine shared "a common language, from east to west," said Sysyn, the Canadian historian. "They begin to think of all the Ukrainian lands as a common space or country with its own traditions."

The idea of a dominant Russian identity began to give way to a more nuanced mosaic of related people.

"Ukrainian authors began to voice the opinion that various ‘Russians’ not only spoke different languages but also belonged to different ethnic groups," Harvard historian Serhii Plokhy wrote in the book, "The Frontline: Essays on Ukraine's Past and Present."

By the mid-1800s, these writers began to publish Ukrainian primers and expand the teaching of the language in schools.

That went too far for Ukraine’s Russian overseers. In 1876, imperial officials ordered the removal of Ukrainian books from schools. They also replaced teachers and banned the Ukrainian language in plays and entertainment.

The breakdown of the Tsarist empire and the Bolshevik Revolution in 1917 proved to be a key turning point for Ukraine.

Ukraine declared independence in 1918 and maintained that status until 1921, Motyl said.

Even so, it was a tumultuous period, with the government in Kyiv changing hands five times in 1919 alone. The Bolsheviks took advantage of the turmoil, focusing their attention on undermining Ukrainian national sentiment.

"When they seized Kyiv in early 1918, they targeted sites that were part of Ukrainian identity," Sysyn said. "They shelled the Ukrainian museum established by the head of the Ukrainian state, Mykhailo Hrushevsky. People caught speaking Ukrainian on the streets of Kyiv were shot."

The independent government in Kyiv had claimed the eastern provinces as part of the new nation, but this spawned its own tensions. Although the Donbas region was majority Ukrainian, "many ethnic Russians had moved in," Sysyn said. There was an effort to set up a separate pro-Russian Donetsk–Krivoy Rog Soviet Republic, which presaged the struggle a century later in the eastern portions of Ukraine.

Facing pressure from a Ukrainian guerilla resistance, Vladimir Lenin and Joseph Stalin agreed to create a Ukrainian entity under the Soviet Union in 1922. Ukraine had some jurisdiction over its domestic affairs, but foreign policy, defense and commerce were in the hands of Moscow.

After a period in which Ukrainian language and culture were supported in the 1920s, the Soviet state under Stalin took on a more centralized and Russian tone, accompanied by greater repression. The longer Ukraine was part of the Soviet Union, the more its antagonism toward Russia grew.

Ukrainians shared a sense of victimhood at the hands of both the Soviet Union and Russia, Herron said. Key events include the famine (or Holodomor) under Stalin that killed perhaps 4 million or more Ukrainians, as well as the 1986 nuclear disaster in Chernobyl (or, to the Ukrainians, Chornobyl), which occurred about 60 miles north of Kyiv.

"The Holodomor is one of the most substantive narratives in present-day Ukraine and there are monuments to its victims in Kyiv," said Arnold, the Muskingum University political scientist. 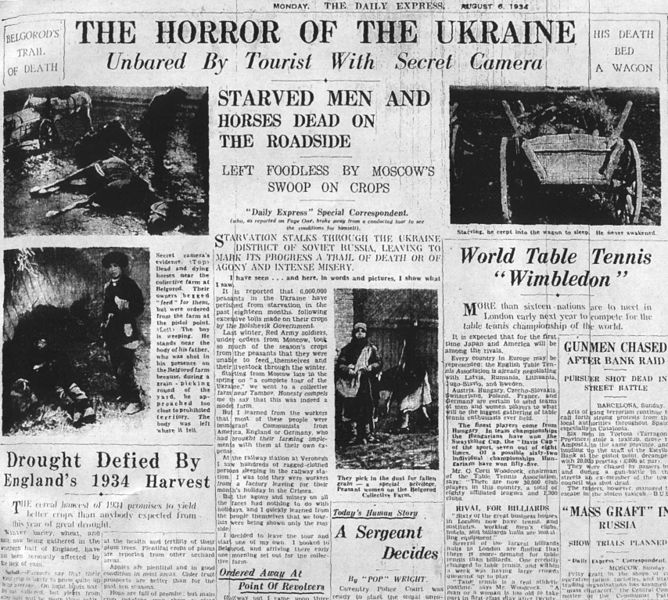 Newspaper coverage of the Holodomor on Aug. 6, 1934 (public domain)

This is not to say that Ukrainians have expressed only aversion to Russia; for many, the relationship was complicated.

"Ukrainians have played crucial roles in Russian history, from the founding of the Russian empire (Peter the Great’s ideologist, Feofan Prokopovych, was from Ukraine) to the creation of the Soviet Union (Leon Trotsky and Leonid Brezhnev came from Ukraine)," Hillis said.

Finkel said that the Soviet identity did carry some weight for some Ukrainians, comparing it to how American Jews may simultaneously feel Jewish and American in different contexts.

But the Soviet Union is gone – and in the post-Soviet era, Ukrainian sentiment has only continued to sour on Russia, especially after its occupation of Crimea in 2014 and subsequent annexation.

Positive feelings among Ukrainians toward Russia exceeded 90% in 2010, but fell to about 30% by 2014, when Crimea was seized, according to polling data from the Kyiv International Institute of Sociology. This figure climbed back to the high 50s by 2019, but sank below 40% in the most recent survey, in November 2021.

This shift has been exacerbated by the reality that many of the more pro-Russian Ukrainians have moved away or died of old age.

"Putin’s error comes in his insistence on transforming a complex, entangled history between the two countries into a simplistic morality tale that serves his own interests," Hillis said.

Johns Hopkins University Project Muse, How a War for the Past Becomes a War in the Present, Winter 2015

Email interview with Faith Hillis, historian at the University of Chicago, Feb. 22, 2022