Russia’s economy and Western sanctions: What you need to know

The Sheskharis oil shipment terminal in Novorossiisk in southern Russia in 2015. (AP)

The Russian invasion of Ukraine, and the sanctions unleashed against Russia, are expected to destabilize the world economy. But how important is Russia within the global economy?

While casting a large geopolitical shadow as a nuclear-armed power, economically, Russia is a mid-level player. Still, it’s big in oil and natural gas exports, so any disruptions from Russia’s invasion and the resulting sanctions are expected to squeeze countries that are especially dependent on energy from Russia, notably a range of countries in Western Europe.

"Germany and the U.K. are the key players, because of energy and financial markets," said Susanne Wengle, a University of Notre Dame political scientist. Germany is important because of its blockage of the Nord Stream 2 pipeline, while the U.K. has financial markets that are important for many Russian oligarchs.

How big is the Russian economy?

In the big picture, Russia is not in the top tier of global economic powers.

Measured by gross domestic product, the most common yardstick for measuring a country’s economic footprint, Russia ranks 11th in the world, and it’s roughly one-fourteenth the size of the United States’ economy, the world’s biggest. 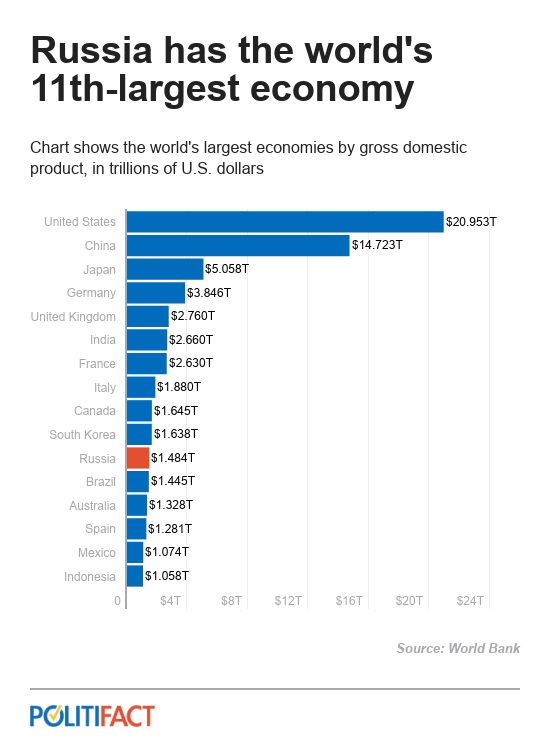 Russia is also a relatively poor country when considering its large population of roughly 145 million. More than two dozen nations have a higher gross domestic product per capita. In fact, several former Cold War satellite states of the Soviet Union have now surpassed Russia in GDP per capita, including Poland, Hungary the Czech Republic and Slovakia.

Russia is also a relatively small player in overall international trade. It ranks 20th in the world for exports in goods and services, trailing smaller countries such as the Netherlands, Ireland, Switzerland, Belgium, Spain and the United Arab Emirates, as well as the Asian trade hubs of Singapore and Hong Kong. 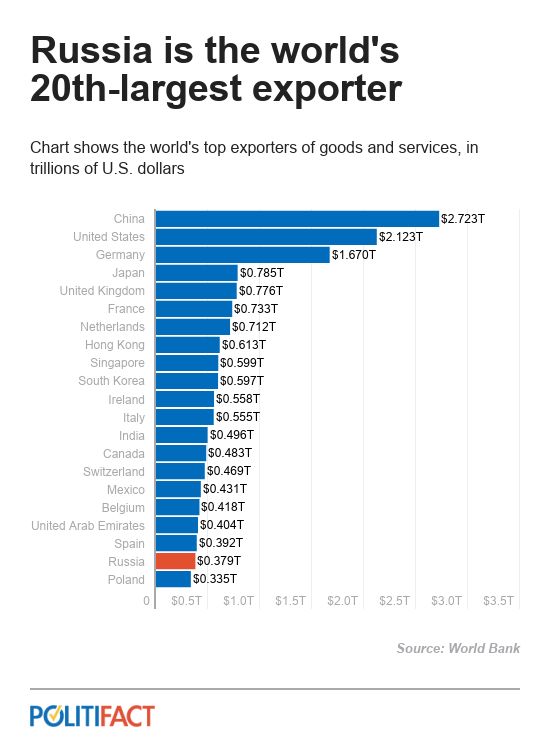 Where can Russia throw its weight around economically?

That said, Russia is a key economic cog in one area: energy, particularly in oil and natural gas.

"Russia's economic importance stems in great part from its status as an energy producer," said Nina Quinn Eichacker, an economist at the University of Rhode Island. "Four of its top five exports are fossil fuel related: petroleum, petroleum products, natural gas, and coal."

For the United States, losing imports of Russian oil would have only a modest impact: Russian oil accounts for only about 7% of U.S. imports, a share far exceeded by the roughly 62% that comes from its North American neighbors, Canada and Mexico.

And U.S. dependence on foreign oil is currently at a historical low ebb to start with. For much of 2020 and 2021, U.S. domestic production exceeded its imports. (The U.S. supplies most of its own natural gas as well.)

But on the international oil and gas markets, other countries would be much harder hit if they cut back on or give up on Russian oil to punish Putin’s aggression. The Netherlands, Germany, Poland and Finland, among other European nations, have been relying heavily on Russian oil, and will now face pressure to buy elsewhere. China also buys a large share of Russian oil exports and would probably be less driven to cut its purchases.

While China could offer a general workaround for Russian economic needs, it’s still unclear how much China will be willing to prop up its neighbor.

"The difficulty that Germany and other European powers faced in deciding how to respond to its buildup of troops owed much to their reliance on Russian gas and oil," Eichacker said. "Any country with cold winters that relies on Russian fuel for heating will be affected."

Replacing Russian gas "will be extremely difficult and, in the extreme event of a total cutoff, would require non-market policy tools and cooperation between the United States, the European Union, and our Asian allies as consumers, and from producers such as Qatar," said Anna Mikulska, a fellow in energy studies at Rice University’s Baker Institute for Public Policy.

While Europe will bear the most direct burdens, she added, there could be follow-on effects for the rest of the world due to the overall supply contraction.

Other areas in which Russia has economic leverage

Beyond energy, Russia is also a world player in wheat. It ranks first in the world in wheat exports, and Ukraine, which it could soon control, ranks fifth.

"Russia’s agricultural exports end up in over 100 countries, with the largest shares going to populous countries in the Middle East, Asia and Africa, including Egypt, Turkey, Nigeria, and Bangladesh," Wengle said.

This means that interruptions have the potential to cause domestic unrest in a range of countries, Wengle said. There’s a historical precedent, she said: "A drought in Russia in 2010 contributed to rising food prices in Egypt, which contributed to popular discontent."

Russia is also an important producer of certain commodities, including palladium, nickel, aluminum, and potash. "Sanctions on those sectors, on major firms, and on the mechanics of exports, such as railways and insurance, can certainly destabilize the international economy," said Yuval Weber, a professor at Texas A&M University's Bush School of Government and Public Service in Washington.

While the United States is expected to suffer less immediate economic impact than many European countries, there will be some. A continued rise in gas prices is the most likely, at least to start, as buyers begin to forgo Russian oil and until additional supply from other producers kicks in. High prices at the pump will be politically painful as well.

"This will be problematic for the Biden administration, as it would be for every administration facing this situation, since voters, and the opposition party, usually blame the administration for high prices at the pump, even though the prices are based on global and not domestic factors," Mikulska said.

The most likely approach for the U.S. and the West is to jawbone other countries to increase oil production, although whether this will be successful remains an "open question," Eichacker said. The U.S. may even attempt to kick-start negotiations with Iran so more of its oil can come to market. On natural gas, Qatar is being eyed as a possible replacement source for European countries, through liquefied natural gas shipments.

Beyond energy, some consumer products could also be affected, possibly worsening the already difficult situation for the global supply chain, Weber said. But these impacts will not be as immediately obvious as energy prices, experts say.

How effective could sanctions be?

The West has not yet exhausted its tools for causing Russia economic strain, including the potential for kicking it out of the international banking program known as SWIFT. The consortium, based in Belgium, carries tens of millions of financial messages between banks per day, easing cross-border payments.

Kicking Russia off the platform would hamper its ability to connect with the rest of the world’s economies, although the West has so far moved cautiously before taking this step, in part fearing blowback on their own economies.

"If the West collectively decided upon it, its leaders could collapse the Russian economy pretty quickly," Weber said. Instead, he said, "the limits are political. What are the off-ramps they want to leave President Putin? What might be his reaction to sanctions that would sooner, rather than later, bankrupt the state and potentially trigger a leadership challenge?"

Energy Information Administration, "What countries are the top producers and consumers of oil?" accessed Feb. 24, 2022