Russia’s invasion of Ukraine is especially lawless. Could Putin be tried for war crimes?

A woman walks past the debris in the aftermath of Russian shelling in Mariupol, Ukraine, on Feb. 24, 2022. (AP)

Russia’s invasion of Ukraine has flouted international law more dramatically than almost any other military incursion since the end of World War II.

Prior to the invasion, Ukraine had been a sovereign nation, recognized around the world for some three decades, and it had made no militaristic moves against Russia. Yet Russia’s president, Vladimir Putin, assembled Russian military forces on three sides of Ukraine and, on Feb. 24, sent them across the border to fight its far smaller and less equipped neighbor.

In the days since, Ukrainians have resisted more successfully than many had expected, but they have still suffered losses. Reports of civilian casualties have multiplied. On March 1, Ukrainian President Volodymyr Zelensky cited air strikes on an opera house, concert hall and government offices in Kharkiv as examples of war crimes.

Wars have occurred sporadically in recent decades, but few have inspired the immediate closing of the ranks by advanced industrialized countries, including significant sanctions on international banking and finance.

Why is the revulsion over Russia’s invasion of Ukraine different from other post-World War II invasions? And could Putin be personally at risk under international law?

We asked experts in foreign policy, military history, and international law for answers. Here’s what we found.

How does the Russian invasion compare with historical precedents?

Prior to World War II, it was common for one country to attack another with little or no provocation. This included European powers’ invasions of parts of Africa, the Americas, or Asia for the purpose of colonization. It also included the spark that set off World War II: the simultaneous invasions of Poland by Nazi Germany and the Soviet Union in September 1939.

After the end of World War II, the victorious powers established a set of institutions to prevent future wars, including the United Nations. The U.N., undergirded by international laws on such matters as genocide and inhumane methods of war, was empowered to bless military action that comported with agreed-upon standards while punishing wars that infringed upon national sovereignty and basic human rights.

These rules and practices have worked imperfectly.

In the past 75 years, the Soviet Union sought to topple or protect the leadership of a sovereign country several times: in Hungary in 1956, Czechoslovakia in 1968, and Afghanistan in 1979. These did not pass muster as "legitimate" wars with the United Nations, but they went ahead anyway, because the nuclear-armed invader was too powerful to stop.

Elsewhere, countries have undertaken military takeovers of discrete portions of another country, including the Falklands War between the United Kingdom and Argentina in 1982, and various wars between Israel and its neighbors.

The United States has not been immune from mounting military actions of dubious legitimacy under international law. For instance, "just about every U.S. intervention in the Western hemisphere since World War II" could qualify as problematic, said David Silbey, a Cornell University historian. That includes interventions in Guatemala in 1954, Dominican Republic in 1965, and Panama in 1989.

And to justify the U.S. invasion of Iraq in 2003, President George W. Bush articulated a "doctrine of preemption." He asserted that a first strike is justified if it’s intended to wipe out a theoretical threat. However, legal experts considered this justification questionable.

Despite these examples, the post-World War II international structures have curbed the most naked forms of aggression to a significant degree. (Because terrorist attacks are usually carried out by non-state actors, they have been more difficult to prevent.)

The attack on Ukraine stands out as an unusually stark violation of the rules of the post-World War II era.

The invasion of Ukraine "seems to be an extremely clear violation of Article 2, Paragraph 4 of the United Nations Charter," said Anthony Clark Arend, a professor of government and foreign service at Georgetown University. This section of the charter says that "all members shall refrain … from the threat or use of force against the territorial integrity or political independence of any state."

Probably the single closest analogue to Russia’s current invasion during the post-World War II period is Iraq’s invasion of Kuwait in 1990, led by Saddam Hussein. In a swift maneuver, Iraqi troops invaded and occupied its neighbor to the southeast, prompting a nearly unified international response, including both diplomatic and military elements. WIth the U.N.’s approval, a broad coalition led by the United States pushed Iraqi forces out of Kuwait and imposed continuing restrictions on Iraq’s military operations. 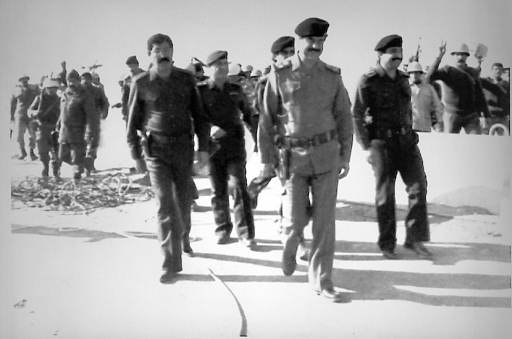 Then-Iraqi President Saddam Hussein and aides tour the front line in Kuwait on Jan. 16, 1991, one day before a United Nations deadline to withdraw his troops. (AP)

What makes the invasions by Hussein and Putin similar is that they targeted a sovereign neighbor that had not threatened them militarily, and their presumed endgame in both cases was full-scale annexation.

"Saddam Hussein had sought to justify the invasion by saying that Kuwait was Iraq’s 19th province, while Putin has hinted at wanting to ‘restore’ Russian or Soviet borders and questioned the legitimacy of Ukraine as a state," said Tanisha M. Fazal, a University of Minnesota political scientist.

Another notable difference with the invasion of Ukraine has more to do with cultural issues. The current invasion involves a European power invading a country that is predominantly white. Past invasions of African, Latin American and Asian countries have often failed to inspire the same degree of global outrage in the West, and some wonder whether racist attitudes were at play.

"Sadly there’s a feeling that wars in or against non-Western countries are seen as somehow ‘outside’ of the civilized framework, and thus don’t count," Silbey said. "This has echoes of the colonialist and racialist mindset that justified the global empires of the 19th century."

What legal risk is Putin taking on by invading Ukraine?

The fighting in Ukraine has barely begun, so we don’t know the full picture of what Putin has ordered, or will eventually order.

The International Criminal Court, which brings war crime charges against individuals, clarified its definition of the crime of aggression in 2010, saying that "the planning, preparation, initiation or execution" of an act of aggression by a person with the ability to "control" or "direct the political or military action of a state" would qualify as a "manifest violation" of the U.N. Charter.

In addition to potentially facing the consequences of instigating a war of aggression, Putin could be held accountable for violations of international law that govern which military actions are acceptable and which ones are not.

"If Russia were proven to target civilians deliberately or commit other violations of international law, then Putin should worry about charges," Fazal said. The use of certain banned weapons could also pose a legal risk.

But even if prosecutors are able to make credible war crimes charges against Putin, the practicalities of actually trying him for war crimes are far less certain.

For starters, Putin will enjoy immunity from being tried for war crimes as long as he remains in office, Arend said. And even after he leaves office, a successful prosecution would not be assured.

Another potential route would be a U.N. Security Council referral to the International Criminal Court. However, Russia could block that with its veto at the Security Council, and even a successor government in Russia might balk at handing Putin over for prosecution.

Ironically, previous decisions by the U.S. and other Western nations to intervene militarily in other countries, including the United States in Iraq and Syria, is helping provide a legal fig-leaf for Russia in Ukraine, Ingrid Wuerth, a professor of international law at Vanderbilt University, wrote recently.

"Russia’s self-defense arguments are laughably weak," Wuerth wrote. "More generally, Russia’s reliance on all of these precedents is self-serving, lacking in factual basis and ‘morally corrupt.’ Russia is correct, however, to argue that other powerful countries have undermined international law’s prohibition on the use of force and protections of territorial integrity — even if that argument goes nowhere in terms of a legal or moral justification for Russia’s own actions."

Brookings Institution, "The Preemptive-War Doctrine has Met an Early Death in Iraq," May 30, 2004

Harvard International Law Journal, "The Crime of Aggression Under the Rome Statute and Implications for Corporate Accountability," April 2017

International Criminal Court, "Statement of ICC Prosecutor, Karim A.A. Khan QC, on the Situation in Ukraine: 'I have decided to proceed with opening an investigation,'" Feb. 28, 2022