In the wake of a mass shooting at a Buffalo supermarket, U.S. Rep. Elise Stefanik, R-N.Y., is facing criticism for ads that echo the "great replacement theory'' referenced by the man charged in the attack. The baseless conspiracy theory holds that Democrats and elites are trying to replace white people with non-white immigrants.

Stefanik, who chairs the House Republican Conference and is the third-highest ranking House Republican, ran a series of Facebook ads last fall that warned of a "permanent election insurrection," arguing that Democrats want to grant amnesty to millions of illegal immigrants and "overthrow our current electorate."

After Stefanik expressed her sorrow on Twitter about the shooting, critics, legislators and news articles resurfaced those ads.

Without naming names, U.S. Rep. Liz Cheney, R-Wyo., tweeted, "The House GOP leadership has enabled white nationalism, white supremacy, and anti-semitism." Cheney was replaced by Stefanik last year in the party’s House leadership ranks after being forced out in May over her criticism of former President Donald Trump.

Rep. Adam Kinzinger of Illinois, another Republican who broke with Trump, criticized Stefanik and other lawmakers for pushing "white replacement theory," linking to a Newsweek article from September 2021 about her Facebook ads and a critical editorial from Stefanik’s hometown newspaper. The editorial board of the Albany Times Union wrote that the "Harvard-educated Ms. Stefanik surely knows the sordid history and context" of the language used in the ads.

Stefanik is not the only conservative facing criticism for echoing the theory. Some social media users recalled that Ohio Republican Senate candidate J.D. Vance made a similar argument, using the word "invasion" in this interview with Fox News host Tucker Carlson, who the New York Times wrote has "relentlessly" promoted the theory. When Vance ran a TV ad that said Biden’s "open border" means that there are "more Democrat voters pouring into this country," PolitiFact rated his claim False.

U.S. Rep. Matt Gaetz of Florida, Texas Lt. Gov. Dan Patrick and others have also been accused of pushing the theory.

Stefanik and others argue the language in her ads is different from "great replacement theory" rhetoric: It shows her opposition to amnesty for immigrants who enter the country illegally, which would change voting patterns in the U.S.

We wanted to lay out what the ads said and what experts thought of her rhetoric.

The ads were launched in August and September, according to Facebook’s Ad Library. There are about two dozen ads about immigration and voting shown there, each using similar wording or imagery.

"Radical Democrats are planning their most aggressive move yet: a PERMANENT ELECTION INSURRECTION. Their plan to grant amnesty to 11 MILLION illegal immigrants will overthrow our current electorate and create a permanent liberal majority in Washington" read one ad that features a closeup of Joe Biden, wearing sunglasses, and a text overlay that read, "Stop election insurrection."

Another featured an image of crowds of people outside a border wall at a beach, and read, "Joe Biden, Kamala Harris, and Nancy Pelosi are attempting to flood our voter roles (sic) with 11 MILLION NEW VOTERS by giving illegal immigrants amnesty." 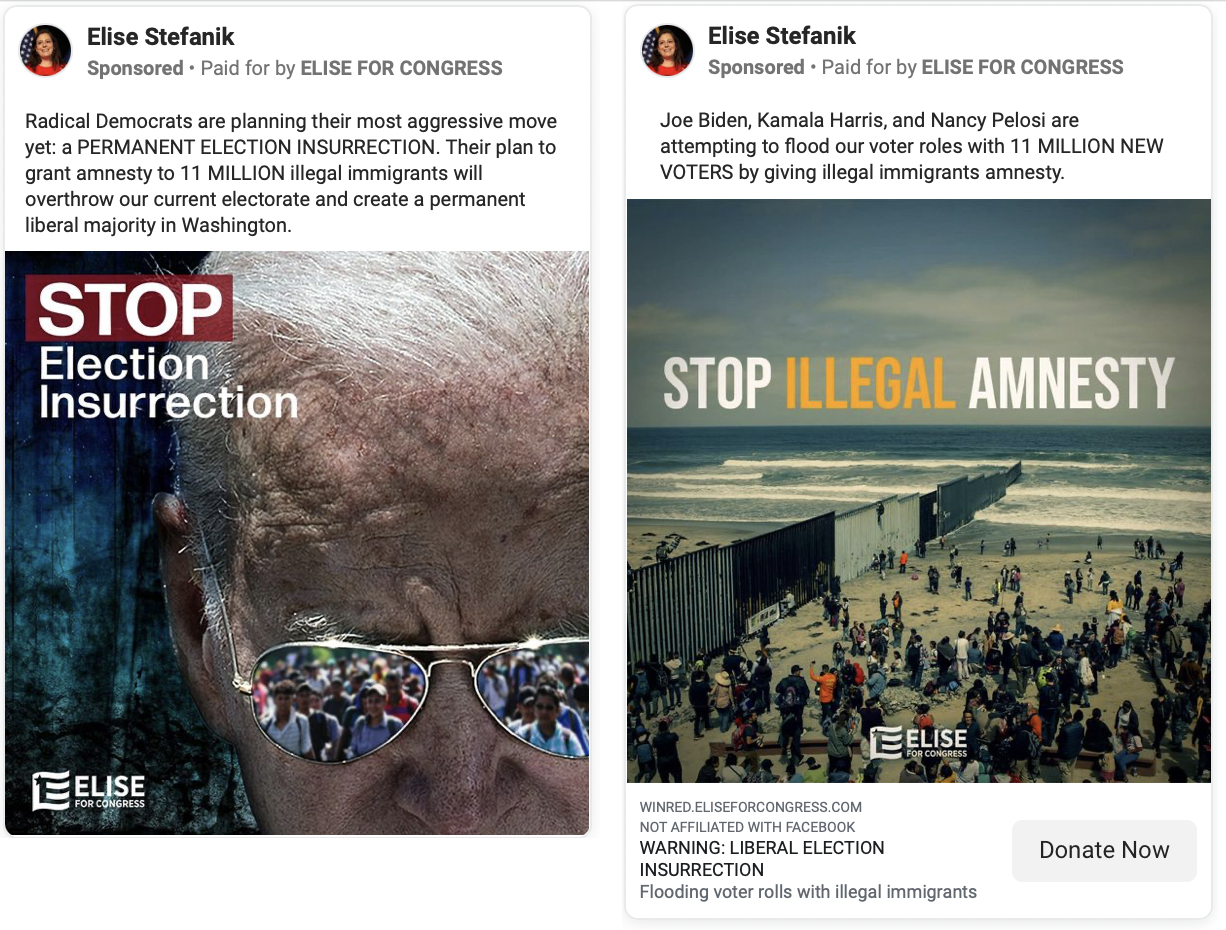 Above are screenshots from Facebook's ad library of two of the ads about immigration that ran in the fall of 2021.

Stefanik’s ads mislead on a couple levels. In a fact-check of a similar claim by Arizona Republican candidate Blake Masters, PolitiFact reported that it would take eight years under the latest Democratic proposal for 11 million immigrants granted amnesty to become U.S. citizens, a step required to vote. That proposal would require 60 votes in the evenly divided U.S. Senate to become law.

In addition, there’s no guarantee that immigrants would vote Democratic. Last year, 56% of Latino voters identified as Democratic or leaning Democratic, but one polling firm found that Trump made gains among Hispanics, especially in states like Florida and Texas. Turnout among Latino groups in 2020 was also lower than others, according to the Latino Data Project.

What the experts say

Stefanik defended the ads in a statement on May 16 that referenced "dangerous media smears." She doubled down on her position in subsequent tweets. In one, Stefanik wrote that "It is a FACT that DEMOCRATS have been explicitly pushing for amnesty for years — specifically for political and electoral purposes." In another, she wrote that Republicans want to "protect election integrity."

Jared Holt, resident fellow at The Atlantic Council’s Digital Forensic Research Lab, said her response struck him as "an attempt to split hairs where there are few."

"Though they do not explicitly invoke the racial and antisemitic rhetoric such conspiracy theories carry with them, the undertones present are not subtle. Suggesting that Democrats are designing immigration policy to 'overthrow our current electorate' is thinly veiled at best," Holt said. "The use of 'insurrection' rhetoric adds an additional layer of concern. Though the ads do not contain a full-throated version of the theory, the core theme on display is practically identical."

Holt said the ads advance the notion that "immigrants are an ‘other’" and "that a plot is underway to replace Americans" with them.

"Hyperbolic language like this has motivated extremist movements for decades and inspired horrific acts of violence, particularly in recent years in El Paso and Christchurch, just to name a couple incidents," Holt said.

Oren Segal, vice president of the Anti-Defamation League’s Center on Extremism, said the type of "great replacement theory" that "explicitly features racism and anti-Semitism" has been embraced by white supremacists and has led to violence.

But there’s a second form, espoused by Fox’s Carlson, which Segal described as "adjacent narratives" that are "presented as political." These often try to define "real" Americans and traditional values, he said.

"Both versions, if you will, of ‘great replacement’ are harmful. They're toxic, they fundamentally undermine values of diversity in this country," said Segal, who added that Stefanik’s ads "are perhaps more aligned with the second type."

"I think at a time when we have seen this theory animate so much violence, not just in the United States but around the world, you can understand why people's antennas would be up," Segal said.

RELATED: What is the ‘great replacement theory’ linked to the Buffalo shooter?

Phone interview with Oren Segal, vice president of the Anti-Defamation League’s Center on Extremism, May 16, 2022