A brief history of Senate illness and recovery, and what it means for John Fetterman

• In recent years, numerous senators have experienced strokes, significant battles with cancer or neurological deterioration. As incumbents, many of these lawmakers were able to take time off, recover and return to work, or arrange their daily lives to accommodate their limitations.

• But Fetterman is not currently a senator; he must first convince voters that he’s capable of doing the job at the same time he’s trying to make a medical recovery.

The issue of a candidate’s health is always sensitive, and we won’t attempt to determine how capable Fetterman would be to serve in the Senate if he wins the Nov. 8 election.

We wanted to examine how similar health issues have played out for prior senators, and to compare these examples with Fetterman’s case.

In the recent past, when sitting senators experienced health crises, they would take time off to recover fully, have staff run the office in their absence, sign paperwork and provide guidance during their recovery. Then they would return to the chamber, once they were ready.

But Fetterman’s stroke occurred as he was seeking office. Pursuing recovery full time could have been an option for him, but it almost certainly would have required giving up his candidacy.

An incumbent "cannot be forced from office and usually has a chance to prove their value, while a candidate must make the case with voters," said Steven Smith, a political scientist and Senate specialist at Washington University in St. Louis.

Recent senators who had significant health issues while in office

In recent years, at least four senators have experienced strokes or cerebral hemorrhages while in office. They each took time off work to recover.

• Tim Johnson, D-S.D. In 2007, Johnson experienced a cerebral hemorrhage during a meeting. He withdrew from the Senate’s daily business for more than eight months before returning in a motorized wheelchair.

"Much of his right side remains partially paralyzed," Politico reported upon his return to the Capitol. "He shakes hands with his left hand and is learning to write with it, too. He can speak, but only softly and with a lisp. He can walk, but only slowly and with great effort. His face little resembles the ear-to-ear grin of his official photo. His smile is lopsided now."

His fellow South Dakota lawmakers, Republican Sen. John Thune and Democratic Rep. Stephanie Herseth Sandlin, both told Politico he was up to the job.

"Whether you spend a couple of hours with him over dinner or whether you start working with him in the office or seeing him on the floor, he’s back," Herseth Sandlin said. "His speech may not be perfect, but it’s obvious to everyone that there’s been no impairment to the cognitive abilities."

In 2008, Johnson won reelection and completed his six-year term. 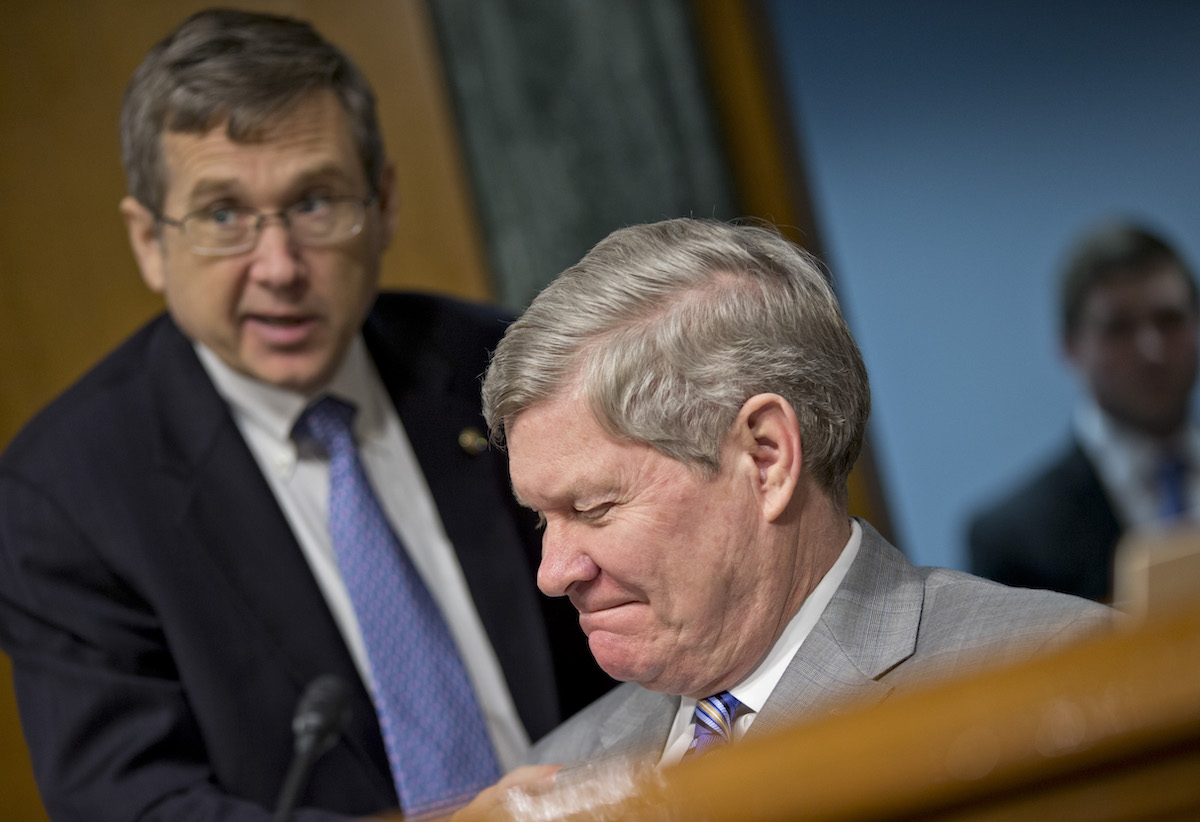 It took him a year to return to work. Until then, "he mostly stayed out of public view, save for two videos that provided updates on his recovery," The Atlantic reported in 2015. "Aides say now that, at the time, getting the senator to deliver even a short scripted speech to the camera was extremely difficult for a man who was literally learning to talk again."

While colleagues said his condition improved considerably, "the physical diminishment is apparent," The Atlantic wrote.

Kirk, like Johnson, ran for another term in 2016. The issue came up periodically, but not as much as it has in Fetterman’s race. Ultimately, Kirk lost to Democrat Tammy Duckworth (who herself has a disability, stemming from injuries during her military service). Illinois became noticeably more Democratic between 2010 and 2016, so Kirk might have lost his seat even if he hadn’t had a stroke.

• Ben Ray Lujan, D-N.M. In January 2022, Lujan experienced a stroke. He underwent surgery and spent a few months recovering before returning to the Senate. "Though he still has some tingling in his right hand, the scar is the only visible sign of what happened," The New York Times wrote in early May. "His speech is rapid and completely fluid."

• Chris Van Hollen, D-Md. Van Hollen was the second Democratic senator to experience a stroke in early 2022. It occurred in May, but he was back to the Capitol within a few weeks.

The Washington Post reported in June that Van Hollen was "feeling fine, noting his only lingering side effect is some recurring neck pain, for which he is taking Tylenol. He is also on a temporary blood pressure medication."

An earlier historical example may have been the most severe, and caused the most disruption.

Sen. Karl E. Mundt, R-S.D., experienced a stroke in 1969. Rich Cohen, now the chief author of the Almanac of American Politics, was working as a congressional aide at the time. Cohen recalled in an interview with PolitiFact that Mundt’s involvement in the Senate, including casting votes, was minimal for his term’s remaining three years. It was widely reported that Mundt’s wife was running the office, and the GOP conference eventually stripped him of his committee positions.

Several now-deceased senators stepped away from daily Senate business for months at a time to be treated for cancer, including Ted Kennedy, D-Mass.; John McCain, R-Ariz.; and Arlen Specter, who served as both a Republican and a Democrat from Pennsylvania. McCain famously returned to the well of the Senate just weeks after his diagnosis to vote thumbs-down on the Republicans’ proposed repeal of the Affordable Care Act.

Senators who have had the most difficulty fulfilling their duties have been those grappling with neurological diseases during their tenure.

Robert Byrd, D-W.Va., spent his final years in the chamber slowed from his previous pace; experienced hand tremors attributed to Parkinson’s disease, and he used a motorized wheelchair. Johnny Isakson, R-Ga., was diagnosed with Parkinson’s in 2013 and retired before his term expired in 2019 amid what he described as "mounting health challenges."

By late in his Senate tenure, Sen. Strom Thurmond, R-S.C., was pushing 100 years old and sometimes seemed "confused at Senate hearings, where his participation has been reduced to little more than his reading questions from cards prepared by his staff," The New York Times reported in 2001. The story added that congressional aides said Thurmond’s chief of staff made "most of the decisions" in his office. A few years later, Sen. Thad Cochran, R-Miss., was described by Politico as "frail and disoriented."

More recently, media accounts have suggested that Sen. Dianne Feinstein, D-Calif., has experienced signs of mental decline, though she and allies have pushed back on that narrative.

How this history compares to Fetterman’s situation

The examples show that it’s possible to serve in the Senate after a stroke or other major health challenges.

"Senators do take time to convalesce and their offices continue to function," said Gregory Koger, a University of Miami political scientist who specializes in the Senate. "In some cases, obviously, this means senators are not voting, since staff can't do that. But most other functions can continue."

The severity and after-effects of strokes vary.

Based on what we know now, Fetterman is physically capable of making it to the Senate floor to cast votes and to committee rooms to attend hearings. He is currently traveling for the campaign. While the debate and interviews he has given have suggested that his ability to speak and hear are not the same as before his stroke, the campaign has cited a report from his doctor that said Fetterman was "without cognitive deficits."

The biggest shortcomings, Koger said, might be with "personal interactions, such as talking with other senators, meeting with constituents and lobbyists and calling donors to ask for contributions."

It’s also worth noting that Fetterman’s stroke occurred in May, so he’s only five months into his recovery. With another few months, he could make more progress. If he were to win, he would not need to give his maiden speech until a few months into his term, as is customary.

"With appropriate assistance, I think Fetterman can handle all essential duties," said Arthur Caplan, a medical ethicist at the New York University Grossman School of Medicine. "There are many in Congress, I suspect, using hearing aids, contact lenses, glasses, wheelchairs" and other assistive technologies, "and no one is harping about their lack of fitness to serve."

The New York Times, "The Stroke That Nearly Broke the Democratic Majority," May 5, 2022

Arizona Republic, "It has been one year since Sen. John McCain's brain cancer was discovered. What's next?" July 13, 2018

Email interview with Gregory Koger, University of Miami political scientist who specializes in the Senate, Oct. 24, 2022

Interview with Rich Cohen, chief author of the Almanac of American Politics, Oct. 26, 2022