Anti-abortion demonstrators rally Jan. 20, 2023, outside of the U.S. Supreme Court during the March for Life in Washington. (AP)

Anti-abortion advocates are pressing for expanded abortion bans and tighter restrictions since the Supreme Court overturned the national right to abortion. But with the debate mostly deadlocked in Washington, the focus is shifting to states convening their first full legislative sessions since Roe v. Wade was overturned.

Although some state GOP lawmakers have filed bills to ban abortion pills or make it more difficult for women to travel out of state for an abortion, others seem split about what their next steps should be. Some are even considering measures to ease their states’ existing bans somewhat, particularly after Republicans’ less-than-stellar showing in the 2022 midterm elections and voters’ widespread support for abortion on state ballot measures.

Meanwhile, Democratic-led states are looking to shore up abortion protections, including Minnesota and Michigan, where Democrats sewed up legislative majorities in the November elections.

Anti-abortion groups said their goal in overturning Roe v. Wade was to turn the decision back to the states, but now they are making clear that what they want is an encompassing national abortion ban.

"Legislation at the state and federal levels should provide the most generous protections possible to life in the womb," says the "Post-Roe Blueprint" of the anti-abortion group Students for Life.

The new Republican-led House showed its anti-abortion bona fides on its first day of formal legislating, Jan. 11, passing two pieces of anti-abortion legislation that are unlikely to become law with a Senate still controlled by Democrats and President Joe Biden in the White House.

So, at the federal level, the fight is taking shape in the courts over the abortion pill mifepristone, which has been used as part of a two-drug regimen for more than two decades, and recently became the way a majority of abortions in the U.S. are conducted.

The Biden administration has moved to make mifepristone more widely available by allowing it to be distributed by pharmacies, as well as clarifying that it is legal to distribute the pills via the U.S. mail. But the conservative legal group Alliance Defending Freedom, on behalf of several anti-abortion groups, filed a federal lawsuit in Texas in November, charging that the FDA never had the authority to approve the drug in the first place.

In Texas, some lawmakers are exploring new ways to chip away at Texans’ remaining sliver of access to abortions. For example, one proposal would prevent local governments from using tax dollars to help people access abortion services out of state, while another would prohibit tax subsidies for businesses that help their local employees obtain abortions out of state.

Those measures could get lost in the shuffle of the state’s frantic 140-day, every-other-year session, if legislative leaders don’t consider them a priority. The state’s trigger law banning almost all abortions that went into effect last year "appears to be working very well," said Joe Pojman, founder and executive director of Texas Alliance for Life, an anti-abortion group. In August 2022, three abortions were documented in the state, down from more 5,700 reported during the same month a year earlier, according to the most recent state data.

The top state House Republican said his priority is boosting support for new moms, for example, by extending postpartum Medicaid coverage to 12 months.

It’s "an opportunity for the Texas House to focus more than ever on supporting mothers and children," said Republican House Speaker Dade Phelan.

South Dakota Gov. Kristi Noem, a Republican, struck a similar theme in a Jan. 10 speech, saying she will introduce bills to expand a program for nurses to visit new mothers at home and help state employees pay for adoptions. Previously, Noem said South Dakota needs to focus "on taking care of mothers in crisis and getting them the resources that they need for both them and their child to be successful." 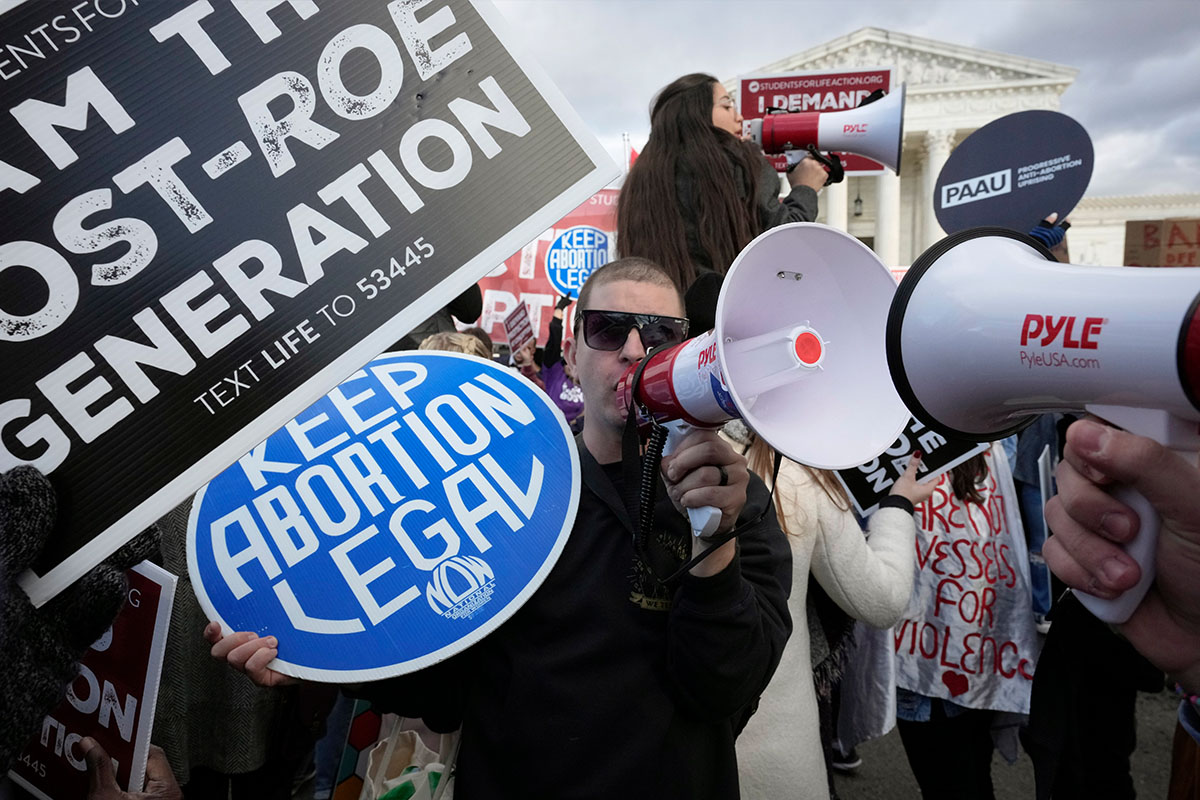 An abortion rights protester uses a megaphone as anti-abortion demonstrators rally outside the U.S. Supreme Court on Jan. 20, 2023, during the March for Life in Washington. (AP)

Some Texas GOP lawmakers indicated they may be open to carving out exceptions to the abortion ban in cases of rape and incest. And a Republican lawmaker plans to attempt to modify South Dakota’s ban, which allows abortions only for life-threatening pregnancies, to clarify when abortions are medically necessary.

"Part of the issue right now is that doctors and providers just don’t know what that line is," said state Rep. Taylor Rehfeldt, a nurse who has experienced miscarriages and high-risk pregnancies herself.

Rehfeldt wants to reinstate a former law that allows abortions for pregnancies that could cause serious, irreversible physical harm to a "major bodily function." Rehfeldt said she is also working on bills to allow abortions for people carrying nonviable fetuses, or who became pregnant after rape or incest.

Some anti-abortion activists in Georgia are pushing lawmakers to go further than the state’s ban on most abortions at about six weeks of pregnancy. They want a law to ban telehealth prescriptions of abortion pills and a state constitutional amendment declaring that an embryo or a fetus has all the legal rights of a person at any stage of development.

"Roe is out of the way," said Zemmie Fleck, executive director of Georgia Right to Life. "There’s no more roadblock to what we can do in our state."

Republican leaders, however, are biding their time while Georgia’s high court weighs a legal challenge of the six-week ban.

"Our focus remains on the case before the Georgia Supreme Court and seeing it across the finish line," said Andrew Isenhour, spokesperson for Republican Gov. Brian Kemp.

Abortion rights lawmakers and advocates have few options to advance their initiatives in these Republican-controlled statehouses.

A Georgia Democrat filed a bill that would make the state compensate women who are unable to terminate pregnancies because of the state’s abortion ban. State Rep. Dar’shun Kendrick acknowledged her bill likely won’t go far, but she said she hopes it keeps attention on the issue and forces GOP lawmakers to "put their money where their mouth is" in supporting families.

In Missouri, where nearly all abortions are now banned, abortion rights advocates are mulling the idea of circumventing the state’s Republican-dominated legislature by asking voters in 2024 to enshrine the right to an abortion in the state’s constitution.

But those efforts could be upended by a slew of bills filed by Republican lawmakers seeking to make it more difficult to place constitutional initiatives on the ballot, and for those measures that do make it on the ballot, by requiring the approval of at least 60% of voters for passage.

Democrats in Michigan and Minnesota are likely to use their newfound control of both legislative chambers and the governors’ office to protect abortion access. While Michigan voters already passed a ballot measure in November that enshrines the right to abortions in the state constitution, Democrats are trying to repeal a 1931 abortion law from the books.

In Illinois, Democrats in control of the legislature recently bolstered abortion protections amid increased demand from out-of-state residents. New York lawmakers this year may send voters a proposed state constitutional amendment to protect abortion, while New Jersey lawmakers decided against a similar proposal.

The November elections brought divided government to Arizona and Nevada, with Arizona now having a Democratic governor and Nevada having a Republican one. Any abortion-related bills that pass the legislatures in those states could be vetoed.

Some Republican-controlled legislatures, including those in Montana, Florida, and Alaska, also are limited in passing sweeping abortion bans because of court rulings that tie abortion access to right-to-privacy provisions in those states’ constitutions.

In Montana, a state judge blocked three anti-abortion laws passed in 2021 on that basis. State government attorneys have asked the Montana Supreme Court to reverse the precedent, and a decision is pending.

In the meantime, Republican state Sen. Keith Regier has filed a bill there seeking to exclude abortion from the state’s definition of a right to privacy. Regier said he believes an individual’s right to privacy should not apply to abortion because an unborn child also is involved.

Democratic leaders said Republicans are out of sync with the people they represent on this issue. In November, Montana voters rejected a "born alive" ballot initiative that would have required doctors to apply medical care to newborns who draw breath or have a heartbeat after a failed abortion or any other birth.

"Montanans said so clearly that they do not want government overreach in their health care decisions," said Democratic state Rep. Alice Buckley.

Kat Cammack
stated on July 21, 2022 a speech on the floor of the U.S. House of Representatives:
“In no way, shape, or form is access to contraception limited or at risk of being limited.”

Alex Azar
stated on July 9, 2020 comments made during a virtual summit sponsored by The Hill newspaper:
“First off, it’s in statute already in HIPAA that preexisting conditions are covered.”

Chris Coons
stated on May 14, 2019 an interview on MSNBC's "Morning Joe.":
Obamacare granted "the protection against preexisting condition discrimination that extended to more than 150 million Americans, folks who get their health insurance through their employer."