Health policy experts are eyeing one group of Americans very carefully as people sign up for health coverage on insurance exchanges: young adults.

Participation by this age group is seen as crucial to the success of the insurance marketplaces. Young adults are generally in better health and are needed to balance out risk among other, older enrollees, and they’re disproportionately uninsured.

On NBC’s Meet the Press on Sunday, host David Gregory asked if "the lag effect" of the struggling federal marketplace will deter young adults from signing up for insurance.

Washington Post Wonkblog editor Ezra Klein said the Obama administration was planning to deploy a vast marketing campaign to encourage young people to sign up through their preferred TV shows, social networks and parents, but the effort was not fully rolled out as problems with Healthcare.gov persisted.

Dr. Ezekiel Emanuel, a bioethicist and former health care adviser in the Obama administration, pointed to a microcosm of success in California, where the state-based exchange is "working well enough."

California’s enrollment figures were described as "a rare bright spot" by the New York Times amid dismal reports about the federal marketplace. We wanted to dig in a little more and find out if Emanuel is right that young adults are signing up as a proportion to the population in California.

Several experts we reached were initially thrown by Emanuel’s use of "kids." Emanuel clarified he was referring to news about young adult sign-ups from Covered California, the state’s health insurance exchange, in a brief interview. (He added that he has an almost 30-year-old "kid.")

Covered California, the state's insurance marketplace, distributed a Nov. 21 press release that pointed out 18- to 34-year-olds applied "in direct proportion to California’s population" in October. 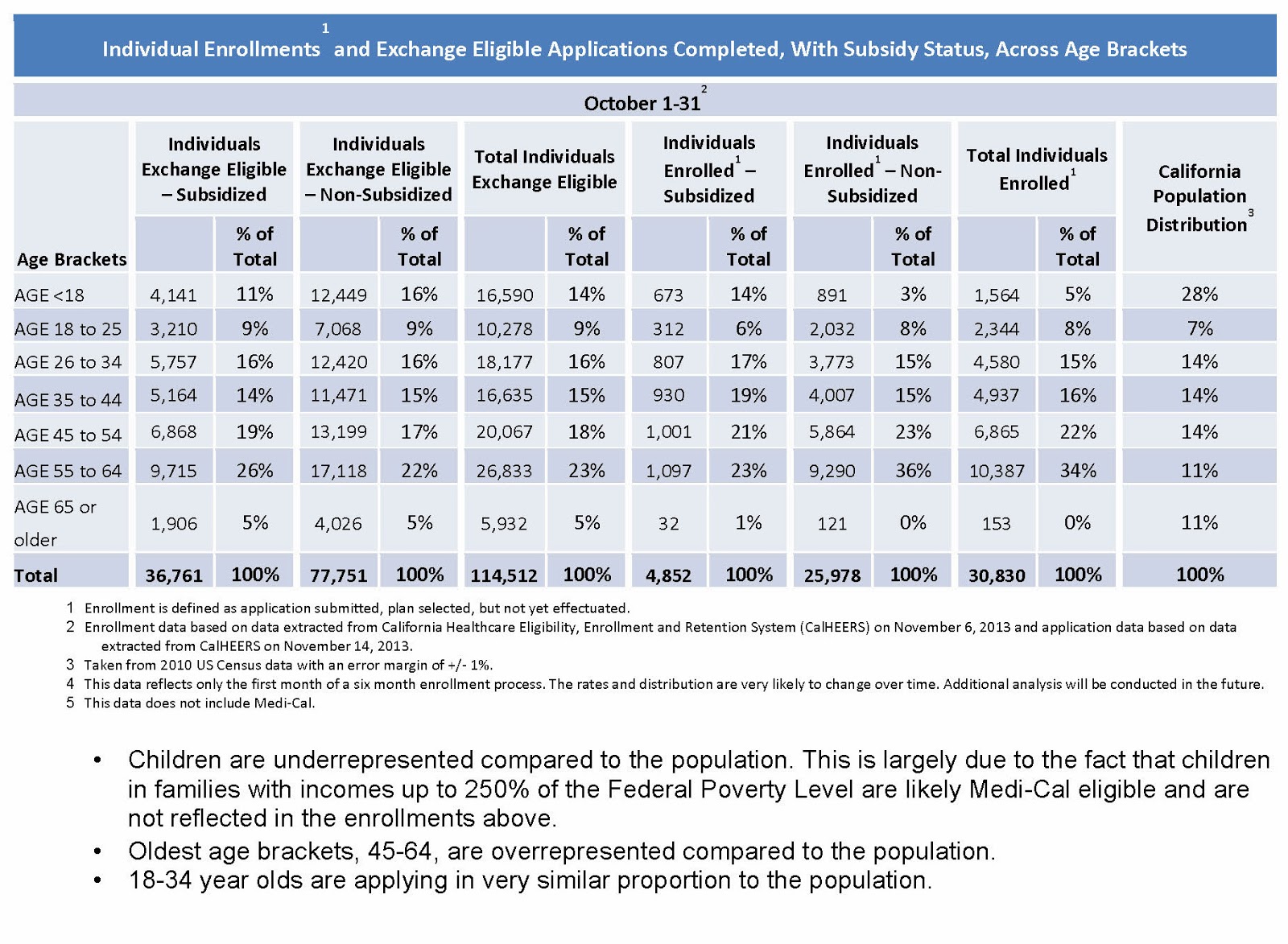 The gap widens if you tinker with different data. Young adults comprise 25 percent of the state’s population using 2012 data from the American Community Survey, and about 27 percent if you take out the 65-and-over population, which is eligible for Medicare, according to the California Health Interview Survey 2011-12 data.

So, we’re all finished here, right? Well, hold on.

For one thing, experts said it’s way too early to draw sweeping conclusions from the state’s first month of data. November data, unavailable until mid December, could tell a very different tale. The real meaningful test will be how many young adults sign up long-term.

"People talk about these numbers because we have them, but you can't extrapolate from these," said Glenn Melnick, a University of Southern California health policy professor.

Then there’s another matter of Covered California, and Emanuel, spinning the data in a way that emits positivity but, experts say, is not exactly relevant.

Instead of comparing the percentage of young adult enrollees to their share of the population, some said it would be better to compare those signups to young adults’ share of the uninsured population, which is about 40 percent, several experts said.

"They need it proportionate to the target population, which is the uninsured," Melnick said.

Another issue with comparing to a share of the population: The marketplaces established by the health care law are not really intended for the nation’s youngest and oldest residents. Children who receive coverage because of the law are getting it mainly through expanded Medicaid offerings, and adults over 65 are eligible for Medicare. That means comparisons could be misleading.

"So that’s not to say that they are completely off the table, but they are by design expected to be less represented in the enrollment in Covered California than their presence in the population," said Marian Mulkey, director of the California Healthcare Foundation’s Health Reform and Public Programs Initiative.

Using 2011 Current Population Survey data, the foundation determined that 41 percent of the state’s uninsured population under age 65 is between the ages of 18 and 34. Since one of the goals of the law is to get more people in this group insured, you’d want to see young adult signups go higher than just their share of the overall population, she said.

"I would submit that that’s not quite a high enough bar for what they should be aiming for," she said of measuring the signups against the overall population. "I would hasten to say that this is very early data, it doesn’t mean that they won’t get there."

Gail Wilensky, the director of Medicaid and Medicare under President George H.W. Bush, agreed that measuring sign-ups of young adults against the percentage of uninsured young adult Californians would be the more relevant statistic.

"This might not look quite so good as the percent of the population since this group is disproportionately uninsured," Wilensky said.

Still, Dylan Roby, a UCLA School of Public Health assistant professor of health services, disagreed with the idea of the uninsured population being a better benchmark. In California, he said, the risk pool for plans sold on the individual market, both within the exchange and outside of it, is the same. Plus, he said people who sign up for insurance early are likely to be those who already have it but were not previously eligible for subsidies on the exchange.

"So, given that we don’t have numbers on how many 18-34 year olds are signing up for coverage outside of the exchange with the same consumer protections, deductible limits, out-of-pocket maximums, etc., I am not sure you can make any statement about the magnitude of sign-ups and response to the new plans," he said.

Roby said his target would be for 35-40 percent of people signed up on the individual market (through Covered California or on their own) to be between the ages of 18 and 34 at the end of open enrollment. More than 2 million uninsured Californians are 18-34 years old.

Genevieve Kenney, a senior fellow at the Urban Institute, struck a similar chord, saying neither view of the percentage of young adult enrollments -- whether compared to their share of the state population or of the uninsured population -- is necessarily germane.

"Neither one really tells you what we should expect to see if young adults were participating in proportion to their share of the overall target population for the exchange," she said. "That’s what feels relevant to me."

Many uninsured young adults actually look like they’re eligible for Medicaid, she said. So just looking at the percentage of those who are signing up for exchange coverage against the overall uninsured population doesn’t tell the full story.

She added that enrollment estimates broken down by age group are hard to come by, and "I haven’t myself tried to calculate that particular target."

A Nov. 20 Reuters story that analyzed early data from state-run exchanges in Connecticut, Kentucky, Washington and Maryland said "so far more than 20 percent of the 23,500 combined enrollees in private insurance plans are 18 to 34 years old, ranging from about 19 percent in Kentucky and Connecticut to about 27 percent in Maryland." Other state-run exchanges, such as New York and Hawaii (and D.C.), have not released enrollment data by demographic.

The early turnout among young adults is encouraging, said Jen Mishory, deputy director of the Young Invincibles, an advocacy group focused on enrolling young adults into coverage, in an interview. "We anticipate that we’ll see a broader surge in young people as they get more educated."

Several of those states reported an uptick in enrollments in the early weeks of November, including California.

The statement is pretty accurate for young adults for the month of October. But it is a curious statistic. Health policy experts said the stat is misleading because the entire California population is not supposed to access the marketplace. They offered more apt comparisons that relate more closely to the uninsured population and alter the figures.

The more important takeaway is that it’s very early to draw significant conclusions about California’s performance and what it could mean for a functional Healthcare.gov after its first month.

We rate Emanuel’s claim Half True.

Interview with Genevieve Kenney, a senior fellow at the Urban Institute, Dec. 4, 2013