Sarah Palin
stated on April 26, 2014 in speech to the NRA convention:
Says Attorney General Eric Holder recently revealed "this idea to have government have gun owners wear special bracelets that would identify you as a gun owner."

"Waterboarding is how we baptize terrorists" was not the only questionable thing Sarah Palin said during her recent speech to National Rifle Association enthusiasts.

"Every day we are seeing more and more efforts to strip away our Second Amendment rights," Palin told the crowd. "They are trying," she said, before leading into her claim about Holder.

"Recently, he reveals this idea to have government have gun owners wear bracelets, special bracelets, that would identify you as a gun owner," Palin said. "Well, hey, Holder, you don't want to go there, buddy."

There is more to the story than Holder wanting gun owners to wear identifying bracelets.

"We talked about how guns can be made more safe by making them either through fingerprint identification, the gun talks to a bracelet or something that you might wear, how guns can be used only by the person who is lawfully in possession of the weapon.

"It’s those kinds of things that I think we want to try to explore so that we can make sure that people have the ability to enjoy their Second Amendment rights, while at the same time decreasing the misuse of weapons that lead to the kinds of things that we see on a daily basis, you know, where people, kids especially, are struck down by ..."

Harris cut him off, saying "sure, no one wants that to occur," and moved on.

Holder’s comment about new gun technology was picked up a few days later in an April 7 Washington Free Beacon story under the headline, "Holder: We Want to Explore Gun Tracking Bracelets." From there, it was picked up by Fox News, InfoWars, Townhall.com and the National Rifle Association, among others. In each case, the coverage focused on the idea of "gun tracking bracelets."

But the technology doesn’t track gun owners, and it doesn’t always require a bracelet.

Smart guns and the Department of Justice

Holder had smart guns on his mind because of President Barack Obama and reforms he sought after the Sandy Hook Elementary School shootings.

Obama directed Holder, via one of 23 executive orders, to release a report on gun safety technology "and challenge the private sector to develop innovative technologies." As he mentioned in his testimony, the department’s National Institute of Justice released a report in June 2013 assessing the marketplace, and Holder chaired a meeting with industry leaders and experts at the White House.

Smart guns are also called "owner-authorized guns," "childproof guns" and "personalized guns." Basically, these are firearms made with electronic chips and sensors that can discern an authorized user from an unauthorized user. The gun will fire if it recognizes the owner and won’t if the owner is not recognized.

Some high-tech models include a fingerprint reader that works kind of like the one in new iPhones (or James Bond’s personalized gun in Skyfall). Other models include the capability to read a radio signal from a transmitter embedded into a bracelet, ring, watch or pin worn by the gun owner, or even a chip implanted in the hand.

"If that is within a certain programmed distance to the gun, the gun mechanically makes itself operable," said Stephen Teret, a smart-gun proponent, professor at Johns Hopkins Bloomberg School of Public Health and director of the Center for Law and the Public’s Health. "If it’s not within a certain distance, the gun won't work."

So the short signals emitted in smart-gun technology do not function like GPS on mobile phones and other devices. The lack of GPS technology would prevent the government from identifying and tracking gun owners, should the government try, said Mike Bazinet, spokesman for the National Shooting Sports Foundation, a firearm and ammunition trade group. Bazinet noted that doesn't mean the group isn't concerned about that prospect.

The technology could require a bracelet. It could also require a watch, a ring, a pin, or even just a fingerprint, experts say.

The point is there is no plan to identify gun owners with a "scarlet letter" bracelet.

Teret says the earliest smart gun was developed by Smith & Wesson in the 1880s. The manufacturer added a metal lever to the back of its handguns, requiring a person to press the the lever and the trigger at the same time to fire the weapon. A child’s hand would be too small to do that, thus preventing accidental injuries and deaths.

Manufacturers started thinking about incorporating electronics into guns in the early 1990s to make them safer. The concept had support from the Bill Clinton administration, lost steam during the George W. Bush years, and then re-emerged after the Newtown, Conn., school shootings under Obama, Teret said.

International companies, such as Armatix in Germany and TriggerSmart in Ireland, are ahead of the curve, thanks in part to less political resistance, Teret said. But there is technology emerging in the United States. Utah-based Kodiak Industries is offering the Intelligun, a fingerprint-locking system installed onto a 1911-style, .45 caliber pistol, for $399.

This year, a California gun retailer told the Washington Post he planned to sell the Armatix iP1 .22 caliber pistol, an $1,800 product that works with a black stopwatch and PIN code that emits radio signals to the gun when worn by the right user. It was supposed to be the first smart gun sold in the United States, but the owner and Armatix representative received backlash from gun rights activists, and the plans were scrapped. 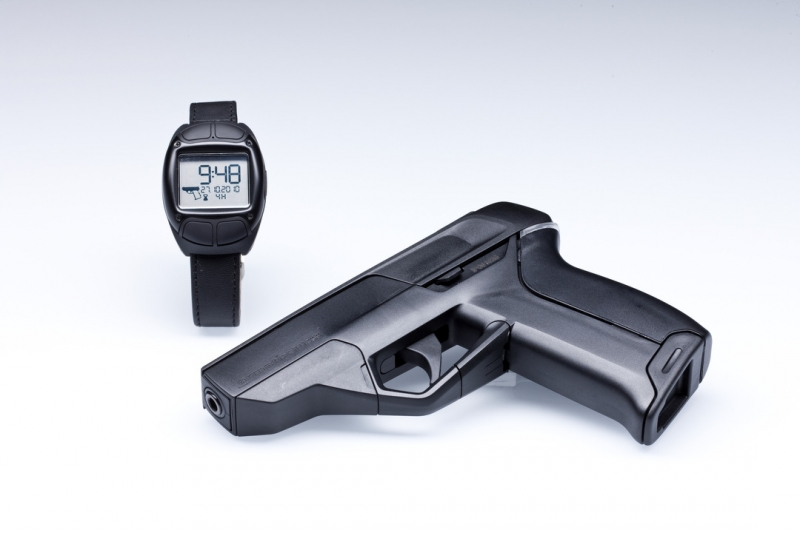 It’s not the development of smart guns that concerns the firearms industry, Bazinet said. It’s government’s embrace of them. A New Jersey law, the only one of its kind, requires after three years from the first smart gun being sold in the United States that all new guns sold in the state be built with this technology.

To Bazinet, smart guns won’t be ready for mass use until police forces are using them. His group has warned about defective guns and dead batteries while saying consumers should be able to buy them if they want.

Of course, none of this information changes the veracity of Palin’s comments about ID bracelets for gun owners. It just shows how wrong she was.

Emails to Palin’s political action committee were not returned.

According to Palin, Holder recently revealed "this idea to have government have gun owners wear bracelets, special bracelets, that would identify you as a gun owner."

That’s far from the truth.

Holder said he wants the federal government to explore gun safety measures, including smart-gun technology that would prevent weapons from being fired by anyone except their rightful owner.

The comment in question came as he explained why his agency is seeking federal money for grants to spur research into safer guns. He listed fingerprint identification and the gun talking "to a bracelet or something that you might wear" as tools that could prevent a gun owner’s firearm from being used by someone else. Some smart guns are powered by bracelets with embedded radio signal transmitters, but that’s just one way this could work.

The purpose of accessories worn in order to fire a smart gun is not to help the government track owners or identify them (again, Holder is pursuing no such policy). The goal of the emerging technology is to minimize shootings caused by suicides, children or stolen guns.

Real Clear Politics, "Eric Holder: Gun owners should wear a bracelet to use their weapon," April 9, 2014

The Washington Post, "‘We need the iPhone of guns’: Will smart guns transform the gun industry?" Feb. 17, 2014