Texas Organizing Project
stated on March 5, 2015 in a press release:
"The unemployment rate among blacks in Texas is 9.5% -- far more than double white unemployment -- and wages have fallen for black workers in Texas since 2000."

Urging the Federal Reserve Bank of Dallas to choose a president who prioritizes jobs and rising wages "for all communities," a Texas group said African Americans in the state have fared poorly on both fronts.

The Texas Organizing Project, which says it promotes social and economic equality for low- to moderate-income residents, joined labor unions in calling on the Fed, which has kept interest rates near zero since 2008 to spur business lending, not to raise interest rates and focus instead on full employment and higher wages, according to a March 4, 2015, news story in the Dallas Morning News.

The project got our attention in a March 2015 press release with this: "Although the economy is adding jobs, the unemployment rate among blacks in Texas is 9.5% -- far more than double white unemployment -- and wages have fallen for black workers in Texas since 2000."

To our inquiry, a project spokesman, Daniel Barrera, pointed us by email to a March 2015 report by the Brooklyn-based Center for Popular Democracy, which says it promotes "equity, opportunity and a dynamic democracy." The report, "Wall Street, Main Street, and Martin Luther King Jr. Boulevard: Why African Americans Must Not Be Left Out of the Federal Reserve’s Full-Employment Mandate," presents charts with the cited figures, which the Washington, D.C.-based Economic Policy Institute based on federal wage and employment data.

We wondered if blacks saw falling wages by this measure all through those years. They did not: To our inquiry, the Economic Policy Institute provided year-by-year data showing the hourly median for black Texans decreased in six years while going up in eight years. Through the period, the real median wage for Texas African Americans bottomed out at $13.61 in 2008. It crested at $15.18 in 2012.

Nationally at the end of the 15-year period, median real wages of African-American workers were down even more than in Texas alone, according to the report. That is, the national median real hourly wage for African Americans in 2014 was $13.97, about 3 percent less than the comparable median of $14.41 in 2000. Also, according to the report, other states had bigger differences between the first and last years studied. 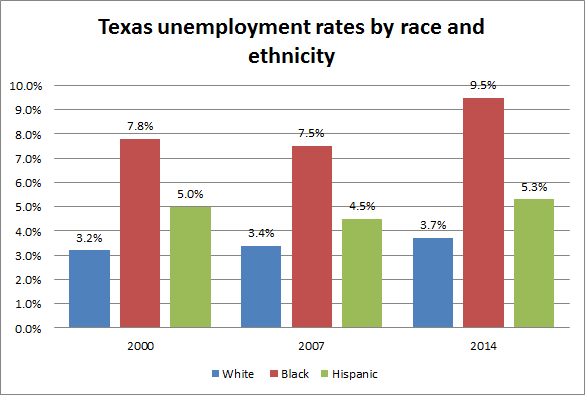 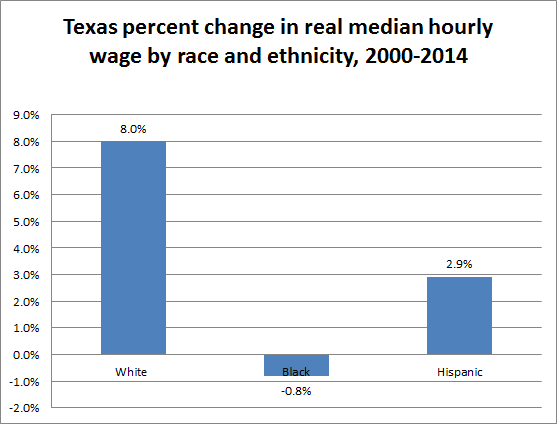 Missing from the report: Why the differences between black workers and others?

When we called to ask about that, Ady Barkan, a center official, suggested multiple longstanding factors including racism and differences between blacks and whites in education levels and rates of incarceration. By email, Barkan also pointed out a July 2011 issue paper from the liberal Center for American Progress noting, among reasons, that in each of the latest U.S. recessions, blacks were most often the first employees fired and the last ones hired (once each recession was ending).

We asked the Economic Policy Institute why black unemployment in Texas appeared to be running higher than white and Hispanic unemployment. Josh Bivens, director of research and policy, said by email this may be because of discrimination in the labor market and pre-labor market. And what’s the "pre-labor" market? Bivens said residential segregation can lead to blacks going to lower-quality primary and secondary schools, potentially resulting in lower levels of educational achievement and less lucrative jobs.

We also sought an explanation of the cited differences from Chris King, director of the Ray Marshall Center for the Study of Human Resources at the University of Texas. By email, King said labor economists would  explain higher unemployment among blacks/African Americans nationally by pointing out that African Americans tend to have lower levels of education and be employed in lower-paying occupations and industries than whites. King elaborated by pointing out Bureau of Labor Statistics data covering 2011 showing black men more likely to work in service, production, transportation and "material moving" jobs. Conversely, he wrote, black men were less likely to work in professional and managerial jobs than whites; the picture was similar, he said, for black women. (See his full reply here.)

Separately to our inquiry, analyst Chuck DeVore of the conservative Texas Public Policy Foundation suggested real median hourly wage estimates used by the institute may deliver an incomplete picture of economic well being. "People don’t live on wages alone," DeVore said, adding that a more accurate indicator of wealth would be household income, folding in Social Security, inheritances and any other financial assistance. See more on this aspect here.

The Texas Organizing Project said: "The unemployment rate among blacks in Texas is 9.5% -- far more than double white unemployment -- and wages have fallen for black workers in Texas since 2000."

Texas African Americans may not have been as bad off as residents of other states, and this claim doesn’t acknowledge wage fluctuations over the years. Regardless, evidence shows Texas blacks having a higher unemployment rate than fellow Texans and also being the lone group with lower wages in 2014 than in 2000.

We rate the statement True.

Report, "Wall Street, Main Street, and Martin Luther King Jr. Boulevard: Why African Americans Must Not Be Left Out of the Federal Reserve’s Full-Employment Mandate,"  Center for Popular Democracy, April 6, 2015

Texas Organizing Project
stated on March 5, 2015 a press release:
"The unemployment rate among blacks in Texas is 9.5% -- far more than double white unemployment -- and wages have fallen for black workers in Texas since 2000."

Tim Cook
stated on March 29, 2015 an oped column:
"Legislation being considered in Texas would strip the salaries and pensions of clerks who issue marriage licenses to same-sex couples — even if the Supreme Court strikes down Texas’ marriage ban later this year."

Jerry Falwell Jr.
stated on March 23, 2015 a speech introducing Ted Cruz at Liberty University:
Ted Cruz was "the longest-serving solicitor general in the history of Texas."

Rick Perry
stated on February 27, 2015 a web ad:
"At this particular point in time, looking at the field, there’s only one individual that’s ever had the uniform of his country on—and that’s me."

Dave Claunch
stated on January 14, 2015 a meeting of the West Lake Hills City Council:
"Austin has more lobbyists working for it than any other municipality in Texas."

Ted Cruz
stated on January 20, 2015 an interview with Fox News:
"Today the top 1 percent earn a higher share of our national income than any year since 1928."