Mitch McConnell
stated on January 7, 2015 in a Senate floor speech:
A recent economic uptick appears to "coincide" with "the expectation of a new Republican Congress."

Newly installed Senate Majority Leader Mitch McConnell, R-Ky., suggested that good economic news coincided with the "expectation" of a GOP takeover of the Senate. Is that correct?

"After so many years of sluggish growth, we’re finally starting to see some economic data that can provide a glimmer of hope," McConnell said. "The uptick appears to coincide with the biggest political change of the Obama administration’s long tenure in Washington: the expectation of a new Republican Congress."

McConnell stopped short of saying the Republican Senate takeover actually caused an economic improvement, though many media observers assumed that was what he was trying to imply. In the liberal New Republic, Brian Beutler joked, "It absolutely does coincide with the expectation of a new Republican Congress. Relatedly, things that coincide are called ‘coincidences.’ "

But is McConnell even right that the economic data and the political expectations coincided? We focused on two questions.

First, when did "the expectation of a new Republican Congress" actually solidify? And second, was there an uptick in economic data that actually coincided with that time frame? We’ll also briefly address the question of causation, even though McConnell didn’t explicitly claim that.

The data we found suggest McConnell is engaging in some wishful thinking.

When did "the expectation of a new Republican Congress" actually emerge?

To answer this question, we checked with political analysts who handicapped the 2014 battle for the Senate and also looked at poll-based forecasting models. McConnell said "expectation," a stronger word than "possibility" and one that requires a reasonable degree of consensus.

Going into the 2014 Senate elections, most observers expected the GOP to gain seats, due primarily to a favorable map for the GOP (far more Democrats were up for re-election, especially in conservative states) combined with the longstanding history of "six-year-itch" midterm elections bedeviling second-term presidents, in this case Democrat Barack Obama.

But whether the GOP would actually manage to win enough seats to seize control of the chamber -- six -- was less certain. Going into the election, the Democrats held a 55-45 edge (counting two Democratic-caucusing Independents as Democrats). With many individual races rated as highly competitive right through Election Day, winning a net six seats was no slam dunk.

Jennifer Duffy, who handicaps Senate races for the Cook Political Report, said different political experts settled on a Republican takeover at different times but added that she felt "pretty comfortable with a gain of six seats around Labor Day," which was on Sept. 1 last year.

Kyle Kondik, managing editor of Sabato's Crystal Ball, agreed that Labor Day was a turning point, though he added that "there were slivers of doubt right up until the end. We formally called the Senate for the Republicans the week before the election, but we also suggested that a GOP Senate was likely in the months prior to the election."

The forecasters at fivethirtyeight.com suggested the toss-up lasted past Labor Day. They calculated the likelihood of a GOP takeover at just over 50 percent as late as mid September, before rising again, ultimately to 76 percent on the eve of the election. The New York Times’ in-house forecast saw much the same pattern, narrowing to essentially a coin flip in mid September before climbing to a 75 percent chance of a GOP takeover by Election Day.

All told, this suggests that an "expectation" of a GOP takeover didn’t emerge until the beginning of September at the earliest, and possibly as late as the second half of September.

This leads to our next question.

Has there been an economic "uptick" that "appears to coincide" with this timeline?

McConnell’s office pointed us to the announcement that the economy grew at an annualized 5 percent rate in the third quarter of 2014, the biggest expansion in more than a decade. So we’ll start there.

The figure was indeed impressive. But there are two problems with citing this as evidence for McConnell’s point.

First, the third quarter covers July, August and September. So the bulk of this growth occurred before the expectation of a GOP Senate began to jell. Second, GDP growth for the second quarter -- covering April, May and June of 2014 -- was almost as impressive, 4.6 percent. And that was well before the "expectation" of a GOP takeover seemed to take hold. (In fact, for much of that quarter, the New York Times model showed the Democrats likelier to win control than the Republicans.)

Indeed, the longer-term trend for GDP growth shows that three of the past five quarters -- that is, since mid 2013 -- have exceeded 4 percent growth, and another quarter came close to that. Only one quarter, the first quarter of 2014, was a dud. So it’s not as if the impressive third-quarter growth of 2014 came totally out of the blue. 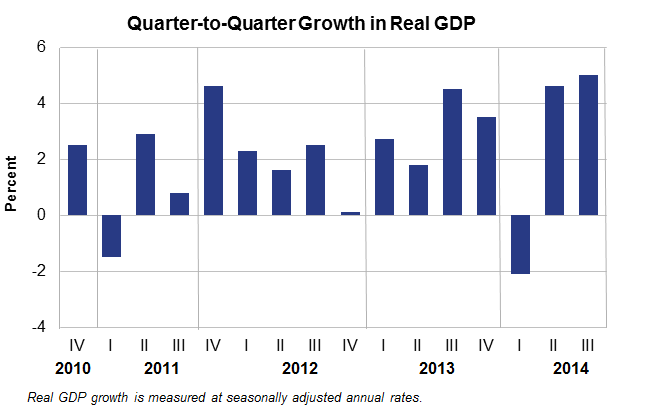 We also looked at another major yardstick for the economy -- the monthly change in employment.

During 2014, total monthly employment gains averaged 241,000. In October -- the month after the "expectation" of a GOP takeover would have taken hold -- the gain was almost exactly that, 243,000. The November total was 321,000 -- the highest of the year, but not far out of line when compared with the general trend for job creation since early 2011 (see chart below). It’s too soon to tell whether November’s figure kicks off a new, higher threshold or whether the number settles back again into the 240,000 range.

The strongest evidence for McConnell’s point is consumer confidence. The University of Michigan Index of Consumer Sentiment did experience an uptick between November and December, but even with this measurement, confidence had been rising consistently since July.

And other evidence actually points in the opposite direction. Data for new orders of capital goods -- a good statistic for gauging how much confidence there is in future economic conditions -- actually fell every month between August and November.

The question of causation

Even if the statistical timeline fit perfectly, it’s worth remembering that correlation does not equal causation.

"I don't think that either party has that much power to affect short-run economic movements, except by royally screwing up, and I haven't seen any evidence that the expectation of a regime change of this sort would affect economic outcomes," said Tara Sinclair, a George Washington University economist.

It’s even possible to draw up a theory that runs the opposite direction as McConnell’s linkage.

Gary Burtless, a senior fellow with the Brookings Institution, said one reason GDP and employment have increased a bit faster in recent months "is that government investment, government consumption, and public employee payrolls have recently been rising instead of falling." Given this, McConnell’s comments linking the GOP and accelerated economic growth are ironic, Burtless said, since Republicans have been at the forefront of cutting government spending and payrolls.

McConnell said a recent economic uptick appears to "coincide" with "the expectation of a new Republican Congress." Even leaving aside the question of causation, key statistics show that the economic recovery was under way well before September, which is our best estimate for when the "expectation" of a GOP Senate solidified. We rate the statement False.

Help fund PolitiFact's Kickstarter to live fact-check the 2015 State of the Union and GOP response.

Bureau of Economic Analysis, "U.S. Economy at a Glance: Perspective from the BEA Accounts," accessed Jan. 8, 2014