When President Barack Obama reflects on 2014, he brings up a litany of highlights that include drawing down the Afghanistan war and Americans signing up for health insurance thanks to his health care law.

Oh, and slicing up the deficit. Obama is super-pumped about that. He made a point to brag about the deficit's drop in his 2015 State of the Union address.

"At every step, we were told our goals were misguided or too ambitious; that we would crush jobs and explode deficits," Obama said. "Instead, we’ve seen the fastest economic growth in over a decade, our deficits cut by two-thirds, a stock market that has doubled, and health care inflation at its lowest rate in fifty years."

Is he right about the deficit dropping by two-thirds?

As a reminder, don’t get the deficit twisted with the debt. They are only related, not the same.

The country’s annual deficit is the difference between what the government collects in revenues and spends in one year. The national debt, which exceeds $18 trillion, is the net of annual deficits minus any annual surpluses.

The White House is breaking down the deficit as a percentage of Gross Domestic Product, or GDP, and not actual dollars. Economists told us this is a valid way of analyzing the deficit, because it factors in the economy’s change over time. The White House sent us this chart, which relies on data from the White House Office of Management and Budget. 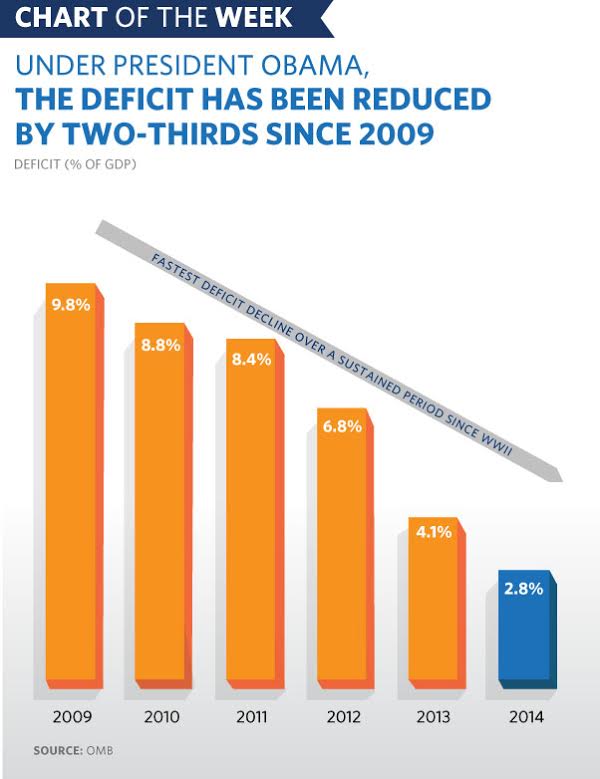 In fiscal year 2009, which started almost four months before Obama's presidency began and ended eight months into it, the deficit was 9.8 percent of GDP. The 2014 shortfall is 2.8 percent of GDP -- a decrease of 71 percent. So that's where the claim comes from.

The situation largely tracks if you use real dollars. Using the same comparison with Congressional Budget Office figures, the deficit fell from $1.4 trillion in the 2009 fiscal year to $486 billion in the 2014 fiscal year -- a drop of about 66 percent.

Experts told us that while Obama's math may be correct, it's missing some important caveats.

First, it's important to note that the deficit swelled in 2009 (hence the steady drop). In 2008, the deficit was $458 billion, or 3.1 percent of GDP. Those deficits are smaller than the ones the country is facing today. The 2009 fiscal year represented a huge jump in the deficit, partly because of the massive stimulus program to jumpstart the cratering economy.

"This is not to say that that large deficit was his fault, but if one used the 2008 deficit as a frame of reference, the comparison would be quite different," said Alan Auerbach, University of California Berkeley professor of economics and law.

Also, some economists we consulted pointed out that the 2009 fiscal year was Obama’s first year in office, and so not necessarily a good starting point since he had little control over the spending in that year.

And there's another issue. Princeton University economics professor Harvey Rosen said the more important question is if Obama has put the government on a path that will keep deficits stable. "And the answer is no," Rosen said, because entitlement programs, such as Medicare, Medicaid and Social Security, have not had substantial reform.

The long-term forecast for the deficit illustrates this point.

Absent substantial reform, the Congressional Budget Office expects a few more years of short-term deficit decreases followed by bigger shortfalls in 10 and 20 years. Federal spending is projected to increase through 2039, so much so that by then the federal debt held by the public will reach a point only seen after World War II.

This chart from the Congressional Budget Office shows how the deficit is not expected to continue its downward trend in recent years.

A final word on Obama’s point from the experts.

The deficit has come down in recent years because of the strengthening economy, which drives tax revenues up, and the draw-down of various economic stimulus programs that were implemented to weather the financial crisis. Additionally, the expiration of 2 percent payroll tax cuts and increases in tax rates for high-income earners played a role, albeit a smaller one.

"It’s not clear one would want to view the evolution as relating to fiscal responsibility rather than an improving economy," Auerbach said.

Obama said since taking office the country has seen "our deficits cut by two-thirds."

His claim is accurate if you use 2009, his first year in office with an historically high deficit, as a starting point.

The claim ignores a stark reality about the deficits, however. The country’s spending is not expected to continue its downward route, according to federal forecasters, for factors that include increased interest payments on the debt and the lack of substantial policy changes for the country’s biggest programs, like Social Security and Medicare.

The deficits have largely come down as a result of the improved economy for which Obama cannot assume full credit.

WhiteHouse.gov, Remarks by the president in Michigan, Jan. 7, 2015