Sarah Silverman
stated on May 22, 2015 in a social media post:
Says Sen. Rand Paul, R-Ky., has stated that supporting the "right to health care ... means you believe in slavery."

Comedian Sarah Silverman’s liberal leanings are almost as well-known as her raunchy style. Her 2008 pro-Barack Obama video "The Great Schlep" attracted 2.2 million views on YouTube; a follow-up from 2012 attracted another 1.1 million views. 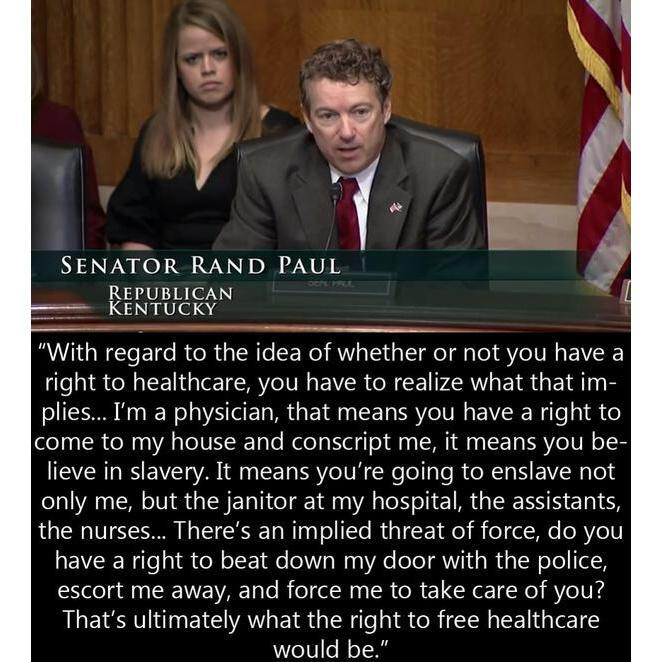 Recently, a reader forwarded us this shareable meme from Silverman’s feed at WhoSay, a social media site, that’s critical of presidential candidate and Sen. Rand Paul, R-Ky. The meme -- which Silverman had passed along from the Twitter account of actor Michael Sheen -- shows Paul seated at a congressional hearing. The meme purports to quote Paul equating the right to health care with slavery.

What do the facts say?

We were able to track down the source of the comments. They stem from a Senate Health, Education, Labor and Pensions subcommittee hearing on May 11, 2011. Paul’s unusual comparison attracted a flurry of media attention at the time, as well as sniping by Paul’s critics.

The meme shortened Paul’s comments to fit the available space, but the abridgement doesn’t strike us as twisting the gist of his comments.

"With regard to the idea of whether you have a right to health care, you have to realize what that implies. It’s not an abstraction. I’m a physician. That means you have a right to come to my house and conscript me. It means you believe in slavery. It means that you’re going to enslave not only me, but the janitor at my hospital, the person who cleans my office, the assistants who work in my office, the nurses.

A few days after the speech, the Association of American Physicians and Surgeons, a free-market group, posted a longer version of Paul’s speech on YouTube, suggesting that the next 30 seconds or so provided more nuance to Paul’s comments and had been overlooked by commentators. Here is the additional comment:

"Now just because it's a noble thing to believe that we are obligated as Christians, we are obligated to the Hippocratic Oath, we have always done this. Since the beginning of modern medicine we have always provided 100 percent access. I do it in exchange for privileges. I do it because I believe in the Hippocratic Oath. But my hospital also says to me you can only operate in this hospital if you agree to see everyone coming through the emergency room. I always have. People have always had 100 percent access to our emergency room. Those are for emergencies -- those are not the best place for primary care."

We don’t think Paul’s subsequent comments greatly change what he said earlier, since he’s saying he’s consenting to the servitude of treating non-paying patients as a condition of being allowed to practice at certain hospitals. In this comment, he still sees it as a burden to be borne.

In addition, Paul says he’s referring to emergency-room care, not to primary care. Primary care was the point of getting uninsured Americans covered under the Affordable Care Act, so they wouldn’t have to resort to going to emergency rooms for basic services.

Sen. Bernie Sanders, I-Vt. -- who, as it happens, is also running for president in 2016 -- used his perch as the chairman of the subcommittee to ask a witness, physician Dana Kraus, whether she felt like a "slave" working at her federally qualified health center.

"Could slaves free themselves by changing professions?" Welch wrote. "Do doctors in Switzerland get taken away at gunpoint? To treat the analogy with technical seriousness, even setting aside (as if you could) the colossal weight of America's most lasting shame, is to render it ridiculous, in my opinion."

We could not find an instance of Paul addressing these comments further, and Paul’s staff didn’t respond to a pair of inquiries.

Silverman forwarded a social media meme that said Paul has stated that supporting the "right to health care … means you believe in slavery."

The meme has been abridged from the full quote, but we see no significant change in his meaning. We also found no evidence that Paul had backtracked on the views he expressed.

We rate the meme’s claim True.

Senate Health, Education, Labor and Pensions Subcommittee on Primary Health and Aging, "Diverting Non-urgent Emergency Room Use: Can It Provide Better Care and Lower Costs?" May 11, 2011

Raw Story, "What would a presidential debate between Bernie Sanders and Rand Paul look like? Something like this," May 8, 2015

Association of American Physicians and Surgeons, "Missing footage: Rand Paul ‘Right to Healthcare’ would result in slavery for doctors," May 12, 2011