Viral image
stated on November 16, 2015 in posts on the Internet:
In Japan, "permanent residency is not given to Muslims," the "propagation of Islam" is banned, "one cannot import a Koran published in the Arabic language," and "Muslims cannot even rent a house."

Amid rising concerns about terrorist attacks by ISIS, we’ve seen an uptick in chain emails and viral images about Islam.

One viral image points to Japan as an example of a country that keeps out radical Islam by cracking down on all forms of Islam and its adherents, implying that this is a good model for the United States to follow.

The graphic is a simple black-and-white block of text with the headline, "Japan keeps Islam at bay by putting restrictions on Islam and ALL Muslims." The graphic then mentions a variety of ways in which Japan supposedly keeps tight control over the Muslims in its midst:

• "Permanent residency is not given to Muslims"

• "Propagation of Islam in Japan is banned"

• "In the University of Japan, Arabic or any Islamic language is not taught"

• "One cannot import a ‘Koran’ published in the Arabic language"

• "The Japanese government is of the opinion that Muslims are fundamentalist, and unwilling to change their Muslim laws"

• "Muslims cannot even rent a house in Japan"

• "There is no sharia law in Japan"

We wondered whether the graphic is accurate. To streamline our analysis, we focused mostly on these four claims -- that in Japan, "permanent residency is not given to Muslims," the "propagation of Islam" is banned, "one cannot import a Koran published in the Arabic language," and "Muslims cannot even rent a house."

Instagram posts
stated on September 22, 2020 in an Instagram post
Like Al-Qaeda and ISIS, Amy Coney Barrett has said her “end goal is to end the separation of church and state & build a ‘Kingdom of God’ in the United States.” 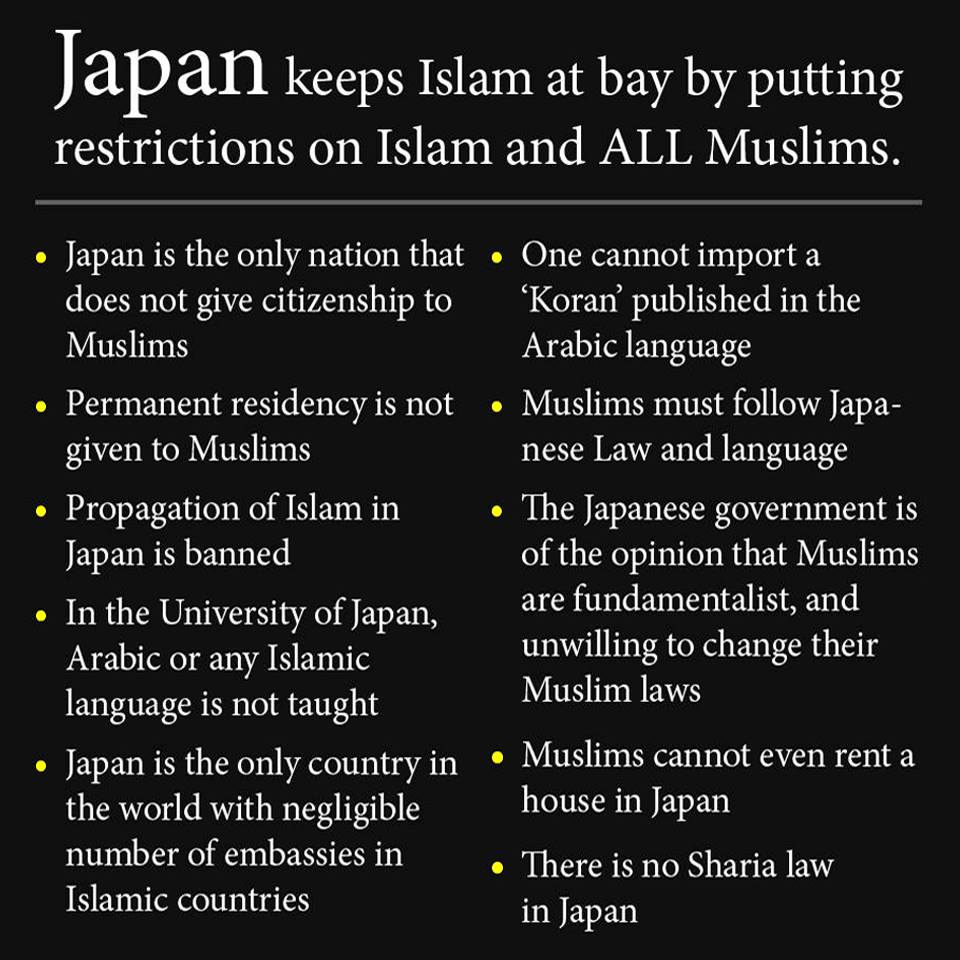 We heard back from three experts who have experience with the intersection of Japan and Islam, and all three said the graphic is blatantly incorrect.

"The chain email is nothing but malicious falsehood," said Kumiko Yagi, a professor at the Tokyo University of Foreign Studies Graduate School who has written extensively about Islam and other religions.

Kamada Shigeru, a professor of Islamic studies at the University of Tokyo, agreed, saying that all four of the claims we spotlighted are wrong.

He said Japan doesn’t discriminate in permanent residency on the basis of religion and that "propagation" of Islam is not banned. He added that the Koran or other religious books in Arabic can be imported.

As for renting a residence, he said there may be some reluctance among residents of Japan to rent apartments to foreigners as a general rule, but he said there’s no specific animus toward Muslims.

These four claims "are totally unfounded," said Glenda S. Roberts, a professor of cultural anthropology and Japanese studies at the graduate school of Asia-Pacific Studies at Waseda University in Tokyo. "It is disturbing that such an email is circulating," she added. "These claims are simply ridiculous."

Other claims in the graphic are easily debunked.

For instance, the graphic claims that "Japan is the only country in the world with a negligible number of embassies in Islamic countries." Yet a quick visit to the Japanese Ministry of Foreign Affairs’ website shows that Japan has embassies in such countries as Afghanistan, Bahrain, Iran, Iraq, Jordan, Kuwait, Lebanon, Oman, Qatar, Saudi Arabia, Syria, Turkey, the United Arab Emirates and Yemen, plus a permanent representative to the Palestinian Authority.

Meanwhile, there is nothing in Japanese nationality law that prevents Muslims from becoming naturalized citizens. The requirements concern length of residency, age, a history of "upright conduct," the ability to support oneself and a willingness to give up other nationalities. There is no mention of religion.

As for universities not teaching Arabic, we found that the Tokyo University of Foreign Studies does. Classes in Arabic are also taught at the Arabic Islamic Institute in Tokyo.

Last year, Japanese Prime Minister Shinzo Abe made clear Japan’s respect for people of the Islamic faith during an event with the Islamic diplomatic corps.

"I have found that a fundamental aspect of the spirit of Islam is harmony with and love for others," Abe said. "I believe therein lie points of commonality with the Japanese spirit, which is founded on co-existence."

The graphic says that in Japan, "permanent residency is not given to Muslims," the "propagation of Islam" is banned, "one cannot import a Koran published in the Arabic language," and "Muslims cannot even rent a house."

Each of these four statements is incorrect, and the overall point of the graphic -- that Japan keeps itself free from radical Islam by discriminating against all Muslims -- is dramatically off-base. We rate these claims Pants on Fire.

Politifact Rating:
Pants on Fire
In Japan, "permanent residency is not given to Muslims," the "propagation of Islam" is banned, "one cannot import a Koran published in the Arabic language," and "Muslims cannot even rent a house."
Viral image
Bloggers

Prime Minister of Japan and His Cabinet, "The Prime Minister Hosts the Iftar with the Islamic Diplomatic Corps in Japan," July 16, 2014

Email interview with Kamada Shigeru, professor of Islamic studies at the University of Tokyo, Nov. 16, 2015

Joe Biden
stated on September 18, 2020 a video in a tweet:
Says Donald Trump is “the worst jobs president in recorded history."

Joe Biden
stated on September 20, 2020 a speech in Philadelphia:
“There's no court session between now and the end of this election.”